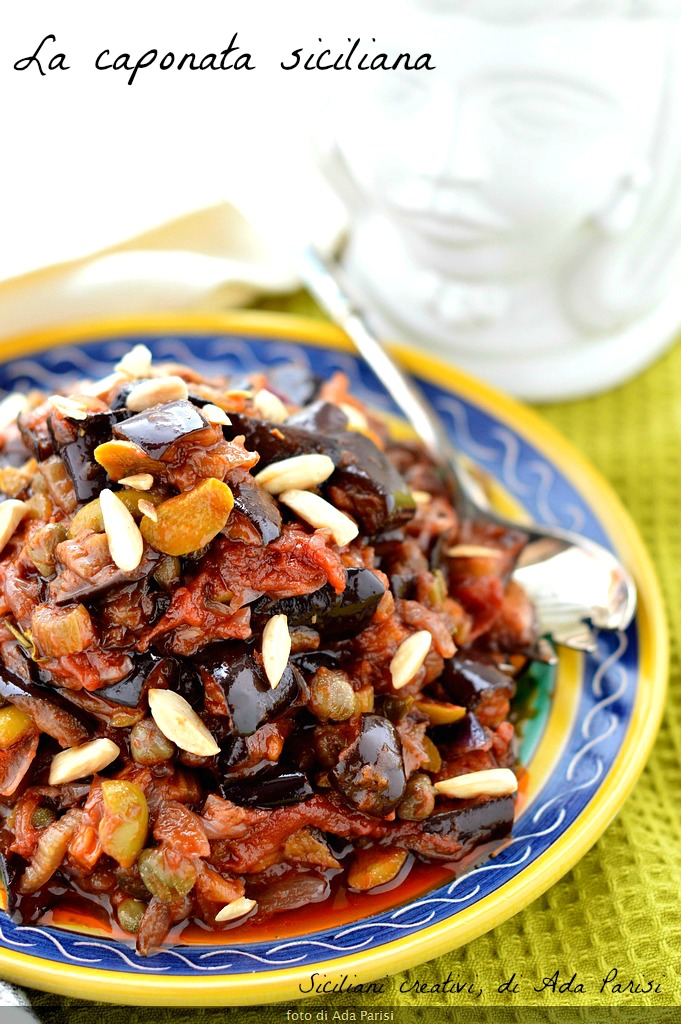 Introducing ' her Majesty’ the Sicilian caponata of eggplant: the caponata is one of the typical sicilian cuisine par excellence, but there are countless variants served on the boards of the island. Obviously, on my You Tube Channel you will also find the VIDEO RECEIVE STEP BY STEP. More or less vinegar, with or without pine nuts, There are those who will put us even the peppers. Vegetarian dish but rich and unique flavor, eggplant caponata is characterized dall'agrodolce. This is the variant of my family, the only one I really satisfies, so much so that I don't ever order restaurant caponata because rest invariably disappointed.

The eggplant caponata is a Starter respectfully, but if you want to use it as rich outline it's ideal with cutlets, meat or fish, But even with a simple straightforward swordfish, Grilled. I only recommend that you enjoy the aubergine caponata strictly cold, never hot or even warm. You can use red wine vinegar, as per Sicilian tradition or apples that is a bit’ more delicate, especially if you're not used to the sweet and sour sauce. Yet, I was advised of the possibility of blanch the celery before proceeding with the recipe. I do not do it because to prepare the caponata of eggplant I use only the heart of celery, tender. It has also been reported the use of tomato paste diluted with lukewarm water in place of the tomato pulp, take your pick.

Is’ instead a variant 'heretical', and therefore it can not be defined eggplant caponata to Palermo, one that also adds potatoes and / or peppers. Take a look also to all my SICILIAN RECIPES and of course all my RECIPES WITH EGGPLANT. Have a good day! 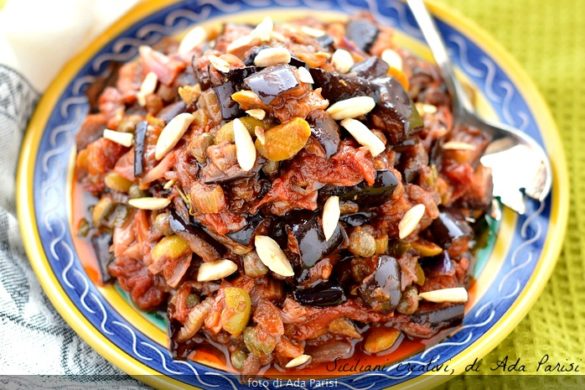 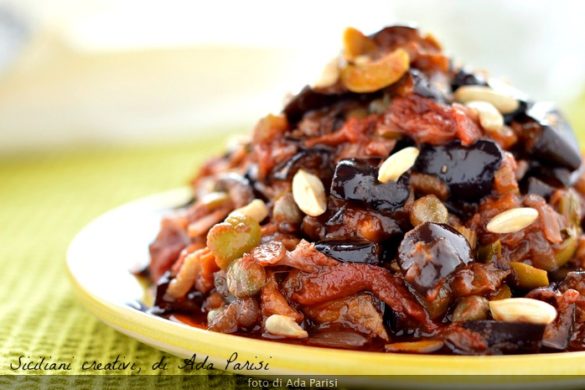 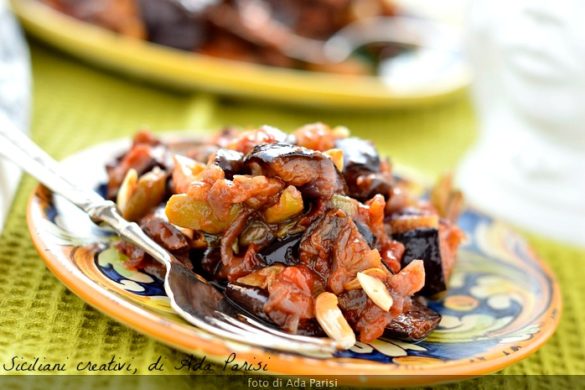 1 red onion, instead of Tropea

3 sticks of celery (only the heart, the more tender ribs)

Squeeze the eggplant and fry in peanut oil (or light olive, If you prefer) over medium heat, taking care to turn them every now and then: When the eggplants are golden, put them on absorbent paper to eliminate excess oil. 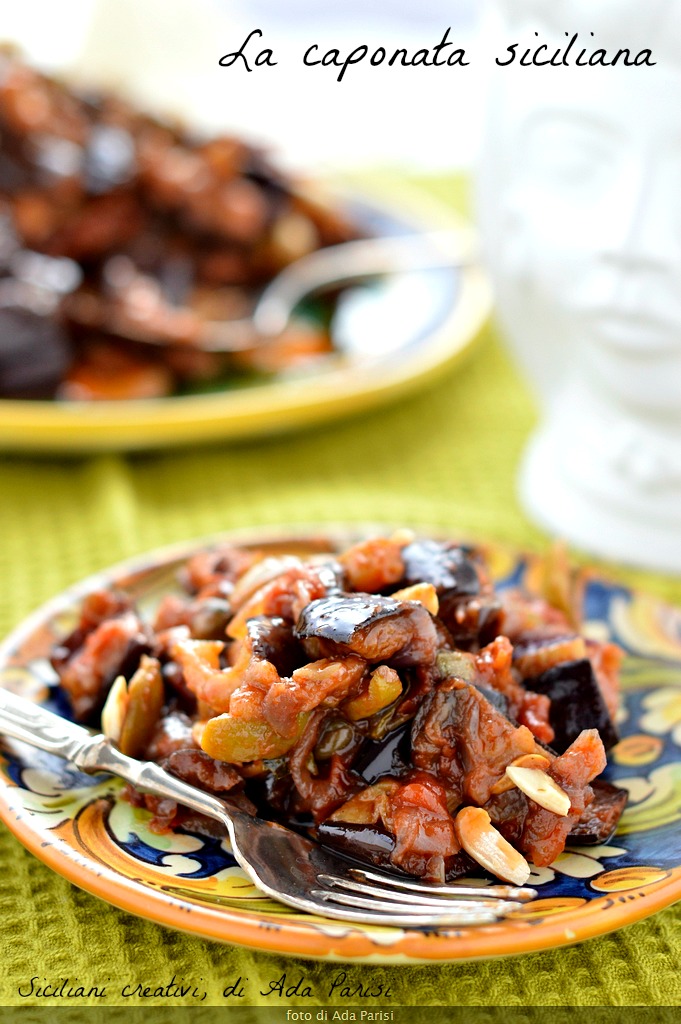 Slice the onion into pieces about half a centimeter celery, after having eliminated all filamentous parts. Put celery and onion in a pan with extra virgin olive oil and two tablespoons of water (so the vegetables do not burn) and Cook, over medium heat, until onions and celery will not become translucent (It will take about 10 minutes). Cut the olives into slices by eliminating the core. Unsasing capers under running water. Add the olives and capers to the sauce celery and onion, simmer two minutes and finally add the tomato. Season with salt. Cook the sauce for the caponata for 10 minutes.

Pour the vinegar and sugar into a glass and mix well so that the latter melts completely: raise the heat in the vegetables and pour the sweetened vinegar into it. Leave deglaze (you will no longer have to feel the pungent aroma of vinegar) and add the fried eggplant. 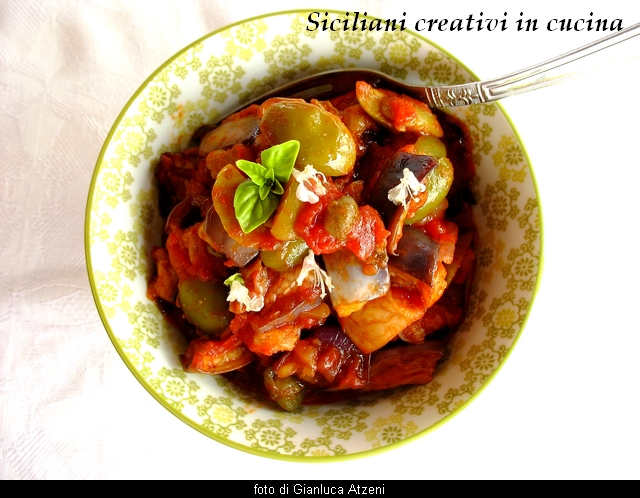 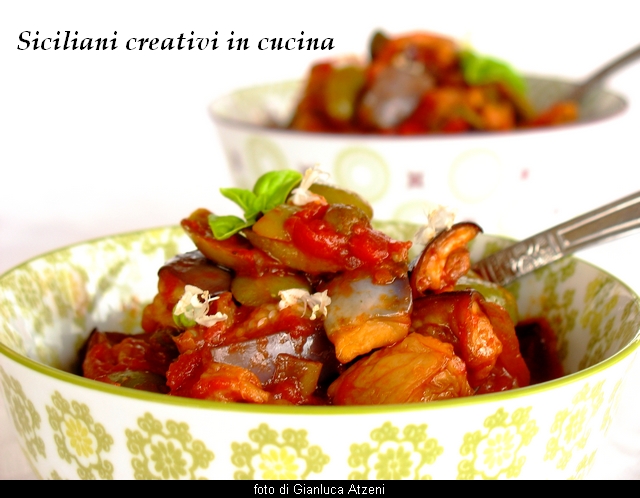 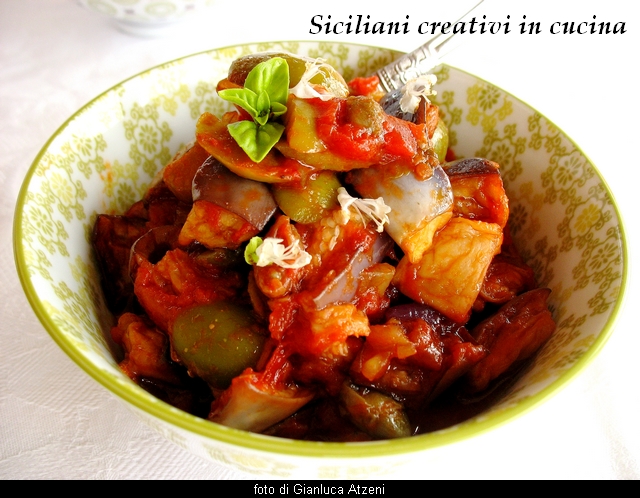 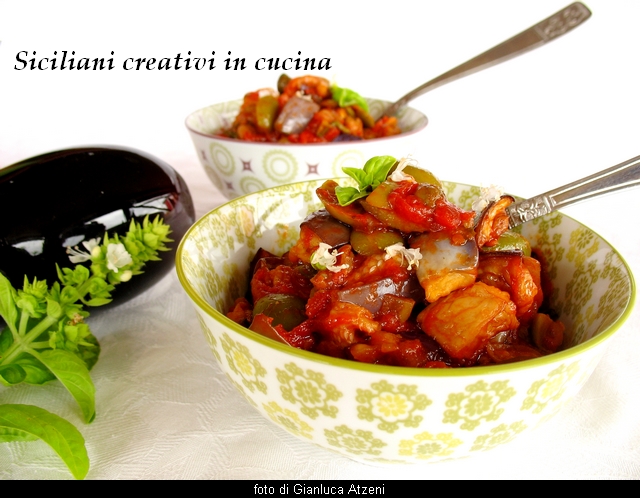 Remember that the caponata must NEVER be eaten hot and that all those restaurants, unfortunately also Sicilian, ve that the warm before serving mistaken. Taste it at room temperature and you have my blessing.

MATCHING: For this contour, which is more than a contour (rich, full-bodied, with the fried eggplant) we chose a Lacryma Christi del Vesuvio DOC rosé (Gelsorosa) produced by Cantine Villa Dora, in Terzigno, in the province of Naples. A fresh wine, with intense aromas of red fruits. We suggest a wine where the caponata not prevail vinegar taste. Otherwise, the alternative could be a beer of the pils type.

Fresh tomato sauce made in...

Thank you very much…

Brava, finally the one true recipe for Capnata Palermitana. My mom made her so and I do it strictly following the same recipe.
I have seen many variations on the internet that add peppers potatoes etc etc, not for me.
I found a recipe in a very old book in which you add the raisin. I have never tried, What do you think.
Thanks
Salvatore

Hello Savior, Thank you very much. This recipe is from my great grandmother, Palermo Doc. I tried once to put raisins and pine nuts, that are present in some variants, but it seems to me that there is an excess of sweetness. The thing, however, depends entirely on your taste, then you can safely try. A warm greeting, ADA

I feel compelled to thank. delicious Caponata, we brushed!

It is I who thank you for telling me, I am very pleased, eggplant caponata is a family recipe that I care very much. A warm greeting. ADA

ADA Hi, I've come in abundance; can I freeze it?

Hello Silvia. You certainly. With foresights: surgelala in airtight jars, keep in freezer up to 2 weeks and decongelala from the night before putting the jar in the refrigerator. A warm greeting, ADA

Hi Mirella, It is clear that you can try the Baked Eggplant, at maximum temperature, in a slightly greased with oil, putting the salt after cooking. I have never tried this procedure and I can't guarantee the result. The caponata, The Eggplant fried goes because frying causes caramelization of sugars, phenomenon that gives the taste sweet and just the right consistency to Eggplant. The mellow flavor of caponata is due precisely to this. In any case, se ti dovesse venire buona al forno, Let me know… saluti. ADA

I just finished eating it. It was really delicious, on the top I put a bit of parmiggiano….thanks for great recipe:-):-):-)

It’ a great news for me!! I’m really happy that you have made my recipe and that you liked!!! I never tried with parmigiano but I think it’s a good idea. Thanks for sharing this with me! ADA

Thank you so much for yet another version of “Caponata”
May I make a little remark: you propebly mean 1&1/2 cm., or one & a half cm. Coarse is more like 1&1/2 cm.
Fine 1/2 cm. Hope you don’t mind me saying this.
I love Italian food, have plenty of cook books.
Like your blog too. Congratulations & keep on cooking. Greetings, Annie

Hallo! Of course there is a mistake in the automatic translation…You have to obtain some touches of eggplant about an inch or an inch and a half on each side, just like the photo. Like some cubes that you have to fry…Thanks for your visit, I hope to see you again!!!

The Ratatouille and’ very good : now I also have the recipe ! Unproven !

Test test and tell me, You'll see that then we'll catch her taste and you too will vary according to your taste. Dear greetings

the Sicilian grandmother ale puts us even raisins. Is’ his invention or is there any truth to this addition?

As I write in the post is one of countless variants. In my opinion there should be (and also in the opinion of renowned chef) but the beauty of cooking is that you do it as best as you like, so viva raisins!!!

Congrats on your wonderful blog, I find it very pleasant and rich….
the articles are all interesting and engaging and amazing photos.
I will often, with extreme pleasure to look!!

But thanks!!! For photos around the compliments to my partner, I am denied…Is’ a pleasure to join your community…a warm hug, our Sicily, beloved.