The pan of Spain 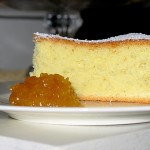 Ingredients for a 24 cm cake tin:

Preheat the oven at 180 degrees. In a very large bowl working the eggs with the sugar and the grated lemon peel until triple in volume the mixture, that will become white and fluffy. The ideal is to work it in a food processor, but you can also use an electric mixer, working the mixture at least 15 minutes. Finally, add the flour, stirring gently from top to bottom. Pour the mixture into a mold, preferably a hinge, well greased and floured butter. Bake at 180 degrees for 25 minutes. Worth try toothpicks, must get out from the cake dry. Then cool on a wire rack and use it as you like.

Dearest Ada hello. The size of the mold with these doses? So I set even if I were to halve. If anything bake 15 minutes instead of 20? then the toothpick decides…Thanks Hello Silvia

Hello Silvia, It depends on how high you want it. I use these doses for a 20-cm dish when I want it cut into three parts, by 24 cm if the cut in half and even lie in the baking pan 60 cm if I do a roll. It depends on what you need.

Hi Ada, a question: the egg whites should not be in the snow?

Hello Silvia, then, I take your comment to write better post on pan of Spain, that was a little’ long in the tooth. I now I follow the recipe you read, by Maurizio Santin, It plans to assemble everything long together and later add flour sifted. I added to the post that you can also follow the other method, but I verily I am fine so: to separate egg whites and yolks, the egg whites are whipped until glossy, some’ except in snow, otherwise the cake tends to crack in the Center. I must say that this method has never happened to me Sa and, Since I find it easier, I recommend it. Of course the trick is to beat the eggs for at least 20 minutes, should triple in volume. You can follow either method, I hope that now are well explained! ADA