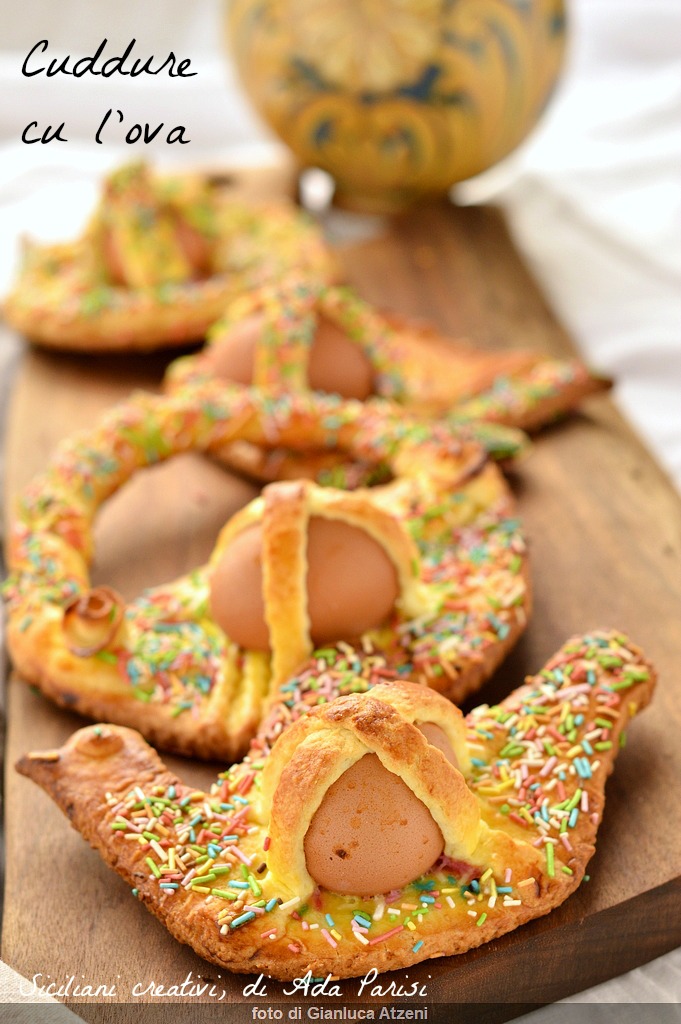 Pupi cu l’ova Pasquali also known as Sicilian cuddure. I didn't think I should thank #8217 the Coronavirus health emergency. But it is thanks to the fact that, like all of you, I'm locked in the house that I managed to prepare the puppies cu l’ova Easter, also called cuddure cu l’ova. And I also shot the VIDEO RECIPE STEP BY STEP. This is a typical Sicilian and traditional Easter dessert that I wanted to prepare for at least 6 years and that I never had time to do. According to tradition cuddures prepare for Easter and give themselves good Friday. The presence of eggs makes this sweet poor a highly symbolic sweet. Eggs are a symbol of rebirth and perfection. The colored sugar will attract irresistibly your children.

The Sicilian tradition of the Easter cuddure

Strictly made in house by hand, without the aid of molds (They are sometimes used to homemade cardboard silhouettes to cut out the shapes), the easter pupi cu l'ova or cuddure they also take different names depending on the areas of Sicily. In fact, in Palermo they are called “pupi cu l’ova” and they're often shaped like a man or a woman. Instead, Catania are called “aceddu cu l’ova” because they often have the shape of a bird, obviously a dove. In Messina “cuddureddi”, from Greek ‘kolluros (Crown)’ and are made of both shortbread and the same dough as the DINNER SANDWICHES, similar to a brioche.

Cuddura cu l'ova is a sweet based on an enriched shortcrust pastry: l’dough is made with lard instead of butter, as in SRICOTTA AND CHOCOLATE CRUMBS or in the zest of SICILIAN CANNOLI. Contains a good amount of milk, whole eggs and egg yolks. The result is a shortcrust and handy, that doesn't melt during processing precisely because it has lard and not butter. Is’ flavored with plenty of lemon zest and also has a pinch of yeast that makes it lighter and more fragrant. And it's long preserved.

between the most typical shapes, l’aceddu or dove, the bell that rings in celebration, woven baskets, the crowns, braids. Eggs should be inserted into ’dough strictly in odd number: you will never find a cuddura with 2 or 4 eggs but only with 1-3-5. This tradition is also present in Salento and in particular in leccese (that so many things have in common with Sicily, from dialect to kitchen), where they're called cuddhure or panaredde.

I had fun preparing them, trying to remember the shapes I saw when I was little. I took a trip to the memories, just on this Easter when I won't be able to be with my parents and my brother. And from now on my Easter won't just be PASTIERA NAPOLETANA, but also cuddura cu l’ova. Have a good day. 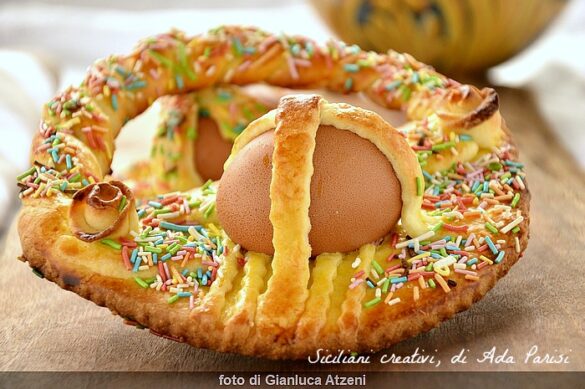 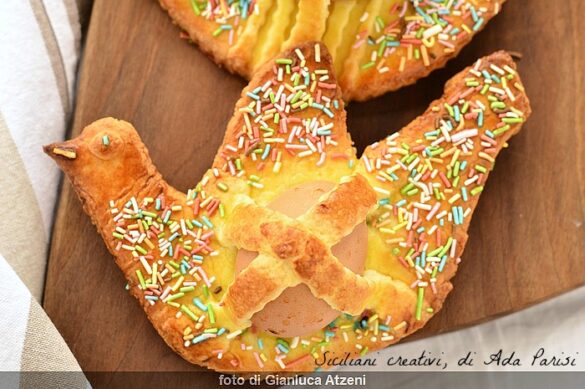 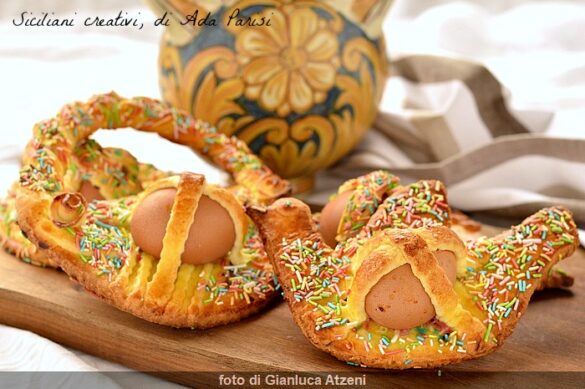 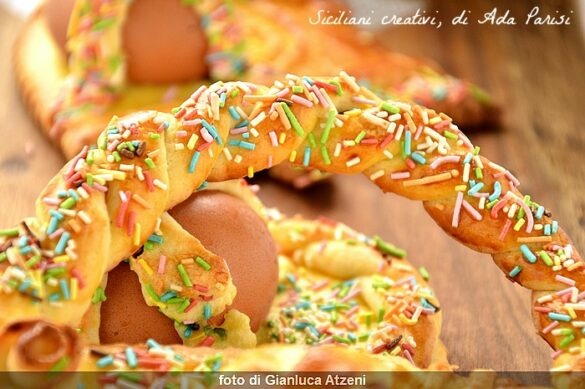 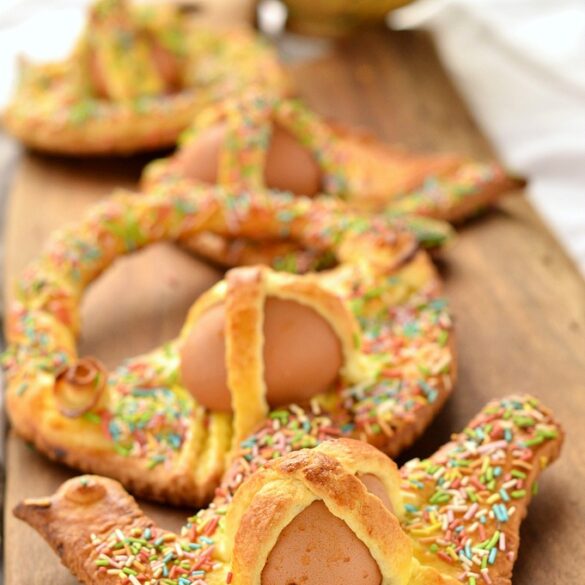 9 grams of baking powder (half a bag)

grated zest of an organic lemon and/or an orange First look at the VIDEO RECIPE STEP BY STEP on my YouTube channel. The preparation of the dough for sicilian pupu cu l'ova or cuddure is simple and fast, exactly as the pastry. Put the flour on the work surface, lard, the butter, Salt, sugar and citrus peel. Knead until a coarse dough, then add the eggs and as much milk as needed to get to a smooth dough, consistent and uniform. Wrap the panetto in the food film and store it in the refrigerator for an hour or until the panetto has shaved.

Boil the eggs until they are boiled and then cool them under running water. 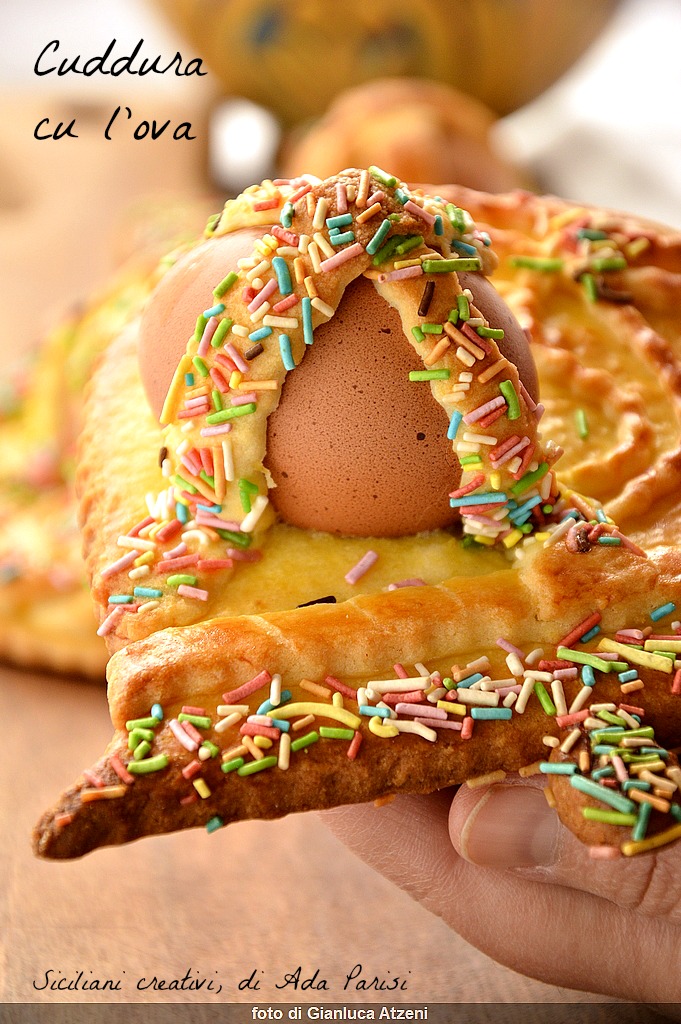 To achieve the different shaped cuddure, you must have a size pasta wheel, a knife and a rolling pin. I made the hand forms, as you see in VIDEO RECIPE STEP BY STEP, stretching the pastry on floured work surface with a rolling pin to a thickness of one centimeter and a half. There are very thick cudddure, but I prefer the thin and crispy.

Once you obtained a sheet, put it on one oven tray covered with parchment paper and engrave it on the surface with the tip of the knife to draw the shapes you see in the photos: the little bird I drew it freehand. For the basket I made a puck and cut it in half: the bottom has become the base of the basket and I got the rest of the strings then I twisted to make the handle. I also got the bell freehand. Once you have created forms, He engraved to decorate them with the tip of the knife and I finished every cuddura with dough strips.

Remember that the decoration is what makes the difference in this sweet poor, made with common ingredients, but the sleek and stunning form. You can then pick any number to create ribbons, flakes, flowers and other applications with the pastry. If you have ever worked clay, Das or salt dough, You not encounter any difficulties and you can have fun, even with your kids. 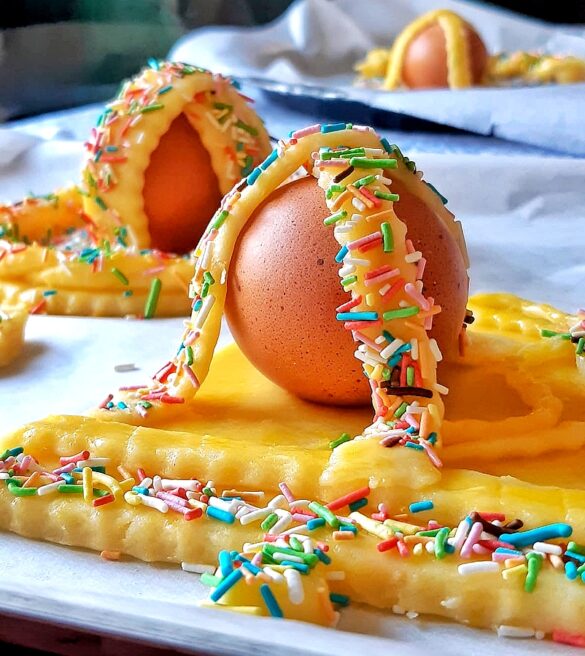 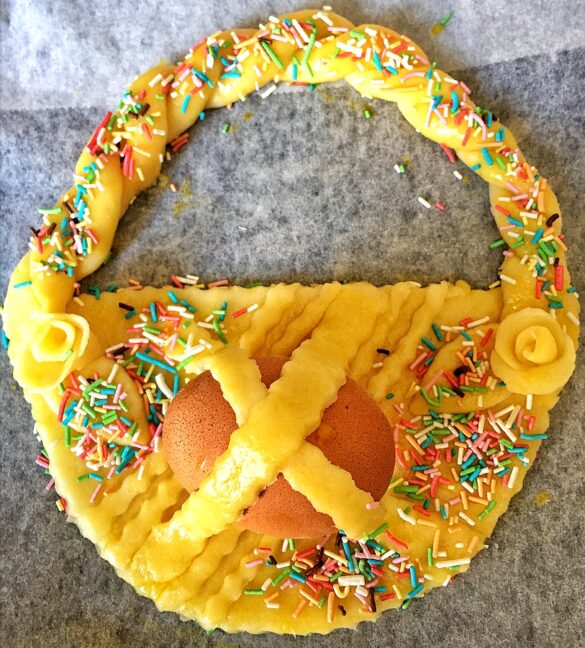 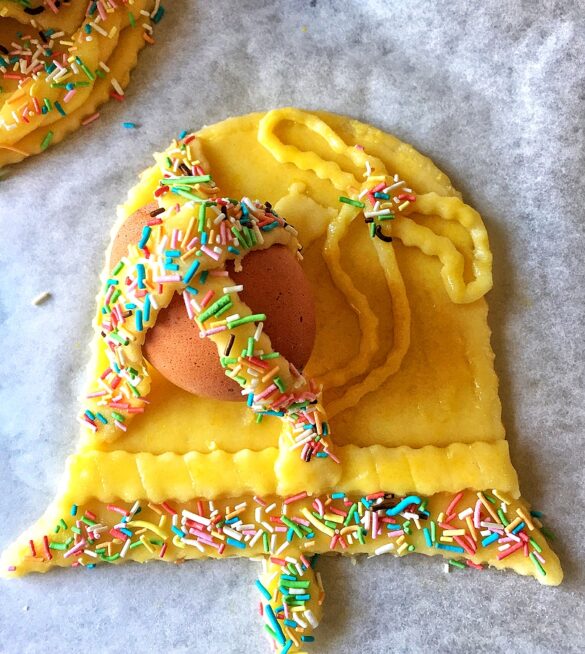 The eggs must simply be placed on the dough and then secured by two strings of dough. Once you've finished the shapes of the pupa cu l'ova, mix the yolk with an equal amount of milk and brush the cakes everywhere (except on the hard-boiled egg). Complete the Easter cuddure with colored sugar.

I suggest you re cuddure put in the refrigerator while the oven reaches the right temperature. Preheat the oven to 170 degrees static. Cuddure Bake for 20 minutes or until they are golden. The cooking times depend on both the magnitude of cuddura either by its thickness. Mine were pretty thin. Cuddure cu l'ova are perfectly preserved for 5-7 days if stored in a cool, dry place. 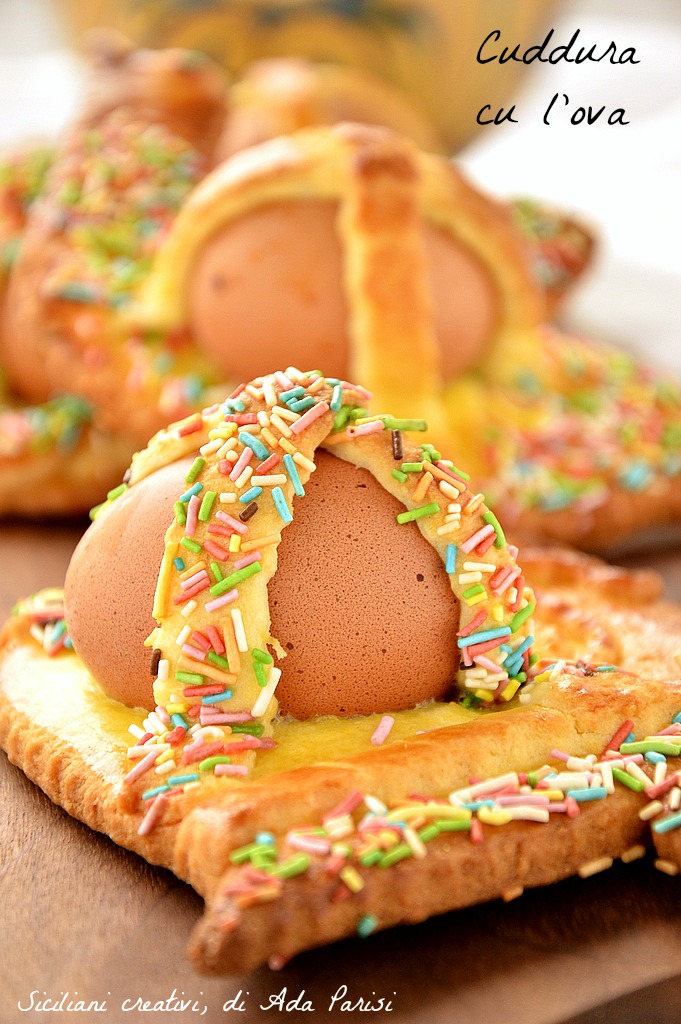 ADVICE: If you do not have a lot of dexterity and you do not feel able to derive the forms of hand cuddure, you can draw them on a sheet of paper or cardboard, cut out the shapes and place them on the pastry already stretched. In this way it will be sufficient to follow the shapes to obtain the forms you prefer.