Sicilian pepper with potatoes and eggplant

The perfect vegan side dish 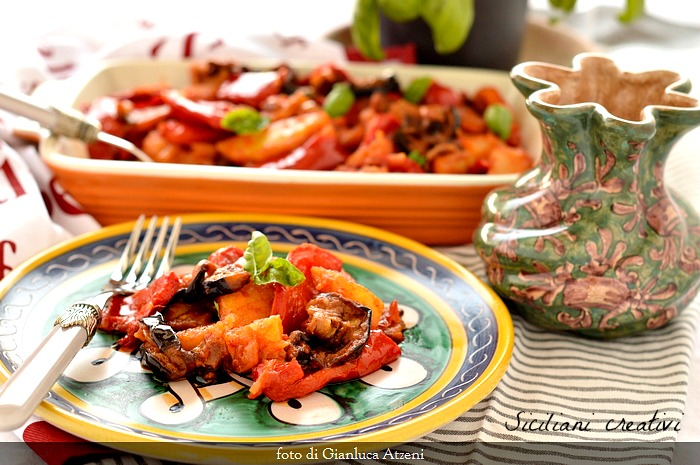 Sicilian pepper with potatoes and eggplant: today I'll tell you a summer dish of my childhood, or a typical Sicilian recipe and especially of the province of Messina: the Ratatouille ' heretic ', that is not only made with peppers, onions, potatoes and a bit of tomato, as the TRADITIONAL PEPERONATA, but with the addition of Eggplant, Obviously fried. It's a variation prevalent throughout Sicily and my mom prepares it so excelled. My Sicilian peppers will never come to taste the heights of his, as well as the EGGPLANT CAPONATA, which also you found here VIDEO RECIPE.

In any case, Sicilian pepper is a exceptional outline, is a vegetarian and vegan (Although not light) to prepare strictly with a few hours in advance and served cold, accompanied by a beautiful homemade bread, maybe made with Sicilian and covered with sesame seeds tumminia. You can serve it in every way: in individual serving cups during a buffet, What starter at a dinner with friends, What single dish in a more abundant portion or as a side dish for meat or fish. Need fresh basil, who here can not miss.

Sicilian pepper with potatoes and eggplant is one of the dishes of my childhood, when there were no diets and calorie counting to do. The Mediterranean flavors of eggplant, Peppers, potatoes, Basil and onion blend in a sweet taste and full, inimitable. Try it, I'll love you too. Take a look also to all my SICILIAN RECIPES and, if you like eggplant and peppers, my RECIPES WITH EGGPLANT and at RECIPES WITH PEPPERS. Hurry to try it, Have a nice day! 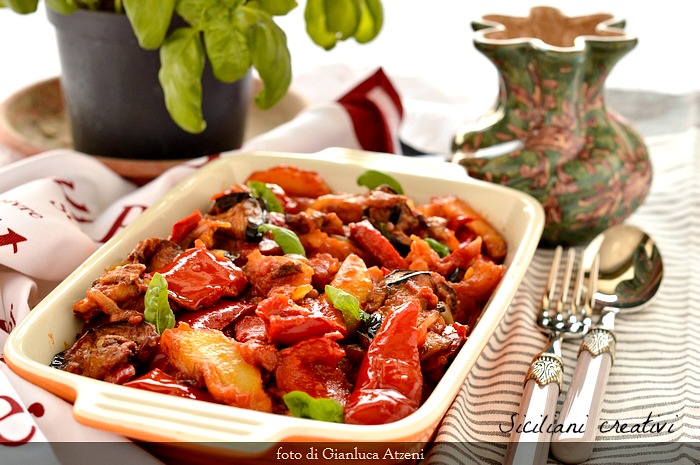 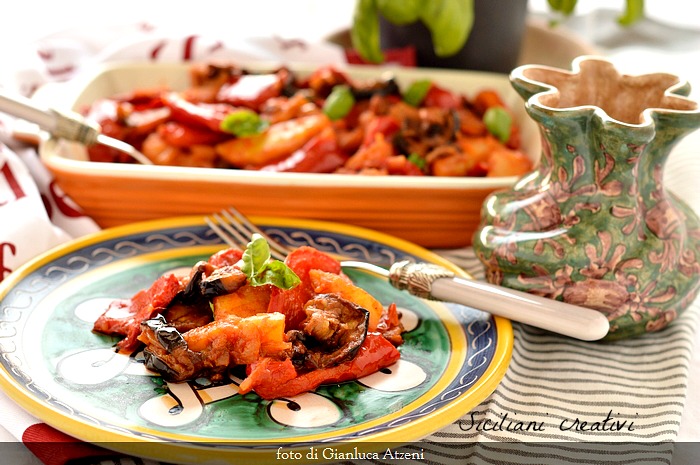 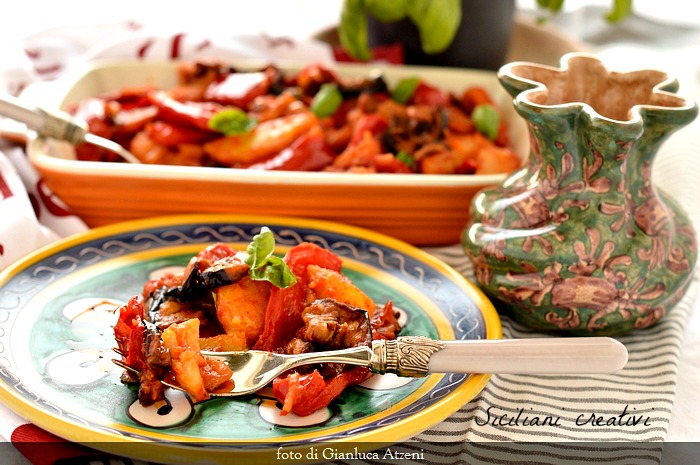 For the Sicilian peppers, with potatoes and eggplant, Clean the peppers removing the initial part, the final one, seeds and white filaments inside, then wash them and cut them into striped flaps or not too small. Clean the aubergines eliminating the tail, and the initial, wash and cut them in half lengthwise and then sliced not too thin: Salt them lightly and put them in a colander, blankets and with a weight on top, so they lose a bit of vegetation water. Wash the potatoes, Peel them, cut in half and then into quarters. Clean the onions and slice them, also in this case sliced not too thin.

We start from potatoes: put in a pan with some olive oil and Brown the potatoes, until they cooking: should be browned out and keep inside. I suggest you salt them immediately and, after they formed a golden crust, Cover and reduce heat to finish cooking, so that they cook with steam. Once ready, put them aside.

Fry the eggplant in olive oil or vegetable oil (at a temperature of not less than 162 degrees) and set aside.

In a saucepan put the onion and a clove of garlic and brown them in olive oil over low heat, until the onion is golden. Combine the peppers, season with salt, pepper and cook over high heat for 10 minutes, then add the tomato puree or crushed tomatoes, lower the heat and continue cooking until the peppers are tender and the sauce not restricted. Add the peppers with basil broken hands, potatoes and eggplant.

Mix everything well and sauté over low heat for 5 minutes, then turn off the heat. Pour the Sicilian peppers in a baking dish and let stand until completely cooled. If you want, You can store it in the refrigerator, covered with plastic wrap, for a couple of days. In any case, before serving the Sicilian peppers, leave it at room temperature for at least half an hour. Bon appétit!

OPTIONS: The traditional peppers are sweet and sour peppers and contains only, onions, red wine vinegar, extra virgin olive oil, salt and sugar. This is the original version Palermo. Though, As in all recipes, there are numerous variants: Many add the potatoes only, others even eggplants. But I tasted stewed peppers also made with zucchini and carrots.

MATCHING: Try this Ratatouille with beer Vicerè Sicilian brewery Tari (in Modica). An unpasteurized and unfiltered white beer, with aromas of tropical fruit and banana, very refreshing, light and pleasant.

A question about eggplants: how long before you should put them on “Cry”?
Thank you and congratulations to the site.

Hello Angel, welcome and thank you from the heart. It takes half an hour. Now today the aubergines no longer have that bitter tip that forced them to purge, I suggest you only do it when you have to fry because so it eliminates water and frying is better. Let me know.

These are precisely those recipes that taste like yours that I adore!
As you Adina dear??

Thank You Helen. I'm fine. I embrace you.