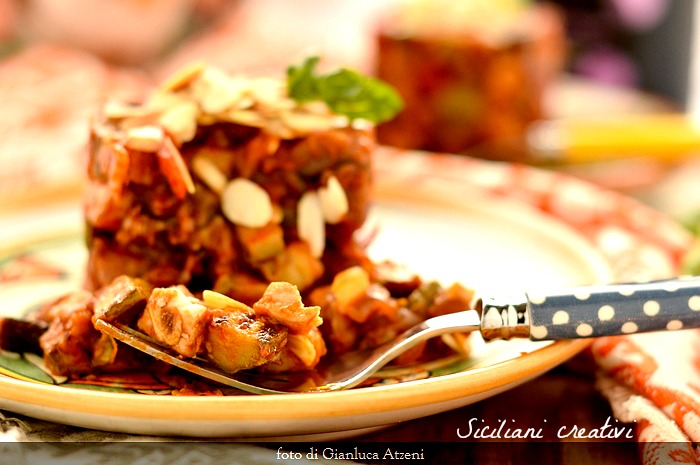 Today we prepare Swordfish Sicilian caponata, a variation of the traditional eggplant caponata, Queen of Sicilian cuisine. You can serve swordfish caponata as a starter, but also as a main dish along with a salad. The prepared one day in advance, put it in the fridge and don't think about it anymore until you eat it. That fish marries well with the bittersweet tell the same origins of caponata, whose name derives from the capone (the Dolphin fish), a blue fish much used in Sicily that was preparing its sweet and sour with vegetables.

I tell you now that the Sicilian tradition requires that you face as a normal caponata, by adding cubes of swordfish sauteed in olive oil. If you want to make you so have a look at the recipe CAPONATA TRADITIONAL AUBERGINES SICILY and add the swordfish. But a few weeks ago, during a trip home, my mother took me to a restaurant in Giardini Naxos where I ate a very light caponata swordfish, not only made with Eggplant, But even with Zucchini and peppers. I decided to prepare this dish in my own way, Using Eggplant, Zucchini and peppers with normal bed of caponata made with celery, Onion, Capers, olives and tomato, adding very little vinegar and lots of toasted almonds.

The alternatives with swordfish

I suggest you, concerning swordfish, also try SWORD FISH AT A greedy MESSINESE, the FISH SWORD TO BAIN MESSINESE, the delicious BAKED SICILIAN SWORDFISH, the SWORDFISH ROLLS TO MESSINESE and the CHOPS SWORD FISH IN TOMATO SAUCE. Is, if you like the recipes with Swordfish (which it belongs to the family of blue fish) Also have a look at all my RECIPES WITH BLUE FISH and of course all my SICILIAN RECIPES.

I've been thinking a lot about this dish because I had been asked to prepare a recipe to match with a very special wine, the Müller Thurgau, brut version, produced by Casa vitivinicola Fazio, in Erice: It is not easy to match a wine with a sweet and sour dish due to the presence of vinegar. In this case the amount of vinegar is minimal and the oiliness of the sauce and fat softness swordfish prevail as the main gustatory notes. This sparkling wine manages to balance the elements of the recipe, with its delicate floral notes, a fine, persistent and elegant, and with its dry taste and clean. 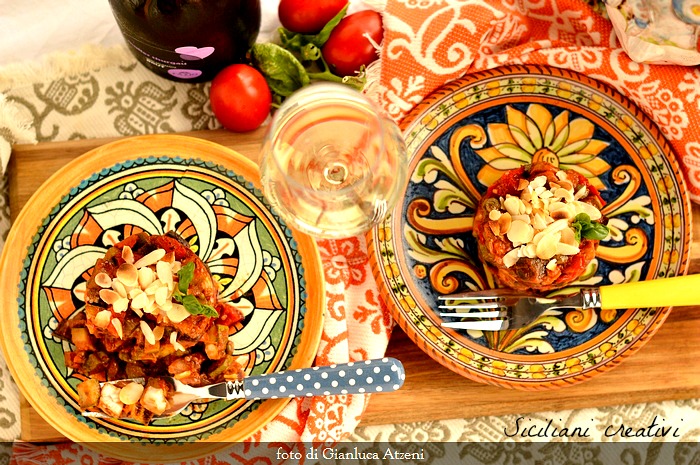 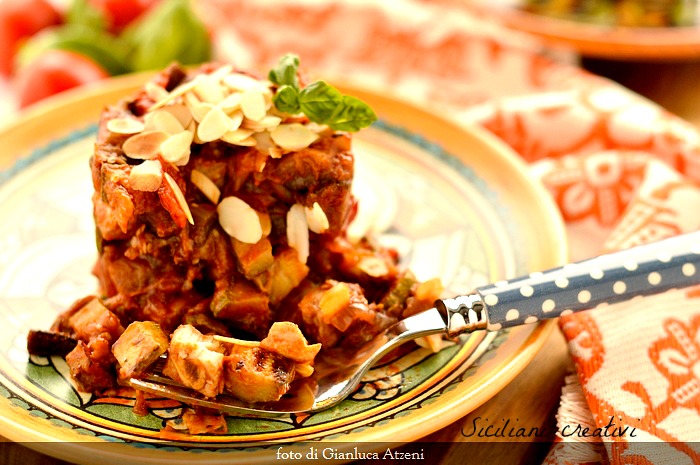 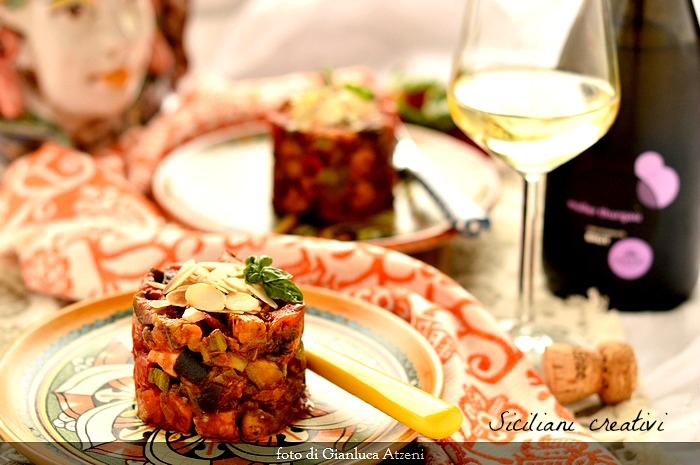 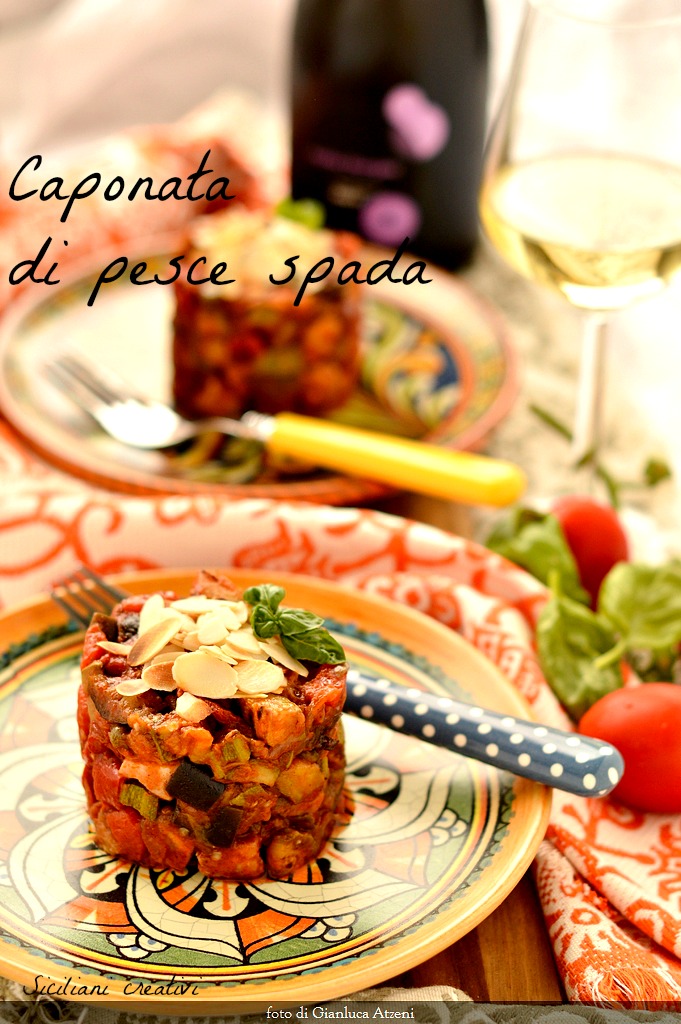 To prepare the swordfish caponata, First Wash celery, Eggplant, Zucchini and peppers. Clean the vegetables and chop the celery, sliced not too thin, Zucchini, The eggplant in cubes and the peppers into strips. Slice the onions. Stone the olives and cut into slices.

The vegetables are sauteed separately, because they have different cooking times. I recommend you cook for the last peppers, Why blush the rest of vegetables.

Once you put aside the Eggplant, proceed the same way with Zucchini (Here the cooking themes are minimal) and finally with peppers.

When all vegetables are cooked, put in cold in the pan a little extra virgin olive oil, celery, the onion and two or three tablespoons of cold water: Cook over medium heat until the vegetables are not become translucent, then add the capers, the chili and olives. Cook for 2 minutes and add the tomatoes. Season with salt and pepper and cook for 5 minutes. Pour the vinegar into a glass and add sugar, mix well and pour over the onion mixture, celery and tomato: do soften over low heat until you feel the smell of vinegar, then add all the previously cooked vegetables, stir and set aside.

Cut the swordfish in strips and then into cubes and sauté in a little olive oil for a minute. Season with salt and pepper and add to vegetables. Mix well and pour the caponata of swordfish in a bowl: allow to cool completely. I recommend you prepare it one day in advance, so that the flavors to better harmonize. Keep the swordfish caponata in the fridge and remember that the caponata is always served at room temperature, never hot. Before serving, lightly toast the sliced ​​almonds and garnish with almonds swordfish caponata. Bon appétit!

Prepare the swordfish with caponata one day in advance, so that the flavors can blend and can be enjoyed the best.

Beautiful! Are in Panarea the I will have to try.

Hi purple that envy! I Love Panarea, are you enjoying? The Aeolian Islands are a magical place… caponata of swordfish you should find it, but I suggest you try the pasta alla Eoliana, swordfish chops and of course the desserts typical of the island! A warm greeting! And thanks, ADA