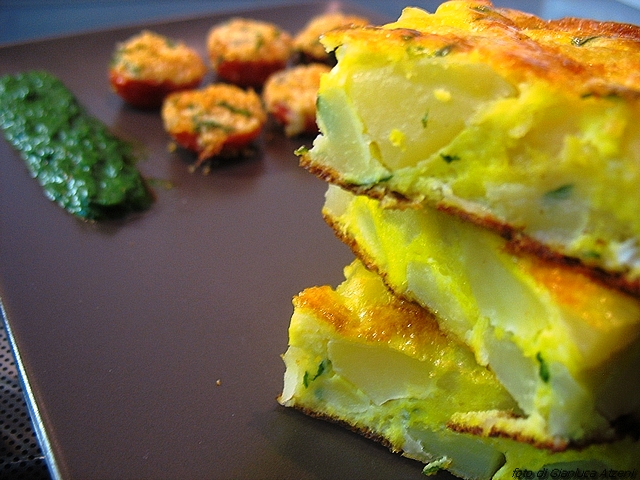 Omelet Yes, but in the oven. I don't want to sell it as a recipe for ' light ': always potatoes, Onion, egg and cheese there are, but it is certainly lighter than the classic ' frittatona to Fantozzi's. The potatoes rather than fry the sick in a pan, blankets, with oil and a little bit of water. The outline is a must, even for a contrast of colors: easy tomato baked Potatoe. The green stripe? A spinach puree, the iron is always good…

for the green stripe

Preheat the oven to 200 degrees. Let's first outline: wash the tomatoes and cut them in half. In a bowl mix the breadcrumbs, the capers and chopped parsley, a pinch of salt and a tablespoon of oil, mixing everything with care. Arrange the tomatoes on a baking sheet covered with parchment paper, baste them with a little olive oil and put on each a little compound. Bake and cook for about 30 minutes, until they are browned.

Let the frittata: wash and peel the potatoes and cut them into regular cubes of about 2 cm. In a pan put oil to heat, Add potatoes, mix to coat evenly with oil and cover. Cook for about 10 minutes over medium-low heat, adding a little hot water in case you ' dry’ Too much. Add thinly sliced onion and Cook, always covered, for another 5 minutes and still until the potatoes will be tender and soft onion.

Meanwhile put the eggs in a large bowl, chopped parsley, the milk, the parmesan and season with salt and pepper: Whisk with a fork until the mixture is homogeneous. Add the potatoes, stirring well and place in a baking pan lined with parchment paper not very big and oiled, so that the omelette is pretty high.

Bake for about 15 minutes or until the omelette appears golden brown. For the green belt put the spinach in a saucepan with oil and salt and Cook, over a low heat and covered, for 10 minutes: move everything to the mixer with a little’ of oil if the mixture is not soft enough. To serve arrange the tomatoes on one side, near a ' swiping’ spinach and alongside the omelette cut into ' squares '.

THE PAIRING: with the omelet baked potatoes with tomatoes au gratin suggest a match with a wine of Sardinia, a white: Nuragus Doc of cantine di Dolianova. A fragrant wine, fruity, with a slight acidity that goes well with eggs and with the acidity of the tomato Gratin.

Sicilian Brioches (those with Tuppo)

Mizzica boys, I get the bavette! I am going now to do this your recipe, using the stove! ;-) Have a good day!!!!

The wood burning stove? Gorgeous…will be very good, Let us know!!! I have my partner's parents in Sardinia…another story ... a warm greeting

a delicacy !!!! bravissini!! I wait with other proposals, also already posted. no need to reissue…so look for good!!!
thanks and a hug

Thank you, As always…a hug and good continuation of your wonderful contest!