The Sardinian ceramic Walter Usai: between tradition and innovation 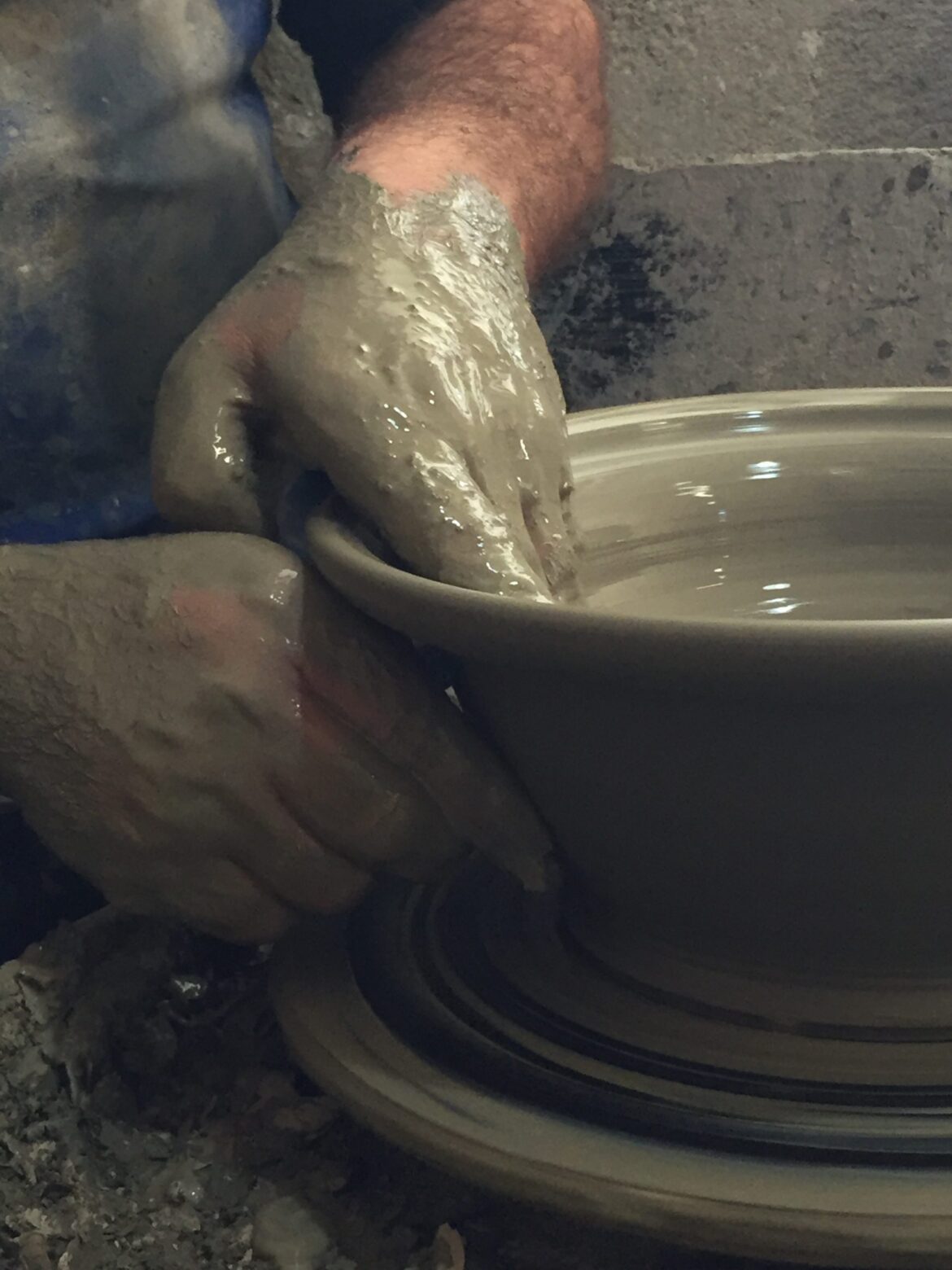 The Sardinian ceramic After Walter It is a work in progress: in his laboratory he has always hovering between the purest Sardinian tradition and innovation that goes through a rigorous minimalism shapes and the gleam of pure colors, almost liquid. Walter is a ceramist by fate and by choice: Assemini, a small town in the hinterland of Cagliari, continues his father's work Elvio and Efisio grandfather.

From his hands, today, out furniture and objects that bring the story of Sardinian ceramics around the world, beyond the sea, in distant lands like Japan or Australia. The blue eyes of Walter sees far, beyond the traditional Sardinian clay of which he knows every secret. They see a future projected towards modernity. Watching him work is a privilege: watch the VIDEO shot in his laboratory Assemini. But do not be fooled by the apparent ease with which Walter creates its objects. 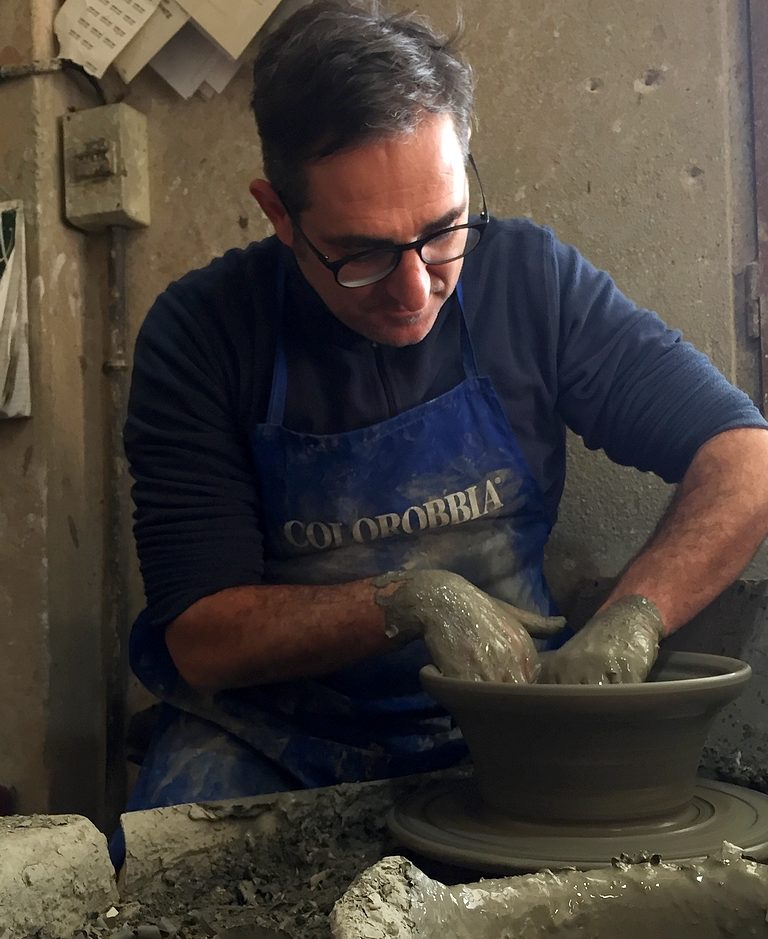 Entering the lab you see is part of the exhibition is to work: the clay, from Tuscany, lying in a corner. Apparently she died, a gray and inert matter, but in the hands of Walter – with the help of water – becomes a living creature, soft and yielding: the lathe expands, it's getting larger, gets up. It seems that breaths. With a few touches Walter is a decoration on the edge of a “xivedda”, the terracotta bowl in which you knead bread. Then he affects a lapwing on a bottom “freguera”, the terracotta bowl where it traditionally does SARDINIAN FREGULA (watch the VIDEO production of fregula). Finally, creates a wonderful “Pitcher in the wind” or one of the sumptuous “Pitchers Bride”, daughters of the purest tradition of Sardinian ceramics. 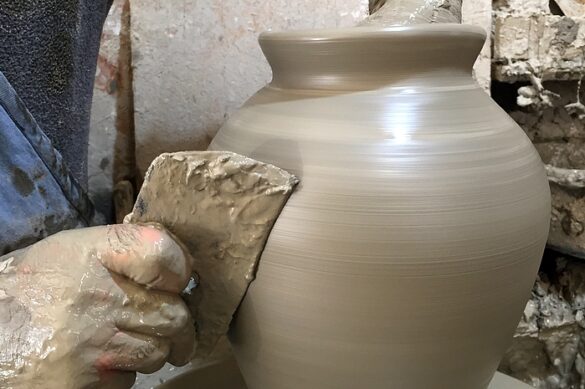 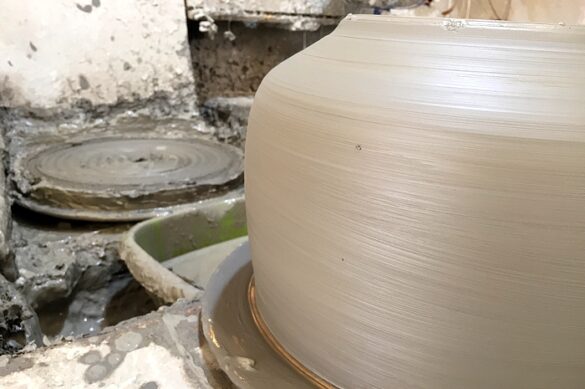 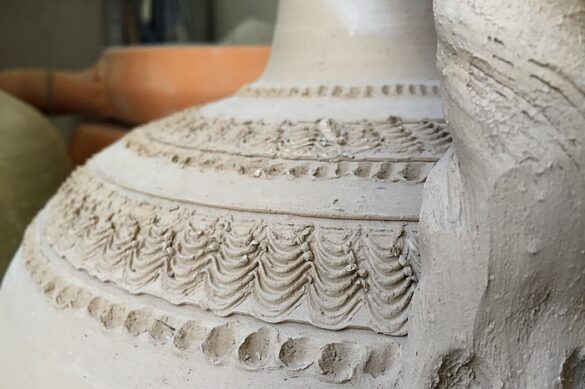 The talent of Walter does not stop at decorating: There are hand-drawn objects free (He says he likes to paint not, but we did not believe at all). There is the choice of daring and brilliant colors for modern ceramics, or creating original forms of dishes or coffee made services on request.

The 80% of what is produced today in the ceramic laboratory Usai of Assemini is made to order: which is not to say that we produce only large sets of dishes for special occasions, but also a simple xivedda terracotta request by an elderly locals to prepare, as they did in ancient times, fregula or bread for the week. Despite Walter's love for minimalist and modern ceramics, Today the most sold are still the pitcher of the bride and freguera. Two of the most traditional objects of the history of Sardinian ceramics. 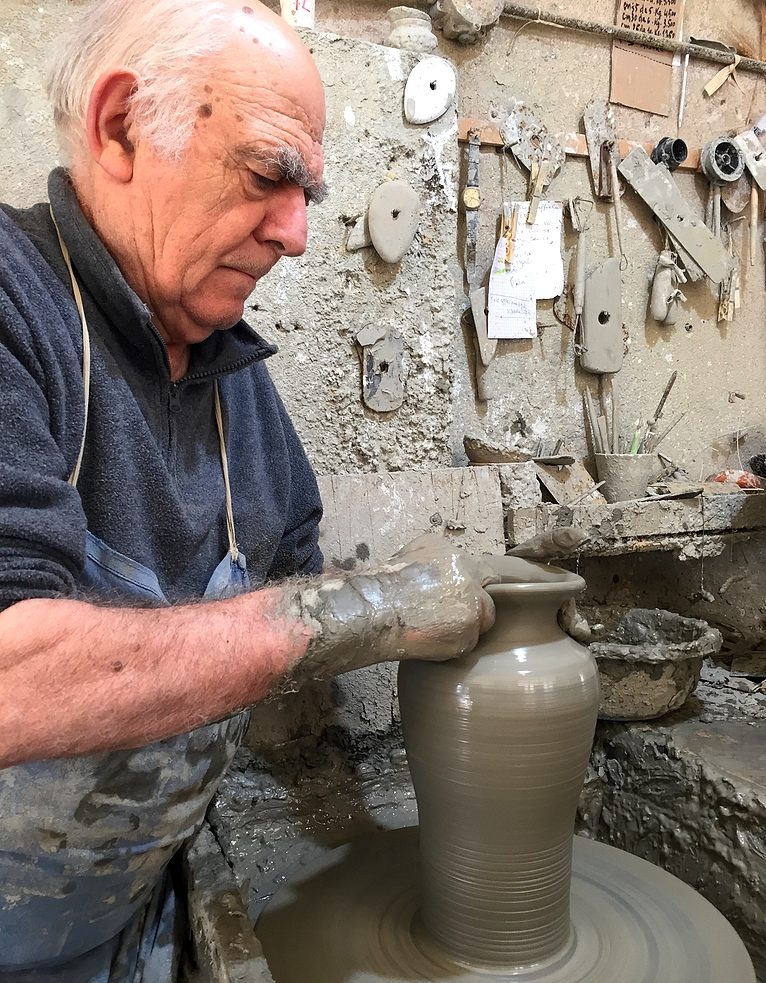 Elvio I used to work

It is not uncommon to find in the laboratory of Walter's father Elvio, that far from his own clay ovens and can not stay, although he says that now the laboratory is given to Walter. In the prime of his Elvio activities he could make 800 ceramic pieces a week, working 7 days out of 7 and was one of the best potters of Assemini and beyond. Today he sold the shop to his son, despite pretend to have pulled the oars, It is still a fundamental presence. His experience and the stories he tells, as well as the playful bickering with Walter, I am one of the reasons why to visit the laboratory. 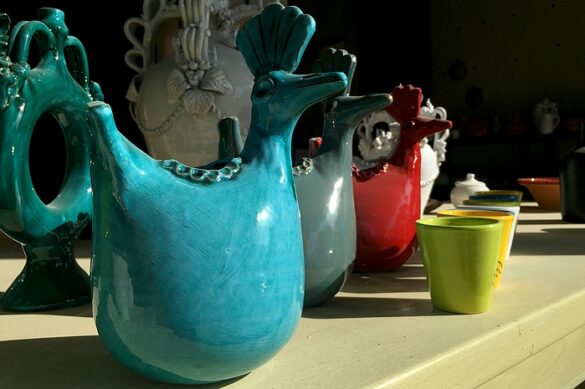 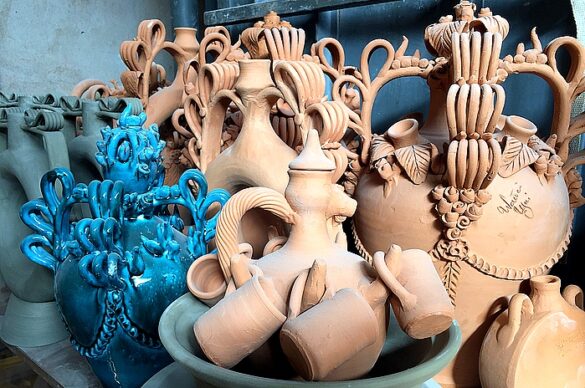 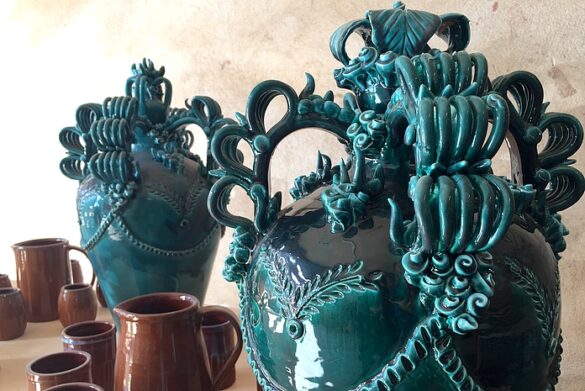 Forni, large and impressive, They are always lit.. Day and night. Over 800 degrees of temperature to bake the ceramic slowly, to fix the colors, to make it eternal. Today there are timers, regulating the temperature of ovens. But once you had to check every hour, and getting up in the night, More and more times, to verify that the temperature was the correct one.

In time, Walter moved forms and concepts of traditional Sardinian ceramic towards a more modern interpretation, minimalist and Spartan. The patterns become less rich and more fluid, almost ornamental cuts. The colors change and triumphs monochrome: They have bright colors, brilliant, different from usual. An extraordinary alternation of the most beautiful Pantone Color, opaque or enamelled: spicy green, reds, cobalt blue, purple and lime green. The forms are simplified: from traditional hen to hen pourer, pitcher from the bride to the wind pitcher. The splendid annular amphorae become leaner and with decorations volute less heavy. The names remain in Sardinian: farce, Stan Giada, xivedda, freguera: Sardinian tradition is renewed in a contemporary style. 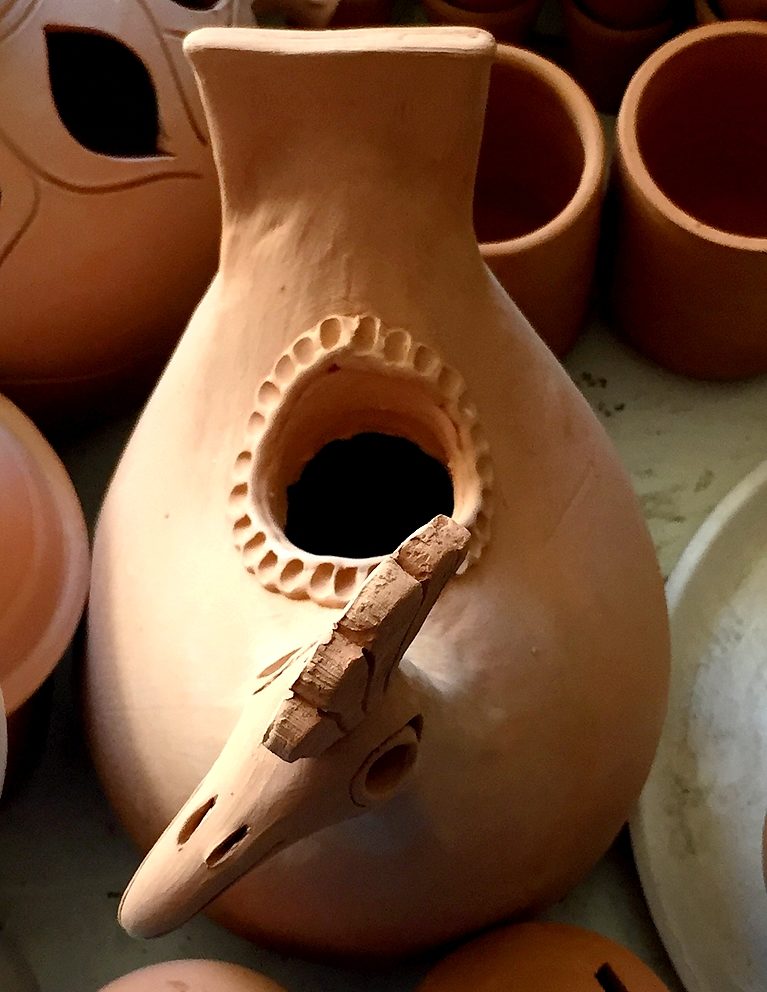 All Sardinian pottery coming out of the hands of Walter Usai is shaped on a lathe, as you can see in the VIDEO. From raw clay, the object comes to life turning quickly between the fingers of the potter. There are molds and each piece is different from the other. On the form they are always performed by hand decorations: that are graffiti or overlapping decorations, it is impossible to find two identical objects.

Assemini, small town in Cagliari, It has historically specialized in ceramic production, whereas for ceramic means the terracotta modeled on a lathe. The ceramics shops are numerous and the family tradition is renewed from generation to generation yet. Although times change and those shops that until the nineties were 17, They are now just seven. Four craftsmen are still working on a lathe, others are decorators or purchase semi-finished product and decorate it or lean people working on a lathe. Who works ceramics are aged between 40 and 50 years, some even several years more and it is difficult, if not impossible, find an apprentice, someone who wants to really learn this art that requires love and sacrifice. Also because the selling prices of ceramics in Sardinia are not those of the rest of Italy. They are lower. 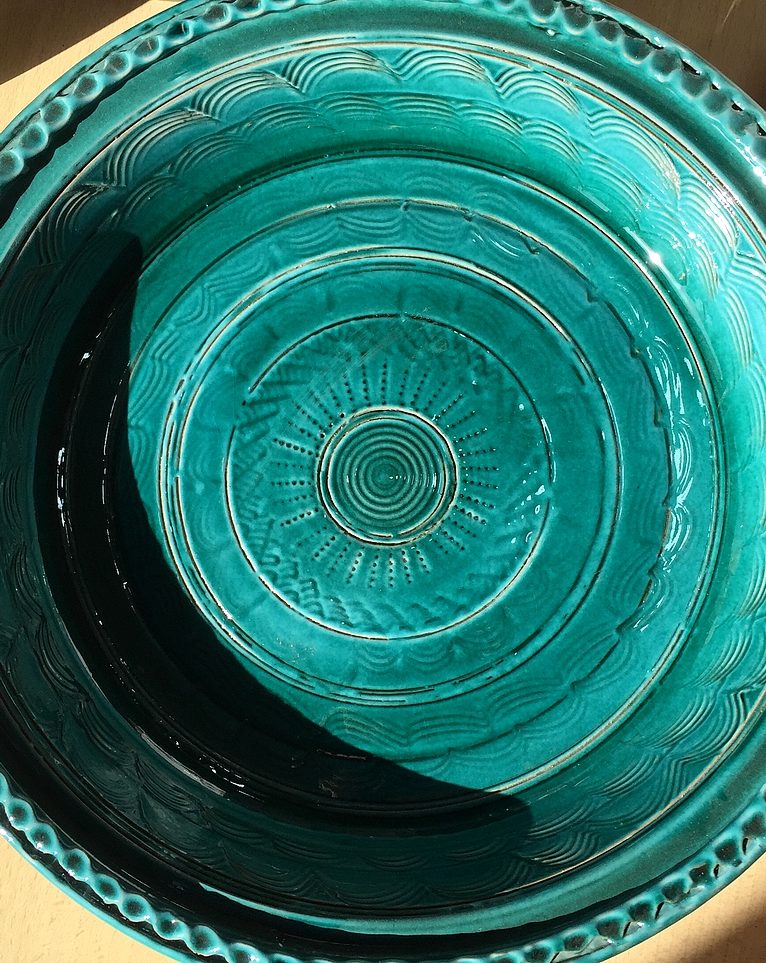 the freguera, where do the Sardinian fregula

But the Sardinian pottery, like that of Walter Usai is not done only in Assemini. On the island are the various producing centers: Dorgali Siniscola until Oristano and Sassari. All share the use of clay as a raw material, modeled on a lathe or a mold, and the use of traditional motifs and colors. A world to discover.

Made in Italy. Messina and the...

Olive oil: we learn to read...