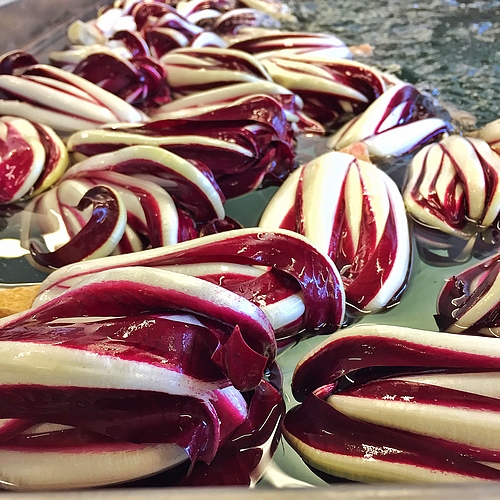 Today I will tell late red radicchio di Treviso IGP, one of the products that best represent agriculture Treviso, wonderful synthesis between man and nature, called “flower winter”, He grew between the chill and the water of Sele. I know, you're already thinking: but what it does, He tells a salad? Let's say that the definition of 'salad’ the PGI radicchio lies close, and with this article and the video of the production cycle, I hope to explain clearly why. Meanwhile, it is a vegetable that too few really know, both as regards the modalities of production, both as regards its virtues salutistiche. To see first-hand how it is grown, we went to Quinto di Treviso from Farm Trento, that since the seventies produce radicchio IGP. And today is one of the most specialized companies in this type of production.

The company has an integrated supply chain: annually selects the roots that are planted in the greenhouse: the plant blooms and so you get the best seeds that will be used for the following year. In my guide the young and enterprising Alessandro, who with his two uncles and Paul Lino manages eleven hectares let you work each year more than 800 tons of product. The company, founded by Alfonso Trento, thanks to the foresight of Alexander, It is currently the only one in Italy to market late red chicory Igpanche on line. It will come right to your door in refrigerated boxes of 2 or 3 pounds, ready to be tasted. In the video below, posted on my You Tube Channel (to which you can subscribe), you can see the entire production process, now I explain point by point

Alessandro was kind enough to dedicate one Sunday accompanying me through fields, cells and tanks, to explain in detail this extraordinary product. The Treviso red radicchio can bear the European mark Protected Geographical Indication (PGI). And it is regulated by a precise specification and protected by a consortium of manufacturers, the Red radicchio di Treviso IGP Consortium and the variegated radicchio from Castelfranco IGP.

The origins of the red radicchio di Treviso IGP

There are two fundamental elements for the late red radicchio di Treviso IGP: the water, decisive for the steady growth of the red late, get rich plains from the Alps through the springs sources of the River Sile. The other ingredient is the cold: Typical winter temperatures, around zero, They are essential for a correct development of the plant. This red vegetables, elegant, crisp and sweet, the kitchen is really versatile. Famous risotto with radicchio, it is also perfect in the oven, for pasta, in jams to accompany blue cheeses, as cooked or raw contour, as an ingredient in savory pies and savory quiches. 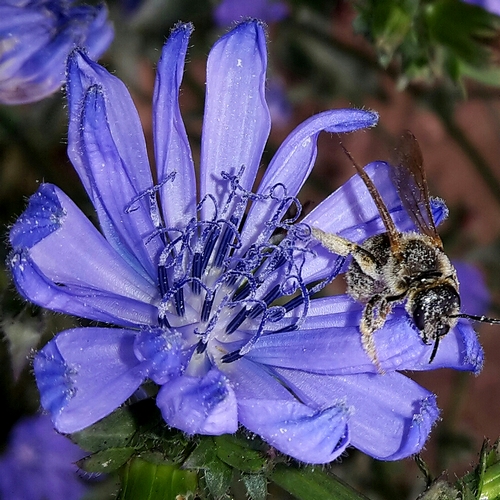 From the botanical point of view, late red radicchio di Treviso IGP originates from the native strain of Cichorium intybus, the common chicory's characteristic blue flowers. The plant, that grows wild in the East, It was introduced in Europe around the fifteenth century, as early as the sixteenth century, It was grown in Veneto and especially in Treviso. Over the last two centuries, the plant has been the subject of careful work of selection and crossings, until the definition of the disciplinary production of PGI. 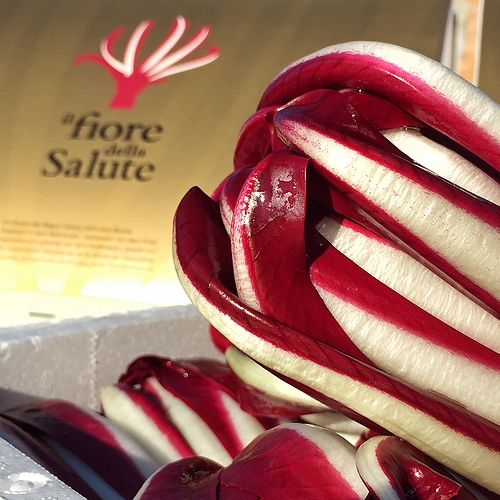 The red radicchio PGI (as well as the variety of early radicchio) It has remarkable cleansing properties, diuretic, tonic and laxative properties due to its particular composition. It prevents aging and bowel cancer and has a strong anti-oxidant effect. It contains a high amount of water (approximately 92-94%), has just 23 calories per hundred grams and fibers present also have the property of retaining blood sugars. For this reason it is recommended to patients with type 2 diabetes. The detoxifying and purifying effect was evidenced by a slightly bitter aftertaste and rich content of minerals (potassium, magnesium, phosphorus, sodium, iron, copper, football, zinc, manganese), Amari principle, sugars, amino acids (arginine, phenylalanine, threonine, methionine, isoleucina, istidina, leucine, lysine, tryptophan, valine) and vitamins (In, B1, B2, B3, B5, B6, C, Is, K e J). The red color is a sign of the presence of anthocyanins, polyphenols with anti-inflammatory properties, allergy and antiviral. What prevents (together all'inulina contained in the leaves) cardiovascular disease and in particular coronary heart disease. In short, the definition of “Health Flower” It is very apt. 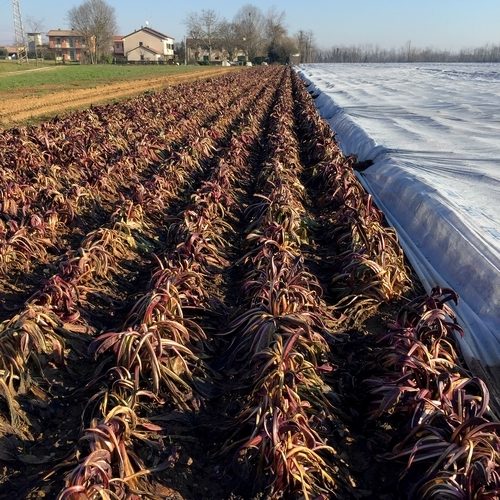 radicchio fields in the Treviso IGP

Sowing the radicchio di Treviso IGP it is strictly carried out in the areas indicated by the disciplinary Protected Geographical Indication established by the disciplinary, between 20 and 25 July and ends in August. The technique used is that of the transplant, because the results are better than that to seed. Each plant is inserted into the ground in a mechanical way, plant by plant. The sowing work is finished by human hands. The plant should be watered almost every day, because its roots are in need of a big hydration. 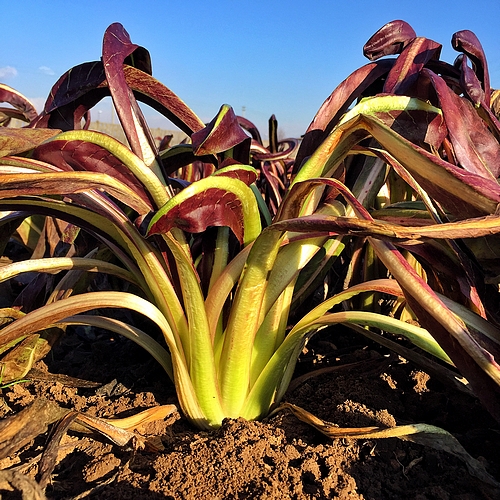 At seeding, It follows the phase of hoeing, necessary to weed out the herbs that can damage the smooth growth of the plant and to aerate and move the earth, so the radishes grow healthy. The soil in which they are grown radicchio every two years is put at rest and made to rotate with the alternating sowing barley or corn, allowing you to return to the land necessary nutrients. 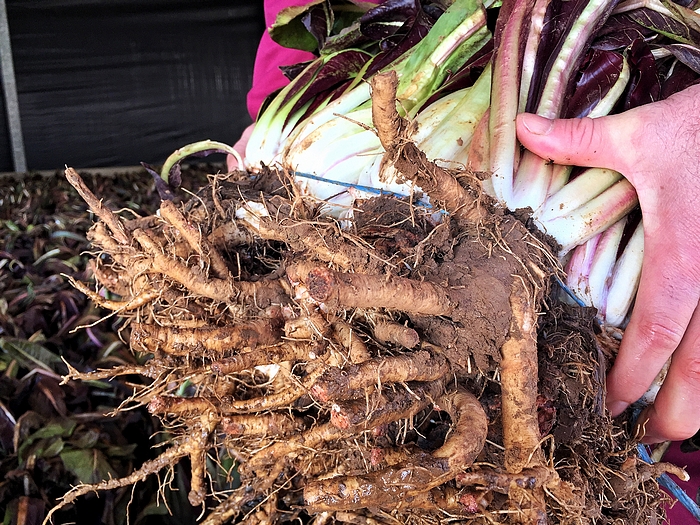 The collection of radicchio kicks off in October and ends in early February. Each plant is capable of producing a single radicchio. According to the information of the product specification, two frosts in order to gather a radicchio are needed that can boast the IGP. This is because the cold and frost stimulate the growth of the inner part, the heart, which will become that beautiful radicchio then eat. Compared to the plant that is collected in the field, In fact, only the heart is edible, while all the scrap parts serve as fertilizer for fields. The harvesting machine cuts the plant to 15 centimeters and lifts off the ground. The workers collect it and release it manually from a first layer of mud, then deposit the vegetables in a basket and, then, in a large refrigerator at a temperature of zero degrees. 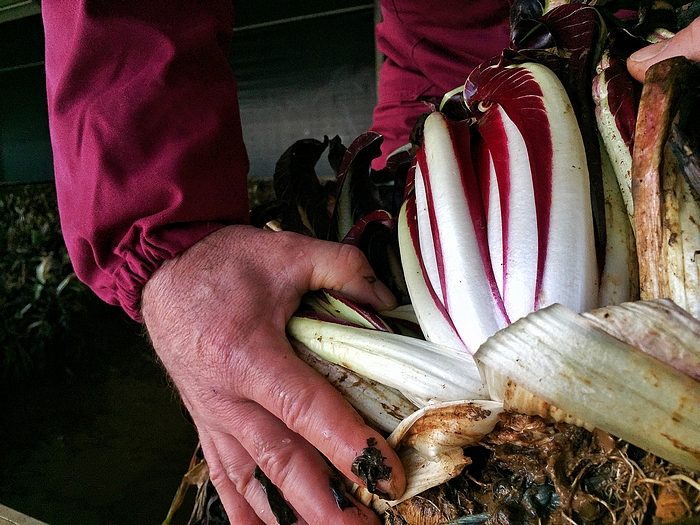 Cleaned up from the ground and tied in bundles, radicchio then crosses the crucial moment: the passage in the tanks bleaching, where current flows resurgent water from the river Sile, very rich in minerals, drawn to more than two hundred meters deep. The roots of the plant are immersed in water, at a constant temperature of 14-15 degrees. The radish is kept in the dark for 15-20 days. The darkness is necessary so that the plant does not face photosynthesis, otherwise it would become the green leaves and the bitter taste. Remember that more is red radicchio PGI, sweeter. During the bleaching, after twenty days in water, the roots have grown and have become white. The heart of the plant, initially small, he has grown.

After the bleaching, radicchio immediately worked. The cleanup is the manual removal of the outer leaves, until leaving only the heart, that occurs in its typical compact form, closed apex and tied to the base by a root portion which is carved, always at hand, cleanse it from the rhizomes. The chicory is then washed in running water of the river Sile, It is left to drain and placed in polystyrene cages. At this point, It will be distributed to restaurateurs, supermarkets, markets or come directly to the customer's home thanks to shop on line.

Mussels made in Sardinia by...

Made in Italy. The caciocavallo of...