Potato and fennel soup with toast with Pecorino sardo Dop 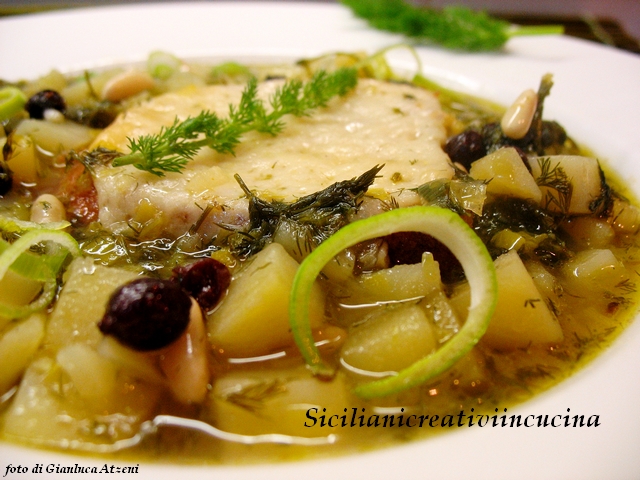 I could call this dish's soup with sardines at sea '. But let's go with order: to my amazement and obvious joy I found, during an outing in the countryside of Rieti, the wild fennel. I collected everything I could find and I started to hatch’ my recipe. Pasta with sardines, I immediately thought of, but no because I already made and posted. Then I decided to make a soup between Sicily and Sardinia, as in Sardinian fennel island (fenùgu) is widely used. What gave birth to my dirty mind? Wild fennel and potato soup, with leeks, garlic and fresh onion, with anchovies, pine nuts and raisins (Sicily) and toasted bread with pecorino cheese Dop (Sardinia). Not for me to say, but it was fragrant and good, good, good!

Finely chop fresh garlic, leek and onion and stew them in oil over low heat for about 10 minutes, joining if you need a little warm water, until they are wilted, then add the fillets of anchovies crushing them with a fork so that you disfino. Meanwhile, Wash the fennel (set aside 4 peaks for the decoration of the dish) and clean it by removing the stems that are too hard, then chop and add to the mixture.

Wash, peel, then dice the potatoes and put them in the soup, adding pine nuts and raisins. Season with salt and pepper and cover the vegetables with hot water: cook for 30 minutes over low heat.

While the soup is cooking, preheat the oven to 200 degrees, arrange the bread slices on a baking tray and distributed over the cheese into slices: put the bread in the oven to brown until the cheese has melted creating a golden crust. Serve the boiling soup putting at the center of the plate a slice of bread and cheese and pouring the soup. Garnish with some washer leek and some top of fennel.

THE PAIRING: We stay in Sardinia to best match this soup. We chose Iselis white, produced by Cantine Argiolas, with Nasco and Vermentino grapes. Is’ a wine with intense aromas of yellow flowers and tropical fruit, equally suitable for this fragrant soup. The taste is soft, balanced, with a very intense finish.

this dish is fantastic Simplify!!!!! Sometimes they give me the wild fennel, and I find it difficult to use them all but now I will know’ what to do. Vist!!!!!!

hello Mimma! Lucky you that you give them…I ride rural countryside in the hope of finding!

More than a soup is a true wonder…grazieeeee!!! A big hug!

Thank you, Your contest theme is really beautiful…I only regret that when I went for a walk I had no gloves and had to leave the nettles to their fate!!!! Look, tomorrow I send you another recipe! A hug, ADA

How many perfumes in this dish…and how many ingredients that I love, from wild fennel..
A hug !

Thanks girls!!! I really like the comparison with the 'brood'… in fact this recipe I have made their own thought and savored, I'm so happy that you appreciate! A hug to Elena, Mary e Adele. thanks Helena, I’m so happy that you like it!!

Here in my area I find many hinojos I prefer this recipe, I may always vary from Granada to the Spanish style.. Thank you very much!!

and you “covato” pr0prio great !!! I bravissima imagine the scent…I know the fennel !!!

you always have great ideas Ada! I see you down there, countrified hen hatching her recipe / ouva gold! :-) really beautiful

Thank you for the share, this seem delicious and would love to try it soon :)

Thanks a lot! Let me know if you like it!!