Not just yachts and exclusive clubs, private beaches and hotels dear. A holiday in Costa Smeralda, as long as there are scraps the right map and make choices, You can also do in August. And without spending a fortune. Mine was a five-day trip: from Cagliari, I arrived in the North East of Sardinia, in the heart of the Emerald Coast, and then I moved to the region of Ogliastra, an area proud, with food and places to excellence postcard, not just on the coasts but also inside. Understanding that I suggest you organize in Sardinia a trip in June, July or September, avoid August because the island is invaded by tourists from around the world, This August I spent 5 wonderful days in this corner of Sardinia.

I decided to stay in Arzachena, because it is less than 10 kilometres from the beautiful sea around Porto Cervo and because in this slightly hilly and there are many highly detailed indoor accommodation, where the summer heat is tempered by air flying over the hills. I couldn't start my tour in Gallura without a close encounter with one of his products Prince: Vermentino di Gallura white wine. So I made a quick stop at wineries Surrau Arzachena, an example of entrepreneurship that combined modernity and tradition in the production of this white wine, vermentino, now among the most sold throughout Italy. Managed by the brothers De Muro, also holders of an important company in the construction sector, the winery produces 300 000 bottles, produced in about 50 acres. Inside, In addition to art exhibitions and Conference Hall, also a wine bar opposite the vineyards, where you can try different combinations with the typical products of the territory and a wine shop where you can also buy some ' goodies’ of Sardinian.

As I was saying, the Emerald Coast is not only sea: the area is, as the whole island, guardian of important archaeological sites of nuragic Nuraghe and pre, that in Italy represent an unicum. Just 5 km from the cellars Surrau lies the mighty Albucciu Nuraghe, from the rectangular structure sub, leaning to one side on a single block of granite: the ancient inhabitants of the island have indeed built the nuraghe exploiting naturally occurring granite in the area and I guarantee you still admire this building is a magnificent experience. Two other megalithic sites not to be missed are the majestic giants of Coddu Ecchiu and the nuraghic village The Prisgiona, all within walking distance from the nuraghe Albucciu and well indicated on the roads. I didn't have time to see them, But let me point out two other Giants ' graves: those of Moru and Li Lolghi, In addition to the Li Muri necropolis which preserves Neolithic Temple Malchittu and the grandiose funerary circles, a sacred building of the nuraghic period. 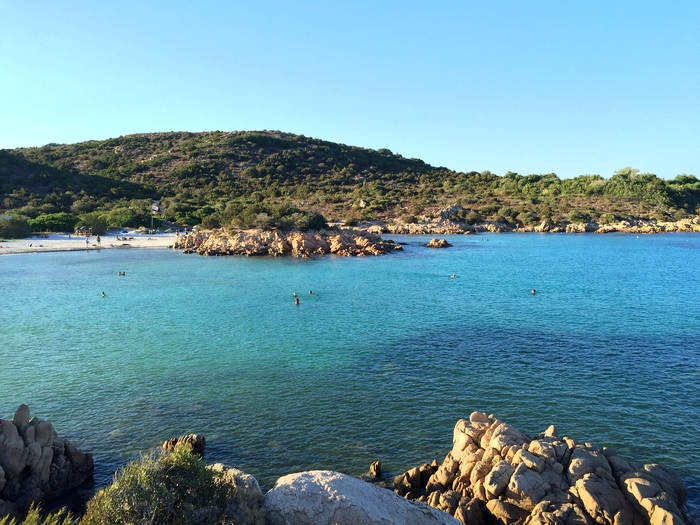 And now we come to my favorite part: for someone like me who loves immoderately the sea there is an embarrassment of choice, even if the targets that I suggest are the ones I care, a little less crowded than the average of the Emerald Coast. You can't take a dip in the sea in the beautiful Spiaggia del Principe, Double Cove, located far from the famous and Romazzino and Capriccioli photographed: It is said that the Prince's Beach was the favorite from the Aga Khan and is easily accessible via a dirt path walk, that can be covered in ten minutes (with a little patience you can bring children too). There is also the beach of Rena Bianca in Portisco, with a sea of Caribbean transparencies.

The best advice I can give you is to spend a day on the boat toMaddalena archipelago. And coming from a suffering terribly seasick ... The prices for tours are for every budget, from 25 to over 100 euro per person, Depending on the route, the service and the type of vessel. I suggest you look for ships with a limited number of people on board, at most thirty. Since the routes are different, take care that your tour includes at least Cala Coticcio (Tahiti) in Caprera, Cala Corsara sausage casings, and the natural pools of the port of our Lady, with the beautiful Cala Knight, between the islands of Razzoli, Budelli, Santa Maria. In addition to the pleasure of bathing in stunning locations you can also admire ancient rocks, shaped by the wind and the sea, and a whole series of fortifications from various periods that are reminiscent of the strategic importance of these islands.

WHERE TO SLEEP: In the countryside around Porto Cervo I found a solution that combined the tranquillity of a country setting and close proximity to major population centers. The b&b The Murichessa (one hundred euro per night in a double room in August). There are in any case in the area several structures with very good standard.

WHERE TO EAT: Restaurants in the costa serve mostly seafood cuisine, Classic or creative (average cost rather supported), but as soon as you set foot in the hinterland, the music changes and the cuisine is made from beef, vegetables, cheese, According to the Sardinian tradition. An address that I recommend, especially if you have kids (Since there is a nice Park around) is theagritourism Campesi, where you can also sleep. Here you can eat a set menu from 32 euros which includes appetizers, a trio of first (including the great suppa cuatta, a stale bread sprinkled with beef broth and pecorino), the traditional spit-roasted suckling pig, goat stew, the sausage and sweets such as the fried ravioli with ricotta and almond crisp. For a good pizza, but not only, Arzachena I recommend Il vecchio mulino, where you can eat even late into the night at a more than fair (a pizza on average costs seven euros). If you want a traditional seafood cuisine, slightly revisited in creative, but with considerably more costs incurred, I recommend that you transport in Olbia atOfficina del gusto, It also has a vegetarian menu using the vegetables harvested in the family garden.