Croissants browsed at the French 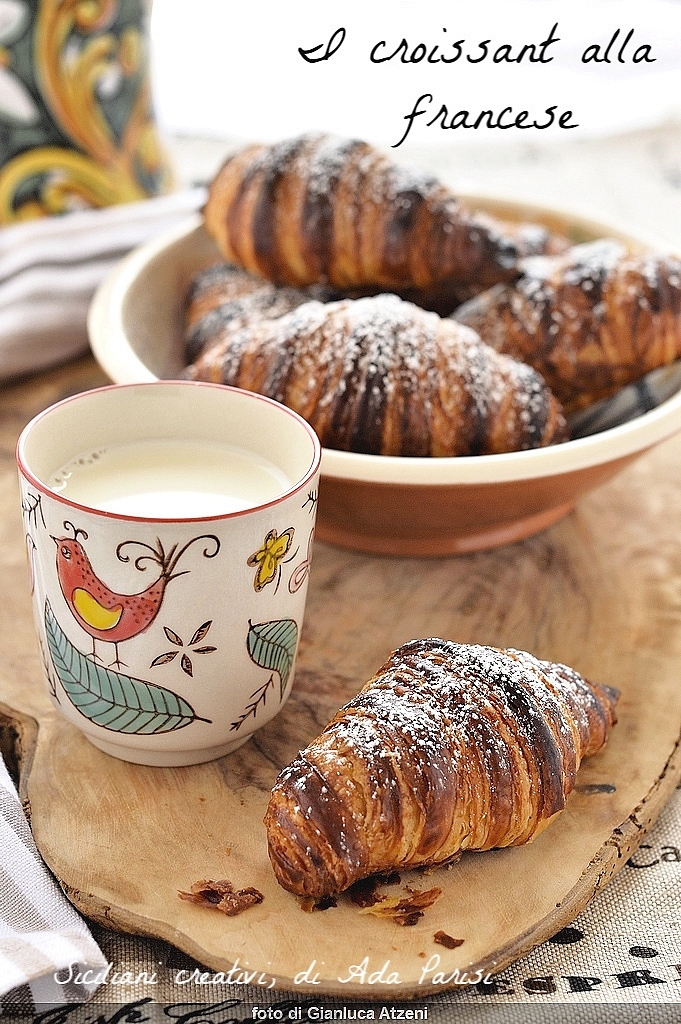 Croissants browsed at the French. What better awakening, in the morning, that a warm Croissant for breakfast? Prepare fresh croissants for French, with their intense scent of butter, It is not difficult. It only takes time and patience. Is, Once you get, you can freeze to have them fragrant every morning with your coffee or cappuccino. This is the recipe for Michel Roux, Chef with three Michelin stars. But if you love kneading, I suggest you also try the RECIPE OF THE CROISSANTS BROWSED by master pastry chef Piorgiorgio Giorilli.

To prepare the croissants browsed to the French you need a planetarium, or a food processor, although you can prepare the ’dough by hand, since the first loaf does not contain butter and, then, it's easily workable. In this recipe, we use fresh or dry brewer's yeast in small amounts but enough to get a fairly quick rise. If you prefer, instead, a croissant with very little yeast and a long ripening and leavening, the recipe for you is that of Giorilli that I was talking about earlier.

Croissants can be frozen already cooked and then thaw in the oven at 150 degrees temperature, or freeze raw and already yeasted, and then be baked directly. in any case,. I advise you not to freeze them and consume them just made. Have a good day. 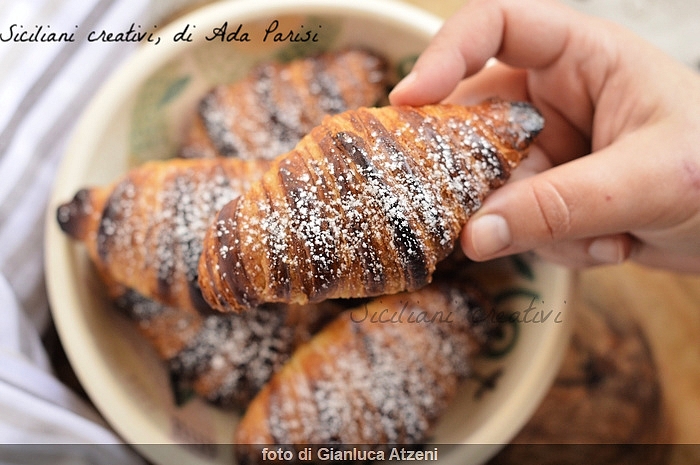 Croissant at the French 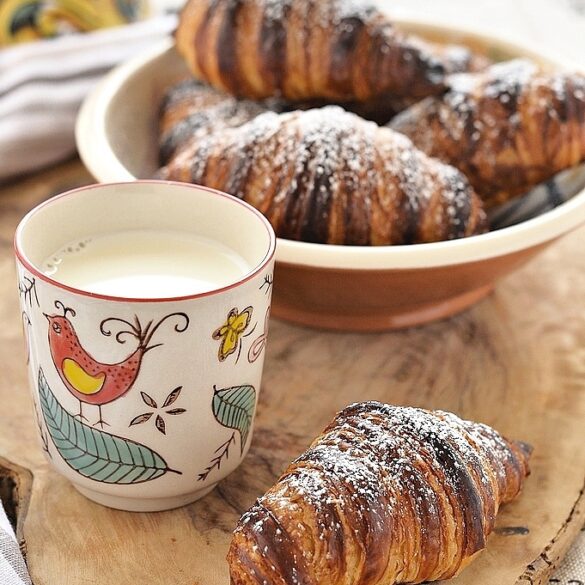 an egg yolk
a tablespoon of milk
powdered sugar as required 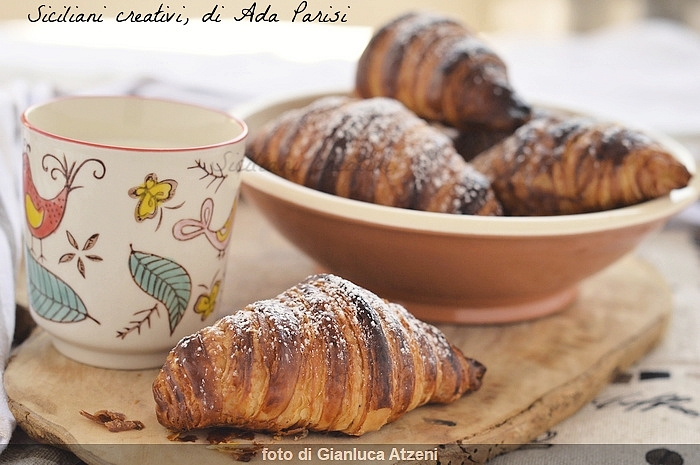 Croissant at the French

Put the flour in the planetary, sugar, the fresh brewer's yeast dissolved in milk at a temperature of about 22 degrees (or that of dry beer put directly in the dough) and start working the dough. Halfway through the processing add the salt and continue until the dough is smooth, homogeneous and well-strung.

Cover the bowl with the dough with food film. Leave to rise in a warm place at a temperature of about 27 degrees (oven with light on), until the volume doubles. Deflate the dough by gently turning it with your hand. Cover again with clingfilm and refrigerate for four to eight hours. After the interval of rest, transfer the dough to the work top, slightly floured.

After the interval of rest, roll out the dough again in the shape of a regular rectangle. Fold a third of the dough towards the center, then fold the other flap until you touch the smaller one. Finally, close the dough to book, that is, fold it in half. Put the dough back in the refrigerator for 30 minutes.

Let's get to the last lap. Roll out the dough again with the rolling pin on the floured work surface and perform a new fold: fold a third towards the center and then the remaining part to close. Put the dough back in the refrigerator for at least an hour.

Once you have the dough ready, To make croissants you have to roll out the dough half a centimeter thick in a rectangle of 65 centimeters by 40 centimeters. Then, trim the edges and cut them into two equal strips from which you will have to get many triangles of 10 centimeters by 18 centimeters: I take measurements with tape, for greater accuracy.

Make an incision at the base of each triangle of a centimeter and, to form the cornet, pull the two corners of the base of the triangle and roll the croissant from base to Summit. Brush the croissants with the beaten egg yolk with a tablespoon of milk and sourdough in a warm, about 24-30 degrees, for two hours: should double in volume.

Preheat the oven to 170 degrees, brush the croissants again with the egg and milk and bake for 14 minutes. Make it cool, Sprinkle with icing sugar and serve.

Cakes and tarts to make in...

Hi Ada! I can ask you that flour is better to use for this Recipe? And then, at first when you write to work the dough, you have to work the flour with the milk? It doesn't say any liquid! Thanks!!

Hi Jessica, thank you for the request, in fact in the recipe was not specified well and i corrected: flour 0 or 00. Yeast should be dissolved in milk if you use fresh beer, if dry you don't have to. Milk should be added to the flour immediately. A warm greeting, ADA

but thank you always for your attention Alexander… good week!

Hi Ada.
Thanks for your answer.
they were crispy puff pastry :)
Thanks :)

So I think that is enough even the pastry that you buy over the counter fridge, they cannot rise as is necessary for the croissants, and stuff it with custard (I baked custard recipe on the site, I seem to have made some tarts who had inside) taking care to seal the edges, then sprinkle with egg yolk diluted in a little milk sprinkling it all with lots of sugar. In the oven at 180 degrees.

Hi Ada.
I remember when I was a kid and I was living in Palermo I enjoyed eating the “triangles with yellow cream” every Sunday at our local bar, especially when they were lukewarm :)
I don't know if these triangles areno something that only sevivano to Palermo if you eat all over Sicily but I never found a recipe for making them at home
basically i like croissants for your recipe and then put custard in the deck and the same thing?
Thanks :)

Hello Alexander! Let me understand better, they were small triangles of crisp flaky pastry or dough? So I can help you… ADA

Hi Ada, they are beautiful and inviting!
Brava! Kisses

Hi Ada :) They came to you perfect, congratulations!!! :) I also have Roux's book but I haven't tried it yet… Meanwhile delizio me with your, who knows what goodness and smells great…. Vist, a hug and good weekend! :**

Hello Vale! I'm sorry I took so long in responding but I was making dessert for your contest…a grind!!!!