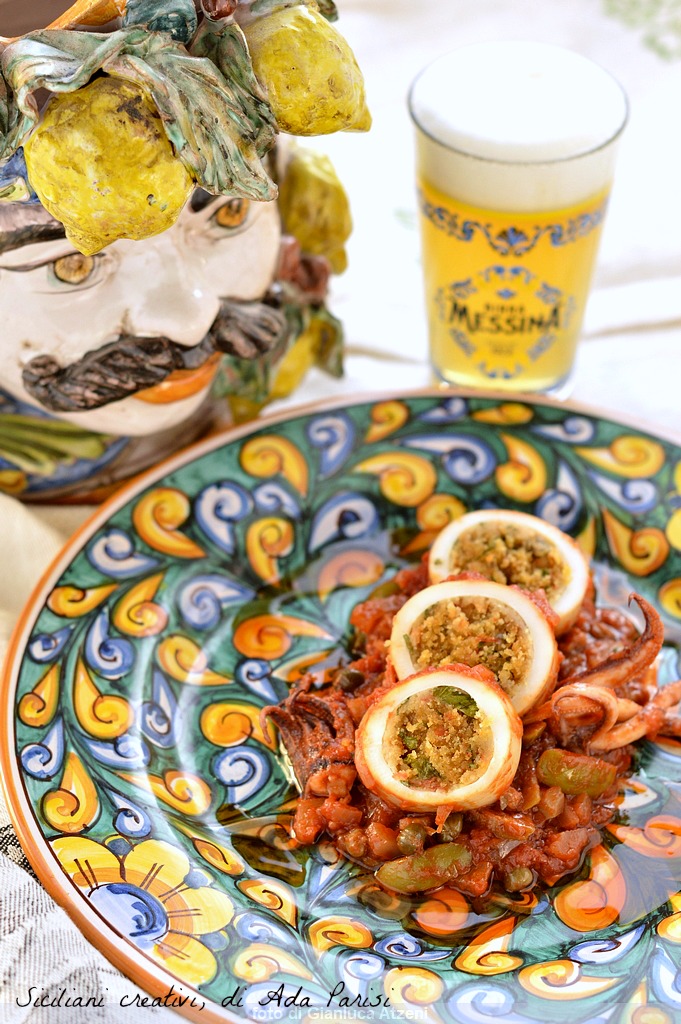 The protagonists of today's recipe is stuffed squid, Cooked-to-tempting Sicilian, or better to Messina. You should know that on August 15 is an important day for Messina: It is the day of Vara. And my family is the day of stuffed squid in greedy. Actually, tradition Messina would like to celebrate the Vara prepare chanterelles with tomato. My mother, however,, that is Palermo's origin, detests them warmly. And I also. So, since I can remember, My mother prepares the squid. I chose to tell you today a recipe for stuffed squid to greedy and tradition of Vara (out of season), because for me are two things linked inseparably. I found the squid from my fishmonger. And I can not take advantage of loses possession (easy joke, I admit) to tell you this recipe and the feast of Vara.

One of the symbol of my city flat, In fact, is the sauce tempting to Messina: a sauce prepared with extra virgin olive oil, onions, celery, Capers, olives in brine and tomato, simple but delicious. This sauce is cooked the fish. First, the swordfish the Strait. What if you spent the Messina, I would suggest you look at the sea at night, with lamp lights that indicate small boats scattered on the water. A landscape of the soul for every Sicilian that crosses the Straits of Messina.

At elapsed are prepared also the fish stockfish and stockfish, Messina left a legacy that Norwegians, their vessels, rescued citizenship in the aftermath of the earthquake and tsunami of 1908. Swordfish and sword fish are well known to greedy, their fame has even surpassed city limits. Few however know the recipe that I present today, stuffed squid a ghiotta. A dish that combines the most typical sauce of the city of the Strait to squid, another symbol of the Sicilian seas fish. 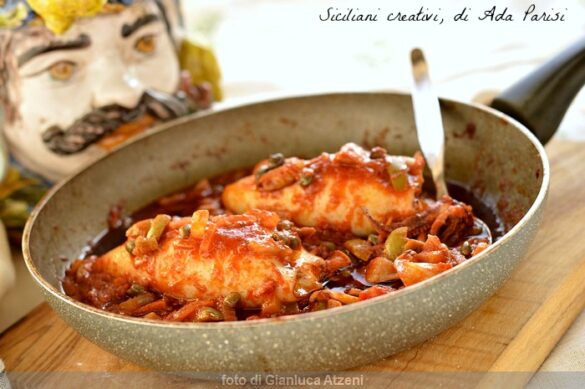 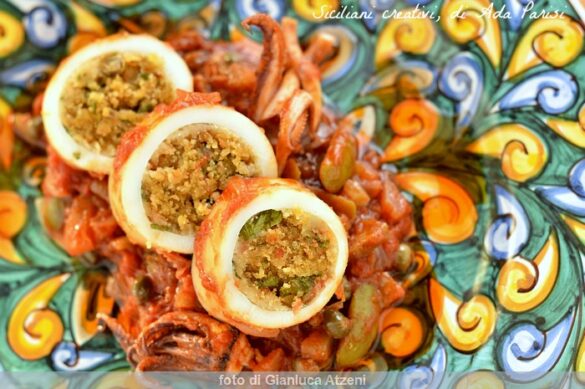 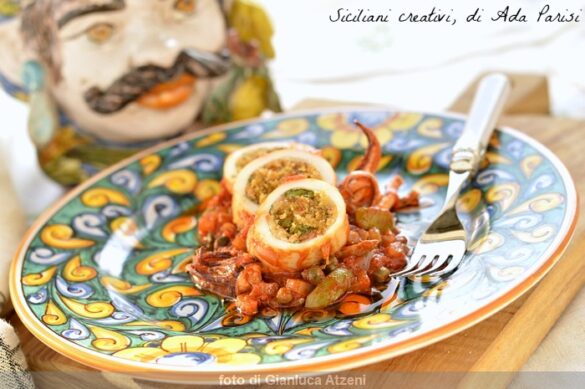 Squid and squid both belong to the family of cephalopods, and are very similar. Despite the squid are considered a prized fish and are definitely softer, a true Sicilian has in his heart the squid. A more rustic fish, to be treated with care. The harder if he did not leave the right cooking time, but certainly very, much tastier. Stuffed, with the usual Sicilian stuffing made with bread crumbs, Style canestrato, parsley, Capers, tomato and extra virgin olive oil, the squid do their magic and become a delicious dish and fragrant. Cooked in the sauce to the greedy are unforgettable, as well as stewed or stuffed. Find many ideas to try in my RECIPES WITH squid and calamari.

Unfortunately, This is a dish that you eat now only family, often during the lunch ceremony Sunday: restaurants do not offer nearly as, because favor the use of squid that of squid. The optimum cooking it in a crock pot: once it is rested on the grill, just like people used to PASTA 'ncasciata TO MESSINESE and many other SICILIAN RECIPES. I paired the squid stuffed with tempting to Messina with another symbol of my city: beer Messina Salt Crystals. The history of Messina is linked to that of this beer that has grown along with the city, up to be known throughout Sicily and even beyond. When I was asked by Brand Beer Messina to devise a recipe to represent my country and its traditions, I had no doubts. The combination stuffed squid and cold beer is perfect. You will understand from you trying this recipe and tasting it with a beer Messina. There seem to be in Sicily.

In a city that has been broken by the earthquake of 1908 and still has not fully recovered from disastrous event that caused thousands of deaths, Vara is a lifeline. A rite of memory shared by all citizens. At this festival it takes part in the entire population, but also so many people who come specially from other parts of Sicily. And many migrants who choose to return to their home in August to be present at the ceremony of Vara.

No social class distinctions, income or culture: on August 15, everybody meets, next to each other. Often they meet friends and acquaintances with whom you had not seen in a long time: and Sicily is always time for a coffee, a beer or a granita with an old friend. It is time to chat, to share wine and food, wishes to be. And he looks forward “turn”, The complex movement that brings Vara to take at right angles from Via Garibaldi to Via Primo Settembre and then Piazza Duomo. Depending on how many movements will be required to make “turn”, each one in his heart will make assumptions and predictions about future. 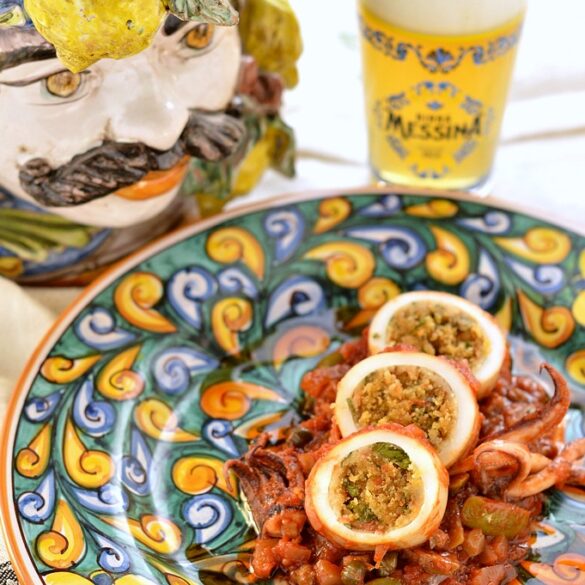 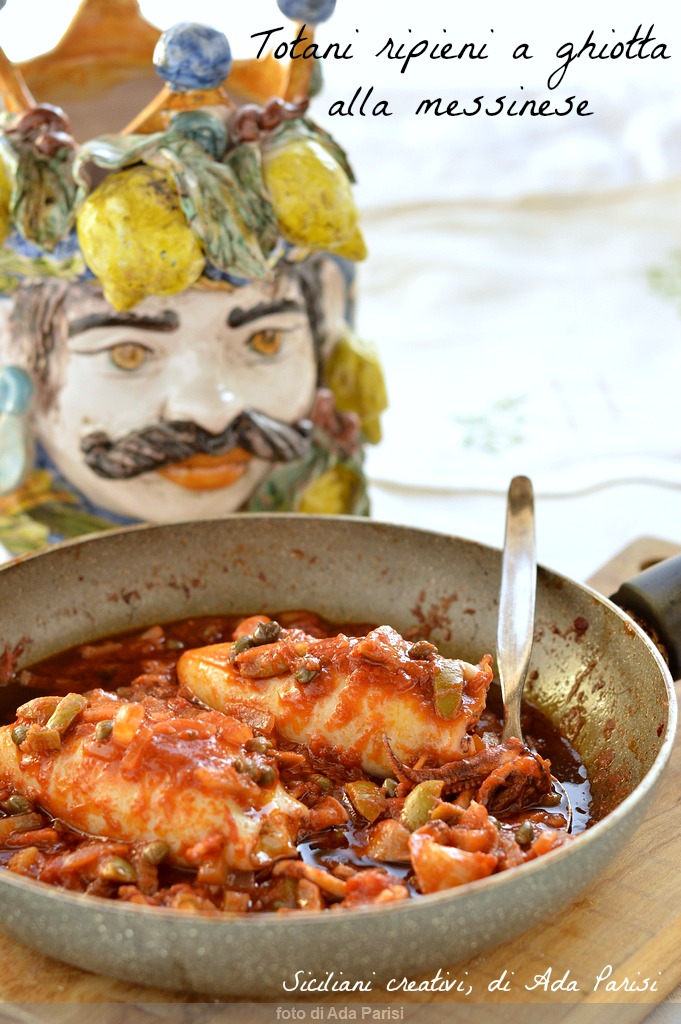 To prepare the squid stuffed with tempting to Messina, you must first clean the squid as you see in the tutorial of my VIDEO RECIPE a similar dish, squid stuffed tomato. Once cleaned, dried squid carefully and set aside with their tails.

For the dough, I use both the breadcrumbs or bread crumbs. This is because the bread crumbs is very dry bread crumbs, puree in a blender, It will give more softness to the compound. Blend the breadcrumb or bread in the mixer together with garlic and plenty of parsley. Peel the tomatoes and cut them into small pieces by storing the seeds and vegetation water to give moisture to the mixture.

Place in a bowl the breadcrumbs, the breadcrumbs pureed with garlic and parsley, pecorino, finely chopped capers. Add freshly ground black pepper and the chopped tomatoes with their water vegetation and seeds. At this point, just add as much oil as the mixture is soft but grainy. Taste to verify that the dough is correct with salt.

Fill with this mixture totani: you can use a spoon as you see in VIDEO RECIPE squid stuffed tomato. Be careful they are filled evenly (the way down) but also not to fill them too, otherwise it may crack during cooking. Leave a space of about 1 centimeter before the edge of the totans to be able to close the end with a toothpick.

To prepare the sauce ahead, clean the celery, removing the stringy parts. Clean onion. Slice both coarsely. Put celery, onion and olive oil in a pan. Add a little water and simmer the vegetables over low heat until they are translucent. If necessary, so it does not dry out too much sauce, cover with a lid. Once the vegetables are translucent, add the capers, olives chopped (without the core) and the peeled tomatoes. Sample, season with salt and cook over medium heat for about 10 minutes.

In another pan, brown in olive oil stuffed squid and their tails. Rigirateli gently and make sure that they take a uniform browning on each side. Add the stuffed squid and the tails in sauce greedy and cook over low heat for 20-30 minutes (depending on the size of the squid), always covered and turning them a few times. Once the squid are cooked, let it cool. If the squid are small integers can serve them with their tails, and the sauce, they are great, slice and serve on individual plates with the sauce tails and the greedy. If you leftover sauce greedy, the tails chopped and used the sauce for spaghetti. Bon appétit!