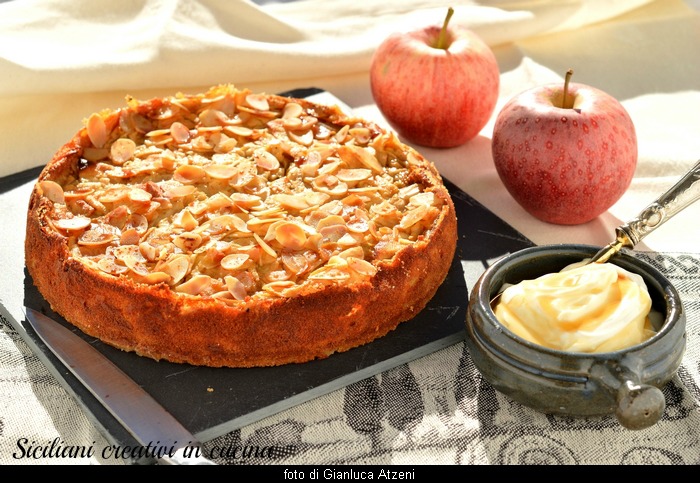 Apple pie light: slight, indeed very light. Imagine the scene: early autumn, in the House starts making colder but still not heating, before lana shoulders, It's Saturday afternoon and you fancy a hot cup of tea, of those that warm inside, accompanied by a slice of the cake tastes better than ever, the Apple Pie. An idyllic setting, unless the small detail that you are on a diet. Here's, This was my Saturday afternoon last week. And if the desire of Apple Pie was irresistible, don't pass ever, and don't eat it you put in a bad mood for the next 2000 years you you would do?

If you don't have the solution I: would you do the ' invisible ' apple pie, that is more than light, almost without ingredients except apples. I discovered thanks to Monique the blog Miel and ricotta. Is’ a dessert that tastes like the classic Apple Pie but not the calories. The size of the light apple pie is very different, Why not having pretty much dough is more like a pudding than a cake fluffy and risen, but it is very good. And if I do say so myself, accustomed to the spectacular APPLE CAKE MOTHER (that are in VIDEO RECIPE on my YouTube channel), can you believe it. The light apple pie is good and healthy as the Crumbled INTEGRAL TO APPLES AND FLAKES, trust me.

The doses of sugar and flour are very low and the dough is actually a sort of batter that holds together the apples, that have to be cut into chips with a mandolin. I recommend you to choose very sweet apples, view the parca amount of sugar. Only drawback – but maybe not so awful – It is that the pie lightly apples should be eaten quickly. Because the large amount of fruit gets wet quickly. One more excuse to eat it by running. The recipe is the same as that of Monique, except for the addition of lemon zest and cinnamon in the dough and a shower of almond flakes on the surface. The crispy for me is never enough. Take finally a look at all my RECIPES WITH APPLES, sweet and savory, including the fabulous APPLE TART AND CUSTARD. Have a good day! 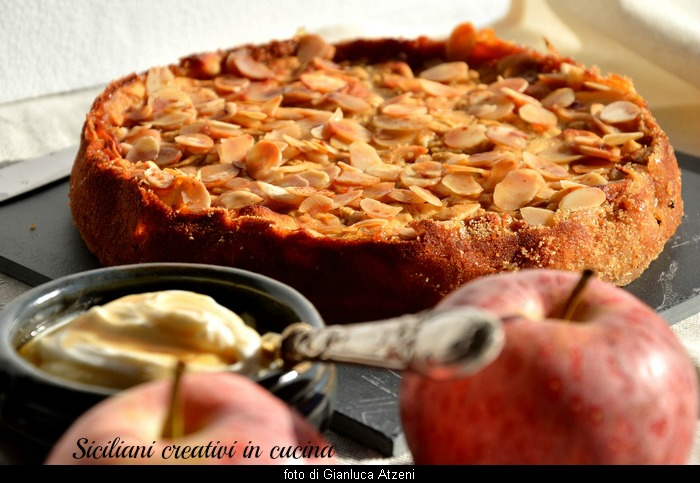 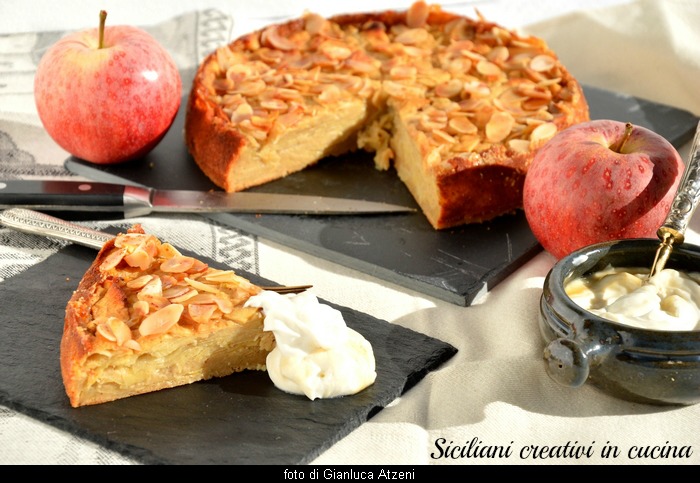 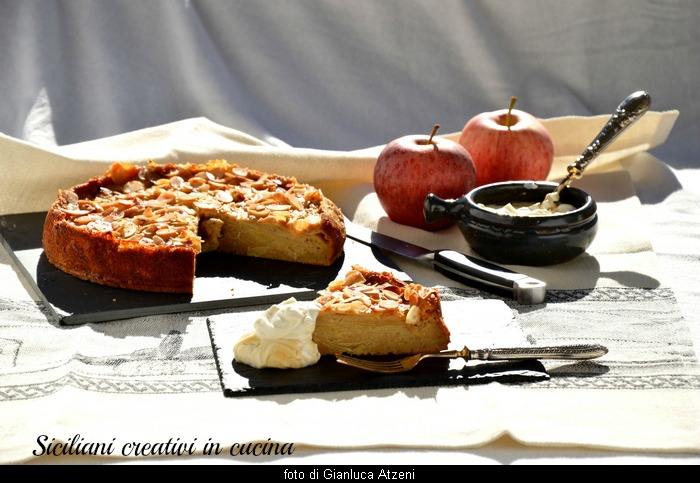 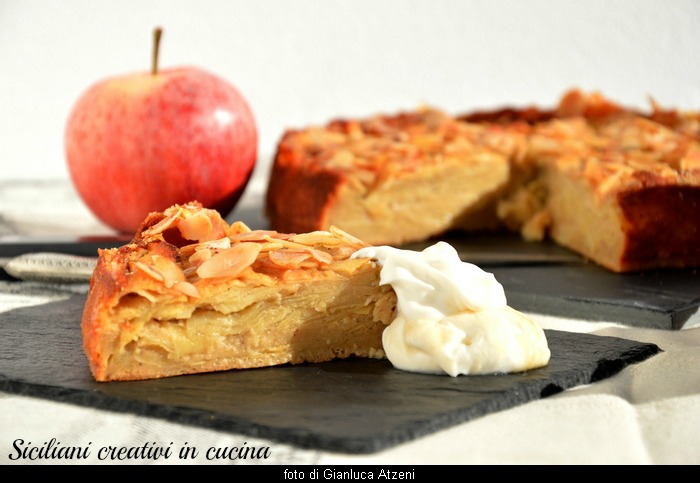 a teaspoon of organic extract of vanilla

50 grams of brown sugar until

butter and bread crumbs to the cake Pan, to taste 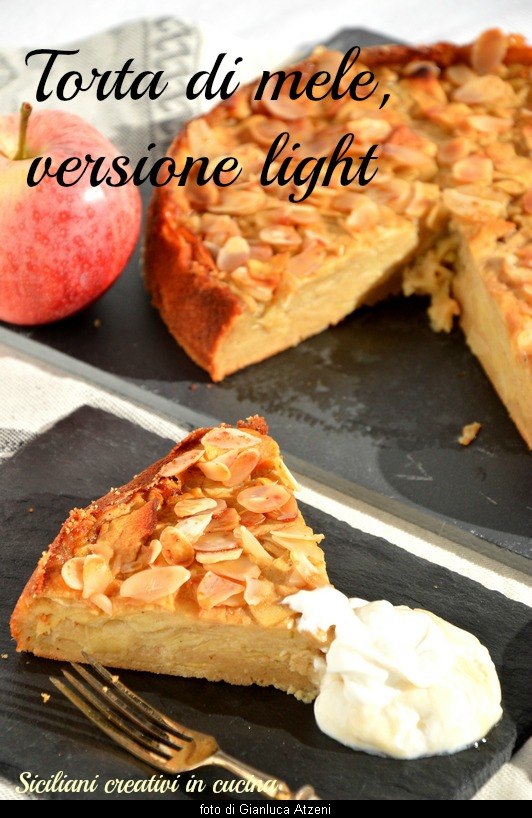 To prepare the cake lightly apples, really very easy to do, you first need to preheat the oven to 200 degrees static. Place in a bowl the eggs and sugar, then whip with an electric mixer until the mixture is fluffy and puffy. Add vanilla extract, the cinnamon and the grated lemon rind. Dissolve yeast in milk, combine the melted butter and pour the mixture into the mixture, by blending until the liquid has been absorbed, then add the sifted flour, stirring so they do not create lumps. Finally, Add salt (a large pinch).

Wash apples, Peel, cut in half and then into quarters, then with a mandolin slice them fine, adding them gradually to the batter of eggs and flour.

Grease the baking Tin and sprinkle with breadcrumbs, then pour in the mixture and level surface. Sprinkle the apple pie lightly with the slats of almonds and a pinch of cinnamon. Bake for 40-45 minutes (worth the toothpick test). Allow to cool slightly apple pie and serve the cake with whipped cream or vanilla ice cream, If you don't have calories, or with Greek yogurt sweetened with 1 teaspoon honey or agave syrup if instead, like me, you have to be careful what you eat. Bon appétit!

Cream cooked with apples and blueberries

Cabbage with almonds!!! Naidu, I had to think about it now!! Bravo and thank you very much for your words!

Hi Monique, Thanks to you… I'm on a diet and really with this cake you saved me… to me come to mind just hyper caloric sweets…