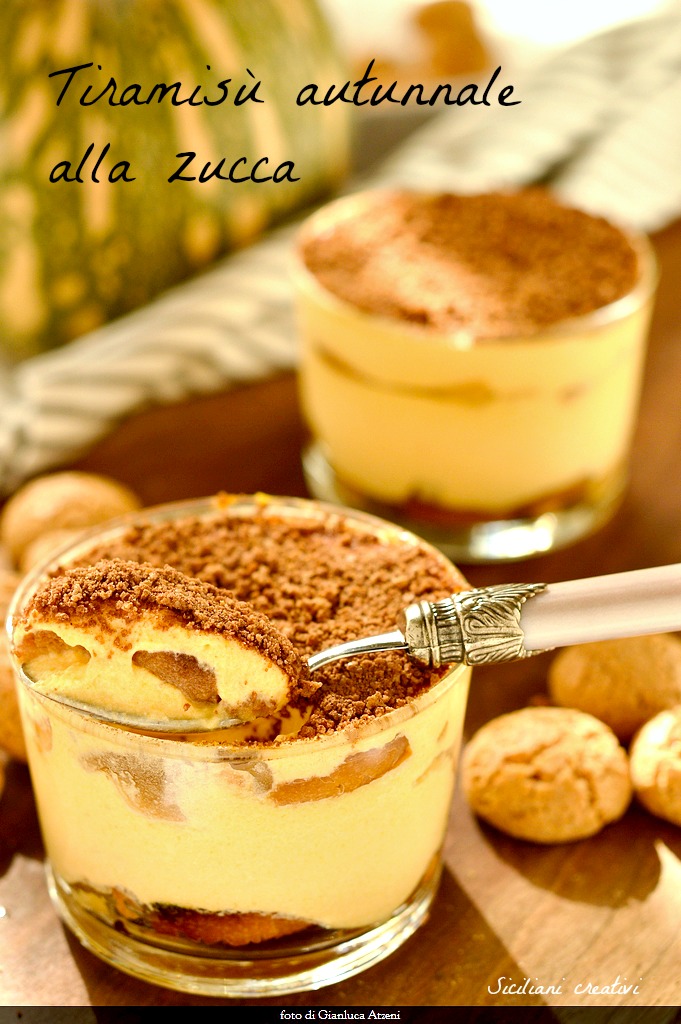 Pumpkin Tiramisu. I love the pumpkin and some time I whirred in the head the idea to use it to prepare a tiramisu. I don't see why, as with the pumpkin are soft sweets (already tried my pumpkin and Almond Cake?) and creamy pies (like the classic pumpkin pie Americana), with this extraordinary vegetable you can't create a perfect cream for the tiramisu. Among other things, the pumpkin is already naturally sweet, and this then allows you to use less sugar in the preparation. And so here's my pumpkin tiramisu.

I immediately thought of using the puree and cook the pumpkin in the oven to remove as much water as possible (in the recipe I give you some advice on how to get rid of excess water after cooking) and sharpen the taste naturally sweet and almost caramelized. The combination with amaretti and cocoa was instant. For the syrup, not being able to use coffee, I used a light syrup of sugar and water with a generous dose of Amaretto di Saronno. For the rest, Sponge fingers, eggs, Mascarpone. Other variant: to give more support to the cream I used egg whites but whipped cream. The result was very good: a light and creamy texture, a caramelized flavor but not cloying. If you prefer pasteurize the yolks, simply make a syrup with sugar and 20 millilitres of water: Let it boil for one minute (is expected to reach 121 degrees, If you have a thermometer, it's time to use it) then pour the yolks and mount them normally until cool. If you like pumpkin, you can't help but take a look at all my RECIPES WITH PUMPKIN, you'll surely find a delicious dish to prepare. Have a good day! 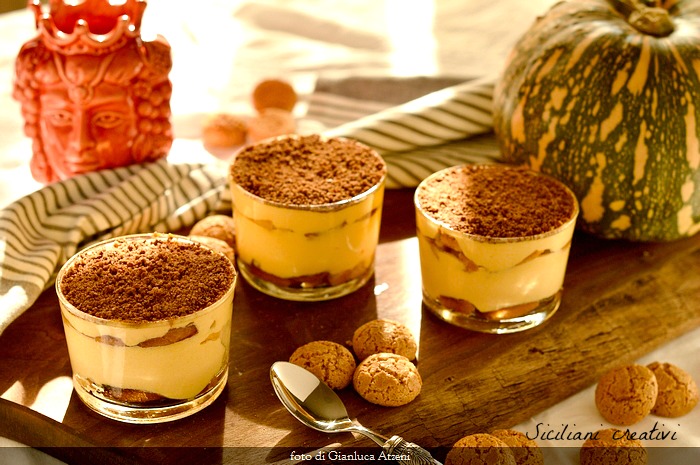 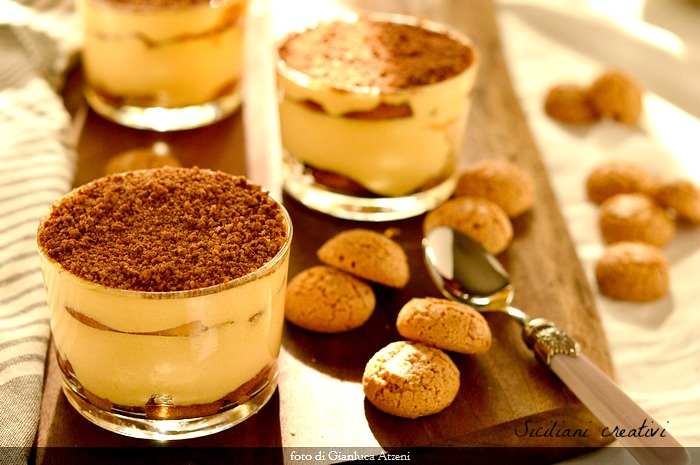 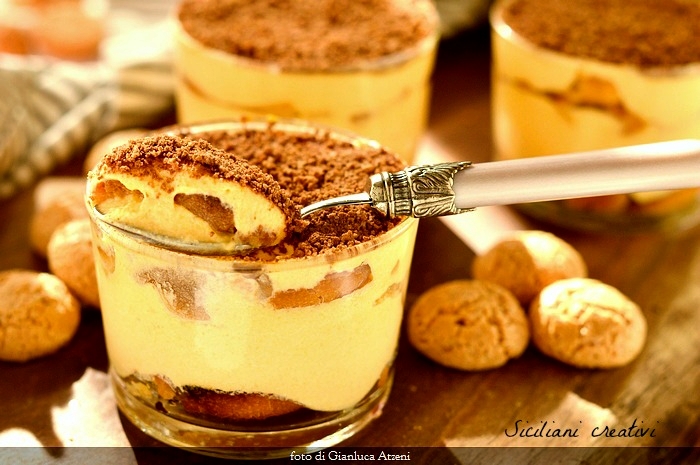 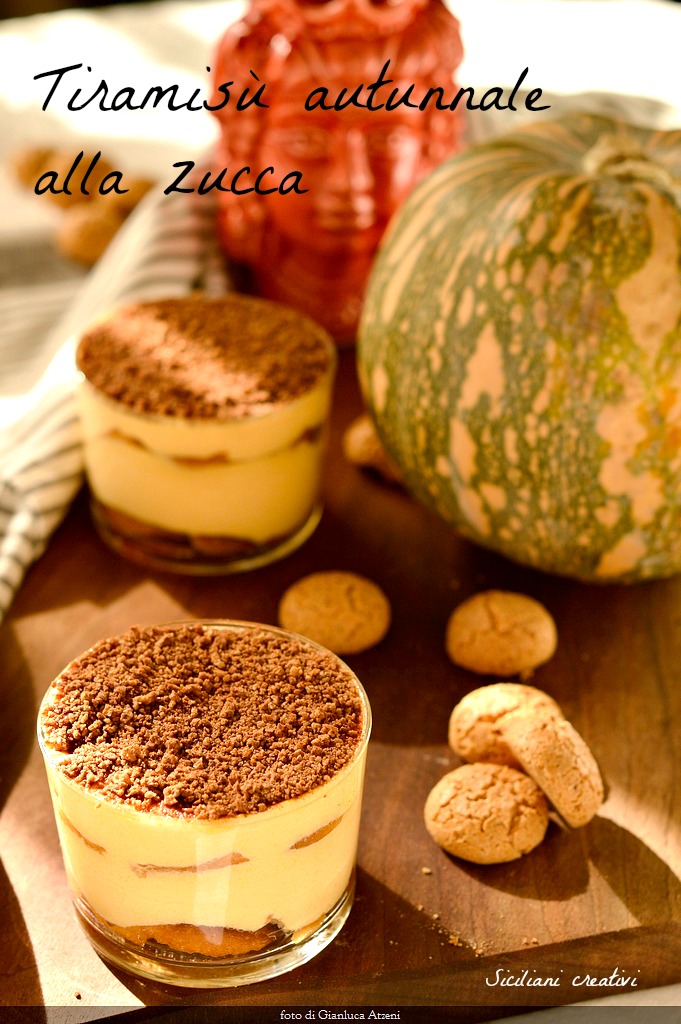 To prepare the tiramisu autumn pumpkin, Cut the pumpkin into pieces, by removing the peel and the filaments (but you can use them by baking them in a ventilated oven with a little spice until they are crispy, because the pumpkin is entirely edible), put it in a baking pan and bake at 180 degrees in a preheated oven until tender.

Allow to cool and beat with a hand mixer, then put the resulting puree in a colander very dense and let lose more water can (suspend the strainer inside a bowl and do not touch the puree for at least 30 minutes, you'll see that it will release excess water).

Meanwhile, beat the egg yolks with sugar until the mixture is puffy and fluffy, then add slowly the mascarpone, always by mounting. At this point, Add the pumpkin puree, one tablespoon at a time, continuing to whisk the mixture with whips.

Whisk the cream too firm and not to blend it with the egg mixture, Mascarpone and pumpkin using a spatula, and making a top-down movement to incorporate air and not disassemble the compound. Cover with food film and refrigerate for at least one hour, so that the cream rassodi.

For the syrup, put the water and sugar in a pan, bring to a boil and then reduce by half, then turn off the heat and add the Amaretto di Saronno. Allow to cool completely.

Crumble the macaroon and mix them with a little cinnamon and bitter cocoa powder, According to your tastes.

Composition of pumpkin tiramisu: Soak the ladyfingers with the mixture of water and liquor and place them on the bottom of the glasses or the Pan, cover with mascarpone cream and pumpkin, make another layer of ladyfingers soaked and another layer of cream. Sprinkle the surface of the pumpkin tiramisu evenly with crumbs of amaretti, cinnamon and cocoa and leave to rest the cake in the refrigerator for at least 6 hours. Bon appétit!

MATCHING: The classic Italian pastry deserves a pairing with a big distillate always made in Italy: grappa. We suggest Red Peat, produced by Robert Carpenter, Distiller veneto. This distillate is made from the skins of red grapes in the area of the river Piave, that are smoked and toasted with the use of the microwave. The grappa is made to rest for one year in barriques of precious woods (Cherry and oak).

I love pumpkin and I never would have thought to find it in tiramisu. Congratulations

Thanks <3 a dear greeting and good weekend. If you want to try it I would very much like to have your opinion. Kisses, ADA

ADA we don't relish the macaroons and amaretto di will be you can replace them? If Yes with what thanks

Hello Lucy! You can use some’ Cointreau or Marsala to the syrup and above even unsweetened cocoa, If you want some’ of crisp you could add chopped almonds or hazelnuts!
ADA