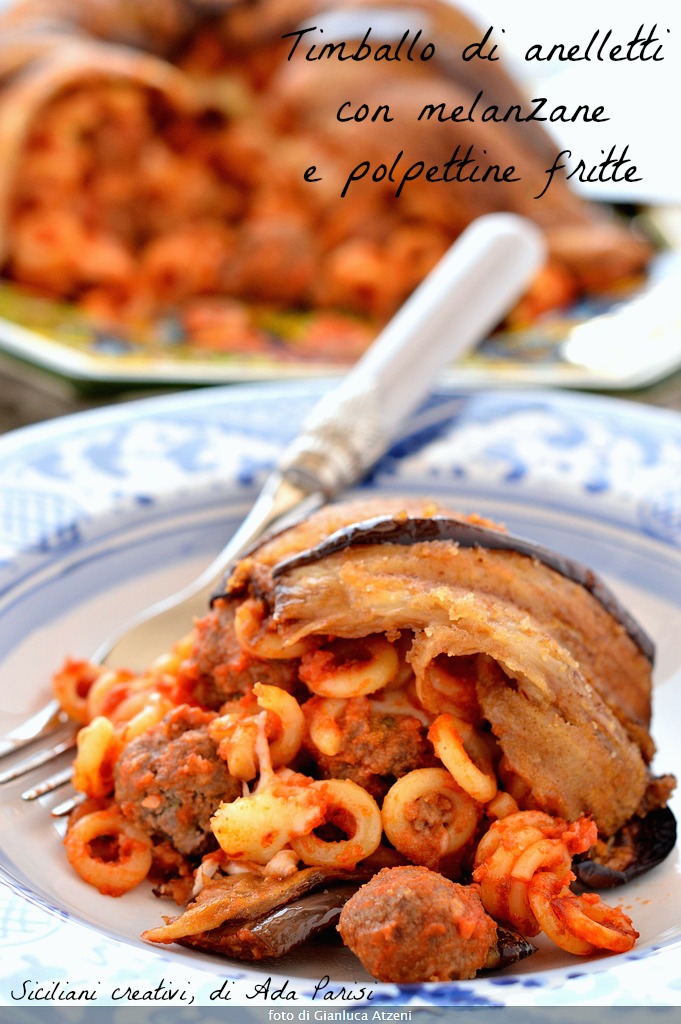 This is the variation of the Sicilian timballo with meatballs that we prepare in the family on the occasion of August, as an alternative to pasta 'ncasciata Messinese, They all had the opportunity to appreciate in books or in the TV series Inspector Montalbano, Andrea Camilleri. Obviously for me it is essential that the dough are Sicilian anelletti, but you can also use a short pasta such as rigatoni, the casarecce, half sleeves. For the meatballs, strictly fried, I use a mixture of ground beef and pork, and then bake in tomato sauce.

All’inside of the Sicilian timballo with meatballs, Add a semi-hard cheeses, in my case provola dei Nebrodi. Sometimes I add also boiled eggs, as in traditional timbales. I have enticed enough? Hope you. Take a look at all my other SICILIAN RECIPES and my RECIPES WITH EGGPLANT and run to prepare this pie. Have a good day! 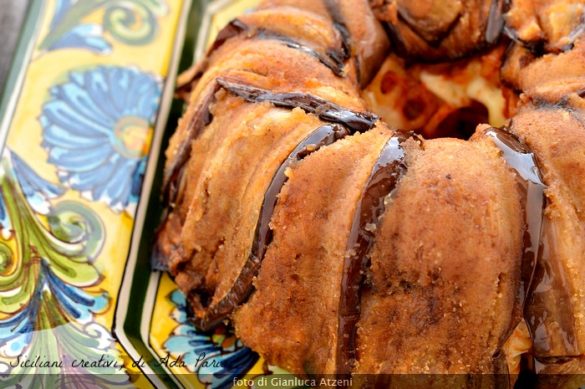 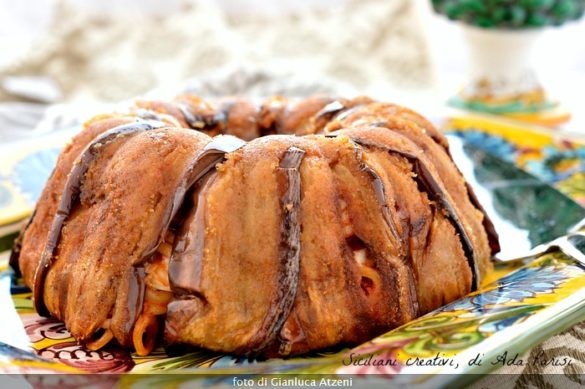 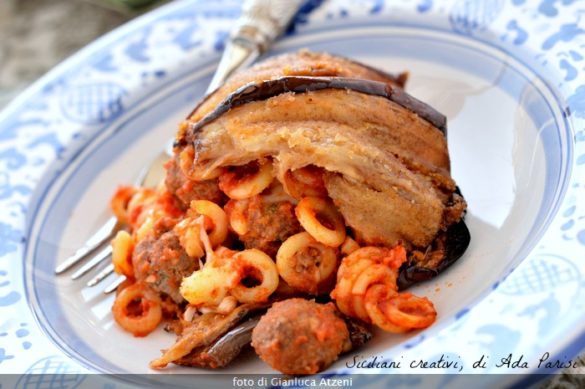 300 grams of little rings (or other short pasta), I used the paste De Cecco
1 liter of tomato sauce
fresh basil, to taste
extra virgin olive oil, to taste
salt and pepper, to taste
500 grams of ground mixture of beef and pork
breadcrumbs, to taste
parsley, to taste
1 whole egg
120 grams of Parmigiano Reggiano PDO cheese
80 grams of cheese DOP Pecorino
peanut oil for frying, to taste
200 grams of cheese or provolone (or at least a soft cheese or seasoned seeds)
4 boiled eggs (optional) 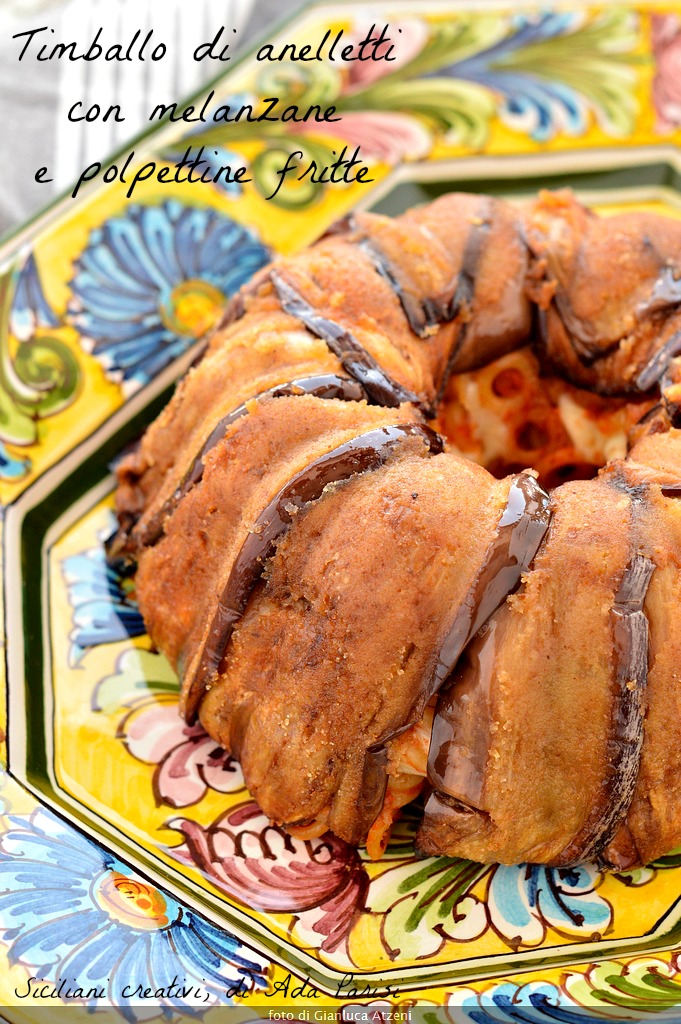 Timbale with eggplant and fried meatballs

Before preparing the anelletti timbale with eggplant and fried meatballs you have to do the meatballs and fry the eggplant. For the meatballs, place in a bowl the ground beef and pork, chopped parsley, a pinch of salt, an internal egg, 30 grams of bread crumbs, 40 grams of DOP grated cheese and 50 grams of Parmigiano Reggiano Dop. Mix everything together and, with fingertips lightly moistened, form so many balls small and regular size. Breading each patty in breadcrumbs and fry the meatballs in oil peanut oil. Put the meatballs from.

Put extra virgin olive oil and tomato puree in a large saucepan. Add a few leaves of basil, Salt, the tip of a teaspoon of sugar and cook covered for 15 minutes. Add the meatballs to the sauce and cook for another 10 minutes. Allow to cool.

Wash the eggplants, eliminate the ends and slice thickness at regular slices (about one centimeter). Sprinkle the aubergines with a little fine salt and fry in extra virgin olive oil until the aubergines are golden on both sides. Put the fried eggplant on paper towels and let cool.

Cut the cheese into cubes. Anelletti Boil in salted water and drain when al dente: I suggest to cook for a time equivalent to half of that indicated on the package, because then suffer the passage in the oven.

Grease a mold with extra virgin olive oil (use a brush to a greater uniformity) and sprinkle the mold with breadcrumbs. Coat the mold with the fried eggplant, so that it is completely covered (overlap the edges slightly). Pour into the mold half of the pasta with the sauce meatballs, distributed over the cheese cut into cubes and boiled eggs (if you decided to put them) and cover with the rest of the dough.

Preheat the oven to 180 degrees static. When the oven is hot, cook a timbale of eggplant and meatballs for 20 minutes. Remove from the oven and allow the pie to cool for 5 minutes before throw. Turn out the timbale Sicilian eggplant and fried patties on a serving dish and serve immediately. Bon appétit!

MATCHING: Vermentino di Gallura DOCG top (fear) produced by Siddùra, a Luogosanto. A white man with an experimental soul, that is fermented and aged in French oak barrels young (Allier), A structured wine, with notes of vanilla, butter and honey, which combine the freshness and great flavor, typical of Gallura Vermentino.

Spaghetti with tuna and onions, olive...

A super delight
Thanks
A big kiss