Made in Italy. Seal Jelmar La Fauci, between sea and hills in the heart of Faro Messina Doc 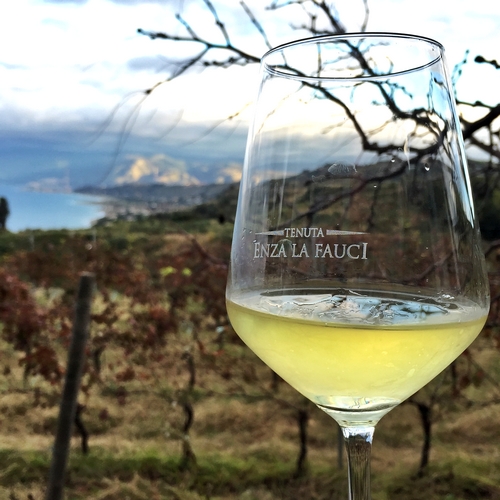 Broaden their gaze from Scilla in Stromboli, caressed by the wind insistent of Sicily, iridescent skies at sunset offers all its beauty. Overlook the terraced vineyards Seal Jelmar La Fauci is first and foremost a scenic experience. In these hills, at 300 meters high, in the small village of Messina-Salinas, where the long chain of Peloritani mountains plunging into the Tyrrhenian Sea, giving rise to Capo Peloro, It produces one of the most famous wines, rare and sought after of all Sicily, Il Faro di Messina. To tell the tale I picked a company ' in the pink ', led by a woman of great temperament and the big bright eyes: Ithout The Jaws. 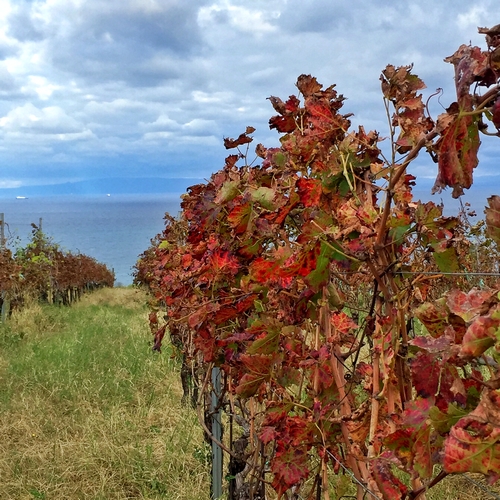 Enza greets me and showing me her estate: two and a half acres of vineyards surrounding a former hunting seat, originally a small tenant house built in a strategic position by the father, Avid Hunter, He purchased the land in the 1960s to catch quails that frequently pass in these areas, long-established migration lines. Starting from the cabin, Enza has built the winery. Degree in economics, He began working at a young age in the family business, the enterprise the Jaws, Note in Messina for building bricks and bricks from the late nineteenth century. In The 1980s, along with his brother Giovanni, Enza founded the distillery Giovi (the name derives from John and Vincenza). The distillery was founded as a hobby, for game, but that game becomes a job. The Giovi, at that time, It was one of the few distilleries in Sicily can work the skins, waste material from the processing of the grapes. 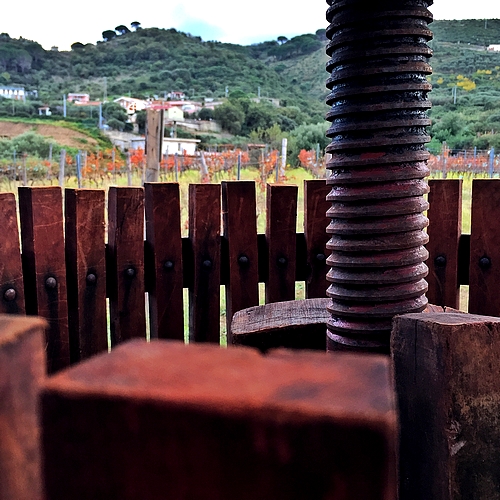 The distillery Giovi referred the large producers of the island, by Marco de Bartoli to conte Tasca d'almerita, by Carlo Hauner (the well-known manufacturer of Malvasia in Salina island) to Ignazio Miceli. Enza attends them, knows them, become friends. From knowledge of the tenants, the interest moves to the world of wine, with a particular passion for grapes and vineyard: “I fell in love with grape and vine”, He told me. The wine, In fact, was already a family thing: in the hunting lodge of the District of Mezzana, where is now the winery, Enza's dad produced wine for family consumption. The vines were, yesterday and today, Nerello Mascalese, Nerello Cappuccio, Nocera and Nero d'Avola. Enza li studies, teaching himself we learn the limits and strengths. These are the grapes that make up the denomination of controlled origin “Faro di Messina”, from which this Winery derives much of its production every year (17 thousand bottles between wines and spirits).

The estate is now conducted with natural methods (organic), in the vineyard we try to respect the land, with predominantly manual interventions, no use of herbicides or pesticides: in an area known as this “you do not need to do anything that is not in the natural cycle of the plant”. The winds of the Scirocco and Tramontana, In fact, greatly reduce the risks of diseases of grapes and strains are rooted on land mainly of clay and limestone, with traces of Golden mica. Derived products with a strong minerality and crispness, and a tendency to longevity. On this basis the work of the staff of the estate Ithout The Jaws: composed of Emiliano Falsini, John Sales and Kavita Saini for the agronomic and oenological, for the agricultural part, by Vincenzo Abo with his group of young farmers coming from Maletto, small town of Etna. 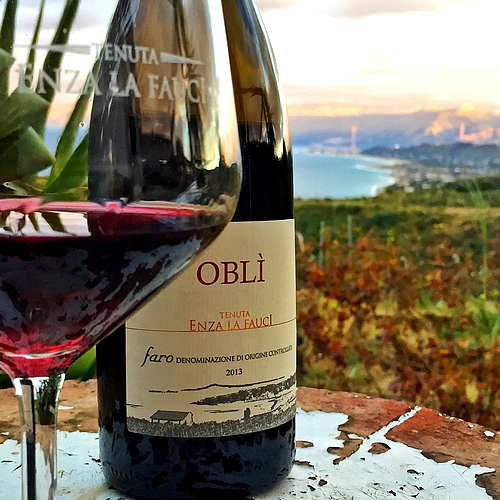 THE WINES – Four labels of the company (plus three brandies), that in its logo plays sirens that, in Homer's Odyssey, tried to enchant Ulysses with his hand right in the sea off Cape Peloro. The link with Sicily is visceral, He is seen clearly in all labels that are inspired by the mythology of the place, the Scylla and Charybdis, and to the orography of the panorama. Oblì Lighthouse Doc is undoubtedly the leading wine cellar: aged one year in oak barrels and then in bottle from 6 to 9 months, with an expressive power, worthy of the finest French and Italian reds. Oblì is a wine with intense aromas and good acidity, that makes it suitable for long aging. His label speaks of the Strait of Messina and plays the viw by the hills on which the winery. 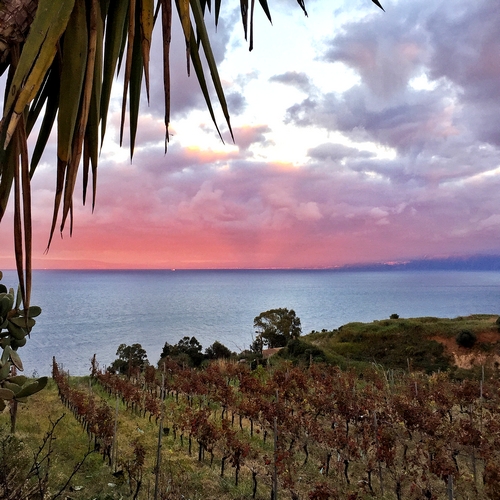 A note of thanks also to the White “Enchantment”, wine produced with grapes of the type “Grecanico”, coming from Mount Etna, at 1,200 meters high. A classy wine, fermented and matured for a short time in barrel, before going into bottle. The cultivation of these vineyards is entrusted to local growers that supply for several years the grapes to the winery of Messina. 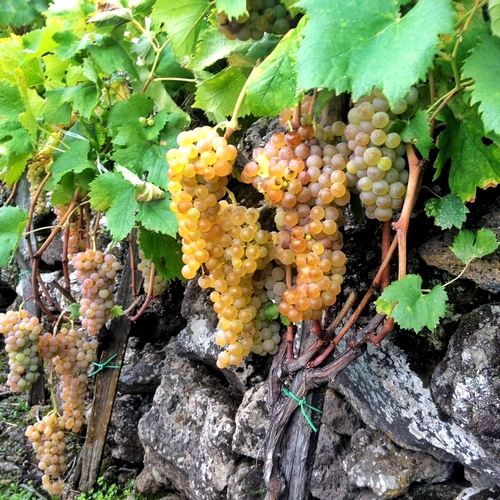 Enza is a tireless woman, like other Sicilian wine producers. Is’ always you, in the first person, to travel the world to promote their wine cellar, his beloved Sicily and wine Made in Italy. Among his recent projects is the recovery of the grape Raisins of the Strait of Messina, called in Sicilian dialect “u zibibbu du Faru”. When I visited the estate, the workers were intent on freeing from shrubs and reinforce a terracing, to be able to plant new vines of Zibibbo. This will be the new challenge. This rare grapes grew in the area of the Strait of Messina right on the sand, near the sea. Local farmers were a sweet wine, but over the years its cultivation was abandoned. 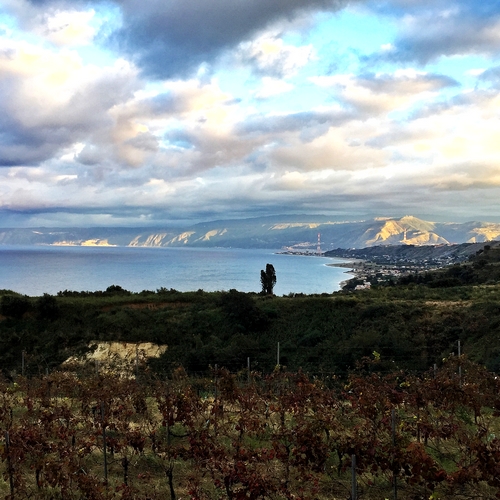 Enza, building on his grandfather's tales, around in the early 2000s was able to recover this vine raisins, literally knocking on the doors of peasants ' houses: Some were more collaborative, other less, but Enza still managed to find what she was looking for and, from 2012, produces the “White Houses” (the name of the White House that grew the grapes, where as a child I spent wonderful summers by the sea). This is an Igt Sicilian lands which was awarded several times by critics of Italian food and wine. But, for Enza, the greatest satisfaction is making this zibibbo recovered with fatigue can be recognized as a grape variety permitted in the province of Messina, as for now it is only in the province of Trapani. Meanwhile, Enza decided to plant 2,800 plants to get from the current 1,800-2,500 bottles of white houses about 6.000 bottles. She believes in its territory. And also I.

Dear Ada
Thank you for the hours spent together in the cellar and to have devoted to my work your wonderful pen. I love the way you write, simple, direct, immediately without mincing words . Know and write about what you value and love !
Certainly the “Sicilian ” – that we have in common- reflected in what you do , in the dishes you propose and colors you choose : intense flavors, strong shades, never banal’ and a lot of authenticity.
Thanks for your effort !
Ithout The Jaws

Hi Enza, the pleasure was all mine. I never thought I'd see a company so interesting within walking distance from my house, or to find a wine that raisins I was eating from small to White House. See you soon, ADA

How many memories, How many perfumes, raisins, the harvest,the wine as it once was. Brava!!! greetings to you and to my former schoolmate.

Hi James, Thank you and welcome. Best wishes to you.