Surprise Belgium at mozzarella 2015, Here are my favorites

From the simplicity of Roberto Petza gastro-cultural locations and Pino Cuttaia Massimo Bottura passing by Sang Hoon Degeimbre harmonies and refined soul of Kobe Desramaults. The mozzarella 2015 opened and closed at Paestum in an equilibrium played on Antipodes: tradition and innovation, simplicity and extreme processing, innocence and disguise. A Carnival of items, some of them aren't going to probably the sign, others who will remain in the memory: everyone has put in the foreground the mozzarella di bufala campana Dop.

As expected (as always masterfully written by Albert Know and Barbara Guerra) onstage alternated Italian and foreign chefs who gave their own interpretation of an ingredient on which everyone agrees extraordinariness. Less agree are the chefs on how to use the mozzarella: There are proponents of purity, What Igles Corelli that you are voluntarily limited to, seasoning in a complex game of modern techniques, or Roberto Petza who presented it to the natural into an extraordinary sweet with no added sugar, or pasta ' combined ' Rosanna Marziale. Then there are the chefs that interpret not only mozzarella, but usually the traditional Italian cuisine or even your memories, transforming it into gel for a baked pasta without oven vegetarian seitan ragù based (Cristina Bowerman), in a grated cheese which is of white eggplant (Heinz Beck), in a cloud of flour mozzarella milk obtained through expert athletes that only proceedings Massimo Bottura can describe poetically.

In my two days in Paestum I tried to taste the dishes that I was curious about, to learn something from great chefs but obviously I couldn't be everywhere (I'm gearing up for the ubiquity). I found perfectly centered, the dishes of two foreign guests, coincidentally and remarkably both of Belgium, that in my personal ranking win two of three places on the podium of the best dishes: Korean chef Sang Hoon Degeimbre and Kobe Desramaults. The plate of Degeimbre, vegetarian, is a contemporary platter, delicate aesthetics, varied and perfect which corresponds as much variety and perfection in the flavors, played on complementary tones of acidity between dairy (the Government water and mozzarella), Kimchi, fermented vegetables, mashed Jerusalem artichokes and herbs.

To Kobe Desramaults, already seen and appreciated at Gulfood, This is a dish that reinterprets the remembrance of childhood pairing between potato and cheese, using the technique of cooking the potatoes inside a shell of clay and using herbs as Shamrock, collection in the pine forest of Paestum; Kobe mix potatoes, leeks and gorgonzola in a tasty cream Buffalo covered with the skins of roasted potatoes and leeks.

The third dish that for me the podium is to Roberto Petza: a sweet, but also a delicate appetizer, where mozzarella is served at natural in a red orange juice, fresh almonds, Green apples in infusion of Shamrock, tomato and a fresh Green Apple sorbet and Shamrock. A dish from simple technique, as admitted by the same Petza, who explained to want to do a kitchen “that gives emotions in eat it”. And succeeding perfectly.

Mentioning the Sicilians Pino Cuttaia, I had the honor and the burden of open Congress, and Ciccio Sultano. The first used the ricotta and the mozzarella didn't, to create a very simple dish: a fake egg where the ricotta fakes egg white, with an egg yolk (everything then steamed a few moments), wild herbs, beans and asparagus just blanched, pea cream, tuna ROE and leaking. The dish pay pledge only to an excess of flavor.

Ciccio Sultano confirms its vocation inspired by Baroque tradition with an artichoke, roasted (the Firebox) about Buffalo mozzarella, tomatoes and candied peppers with honey and sugar syrup, Sicilian chicken broth (prepared with Marsala) and white truffle. Also here a nice plate, Perhaps the most tasty and close to human vision of a cuisine that aims wants to surprise, but also satiate.

A little less convincing performance of delightful and overwhelming brothers Costardi, that last year I was excited. This time they prepared two dishes, the first of which left me puzzled: a noodles cooked in a liquid made from 70% of normal water and 30% water buffalo's governing and then rested still in Government, with San Marzano tomatoes, Basil Pesto (without garlic), powdered capers, hot pepper extract and a creamy mozzarella that is burned with the stem to become stringy before being served. The non-optimal serving temperature (too cold) and excess cooking liquid into the pot didn't help the preparation. Spot on the main course, pasta cream (or better made with milk in which the pasta has cooked for an hour and a half to 70 degrees so as to yield flavor), Crispy meringue, mozzarella and tomato cream.

Two large trials and research those Cristina Bowerman and Heinz Beck. The chef of Restaurant Glass, only woman chef Ambassadress of Expo 2015, prepares a dish where the study and passion for experimentation leaked from every step, Although summon baked pasta and then present a very different dish is always a risk in the traditionalist Italy. Cristina has prepared seitan starting from strong flour and so rich in protein and, through various stages, came to get a loaf that baked in the buffalo milk. So he chopped it all getting the texture of the ground and has prepared a traditional sauce. He smoked barbecued tomatoes to give the note ' burnt ' typical of baked pastry crust and filled with ziti (Here too penalizing cooking, definitely excessive, pasta), with a gel of Buffalo mozzarella (a little flavor in mind though in the pot). Finally, he smoked and crumbled some pasta with tomato to reinforce note burned completely.

The-winning Heinz Beck, always humble, sympathetic and measured, confirms its vocation not only of great chefs but of keen scholar with a huge respect for the raw materials and the health of their guests and prepares a dish inspired by the idea of caprese and a Parmesan. The first are the tortellini with Basil stuffing (blanched, past in ice, blended with extra virgin olive oil and then past in liquid nitrogen) on a tomato water buffalo mozzarella and dehydrated butter buttery. The main course, I loved the freshness, the balanced acidity and lightness, are white eggplant (cooked in the microwave every 30 seconds) on a tomato water slightly transparent linked (with kuzu, a Japanese root which is also a gastro-protector) and a crust of mozzarella, croutons and parsley in this case made with liquid nitrogen.

Interesting and technically the mozzarella of souffle Ernesto Iaccarino, facing the great challenge to ' tie ' water in a preparation that sees as its main enemy. Is, while enjoying a light soufflé, with a stringy mozzarella, It tells of three months of experimentation in the field of thickeners to an excellent result. Only downsides the lack of flavor in the dish: puffed noodles, the tomato, the snow of mozzarella and basil pesto is not enough to give that little bit salty which would increase the excellent souffle.

Give it up for sweet sweets Jacques Genin, presenting a Choux pastry with ricotta di bufala, cream and sugar-free buffalo milk in the filling, with extra virgin olive oil and Basil glaze and a bowl of beetroot and Buffalo ricotta with sprigs of anise and beetroot. When taste, Health & sophistication meet.

To close the event is Massimo Bottura. The public wants to be surprised, expect the coup de theatre and gets it: chef tristellato you give generously, talks about his visions that are food but also cultural, share what stimulates and inspires him and talks about a topic that is close to our heart, recycling. Because the eleventh commandment is ' don't throw '. And we all agree. Then comes the art, that always motivates and helps create: mozzarella di bufala blends with paintings by Andy Warhol on trans gender of the East Village and ' the Buffalo who wanted to be hoax ', allusion to male bovine animals that no one loves and that nobody wants because they do not give the precious white gold needed for mozzarella. And here is that Bao pulls out the main ingredient: the balls of Buffalo. "Si, balls, testicles. In a literal sense, Why are nothing more than a fleshy part of the animal and, as such, designed to be eaten. Someone laughs, someone shelling eyes: today will eat Buffalo balls. Toss with oil, garlic, red pepper and parsley and then cooked at low temperature and thinly sliced, set back on a Mediterranean broth of herbs, olives, Capers, oregano and creamed with oil, Sprinkle with lemon burned powder (way too present, too sour, much to undermine dangerously the end result) and garnished with a mozzarella flour cake (It draws milk from mozzarella, It bubbles up to make out the fat, It dehydrates the liquid to create a serum that rehydrates flour with Buffalo getting a foam siphon on and bake like a meringue).

And if Buffalo wants to become a dad?, the second plate of Bao is a wants, but maybe I can't, Why is North who wants to become South: tribute to the pizza that is evoked in the scents with ingredients that have nothing to do with pizza. The pizza dough is baked polenta, cooled, sifted with buffalo milk and then dehydrated, then rehydrated and cooked in the oven until they become crispy little spikes. Tomato concentrate is baked with oregano to simulate the dense burnt pizza tomato, There are bits of anchovies and mozzarella is simulated by a risotto cooked in a broth of mozzarella (like the legendary cheese and pepper risotto). An interesting dish, where Mediterranean scents are strongly. But can the North really become South? Maybe not, and maybe not even want it. 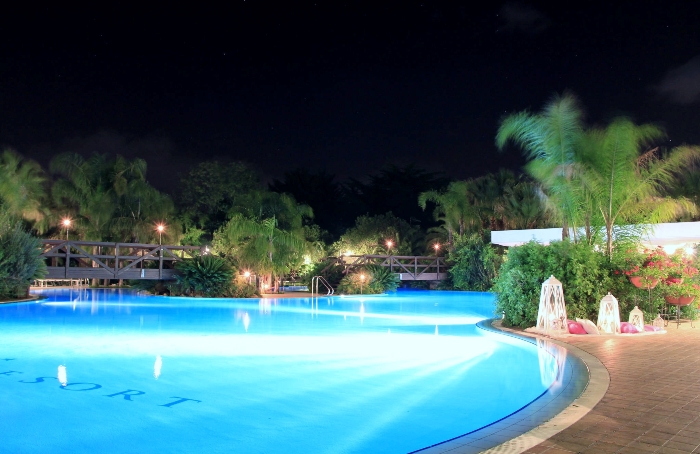 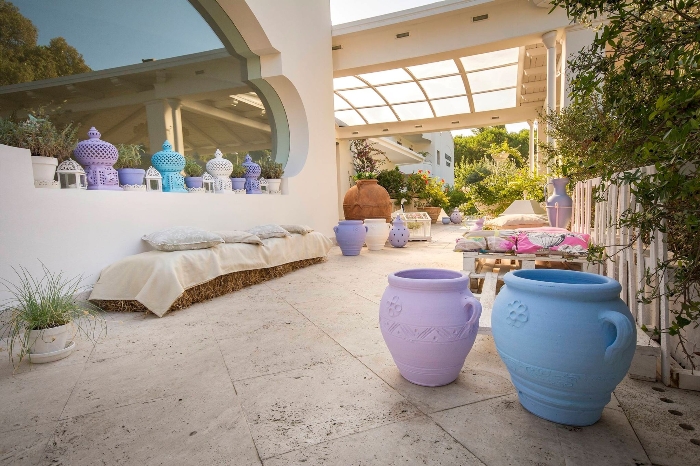 WHERE TO SLEEP: This year I chose l’Oleander Hotel Paestum, a lovely resort in the pool I would dive for two years with no luck, given that the mozzarella is a full-time commitment. This year I got to try the restaurant also, where you can enjoy refined regional cuisine revisited.