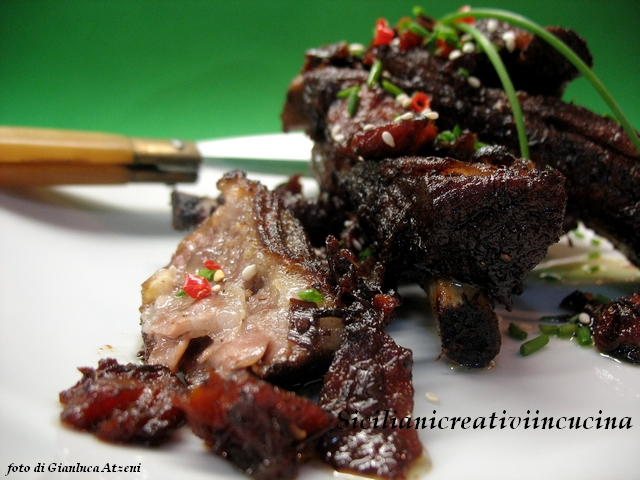 ribs (spare ribs) spicy and spicy pork: I am presenting a dish almost exotic, I'm just not able to tell which exotic country I've got the idea. I'm not gone mad, is that I made these pork chops by putting together a number of ingredients from different culinary traditions and that, in my mind, you could match well with each other and with the pork: I used soy, Ginger, the rice vinegar, coriander, the curry, sweet and spicy paprika, cinnamon, fennel seeds, soft brown sugar, sesame seeds, honey, the chilli and chives. The marinade for 3 hours, Browning in a pan to seal the meat and baking, 2 hours at 180 degrees, make spare ribs may lose all the fat, absorb the aromas of spices and become so tender and soft the meat falls off alone from bones. The flavor is really good, I can't explain it in words: a balance of sweet and savory, spicy but not too.

a spoonful of chestnut honey

a pinch of curry

a pinch of paprika

a teaspoon of fennel seeds

The ribs should marinate in spices for at least three hours (but also throughout the night). Then, put the ribs in a large roasting pan that contains all comfortably. Pound in a mortar (I use one in stone, if you don't have it you can use a batticarne or blend the whole thing) coriander, fennel seeds, grated ginger, spicy and sweet paprika, the curry, brown sugar and cinnamon, then mix everything with honey and rice vinegar so as to form a thick paste. Smear the paste obtained the mortar on the pork ribs, then join the star anise, soy sauce, the chopped chilli and chives, carrot and Leek cut into fairly large pieces and the cloves of garlic. Cover with plastic wrap and let marinate for 3 hours or overnight.

Preheat the oven to 180 degrees static. Put the oil in a pan, heat and cook the ribs over high heat: as and when the ribs are golden (should make a nice crust), put them aside. When they are all browned them back into the Pan and combine all the marinade, do take heat, and add vegetable broth. Season with salt (taste the sauce and keep in mind that when it shrinks the flavor will increase and that there is already soy sauce in the marinade) and pour into baking dish. Bake for 2 hours, checking the cooking from time to time, stirring the ribs and spraying frequently with the sauce. When the meat is browned and comes away alone from the bones, will be ready. At this point, a last step in the Pan, over high heat, to make the sauce and frosting narrow well spare ribs.

Serve the pork ribs with their salsa, Sprinkle the platter with chili and chives finely chopped and toasted sesame.

MATCHING: We suggest a wine from Umbria: the Sagrantino di Montefalco Docg produced by Winery Antonelli San Marco, Vintage 2006. A dense wine, hot, with strong hints of spices, the palate is full, with a very definite tannins.

Cherries cake and sugar of...

Hi Ada,
This dish must have a wonderful scent!!!
achievements for the contest!!!
Hi

Hello Elisa! The smell was there, What I can't tell you because it was really rich in spices, but it was good! Thanks and welcome! ADA

I love madly pickling and I always do! This mix of spices and ingredients should be like a fabulous formula!
Thanks Ada!
recipe inserted!

Thank you. It will seem absurd but I started to mix flavors, thanks to your contest. And I won't stop more, too funny. A hug, ADA