Stringy spinach in a pan 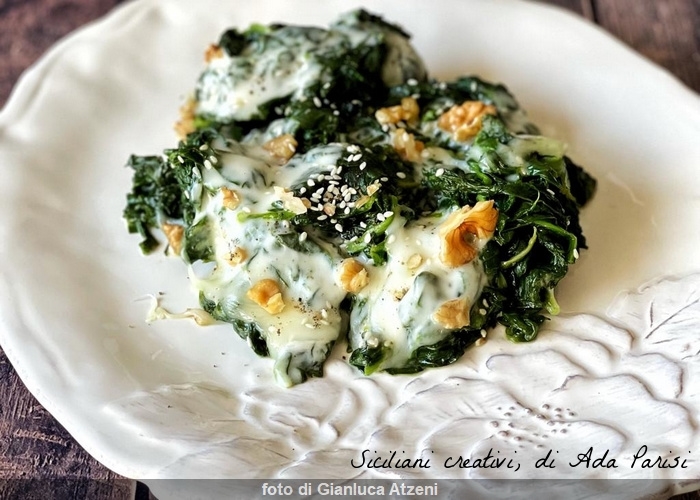 Stringy spinach in a pan: I call them “44 pan jumps” for obvious reasons. Recipe of an absolute banality, but with some useful advice to make the best use in the kitchen a joker like frozen spinach. On my YouTube channel you will also find a very short video tutorial on how to prepare stringy spinach in a pan. I'm not a big consumer of frozen products, because I love going to the market and choosing what the season offers me. But I always keep a few things in the freezer: the peas, Spinach, the chips with sticks to be baked on the fly in the oven. With spinach, For example,, you can prepare the SPINACH RISOTTO WITH BÉCHAELLAE, oppure i CANNELLONI SPINACH AND RICOTTA. But also the SALMON AND SPINACH LASAGNE or the SPINACH AND RICOTTA MEATBALLS. In short, you have to indulge in.

Frozen spinach: how to use them

First of all, a tip on buying: buy spinach in leaves in small cubes and in the type of new spinach leaf. This type of frozen spinach is much more tender and with few stems, the fibrous part that can give a little’ of annoyance. In addition, smaller are the cubes, the sooner they cook, the more tender they will remain.

Is’ can cook frozen spinach in the microwave, steam or boil them in lightly salted boiling water. Boiling asparagus does not excite me. Boiled, even in a little water, they are impregnated with liquid, become dark and disperse vitamins and minerals in the cooking water. To microwave is enough cook them for 6-7 minutes at a power of 1000 W and to the steam It will take about 10 minutes from boiling water. Both of these cooking methods retain nutrients better Spinach.

My preferred method is in a pan, with a tablespoon of oil or a piece of butter, swithout water, over very low heat and covered. Frozen spinach releases its own water and slowly cooks it becomes soft and tender. Ready to be served as a side dish or used in other preparations.

For pan-fried spinach you only need spinach, a unseasoned cheese that melts quickly, a few walnuts and sesame seeds, that give the crunchy note. I suggest you do not use mozzarella, unless it's 'old’ a few days and rather dry, otherwise it will release too much liquid. Among the most suitable cheeses are taleggio Dop, Asiago PdO, Provolone Valpadana PdO, but also fresh scarmorze or, for those who love the most decisive flavors, Brie or Camembert. Have a good day! 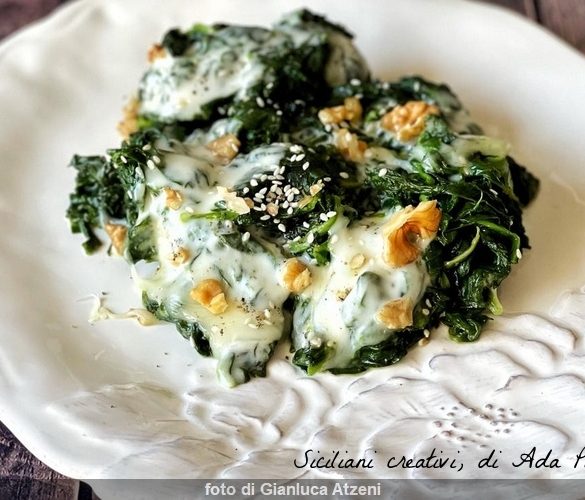 STRINGY SPINACH IN A PAN

nuts and sesame seeds, to taste

salt and black pepper, to taste 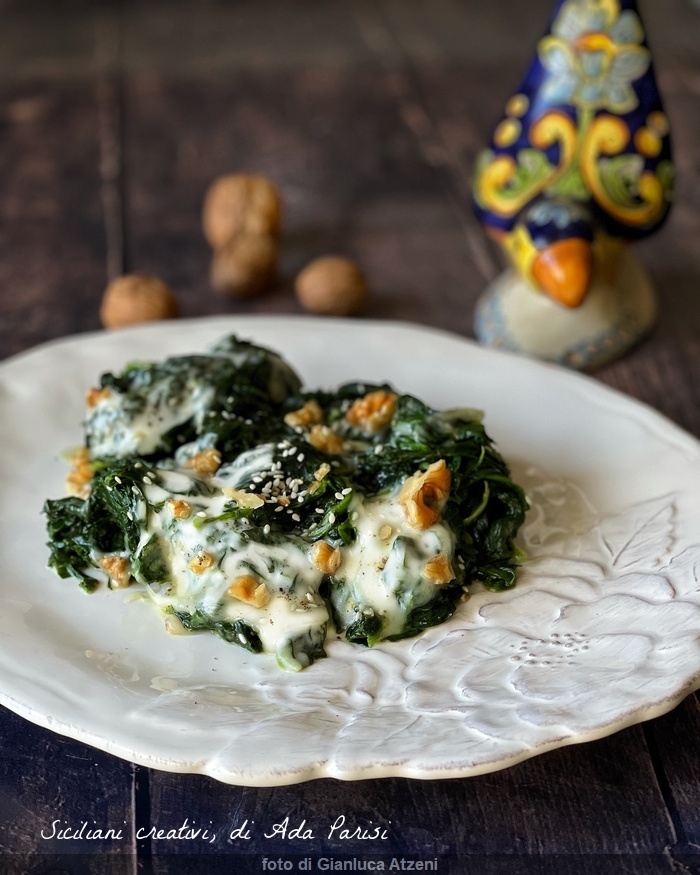 Put the oil and butter in a large and spacious pan (or just the oil if you prefer). Heat the oil and place in a pan, in a single layer, frozen spinach. Add a pinch of salt and cover. Lower the heat to a minimum and cook for 10 minutes. Gently uncover and move spinach with a fork. Cook always covered for another 5 minutes over low heat. At this point spinach should be tender and fluffy, as you see in video tutorial.

While spinach is cooking, lightly toast the dried fruit and cut the cheese into not too small cubes. Spread the cheese over the spinach and cover. Cook over very low heat until the cheese is melted.

Complete the pan-fried spinach with the toasted walnuts and sesame seeds and serve immediately. Bon appétit!

WITH FRESH SPINACH. Of course, you can also use fresh spinach following the same procedure. Wash them carefully and put them in a pan with extra virgin olive oil and / or butter without water and cook covered over very low heat until they are wilted. It will take about 5 minutes, In this case.