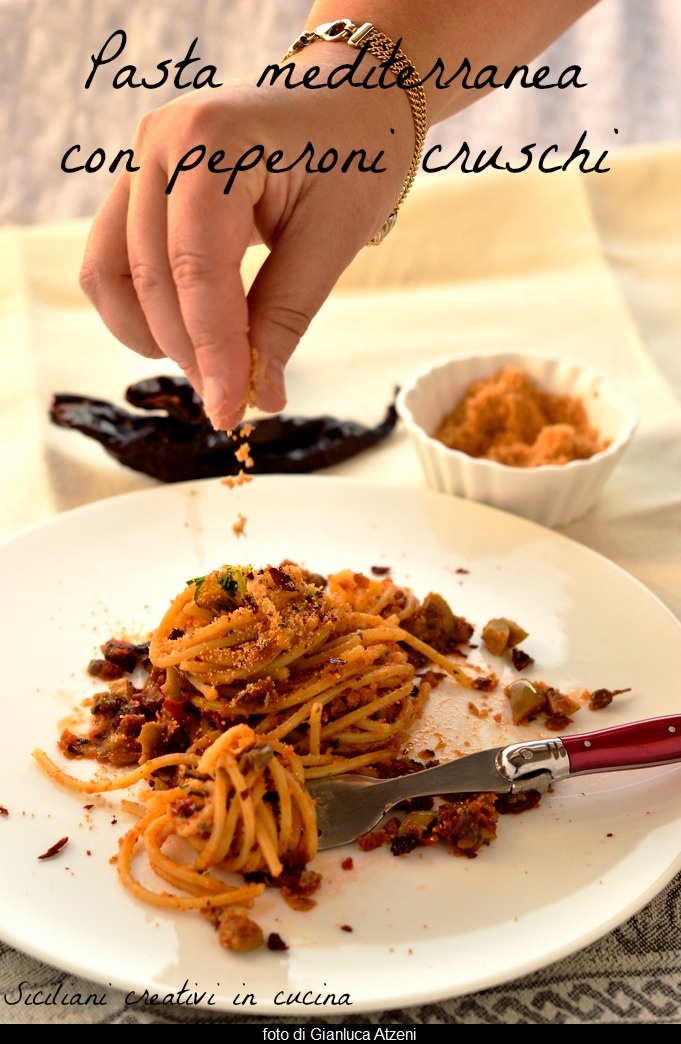 Mediterranean Spaghetti with peppers bran Senise, all the flavors of the South and breadcrumbs: a recipe very easy and with all the flavors of southern Italy, and especially in Basilicata and Sicily. I don't know if you've ever tried the crispy peppers Igp. They are a protected geographical indication product obtained from a particular type of pepper, the Capsicum annuum sweet. This pepper is characterized by a thin skin and a low water content, which makes it perfect to be dried. After drying, the pepper is fried and you use it both as a snack, both in the kitchen. Is’ crunchy, It tastes sweet, slightly smoky and tangy and fits perfectly with all the flavors of southern cooking and then siciliana, from Sun-dried tomatoes with capers.

I used the peppers bran at first fast flat, because in less than ten minutes the sauce is ready). And I combined the unique flavor of this pepper capers, Sun-dried tomatoes, anchovies, green olives, parsley, tomato paste and toasted bread crumbs. That's why I called them Mediterranean spaghetti with peppers bran. I assure you that, Despite being a first course ' poor ', some’ like the SPAGHETTI SICILIANA or those SPAGHETTI ALLA CARRETTIERA, it is tasty. And no one will understand that you have done it in a flash. If you like, You can replace the toast with a sprinkling of ricotta cheese lucano, just to stay on topic. Alternatively, try also my RISOTTO WITH RAPE CIME, PINE NUTS AND PEPPERS cruschi, elegant and delicious.

360 grams of spaghetti
6 anchovy fillets in oil or salt
10 dried tomatoes in oil
little chopped parsley
a slice of stale bread
20 green olives in brine
2-3 crispy peppers Senise Pgi
1 tablespoon of tomato paste
a small piece of chili pepper
a handful of capers
half a glass of white wine
salt and pepper, to taste
one shallot
extra virgin olive oil, to taste

Coarsely chop the capers, the green olives and dried tomatoes, then the onion. Chop the bread (with a knife to get crumbs larger or smaller crumbs with a food chopper). Toast it in a pan with a splash of extra virgin olive oil and a pinch of salt. Crumble the crispy peppers.

Sauté the onion in a pan with extra virgin olive oil, up to soften slightly. Combine the chili (also chopped and with seeds if you like it spicy), the anchovies and tomato paste. Stir until the anchovies have dissolved and amalgamated with sauce, then add the parsley, Capers, olives and dried tomatoes. Skip one minute, Deglaze with white wine. Evaporate the alcohol and fix salt and pepper, Add half the tomatoes crispy and a spoonful of toasted breadcrumbs. Cook for a few minutes and set aside.

Boil the pasta and drain it al dente, setting aside some of the cooking water. Sauté the spaghetti in the pan with the sauce and some cooking water, to obtain a perfect mix. Sprinkle the dish with a little bran peppers and toast and serve immediately. Bon appétit!

MATCHING: This recipe has a marked tendency in flavor, that derives from capers, olives, anchovies and dried tomatoes. Try, then, to combine a refreshing beer and light. Of course siciliana. Beer Trisca, produced by the brewery Tari, di Modica: lovely fresh finish, with notes of citrus and Spice. In the recipe there are coriander, Ginger, fresh basil and wheat russello: an ancient Sicilian grain.

They look great these peppers “crispy. Great products for a great dish.

Thank You Cynthia, Yes I do have a little’ the small Italian agrifood excellences fixed and I must admit that I fell in love with crispy peppers. You are so kind to pass by me. A warm greeting, ADA