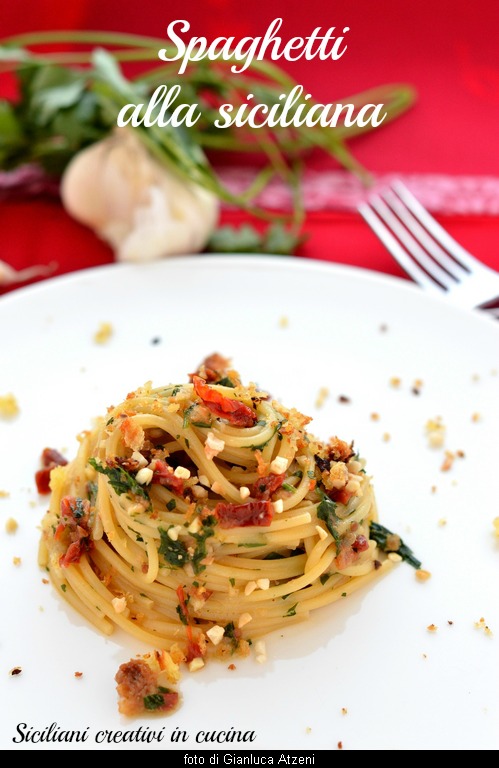 Spaghetti alla siciliana: a simple recipe, indeed very simple, and by surprising speed. Is’ a penniless but sauce contains many ingredients symbol of Sicilian culinary culture, which is made of poor but tasty items, that combined together give each time a minor miracle of taste. This, in Sicilian, It's called pasta with ' anciove and muddica ', that is, with anchovies and breadcrumbs, who are the two fixed plate ingredients. Look at VIDEO RECIPE on my YouTube channel and you will love it.

Then, from time to time, to the Sicilian spaghetti the farmers added what they had in the pantry: I added sundried tomatoes, Capers, parsley, black olives and almonds. In short, you can enrich it with everything you have in the pantry or that you need to consume. The important thing is that the oil is a high quality extra virgin olive oil and that the pasta is al dente! In Sicily it is the most popular pasta for a spaghetti with friends organized at the last moment, because it's simple and tasty.

Is’ a peasant recipe, but very yummy and I think represents perfectly my land. Do not miss all my SICILIAN RECIPES, from traditional and notes to those you find preserved only in the Sicilian houses. And follow also on my cYouTube. Have a good day. 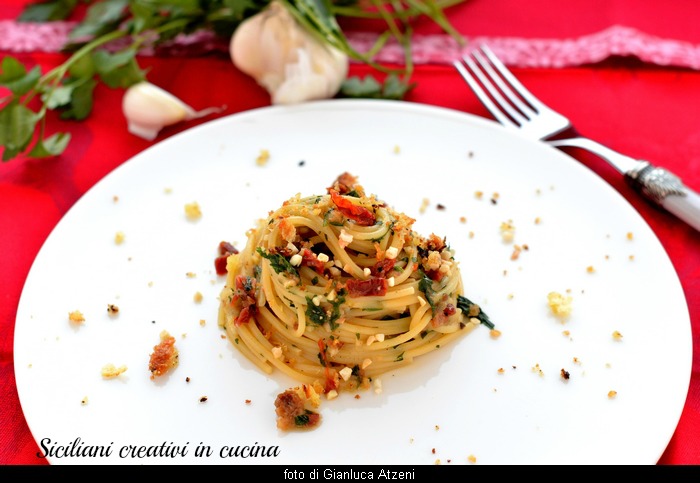 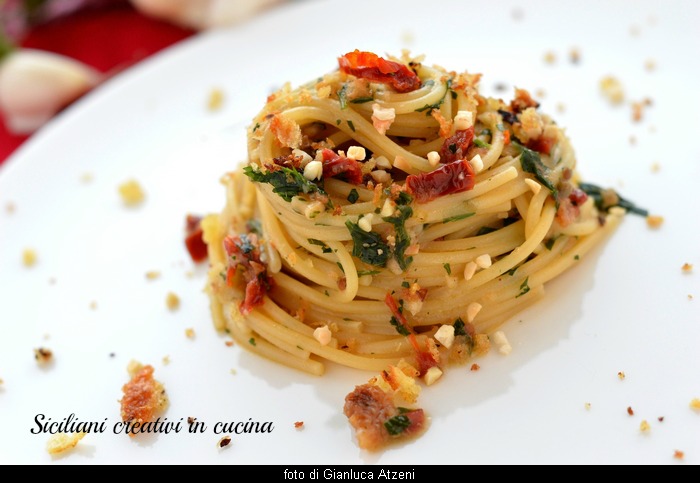 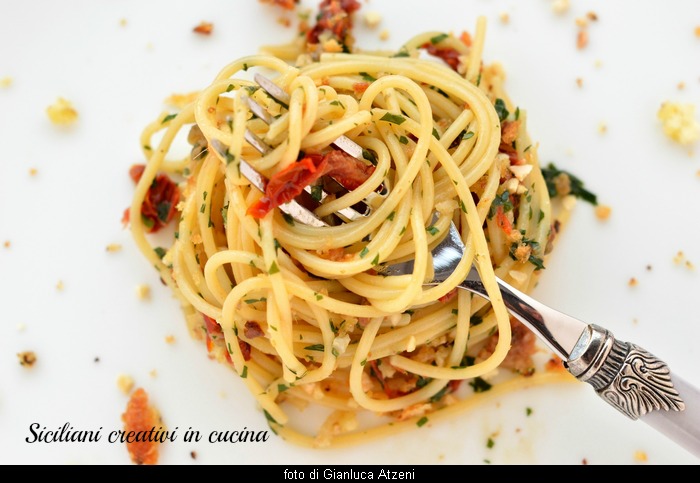 chopped and toasted almonds or pine nuts, to taste

a slice of about 120 grams of homemade bread or breadcrumbs

a handful of black olives

a dash of white wine (Optional) 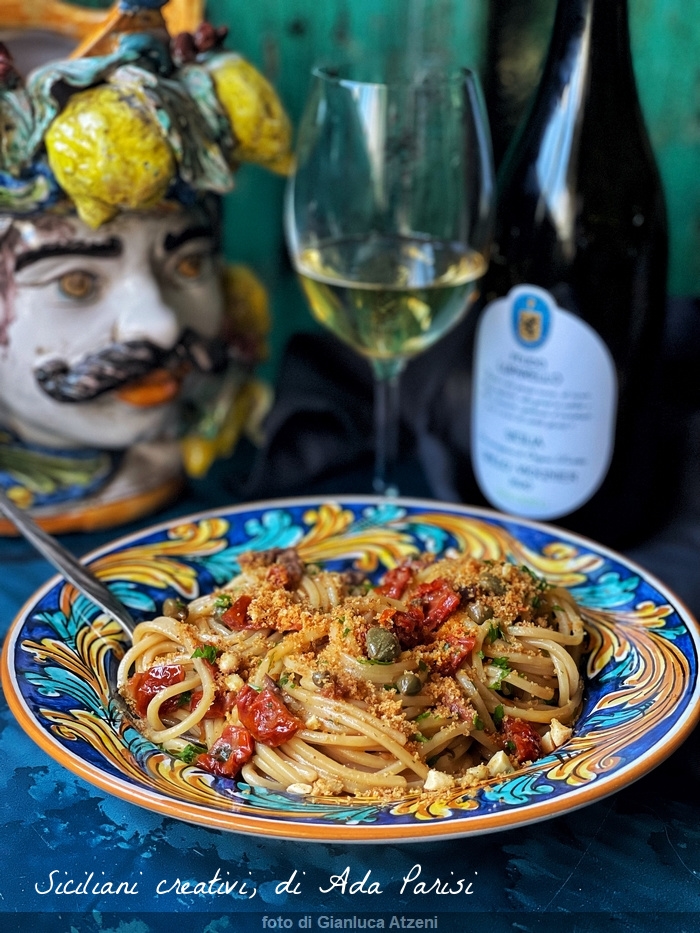 Finely chop the parsley, peel the capers under the water and coarsely chop the dried tomatoes. Put extra virgin olive oil in a pan (the right, do not hold back but not exaggerated) and garlic, heat over low heat and, when the oil is hot and you start to smell garlic, Add the anchovies in oil. Turn up the heat a little and stir until the anchovies have melted, then add half the parsley, capers and Sun-dried tomatoes. Cook for one minute on medium heat and put aside.

Coarsely chop the bread, both the Crumb is the crust, and fry it in a pan with a little olive oil until golden and crisp.

Boil the pasta and drain it al dente, then keep it in the pan with the sauce and some cooking water. Join the rest of the chopped parsley, ground black pepper, a little toasted almonds and grated bread.

Serve the pasta garnished the dish with the remaining almonds and bread crumbs, and Bon Appetit!

MATCHING: The white wine that we suggest to match this recipe won the Oscar del vino 2015. It's a Chardonnay, produced in Sicily by the company Pocket of Almerita: It's called Scafani County Chardonnay "Vigna San Francesco". The vines are planted about 500 meters of altitude, the grapes are harvested in August and fermented in French oak barrels, still aged for eight months in barrels and, subsequently, in bottles for six months. It is a wine that smells of exotic fruit and vanilla; the taste is soft and smooth. In this recipe, bride both toasted almonds, both the flavor of tomatoes, anchovies and capers. To try.

Cream of dried beans and beets

Thanks Fiora, try it, I'm sure it will please you and the Americans. In fact the dough as you call it at Syracuse…. A hug, ADA

First of all congratulations for the tour that you're about to start, I will follow you with pleasure. Is’ an experience I'd like to do, Immerse yourself in the culture of a people is exciting and evocative. In Calabria are spaghetti “anchovies and moddica”: savory!

Very good as all your dishes but always take note of what I like more but I do them if I have to open the stove too hot pretty fast :-((
I did yesterday chickpea (in box) I just switched to fast paced FRY cipolotti celery, Salt, two small calamari. Removed, toss the chickpeas with their liquid, papá, 5 minutes.
Left there and when lukewarm smoothies. A dash of anchovy sauce, squid cut, toasted bread slice Pan away with them with a tad bit of oil. We had two dinners. Ahahaha ciaoooooo Kiss

My dear Hedwig, aside from that the hummus was supposed to be great, in any case this paste can be prepared in less than 2 minutes, so no excuse even on lighting the stove! I kiss you. ADA

I will follow you for a few years through your emails. Your recipes are delicious especially when it comes to your Sicilian and passion for our land. Good return home. A warm greeting. Salvatore

Hello Savior, you made me a compliment beautiful. I love Sicily, I hope you see, and I try to put a pinch in everything I do. I like to think that the combination of several ingredients in a pot is the mirror of us Sicilians, the result of the various dominations, several stories, they have merged into a beautiful harmony. Thanks again, ADA

Wonderful this recipe, and then it can also be used to flavor a pasta salad!!!

Hi Mila dear! Thanks! And Yes, I love her very cold: the flavors explode and balance even better. A sincere hug, Thanks. ADA