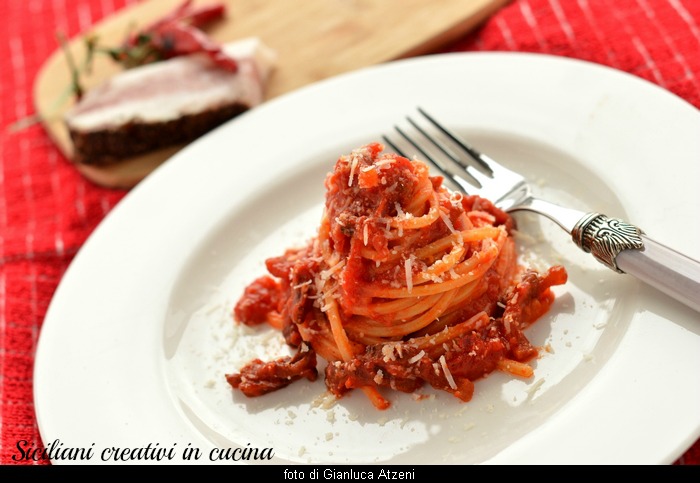 Spaghetti alla amatriciana: one of the flags of Lazio cuisine, together with PASTA CARBONARA and wonderful pasta CHEESE AND PEPPER. The pasta Amatriciana, famous all over the world, He was born in the village of Amatrice, in Lazio and then came to Rome, thanks to the movements of the shepherds who made the transhumance. Despite being extremely simple, this recipe always arouses many discussions both on the ingredients to use, both the preparation method. I followed the recipe respectfully recorded by the municipality of Amatrice. The sauce Amatriciana, In fact, is a Deco, or a “municipal designation”. Is, to take away all doubt, I also shot the VIDEO RECIPE STEP BY STEP, with all my tips for perfect spaghetti amatriciana.

Since March 13, 2020 it has become the Amatriciana Traditional Specialty Guaranteed TSG, with entry in the Register of European origin and geographical indications (Dop-Igp) and traditional specialties guaranteed (Stg).

Initially, the tomato wouldn't fit between the ingredients and pasta alla Amatriciana was black, but since the end of 1700 the swashplate is colored red. The tomatoes must be of the type San Marzano, or broken hand-peeled tomatoes, or fresh when they are in season.

The pasta should be long: spaghetti or bucatini. Another necessary and fundamental ingredients for the recipe is the bacon of Amatrice, to be used in proportion of a quarter with respect to the weight of the dough. Forbidden to use the pork belly.

Pecorino, Obviously, must be to Amatrice, or a good Sardinian pecorino Dop. Do not use the Pecorino Romano cheese Dop in versions too salty, but prefer versions with less salt. Required even the chili, While the use of a dash of white wine you can discuss. And now I wish you good day!

grated pecorino di Amatrice (not what Romano, if it is too salty), to taste 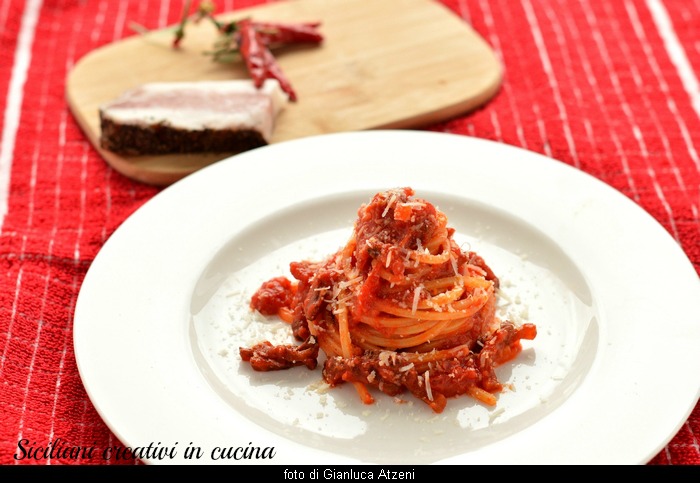 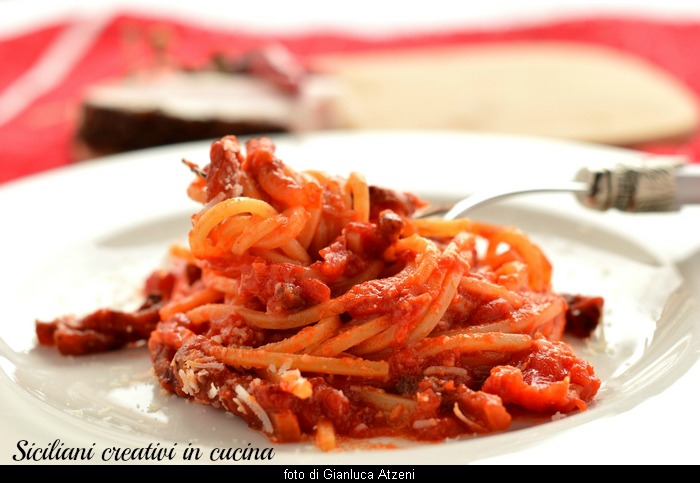 Before preparing the pasta Amatriciana, look at the VIDEO RECIPE STEP BY STEP where you'll let a few small precautions to follow to get the perfect spaghetti Amatriciana. Clean the head and cut it into strips 1 cm thick. Fry the bacon in a hot pan, no other fat until golden and crisp, but not dry.

Put the bacon aside and remove some of the excess fat from the Pan. Add a drizzle of extra virgin olive oil, heat and add the red pepper and the tomatoes. Season with salt. Cook for 10-15 minutes, until you get a gravy well reduced, as you see in VIDEO RECIPE STEP BY STEP. Combine the bacon and then rest.

MATCHING: With a recipe from spicy tomato based sauce and a tendency, we suggest the combination with a young red wine (with few tannins, I do not agree well with acidic items like the sauce) or with a Rosé. We have chosen a Rosé: Vitiano, produced by the company Falesco, in the vineyards between Lazio and Umbria. This Rosé is made from the grapes Cabernet, Merlot, Sangiovese and Aleatico. By fruity, has a good acidity, a softness that goes well with the spicy taste, with a long savory finish.

Tomatoes stuffed with rice to the Roman

Dear Ada, It's a while since I write to you, but I will follow you forever.
I'm very glad for the recipe you abide by the original recipe. In my opinion, any changes you make transforms the dish into something else that should not be called Amatriciana.
Then the good Chaudhary, traditional dishes revisited, should also rebaptized them, type: Spaghetti alla Carletto.
I'm exactly like you do. The only difference is that sometimes the pasta risotto.
Instead, add a little of the gricia grated lemon rind. If you've never done, try it. Is’ very good.

Good luck with your work
Fabrizio

Hello Fabrizio, I'm glad to see you here. I agree that some recipes should be made and respected in their original. Obviously, Since the kitchen is fantasy, I also appreciate the best and most successful variants, freely inspired by traditional recipes, provided it is clear that it is, precisely, of variants. Often I put lemon zest in combination with bacon or bacon, Adds a touch of freshness and reduces excess fat. In Gauthier I've never tried, I will definitely. Thank you and I wish you good day. ADA