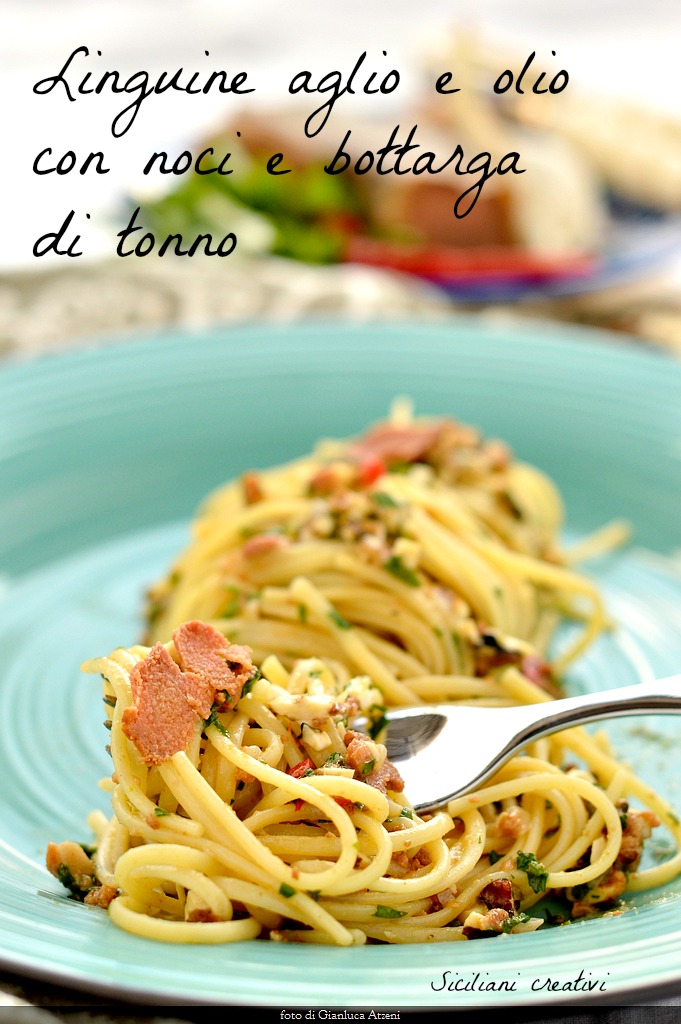 Spaghetti with garlic, oil and hot peppers, with nuts, lemon and bottarga. Today a first course smart, indeed very clever: to make it serve only two ingredients, the walnuts and the ROE. Others have probably already at home: garlic, oil, Chili, parsley and lemon. Obviously the sauce to flavor these simple spaghetti is prepared in 2 minutes flat, but the flavor is really rich and explosive. The scent is unmistakable pasta aglio e olio, a masterpiece of simplicity. But then came the notes of salt bottarga (I used to tuna, but it's fine to mullet), the aromatic and nuts undergrowth and citrusy freshness of lemon.

As Gianluca Sardinian, we always have a piece of mullet roe in the refrigerator, but this tuna I bought in Sicily: It has a more savory taste and a different consistency than the bottarga. It almost seems slightly sandy in the mouth. If you like the roe, take look at my RECIPES WITH BOTTARGA to find tasty risotto, soups and pasta dishes interesting. The Sardinian-inspired but not only.

I do not know about you but to me every now and then, especially on Sundays for lunch or Saturday night, you want a nice simple but tasty noodle dish, of those that you can whip up in minutes. Without losing sight of the taste for good food and a touch of creativity that makes everything good. And the spaghetti aglio olio and peperoncino, with nuts, lemon and mullet are a dish that, in its simplicity, It is really perfect. Be careful though, This is a dish also very suitable for a dinner with friends, Maybe a second fish: the ROE and ennoble him nuts and give it a special touch, I'm sure you will enjoy it and impress your guests. Have a good day! 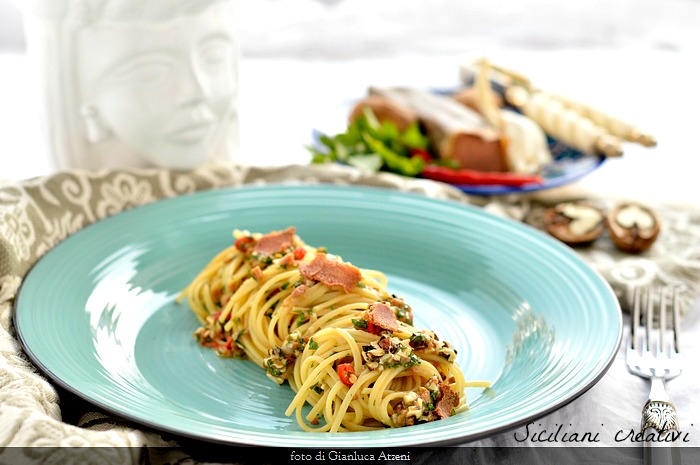 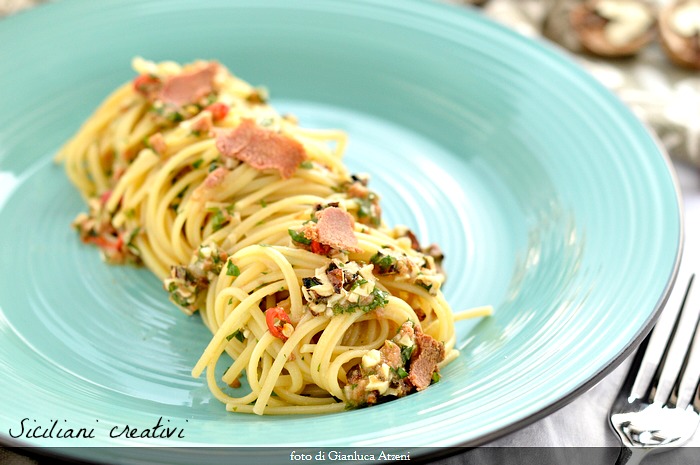 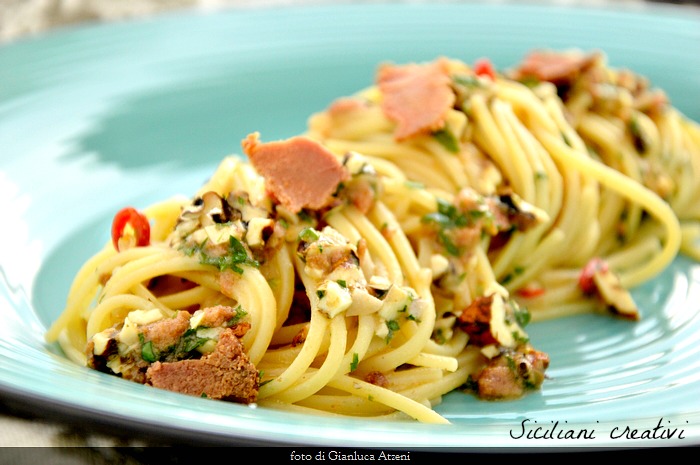 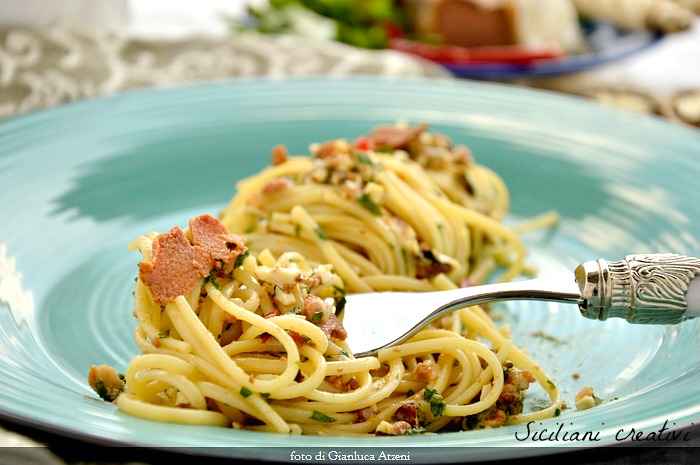 tuna or mullet roe, to taste

a bunch of parsley 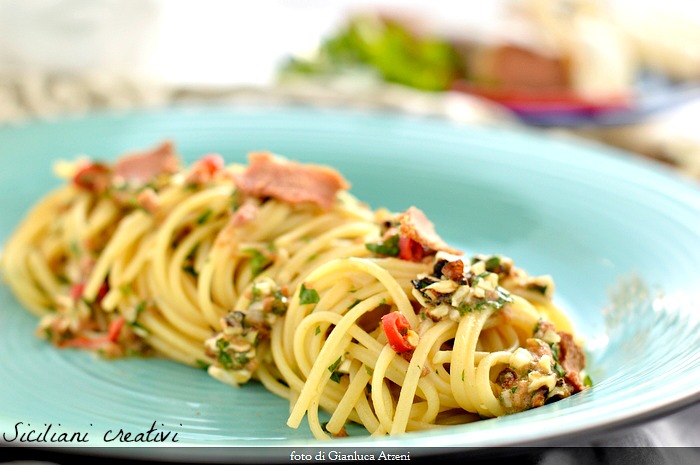 The garlic noodles, oil and chilli with nuts and mullet are really ready in 10 minutes. First toast the nuts in a hot pan, then chop them coarsely with a knife. Grate part of Roe (abundant) and cut the rest into thin slices.

Put in a pan (capacious, so then you will jump the pasta) extra virgin olive oil, the garlic in the shirt (but if you love garlic you can also chop it and then eat it), the chili. Heat the oil over low heat, until you start to smell the sautéed garlic. Combine the chopped walnuts, lemon juice and half the parsley, turn off the heat and set aside.

Boil the pasta in salted water. Drain it al dente and store cooking water. Sauté the pasta with the oil and nuts, cooking water until you get a well-emulsified cream. Turn off the heat and add the grated bottarga, stirring well, then add the rest of the chopped parsley and grated lemon rind.

Serve spaghetti garlic, oil and chilli with nuts and mullet immediately, garnishing each plate with the slices of roe cut previously. Bon appétit!

truly a nice blog! Congratulations every recipe is to achieve, This safe!
Hello and good job
Anto

Thanks Antonella! Is’ my free space, I'm glad you like it. You are very welcome. And of course I look forward to feedback to proven ' recipe '. ADA

Hi,
recipe made yesterday and…. approved by the whole family!
really good, I find that the lemon – zest and juice – exalt to top the dish. congratulations!
Antonella

Thanks Antonella! Lemon and nuts in my opinion give a remarkable sprint and make it more interesting. I'm so glad you liked it. ADA

A great variation of the classic garlic, Olio e peperoncino. Tasty and particular!
Many greetings!
Antonella

Thanks Antonella! If you try it let me know! A hug!!! ADA