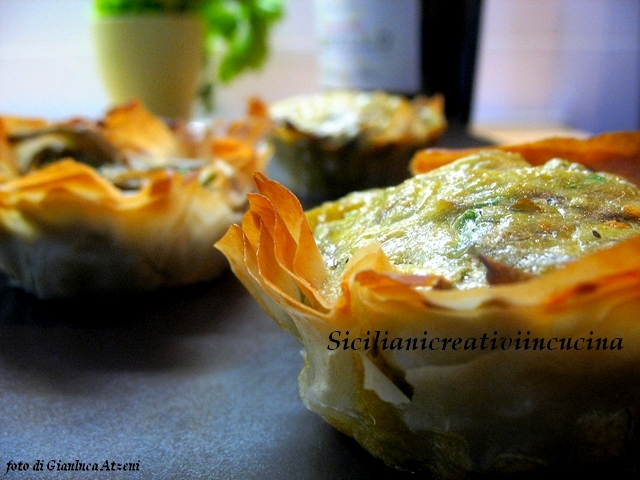 A luscious and easy artichoke timbale enclosed in a crispy phyllo dough, but you can also use the pastry if you prefer. This awesome vegetable season starts towards the end, but some ' violet’ Romana nice soda still lies between banks of the capital's street markets. I couldn't leave them with me and so I used to make a flan, basically an omelette but baked in muffin cups mini souffle covered in a little’ of phyllo dough, that from the container to the omelette and gives her the crisp note that never hurts. Have a delicious second, but also a good finger food for an aperitif or a light appetizer…

Clean the artichokes, by removing the outer leaves and tough and ends, then cut them in half and remove the internal barbette. Finally, place them in a bowl with water and lemon. Put in a Pan pan the oil and the garlic clove and warm up, then add the sliced artichokes. Season with salt, pepper and cook for 10 minutes, adding a little warm water if necessary. The artichokes must remain ' al dente '.

Preheat oven to 200 degrees ventilated. In a bowl beat the eggs with the Parmesan, pecorino, parsley, some’ salt and pepper and add the artichokes. Mix well. Grease the ramekins and line each stencil with two overlapping pieces of phyllo dough: Insert in the egg mixture and artichokes and bake for 15 minutes (to make sure they are cooked insert a toothpick inside: must come out clean).

THE PAIRING: Lessini Durello spumante brut is our choice in combination with the baked artichokes in Filo Pastry. The Chia, produced by Cantina di Soave, in the province of Verona, is characterized by its floral notes of lavender, for its taste tangy and is ideal with vegetables, in particular as an aperitif.

This looks amazing! Have to try this soon!

Gettung better all the time love this recipe . Thanks.

Thank You Adele…hope they last a little longer because I have a couple more recipes!!!

Awesome dish. Dear blogger am foolowing you. You have got all amazing recipes. Sometimes you can also drop by to my blog. That will be fun.Thanks
Wahsushkitchen

Thanks Sushmita! Sure, I will come to you website to learn something about your food style. I know from Google that your indian recipes (and not only) are amazing! Thanks Ada

I'm always baked omelette ... It's lighter and nn you must turn :-).. I will send you the pictures of my next in baskets of dough.

The look your photos Elena!

What a delicious recipe, can’t wait to try! Following your blog now :-)

Thanks a lot for you appreciating!!! ADA