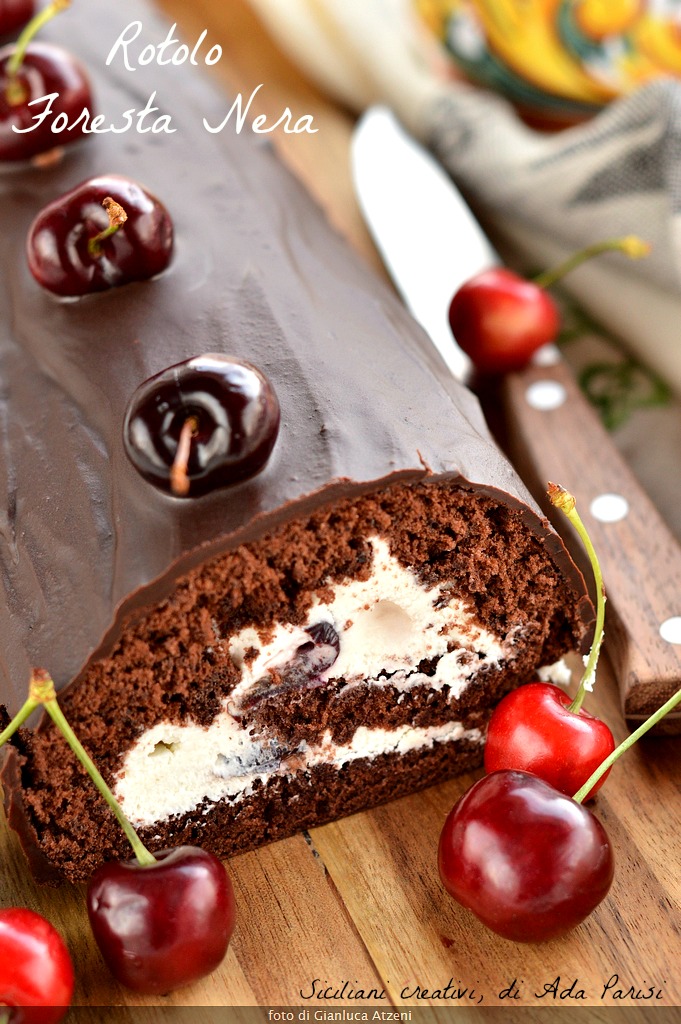 Roll Black Forest: so it seems a bit’ mysterious, but in fact is a free reinterpretation of a traditional German cake, The Black Forest cake, a cake made with chocolate layers, panna montata, fresh cherries and the kirsch syrup. I wanted to make a cake that looked like but it was easy to perform and slightly’ lighter then, since we are in the season of cherries, I only used fresh cherries, thus avoiding those preserved and the liquor. My version of Black Forest cake is then a chocolate cake pan roll (paste biscuit), stuffed with whipped vanilla (Chantilly) and fresh cherries and covered with a base of dark chocolate frosting.

In fact, after having prepared the ROLL MASCARPONE AND RASPBERRIES I decided to experiment with a chocolate base and I got lucky. I only say that it is finished in two hours because it is a roll luscious, soft, fruit rich and strong taste. Is’ true, you have to turn on the oven, but only for 8-10 minutes. For the rest you have to do is whip cream, remove the core to cherries and frosting the roll so that the outside is crispy chocolate slices. I think the roll Black Forest is the perfect dessert to make a great impression on the table, try and say sappiatemi. Dates of course a look at all my RECIPES CAKES WITH CHERRIES (Don't miss the no-bake cheesecake varied) and I wish you good day! 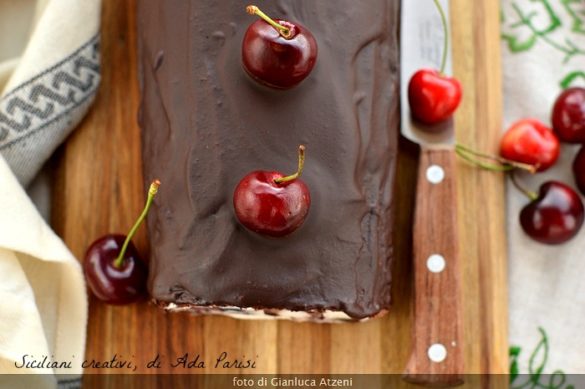 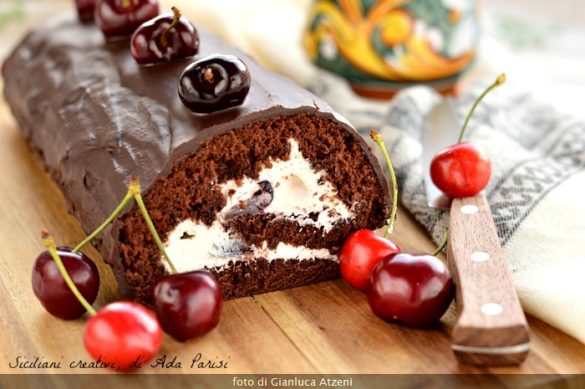 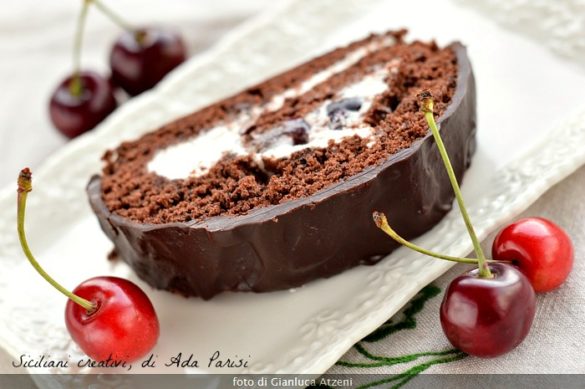 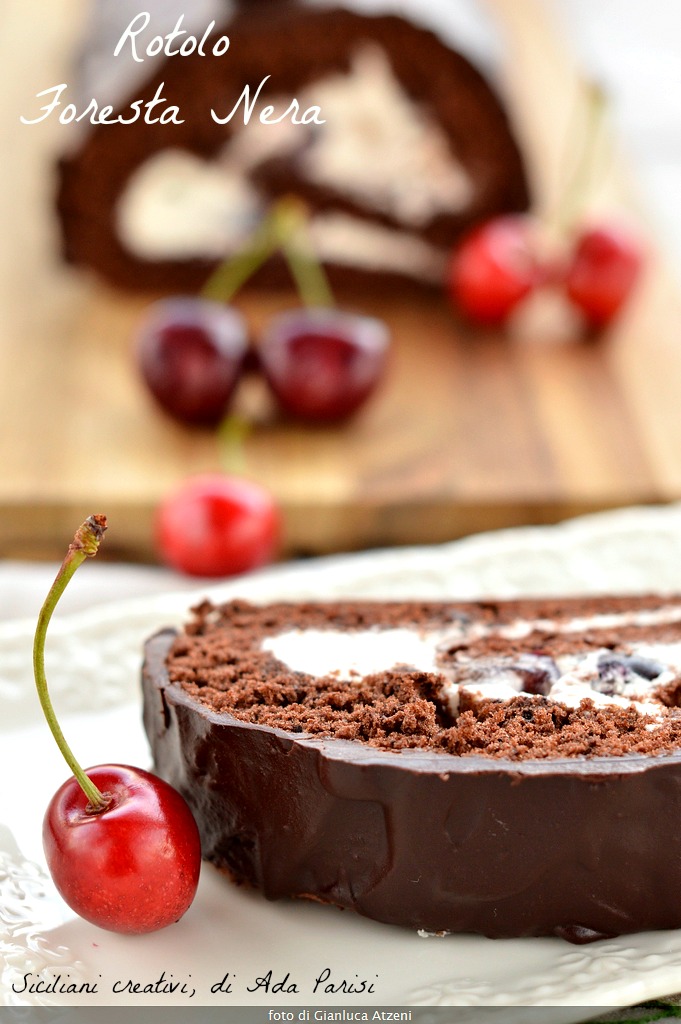 Before preparing the biscuit dough for the roll Black Forest, You need to preheat the oven to 220 degrees static. For the biscuit dough: separating the yolks from the egg whites. Put the egg yolks in a bowl with the granulated sugar and beat until mixture is puffy compound, fluffy and whitish. It will take at least 10 minutes: this is the stage not to be overlooked, because if you mount yolks and sugar long enough the roll will not have enough air to inflate during cooking. When the mixture is tripled in volume, whip the egg whites to firm snow in another bowl. Pour the egg whites into yolks, incorporating the two masses gently with the help of a spatula.

Sift together the flour and cocoa powder and add to the mass of whipped eggs, always with delicacy and always using a spatula so as not to remove the mass. Line a rectangular baking dish with parchment paper (you can butter it lightly) and pour the mixture. Spread with a spatula to a uniform thickness of about 1 centimeter. Bake the biscuit dough to roll the Black Forest and cook for 8-10 minutes. Attention to cooking, because if you bake roll too long you will not be able to roll it up.

While the pasta is cooking biscuit, Sprinkle a cloth with a little granulated sugar. Carefully Fold the biscuit dough on the towel, with the oven paper facing up. Moisten the wax paper with a little cold water (Use a pastry brush) and remove it. At this point, cover with the film for foods and rolled biscuit dough on itself. Cover with another towel and let cool completely the roll.

When the roll chocolate will be cold, unroll and cover evenly with the whipped cream. Spread over the whipped cream cherries and roll the dough biscuit again on itself, being careful not to over tighten. Put the roll stuffed with cream and cherries in the refrigerator for at least two hours.

For covering chocolate: put in a saucepan the chopped dark chocolate coarsely, butter and sugar or honey. Bake in a water bath (that is, you have to put the pot inside another container with boiling water, so that the water does not touch the bottom of the pot) until obtaining a shiny glaze and homogeneous.

Let cool slightly glaze, which must have a still fluid consistency but not liquid, so as to be opaque. Place the roll on a wire rack Black Forest, with a large flat bottom to collect the advanced glaze, and pour over the chocolate icing so that it is uniformly covered. While the glaze is still sticky, garnished the roll cone fresh cherries. Keep the roll Black Forest in the refrigerator until the frosting is not solidified becoming crispy. The Black Forest roll it keeps perfectly, soft and fragrant, for 3 days in the refrigerator. Bon appétit!

One of my favorite desserts
Thanks
A big kiss