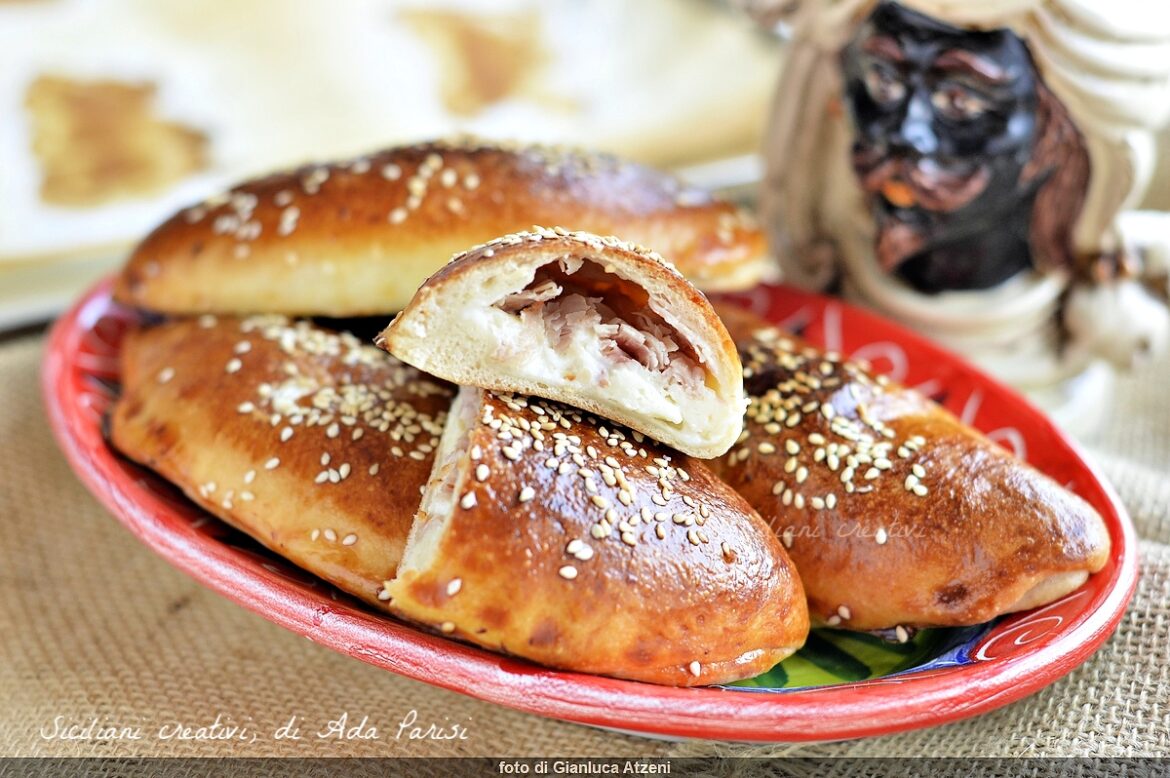 Today a recipe to be absolutely saved, why your children will love them: baked trousers, a typical preparation of Sicilian rotisserie. Made with the diner dough (the same as SOFT PIZZAS) and stuffed with cooked ham and racy cheese. My grandmother inside also put a spoonful of very thick drinks and I put it, traditionally. But it's optional. To make things easier for you, I also shot a short VIDEO TUTORIAL forming and filling of baked trousers. Of course you can customize the filling as you like. In Sicily, the most popular alternative fillings are eggplant, tomato and cheese or broccoli, cheese and sausage. But you can have fun. And if you have to advance dough, try even the mythical Rollo’ WITH THE WURSTEL, that I loved madly as a child.

Beyond the filling, the highlight of these Sicilian breeches, sprinkled with sesame seeds and baked in the oven (not fried like pythons Messina) it's the dough. It is the classic “diner dough”, where lard is essential, which lends softness and a typical taste, also due to a pinch of sugar. You can use brewer's yeast, fresh or dry or even sourdough: a rest in the refrigerator and then away with the leavening. Sicilian baked trousers will be ready for lunch! You can make the dough by hand, but I advise you to use the the planetary, that will make your job a lot easier.

RIPENING IN THE REFRIGERATOR OR RISING IN THE DAY?

You can also skip the rest in the refrigerator and do all the leavening in the day, but I suggest you don't. Resting in the fridge makes the dough more digestible and allows you to better organize your days. Make the dough in the evening, you leave it in the fridge all night and the next morning you let it rise.

But if you want faster rise, on the day, and without the stop in the refrigerator, then you'll have to increase the yeast (let's double the doses) and use a zero-type flour. Like this, after a first rise in bowl until doubling, you can form the rotisserie pieces directly and make them do the second leavening.

At this point, I remind you to have a look at all my SICILIAN RECIPES and I wish you good day! 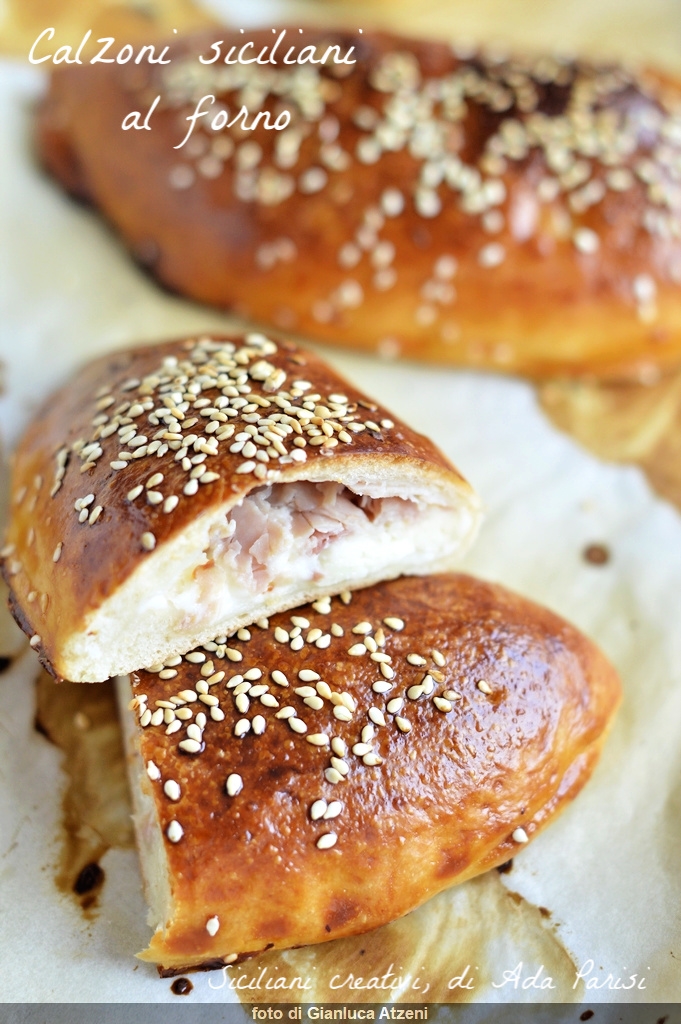 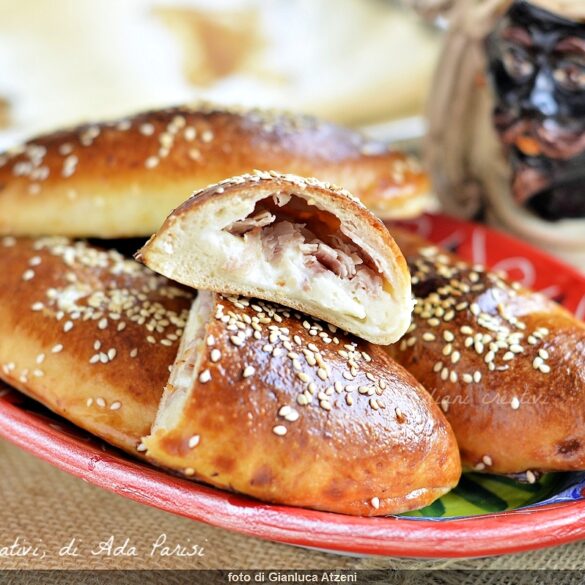 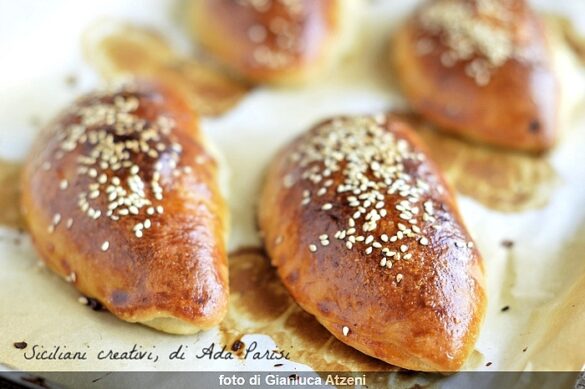 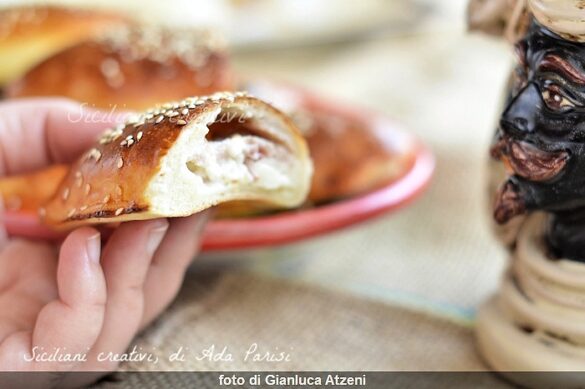 To make baked Sicilian breeches you must first prepare the diner dough.
For the dough with DRY BREWER'S YEAST, put in the the planetary sifted flour, the dry yeast, sugar, salt and water. Kneading at low speed and, when the dough has absorbed the water, add lard a little at a time. Knead until you get a dough will be smooth and homogeneous. Put the dough on the worktop (I use a silicone mat, indispensable in the kitchen) and knead for 5 minutes by hand. Put the dough in a bowl covered with food film and store in the refrigerator for 12-24 hours. Or, if you prefer a rise in the day, put the dough in the oven with light and iu'd until it doubles: In this case, I recommend doubling the yeast doses indicated in the recipe.

For THE DOUGH WITH SOURDOUGH OR FRESH BREWER'S YEAST. Both of these types of yeast must be dissolved in water at room temperature (measure it with the essential Thermometer cooking) before being added to the dough. Once the yeast has melted in water, you can add the liquid to the flour and proceed as I explained before. 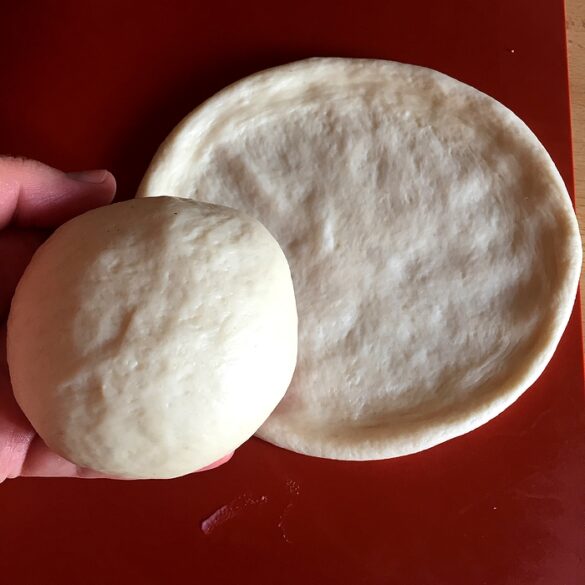 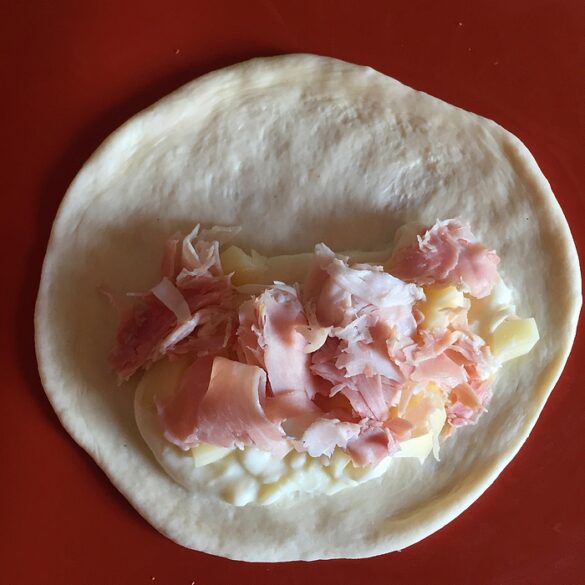 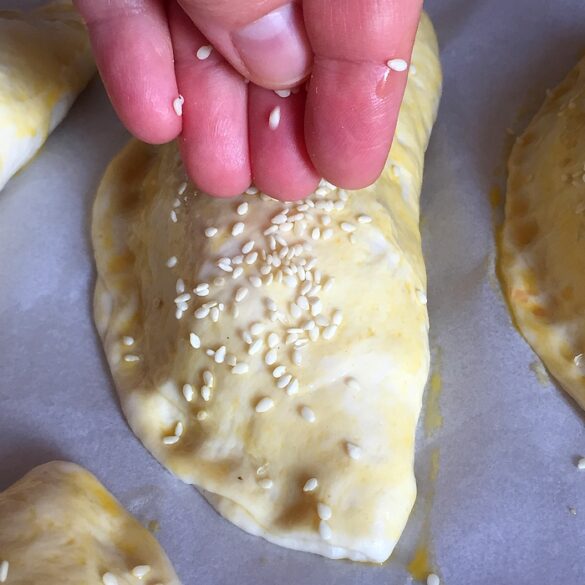 After resting in a refrigerator, put the dough in the oven with light light to rise until doubling. Once the dough is visibly well swollen, divide it into pieces weighing 70 grams each. Crush each dough ball with your fingertips until you get a thin enough disc, as you can see in the photos above and in the VIDEO TUTORIAL .

Put almost in the center of the disc (the edges should be left free because you have to weld) a spoonful of drinkers, hearty cheese and cooked ham. Fold the crescent disc, as you can see in the photos and in the VIDEO TUTORIAL and press the edges firmly, so that they are sealed perfectly. It is important that they are sealed, otherwise the filling will come out during cooking.

When you are ready, arrange the Sicilian breeches with ham and cheese on a baking sheet covered with parched paper, cover with clinging food film and leave to rise again until doubled. Preheat the oven to 180 degrees static. Mix the yolk with the milk and brush the Sicilian breeches with the mixture, then sprinkle with sesame seeds. Bake for 20 minutes or until the Sicilian trousers are baked. They're yummy both hot, with melted cheese, both cold and. Bon appétit!