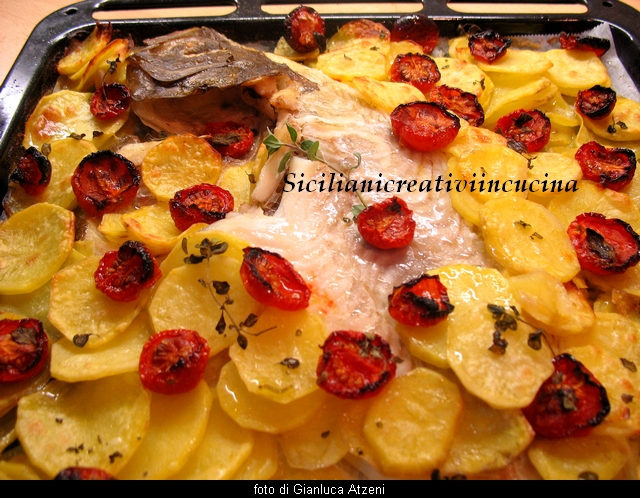 Baked turbot with potatoes and tomato confit: a classic recipe for a fish that for me is a novelty. I had never tried, Although I am a fan of fish. In Sicily it is not frequently found. But in Rome yes. And when I saw these rhombuses of Anzio in the fishmonger's shop I couldn't resist and I discovered that it has delicate meats, tasty, soft texture but soda. Few, very few plugs and if you know how to fillet you can put in the pot of white threads and clean with ease.

I made it in the most traditional way, with the potatoes and tomatoes from the oven, but I made the tomatoes confit and I added them only at the end of cooking to prevent them from throwing water. In this way I got a stronger flavor. Is’ was a resounding success and the ROAR, from now on, on my Board will.

Baking baked fish in a potato crust is an alternative to the classic SALT COOKING or CRAZY WATER.

If you want, you can also prepare this recipe with the turbot already filleted, slightly decreasing cooking times. On my You Tube Channel you will also find the video recipe baked turbot with potatoes and tomatoes confit, so you cant go wrong. In the video recipe I used Piennolo tomatoes instead of confit tomatoes, but you can also use fresh tomatoes as the Piccadilly or cherry tomatoes or Tomatoes.

lemon thyme and/or marjoram, to taste

Wash potatoes, Peel them and slice them with a mandolin thinner can, about 2-3 mm thick. A trick to get crispy potatoes is to put them to soak in a large bowl filled with cold water, you have to change frequently until you see clear. In this way the potatoes will lose starch and cooking will be crunchy. Then put the potatoes on absorbent paper and blot until dry well.

Preheat oven to 200 degrees ventilated: line a baking sheet with parchment paper, grease it with a little oil and season with a little salt. Lay turbot washed and dried with care. Season with salt, pepper if you like it and deploy around the rumbling and above (except on the head) potatoes. Salt and pepper the potatoes, oil grease, Sprinkle with plenty of thyme and/or Marjoram and bake for 15 minutes.

Deploy on turbot with potatoes tomatoes confit and continue cooking other 15 minutes or until the potatoes are golden and crisp. You can turn on the grill for a few minutes if you don't seem quite Golden. In case you decided to use fresh tomatoes, deliver the ROAR over the potatoes and bake all together, because fresh ones need a longer cooking time. Once baked, serve immediately.

MATCHING: Intense perfumes and the delicate taste of a Frascati superiore Doc combine well to this fish dish. We chose the wine of Wineries Earl Zandotti: a white from intense aromas of peach and pineapple, fresh and soft at the same time, with a slightly bitterish. Recommend drinking it not too cold, around 12° c, to exalt the aromas.

Timbale of anchovies, tomato and provolone

Thank you, Jacques, for your comment and welcome to my blog. Your proposal is interesting and has its roots in the middle of the great tradition of your country. Rarely, in Italy, We use Court bouillon, here, However, I well know. In particular, the tourbot in Italy is cooked in the oven with potatoes and tomatoes, especially in the South. Sometimes in broth, with mayonnaise (so oil of olive). Recently, I made a Dutch sauce, Although not part of our traditions, in this recipe that I invite you to watch…

I love the baked fish and prepared so, the ROAR, in particular, It's really tasty. Congratulations for the new look that you gave to your blog, If I have to give a definition, I ordered, clean and easy. Congratulations, the photos do justice to your beautiful dishes.

Jeanne thanks! How nice to have you here! And thank you for giving your opinion on the blog: was what I was trying to get, a clear and clean blog, readable. A hug, ADA

Dear Ada is beautiful the new makeup of the blog! Very professional! simple and straightforward! I like it!

Hello dear Birch! Thanks I found the time to go to watch my blog's redone’ (well Yes, I also use cosmetic surgery!). A big hug, I hope to see you soon. ADA

so I like most, the look of the blog I mean.
for the baked turbot… beautiful!
Sandra

Thanks Sandra! That satisfaction that my effort will be rewarded by conscious and positive comments! Is’ was a weekend of a pain but now I'm happy! And thanks for the ROAR…. I must say it is a fish from the outstanding consistency. One kiss, ADA

I really like the new look of the blog! very professional! and I love that you've finally discovered the goodness of this fish, is one of my favorites after the sea bass!
Kiss

Hello Annie but thank you for coming to see the new blog dress! I the ROAR I've never eaten there and I fell in love… A big kiss, ADA

Fish and I are good friends , I like it , but I hate scale and touch it, why I reduce to a minimum its consumption , so if I find a fishmonger who prepares the proveròMi really like the new look of the blog, I find it very elegant . Very nice your photos .

OPS , I left the comment and I haven't said hello , good evening and thank you for the recipe.

It was a nice comment, I never said that you hadn't finished. And then again a hug, ADA

Anna will be your blood milanese, It brings you closer to the ground and the mountain! I love the fish, I would eat every day! Thanks for everything, I'm so glad to have brought to term without disasters this transition to the new blog! I was terrified that exploded all! A hug, ADA

ADA dear…What a beautiful dish you prepared! The diamond is unique and I really enjoy with potato and tomato confit…congratulations! And they say the edel new look of the blog? I really like it! beautiful presentation and beautiful you! A big kiss

Hello dear Ale! Thank you that you have found time to come and see me! You're a sweetheart… you gave birth to a little boy and I'm a new layout for the blog! I would say it is an unequal struggle! I embrace you strong! ADA