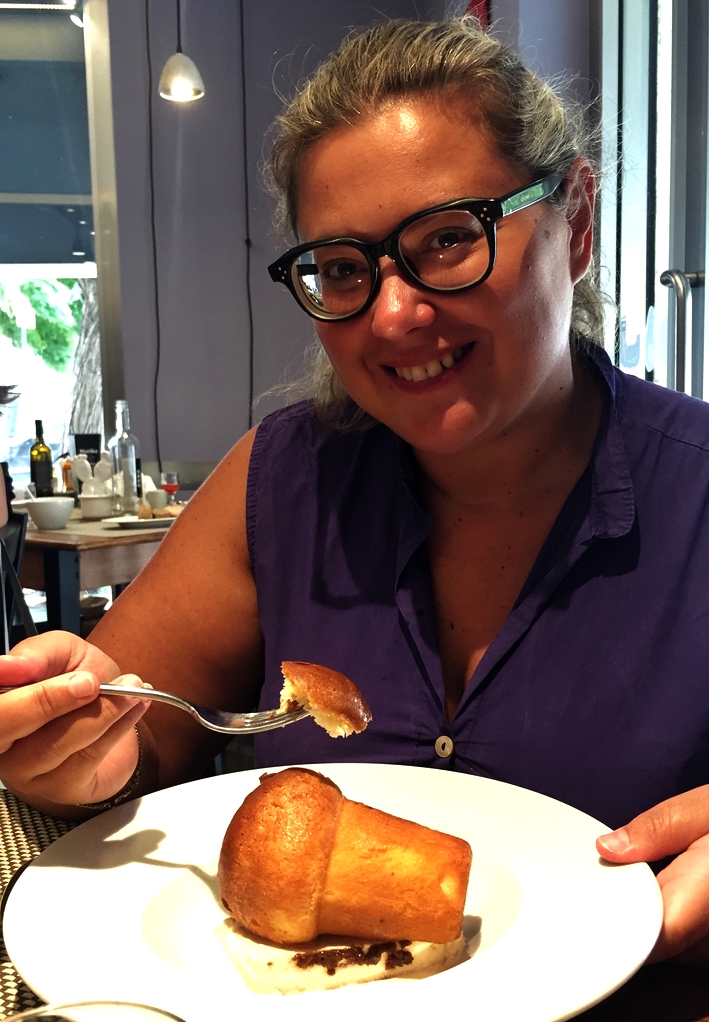 Where to go to eat in Messina? You are many to wonder tips, everyday, on where to eat around Italy and I, who are always around, I can often give everyone a suggestion. On my town, Messina, now I have an address to recommend more: Casa e Putia. A full restaurant in the center, next to the Municipal Palace, between the theater Vittorio Emanuele and the Duomo, in a shaded lane and far, you need to know otherwise go unnoticed.

Inside, Casa e Putia, open in three years (before the owners have run a small restaurant in the province and the great restaurant of a hotel in Villafranca Tirrena), It is cozy, with beautiful wooden furniture style a bit’ back, a discrete lighting, colored walls on which stand out words in Sicilian that, for a Sicilian, have a strong emotional tone: “know, warmth, big, odor”, know, heat, Sea, breath. Adriana, one of the owners, He says once that the philosophy of the restaurant is to the reception, of familiarity.

House and Putia is a restaurant of the association's circuit “Slow Food”, and you can tell immediately from the many Sicilian ingredients that are part of Slow Food, inserted in the menu. In addition, it is evident attention to seasonality and the territorial and locally sourced. An address to add to others already known, such as gourmet cuisine from Pasquale Caliri The marina del Nettuno, tradition dressed stylishly of "I Ruggeri" and the excellent pizza Lievito. 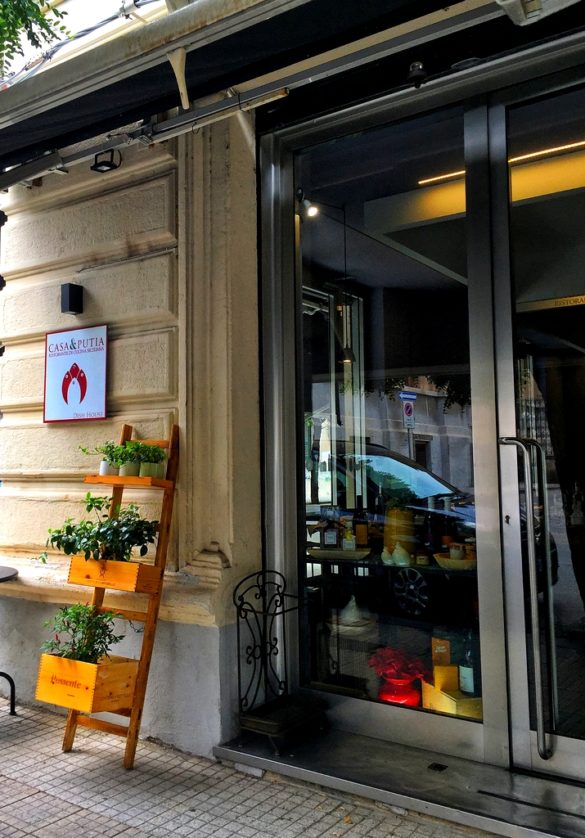 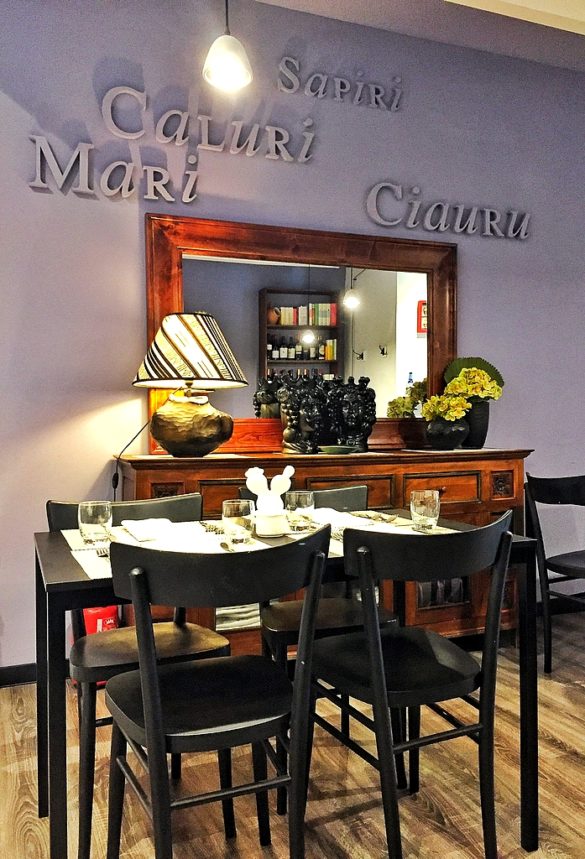 The PÜTIA dedicated to the good of Sicily

And if the 'home’ is the restaurant, where you are welcomed with warmth and competence, la 'putia'’ (the shop) is a small corner dedicated to the sale of selected Sicilian products, from jams to honey, extra virgin olive oil to the Sicilian ancient grains flours obviously passing for craft beer and wine. The kitchen chef Enzo Saja is traditional mold and mixes recipes inspired in every corner of Sicily, with a special focus on the specific Messina. Is’ the obvious passion of the owners for good food and good ingredients: They like to explain the products, make them taste, entice the customer to learn more. Behind the restaurant Casa Putia and there is a great job in terms of communication to the public and not just cooking, and this needs Sicily. 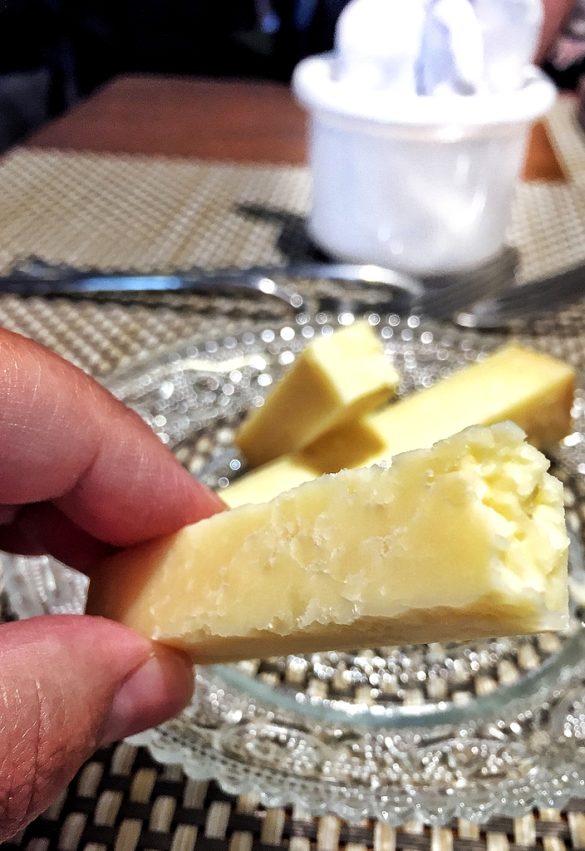 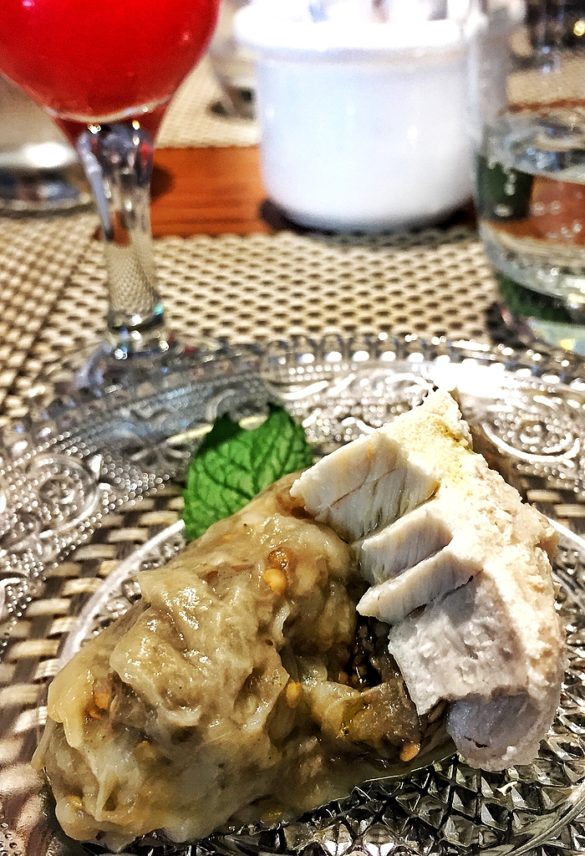 The Slow Food House and could Messina

Noting our interest for niche products, they offered “Etnagrana ”, Cow's milk cheese produced in the country of Moio Alcantara, Vincenzo Currenti. A product with an intense flavor of hay and short maturation and media. Then, on the table it's the chef's welcome: chopped roasted eggplant, served with fish and albacore with an aperitif of sparkling wine and blood orange juice. The bread, such as bread sticks and waffles, It is produced at home, ancient grains flour Sicilians (variety and Russello Tumminia, in our case).

Among the many Sicilian products (especially by Slow food) that stand out in the restaurant's menu and Putia House Messina, There are sea salt of Trapani, the Etna Oil, the green lemon of Syracuse, the cheese “Piacentinu from Enna”, the siccagno tomato from Salina, black pig of Nebrodi, the cheese “"vastedda"” of Belice valley, the capers of Salina, red shrimp from Mazara, the olive oil of "minuta" (a Sicilian native variety), the bean “"cosaruciaru" from Scicli”, the almonds of Avola, the Leonforte peaches, clams from Lake of Ganzirri. The wine list got carefully chosen references and is exclusively Sicilian, with mainly organic and natural wines, with a fair value. 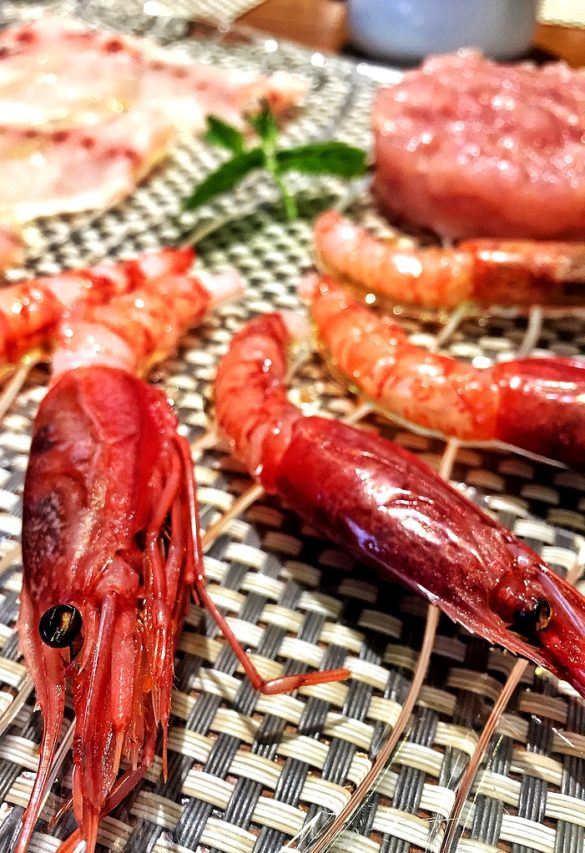 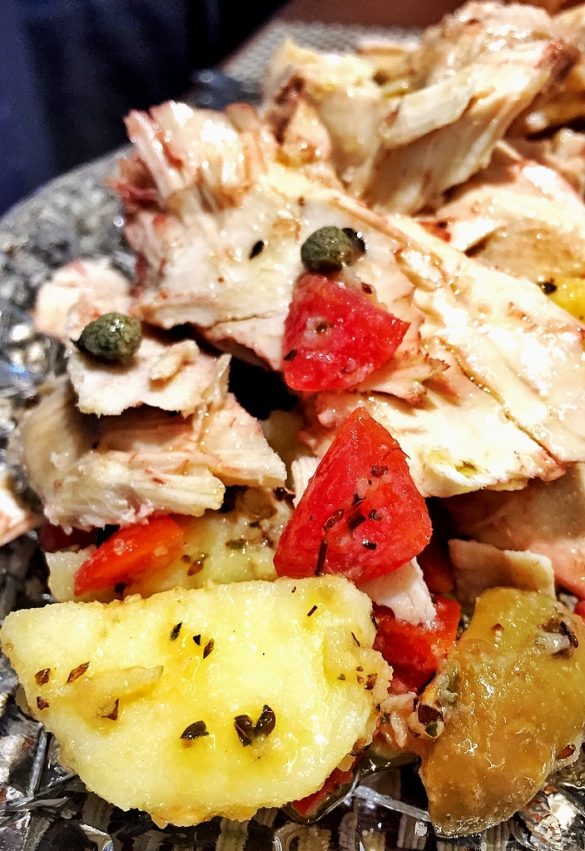 Two tasting menus, the first at 40 euro for 4 courses (in addition to the chef's welcome) and the second at 28 euro for two courses, with a cocktail offered by the chef. from paper, we tried the selection of raw fish: red shrimp from Mazara del Vallo, swordfish carpaccio, an amazing amberjack tartare, served with olive oil of the variety “minutes” (Slow food). Buonissima the Pantelleria salad revisited, served in a more than ample portion, based albacore tuna in oil (homemade), potatoes, tomatoes, Capers, olives and oregano. The summer menu prices go from 20 € of raw fish selections with oils and salts, up to 12 € of eggplant meatballs with sweet and sour peppers and green beans ammuddicati. The price of pasta is 14-15 euro, while the price of the second plates is between 14 and 18 €. 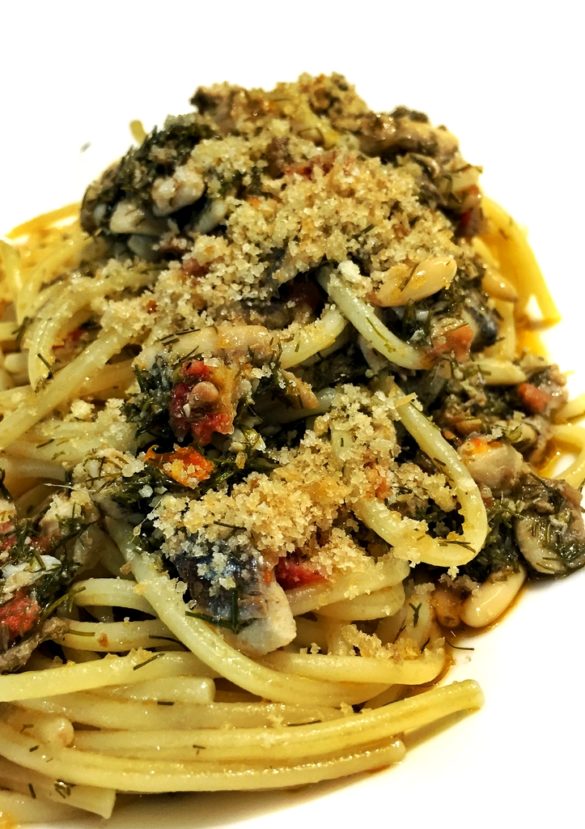 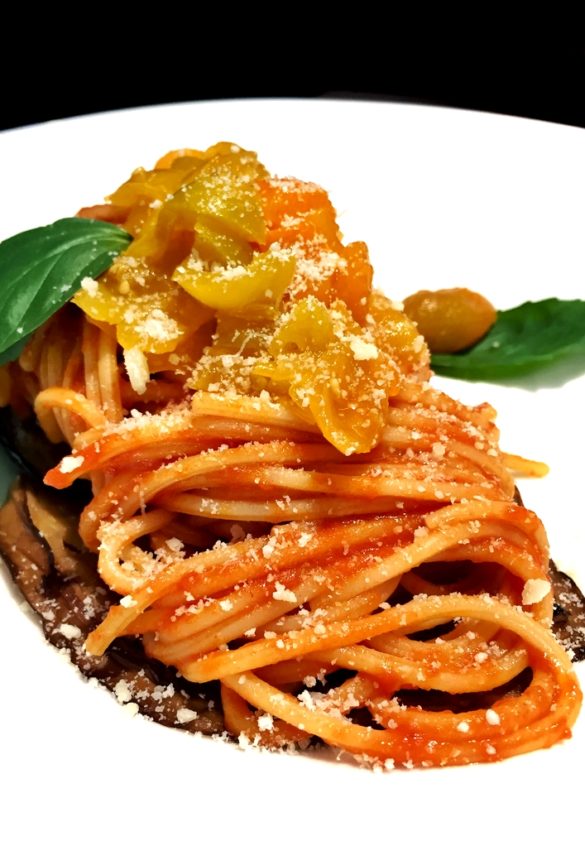 Among the first courses, we tried a classic Palermo: pasta with sardines. prepared, unusually, with spaghetti and not with bucatini, which are the traditional format for excellence. The pasta was not perfectly al dente, but it was so well-seasoned, with a rich sauce of fresh sardines, Wild fennel, pine nuts, raisins and fried bread ordinance, to forgive an error in the degree of cooking.

Then, we tried a simple pasta with tomato sauce, which it proved to be one spaghettone with a sauce of red tomatoes and orange Pachino, Etnagrana grated cheese and fried eggplant. Practically a pasta alla Norma, tasty and high acidity due to tomatoes. In its simplicity, we liked. 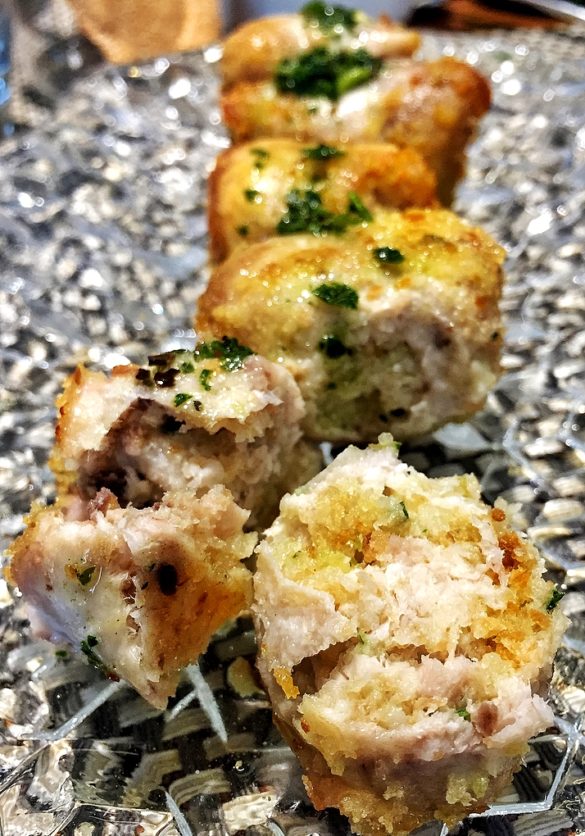 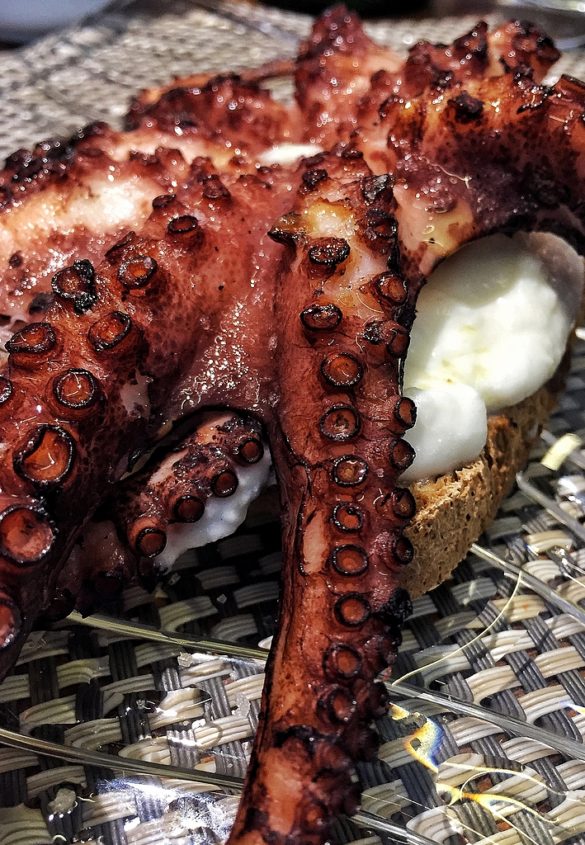 We had lunch from home and Putia on a Sunday in late summer (It is one of the few restaurants open on Sundays in the center of Messina). it menu (6-7 starters, 5-6 early and as many seconds) It is mostly fish. For those who do not like fish, There are several dishes with vegetables and cheese. And there are always some courses meat: arancino the black pig meat sauce of Nebrodi, tartare of beef cattle (scottona: the female cattle between 18 and 24 months), sliced beef.

Among the second, we tasted excellent cutlets grilled swordfish, one of the symbols of Messina dishes. For who, like me, He is accustomed to eating “braciolette” homemade, hard to find the restaurant of the versions that are satisfactory to the end. These chops were well made: the cut of swordfish was correct, the so-called 'surra’ (the belly of the fish), which it is more fat and soft, and the savory filling (I dared to put a bit more pecorino cheese).

Also good combination of grilled octopus and burrata, served on a toasted bread flour varieties Tumminia: a plate a little’ Overall food, due to the toasted bread with a very high and thick slice, to which add freshness with a little’ grated rind of green lemon of Syracuse IGP. 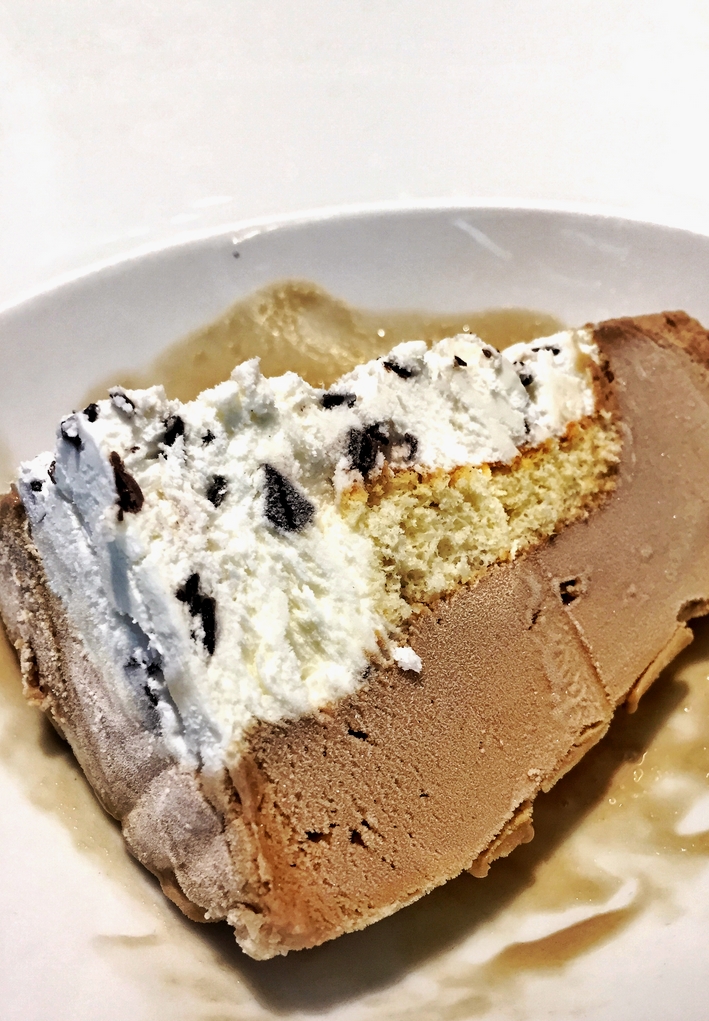 Dessert (5-6 euro) all homemade and “in the traditional way”. Desserts Home and Putia in Messina evoke some of the most typical recipes of Sicily, but not only: Blancmange, Lemon Frost, schiumone Messina (It becomes almost impossible to find, It is an ice cream in one or two flavors with whipped cream and sponge cake in the form of skullcap, which is cut into quarters), almond ice cream and rum baba with ice cream. Impossible, for Messina like me, about enjoying schiumone: ice cream quite good coffee, slightly too sweet, with cream enriched with chocolate chips and a soft sponge cake. A great sweet memory.

Also good “Baba”, served with ice cream and rum: a Campania sweet in Sicily, especially in the version Savarin with cream and fresh fruit, It is widespread. Well executed and with a wet not too alcoholic. Upon account, with a good relationship between quality and price, There has been presented with a jam mandarins. A small gesture that, together with the kindness and expertise of the owners and the happy chef's hand, He tells the bounty and beauty of my Sicily. Not to be missed if you pass by Messina.

Reviews: The Lumie (Marsala), the challenge...

Itineraries: the charm of Palermo between...