Rice with chicory and Amarone with sheep cheese and pine nuts 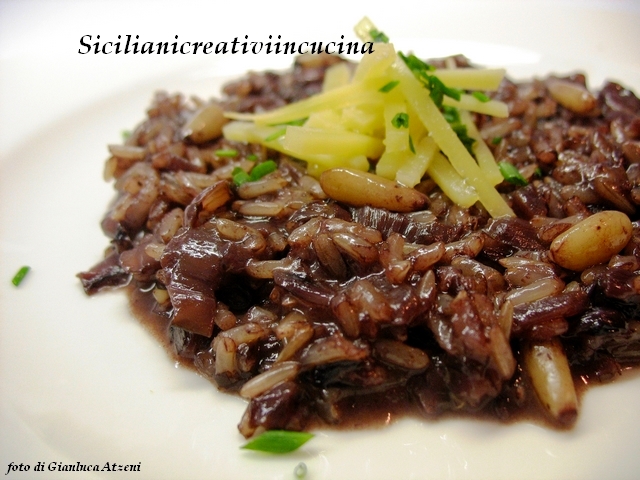 It looks like a normal risotto, but it is not. It's not in the sense that I wanted to use for this risotto with radicchio and Amarone with sheep cheese and pine nuts, a basmati rice brown Sardinian (produced by Molas) I purchased while vacationing on the island and that I wanted to test just like risotto. This rice must be kept in water for at least eight hours, better if all night, It has a long cooking: 30 minutes if boiled, 45 for a risotto. Is, Despite the long cooking, It remains crispy: its consistency is fantastic and well takes the long cooking sauce. As you can see, I don't call him rice with radicchio risotto but, but it was an experiment in my opinion well managed. The combination of radicchio and Amarone, enhanced by chives, from pine nuts and particular flavour of sbrinz, is made more interesting by texture and particular aroma of this rice. If you want, Obviously, You can prepare this classically risotto with Carnaroli or Arborio rice, following the same recipe. Is’ a risotto which I suggest course for Christmas dinner or new year's Eve for its elegant flavors but determined and refined to the note given by Amarone della Valpolicella, one of the three most famous Italian wines in the world.

If you use whole wheat basmati rice remember to put it in water the day before. Finely chop the onion and radicchio. Put onion in a saucepan with oil and allow it to dry over low heat, adding a little stock if needed.

When the onion becomes transparent, Add the pine nuts and toast them, then add the radicchio and FRY well. Finally, Add the rice and toast for a few minutes, stirring frequently. Turn up the heat and deglaze with Amarone, evaporate the alcoholic part and start adding the vegetable stock floor plan, until the risotto Cook (20 minutes for a classic risotto with Arborio or Carnaroli, 45 minutes if you use whole wheat basmati rice).

Season with salt and pepper and stir in the butter and with sbrinz cheese. Serve the risotto guarnendolo with sbrinz and sticks with the finely chopped chives.

THE PAIRING: We are facing a plate marked by bitter radicchio and salty and greasy sbrinz, perfumed wine Amarone della Valpolicella. A combination of flavors that, However, We don't choose the same Amarone for pairing, but a sparkling wine from the residual sugar content medium to high, able to create a contrast of flavors and, then, a balance. That's why we choose a Pinot Noir spumante extra dry, produced by Winery Vanzini, San Damiano del Colle, in the province of Pavia: characterized by scents of PEAR, Apple and banana, with a soft taste and balanced, good structure.

Polenta flan with egg of...

Hi Ada,
Thanks a lot for your quick response! I'll try this weekend ´.
Wish me luck!

Good luck! I'm sure you will like it! ADA

I ate the risotto on my last journey to Italy and I loved it! I would like to prepare it here in Brazil, but I didn't find any bottle of Amarone for under $300,00. You know tell me if it is possible to replace with another wine and keep a similar flavor? Obrigada

Hallo Ludmila, You can substitute Amarone with an aged red wine (at least 5-6 years), full-bodied, tannic acid, with a volume of 14 to 14.5%. Among Italians Ghemme, Aglianico del Vulture, Sagrantino di Montefalco… Not Lambrusco, It isn't okay for this dish. Let me know, ADA