Reviews: Your pizza Illuminati. In Rome the high quality lives in pizzeria 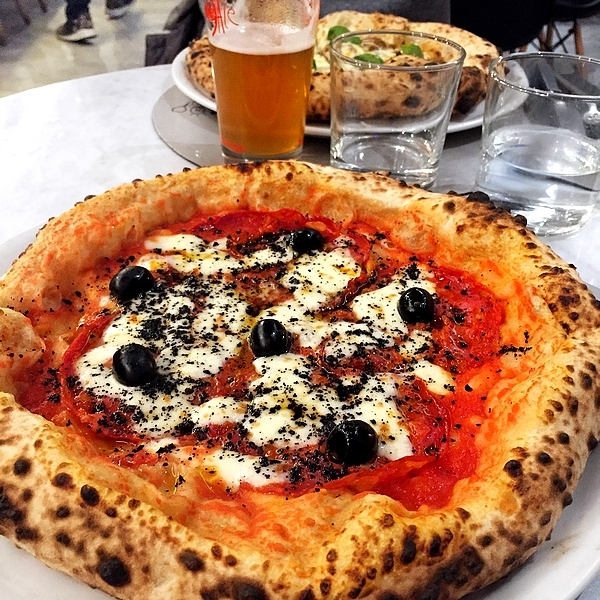 Experimental, Creative, monitoring the market researcher, proud and sly. Pier Daniele Seu is one of those pizza-makers who leave their mark. Romano, of distant Sardinian origins, opens “Your pizza Illuminati” Rome in March 2018, After the experience at the gasometer and the Central Market in Rome, where he still signed the pizzas. The pizzeria is located in Trastevere district, just steps from Porta Portese, and not far from the very interesting 0steria Fernanda of David of the Duke.

Seu pizza Illuminati has five large windows that give on Bargoni Street. Ninety covered about divided among the 10 at the counter, where you can eat informally in front of the kitchen, and the 80 covered in the room. The furnishings are neutral tones and play between the black, white and gray, illuminated from the golden finishes of the counter, which include the oven dome, built by the Tuscan “Valoriani”, that provides time to Pier Daniele Seu hardware for its pizzas. The tables are small and close and the environment unfortunately quite noisy, despite several interventions for the installation of sound-absorbing panels. 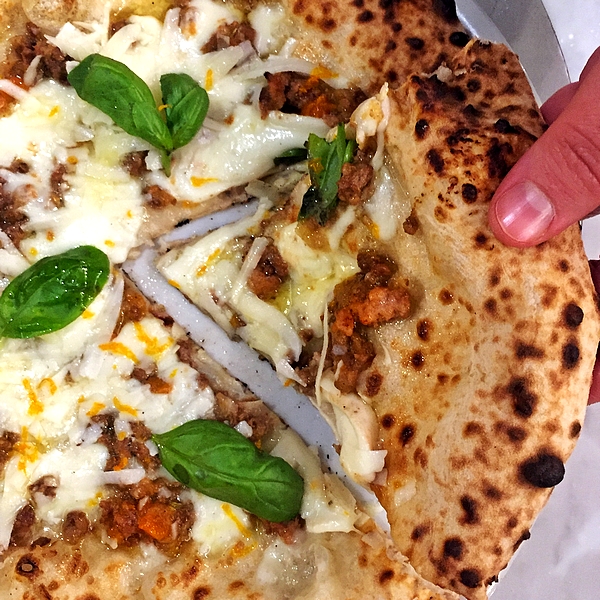 “In pizza we trust’: the motto of Seu pizza Illuminati

Pier Daniele Seu is one of the most established in the Roman pizza scene. And who pays him a visit should always expect the highest. His was a path that led him to constantly improve thanks to the study and the relationship with the great masters of Italian pizza. For those who taste the pizzas Seu his motto, “in pizza we trust”, It is widely respected, considering the wide variety of proposals that are constantly changing, creativity in topping and never dull attention to the needs of vegans and vegetarians. For tasting, in an unusual way and worthy of note, It is proposed a combination of bread and oil. The bread is to Gabriele Bonci (as multisemi), that is served hot, combined with a choice of extra virgin olive oils from the Lazio Region. 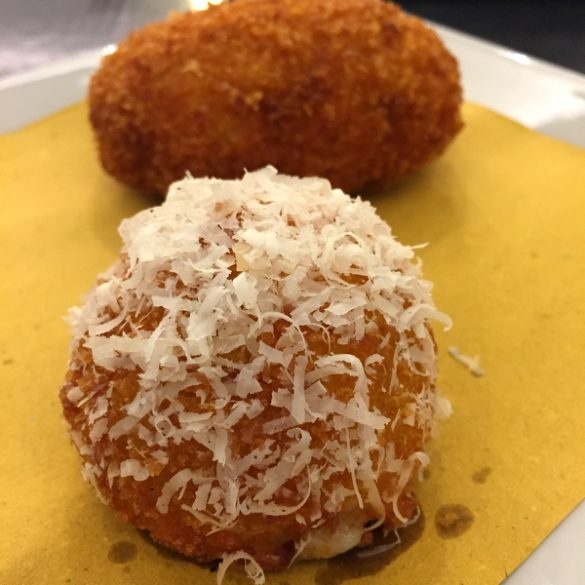 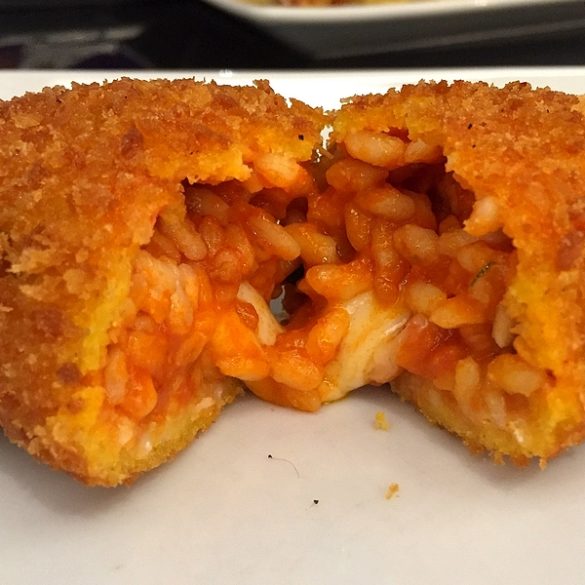 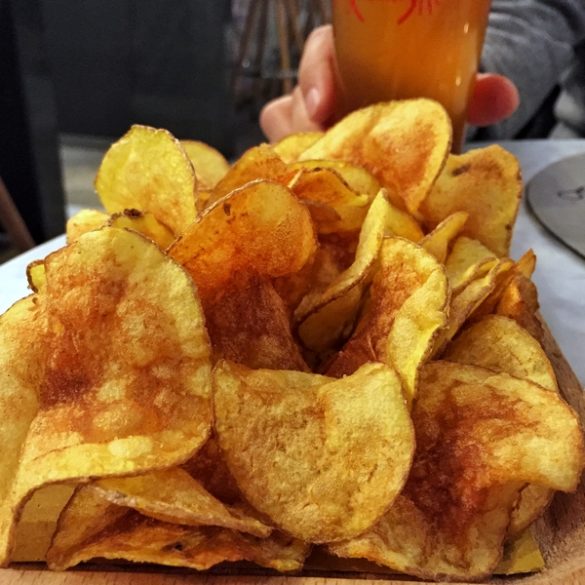 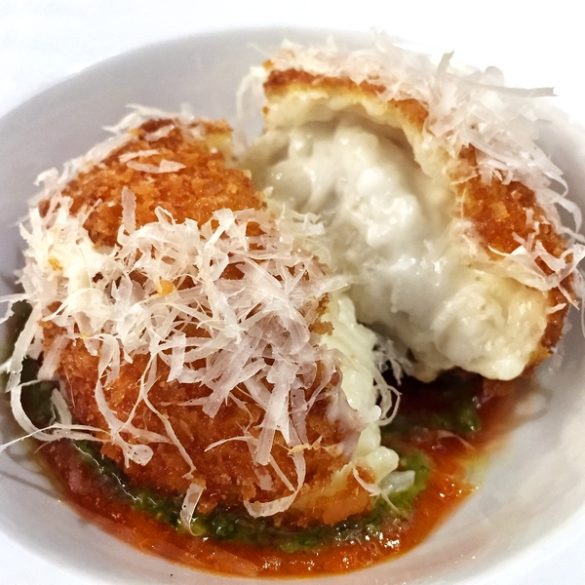 Space also to traditional Roman fried, with different proposals supplì: classic Roman (which it is always in paper); cheese and pepper; scampi sauce; puttanesca (all in 2,5 and 3,5 euros). We especially liked the rice rolls with butter and Parmesan, accompanied by a fresh tomato coulis and pesto at the base of the dish. Rice al dente and well creamed, creamy heart.

All fried foods are breaded in “Panko” (typical white breadcrumbs fries Japanese cuisine), and they are crisp and not greasy. The menu also stuffed courgette flowers (3,5 euros), potato croquettes and Neapolitan-style pasta frittata (3 euro), the fillet of cod and parmigianina (4 euro). We tried the potato chips (crispy and not oily), served in baked bread paper. One flaw, as always in these cases, potatoes in foil on the bottom of losing crispness. Among the appetizers even “frymezzini”, an original idea Seu pizza Illuminati: pieces of sandwich, seasoned in various ways according to the Roman tradition, breaded and fried. 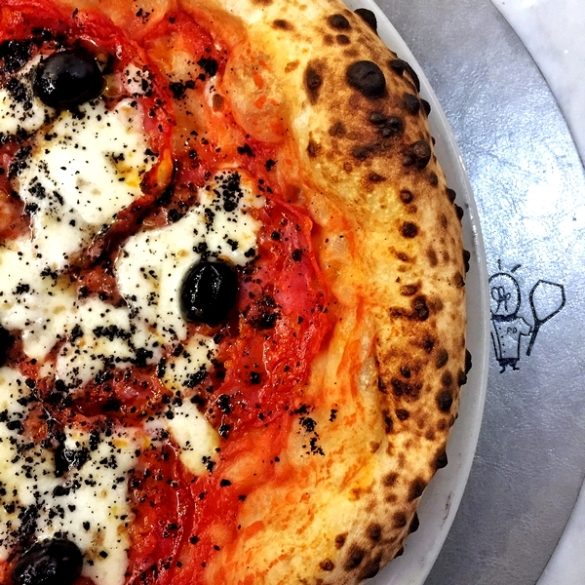 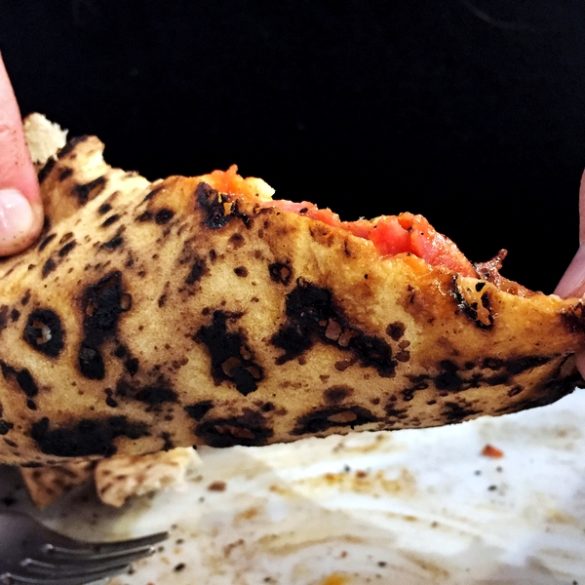 The mixture of all of Pier Daniele Seu pizzas is composed of zero flour type and type one, water, Salt, Dried brewer's yeast and olive oil. 70% hydration, long rising (24 hours for the ripening of the dough and 24 hours for ripening and leavening the panets). Short cooking in a wood oven at 430 degrees celsius. The result is a pizza that the ledge, swollen, soft but tense and exceptionally blister, It refers to the pizza boat (some have even spoken of the Roman sleeve) and the disc crosses the tradition of Italian pizza. Base, In fact, It is thicker, not saggy, consistent to the bite.

The short cooking at high temperature must be carefully controlled, however,, also through a meticulous cleaning of the oven, to avoid that the soot confers to the disc a bitter aftertaste. All pizzas Seu pizza Illuminati are seasoned with a pinch of pepper and a little’ extra virgin olive oil, among the products used selected tomato Italian company Vera, Ponticorvo of mozzarella cheese, the Cogoni vegetable market in Testaccio. The attention to craft production is also demonstrated by the choice of olive oils all Lazio, Santoro of salami (Puglia), the tomato yellow Vesuvius Piennolo,
Provolone Recco. 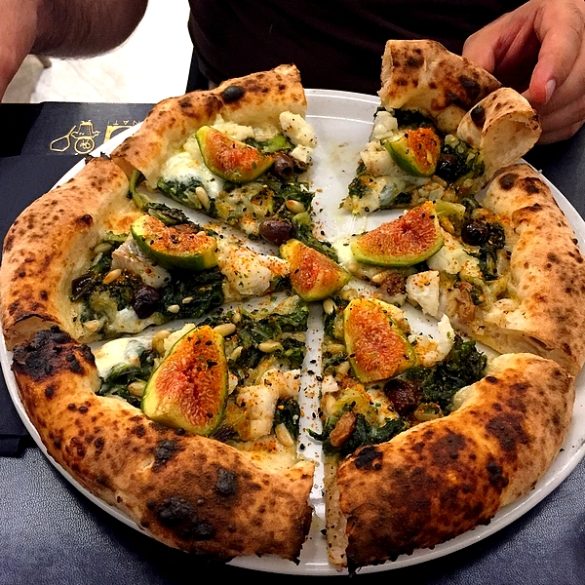 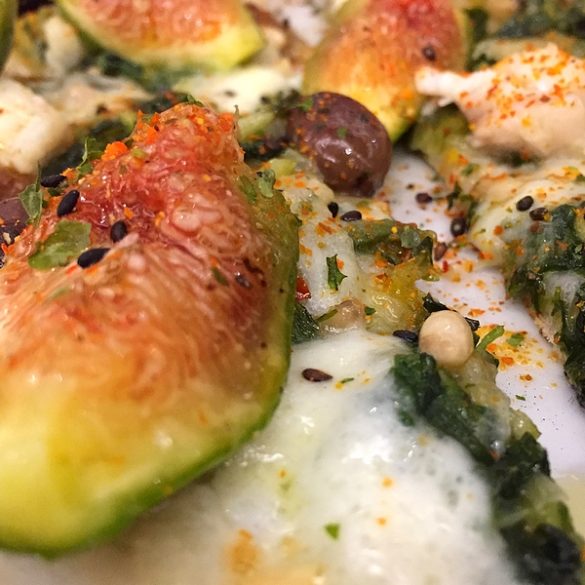 The cost of pizzas ranges from 7 euros of marinara to 14 euros of Deja Vu pizza (14 euros), a complicated balance, very successful, including mozzarella, ripassata escarole with pine nuts, olives, anchovies, raisins, codfish, figs and a mixture of five Japanese spices. In our opinion the value for money of the Illuminati Seu pizza pizza is great. 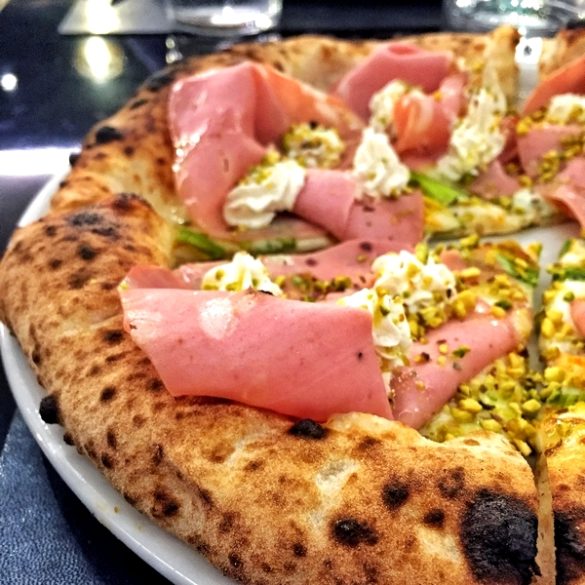 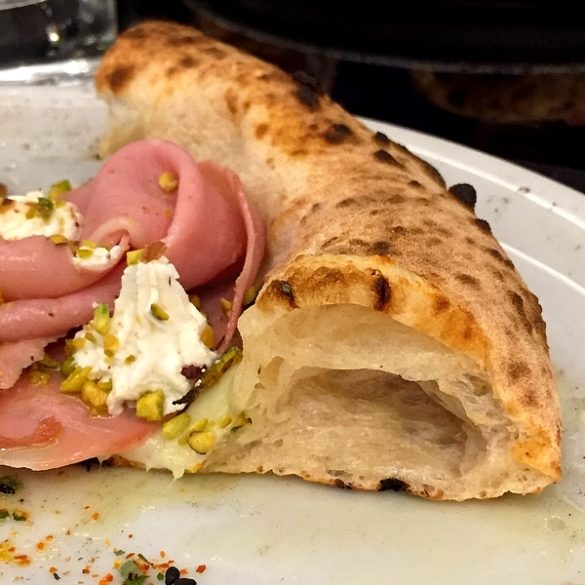 We also like to emphasize the creative engagement of Pier Daniele Seu front of vegetarian and vegan pizzas, with combinations and never predictable creations, like the pizza series with 'absolute’ of various vegetables, from tomatoes to zucchini passing through the cruciferous, or the vegetable treated in different declinations. Also interesting is the vegetarian pizza “Oliver Glowig” with mozzarella, Blue Buffalo, radicchio, raspberries and toasted hazelnuts.

Minimal sweet card with three gourmet proposals for 6 euros and a sweet pizza (12 euros), recommended for two or more persons. We tried the “Choc Banana mou”: chocolate mousse, fudge, toffee sauce, Cream Banana, Marquise cocoa, almond dark chocolate, dark chocolate sorbet and chilli. A nice change from the classic chocolate and banana pairing, with an interesting play of textures for an elegant dessert, those you would not expect in a pizzeria. For those who want to continue the evening chatting and drinking a meditation wine, there's a proposal for small pastry at 4 euros, in conjunction with sweet-level wines like Passito di Pantelleria “Bukkuram” Marco De Bartoli. 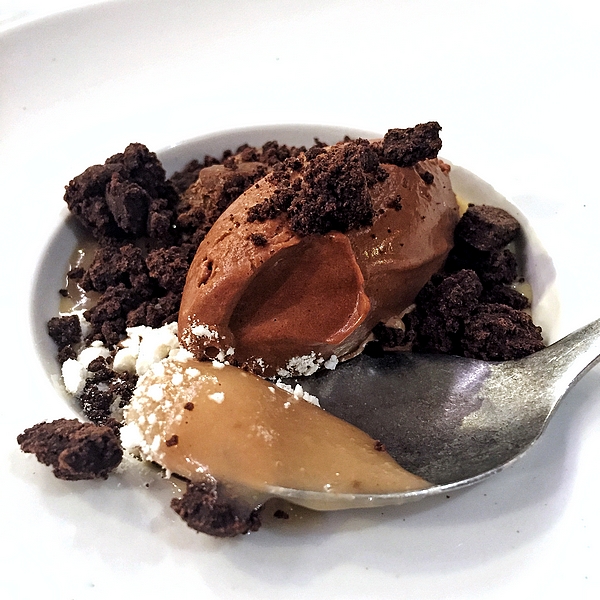 The wine list offers a nice selection of Champagne and sparkling wines, with an average mark-ups and high enough notes labels, alongside with other most sought. It's nice to see some pink paper, Perfect in combination with pizza. Between drinks, Also a selection of craft beers on tap (between 5 and 6 euros) still not sufficiently wide for an upscale pizzeria.

Also good attention to meal, with choice of dessert wines, schnapps and spirits, amari, spirit, rum e whisky. Prices per glass range from 4 to 10 euros for a 16-year-old Scotch whisky. The dining room service is conducted by trained and always smiling companion of pizza, Valeria Zuppardi and staff, agile and passionate, shines for rapidity in service. Seu pizza Illuminati is among our favorite pizzeria in Rome.