Reviews: the legacy of “Pai” in the kitchen of Nicholas Chan 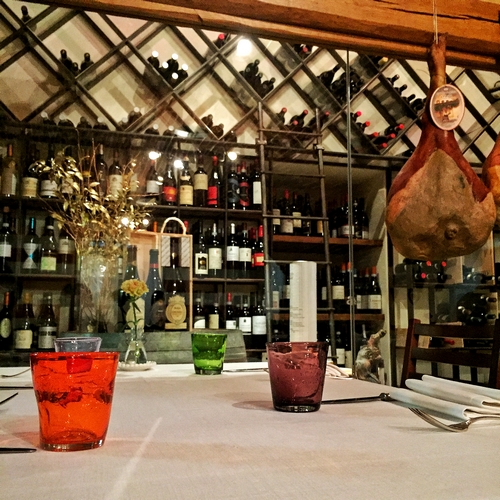 Walking through the streets from the medieval town of Acqui Terme, in the historical center, a few steps from the Duomo and the ' Hot ', the source of thermal water flowing by smoking at nearly 75 degrees (braked the momentum in touch because you would burn), You can be faced with a 18th century, House, Yellow, with two small doors that open onto a narrow street paved surround: do not continue without looking at why, especially if you're close at lunchtime or dinnertime, you have found a restaurant where really worth stopping. Is’ the New Pai, mysterious name apparently, but he actually just wants to determine distance and proximity, at the same time, with the culinary tradition carried on by the historic family of cooks of Pai, since 1933. In the kitchen, in this club open from 2012, There is the young Nicholas Chan, Preeti Pai's nephew, they decided to marry the purest Piedmontese culinary tradition, combining it with a high quality environment: two lounges (, separate and unconnected, the first floor, with a lovely vaulted cellar and bricks at sight, the second to the first floor, with a beautiful wooden ceiling and tall doors painted of the fourteenth century. Alongside Niccolò there is a sommelier from the far East, Keiko Yamada, who runs a very well stocked wine list, with so many references of Piedmont (even the rare Timorasso) and several proposals by France. 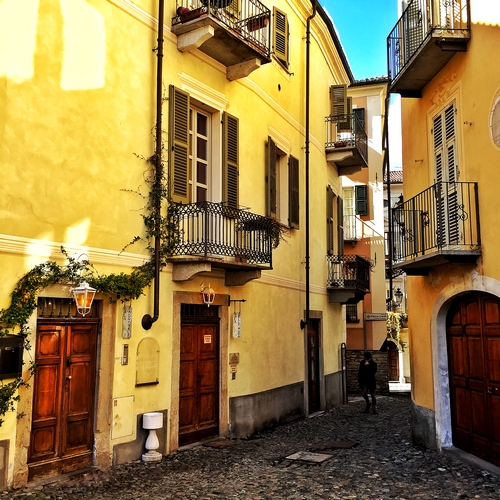 We speak now of the value, definitely more than correct: appetizers and pasta dishes all democratically to 10 euro, second dishes from 14 to 15 euros, a great cheese cart (8-14 euro per portion, Depending on the amount) and a proposal of the day more than fitting that, costs 35 euro, offers raw meat monferrina and veal with tuna sauce as an appetizer, the unmissable agnolotti Malhotra and a seafood platter, that testifies to the strong relationship with neighbouring Liguria, Stockfish to Acqui Terme. To close: tasting the cheese or dessert. The portions are fair, the simple yet elegant presentation, Although what is worth more are the flavors: balanced, balanced, in the tradition of Piedmont, but just relieved. 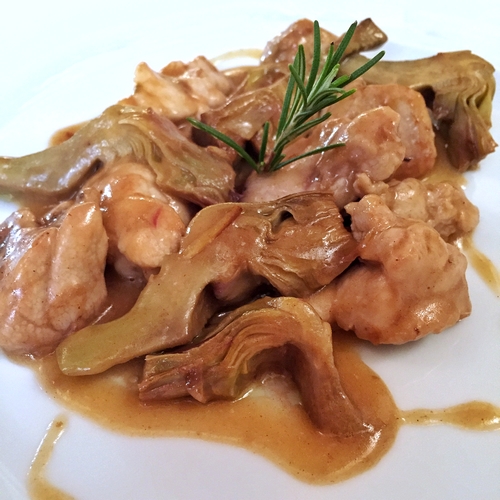 Is’ recently that I found out I had a passion for the Sweetbreads (glands that are obtained from pigs, sheep and cattle). And the new Pai I tasted the best good ever: made with artichokes and a shot of Marsala that I, from good siciliana, I recognized immediately. Tender Sweetbreads, Crispy artichokes, for anything salty sauce. All accompanied with bread and focaccia, made every day by the Brigade de cuisine. Only the breadsticks, served by beginning meal, are purchased from an outside supplier. I also liked the selection of bread sticks, because they were really well made. In paper, also a rabbit tuna, raw meat to the monferrina and the veal with tuna sauce: In short, some of the great classics of Piedmont. 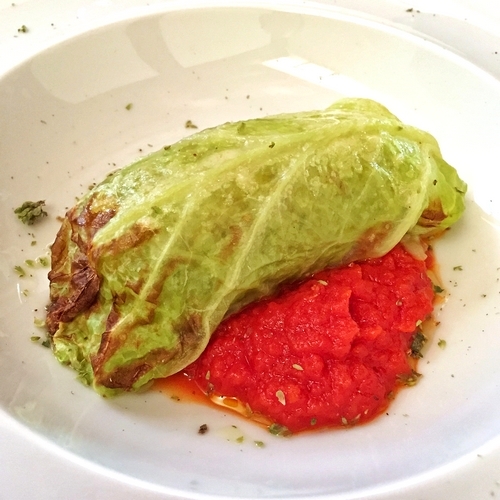 Seen that, in my weekend in Acqui Terme (at the beginning of March), temperatures were extremely cold, at the restaurant Il Nuovo Pai I could appreciate winter dishes such as “Capunet”, a poor recipe originally prepared with boiled meat leftovers, that was chopped, seasoned and transformed into a stuffing for the cabbage rolls, they are accompanied by a simple tomato sauce, that is the traditional “preserves” Granny. As for the fish, among the starters, the restaurant “New Pai” proposes the cod in batter with a cream of potato and shallot. 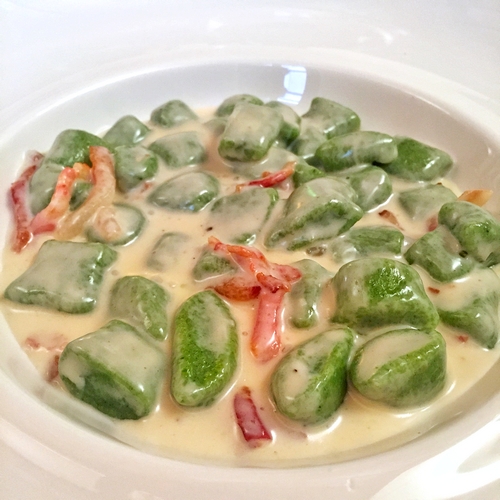 As a first course, I succumbed to the lure of green potato dumplings, homemade, and topped with a cheese fondue Bra hard and crunchy cheek lard (holding of Osvaldo): a butter dish but great temperament. Soft but firm gnocchi, crispy and well degreased the pillow, with its smoky flavor, but especially delicious cheese fondue Bra for me, cheese lover, is an irresistible temptation. In paper as well as other ' must eat’ Piedmont cuisine: ravioli alla Monferrina, Tagliatelle with duck sauce, ravioli with Alpine fondue. And a small foray into Aosta Valley with the crepes alla valdostana. 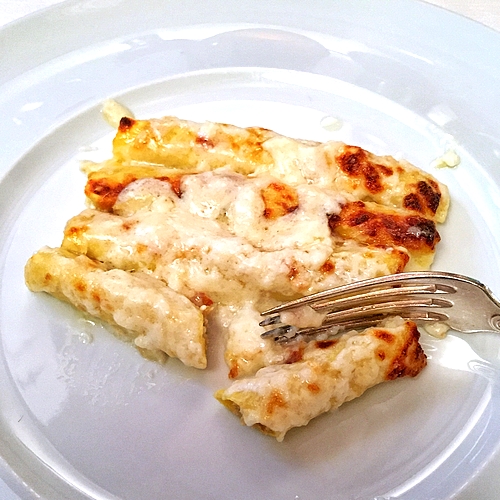 Details the “cannelloni with Pai”, one of the glories of the local: much smaller than usual (reminded me of the cannelloni Cameri, Novara), with a very light bechamel sauce and a filling of veal. A dainty dish, much lighter than regular cannelloni. With the first courses, We have combined a wine cellar Albarossa Podere Luciano 2011 (19 euros). 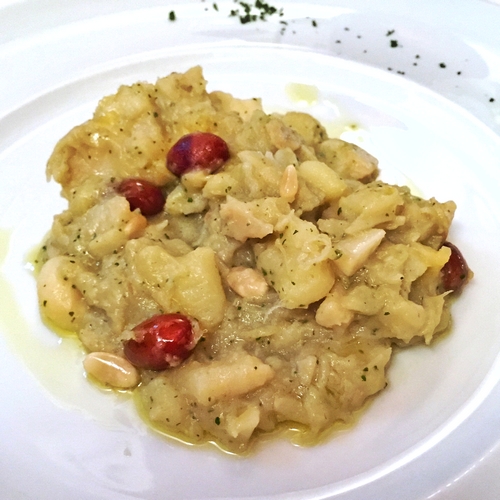 Among the main courses, We chose the stockfish to Acqui Terme, a typical dish of the place that recalls once again the strong ties with Liguria, White cooked with potatoes, pine nuts, parsley and olives. A delicate but flavorful together and, especially, a good balance in terms of sale. In paper, other classic Piedmontese proposals with barnyard animals, how the Guinea fowl casserole and roast leg of rabbit stuffed with artichokes, and small raids in neighbouring Lombardy with the Wiener schnitzel (prepared expressed) and the ossobuco in gremolata with mashed potatoes. 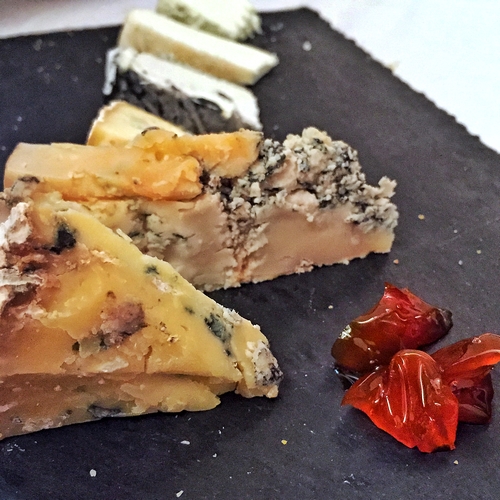 Obviously, I would never have been able to avoid the Cheese tray. I avoided with immense effort of will for the spoon gorgonzola Dop, My weakness, to dedicate myself to the subtle difference between fresh robiola di Roccaverano Dop and refined, robiola vegetable ash, a blue goat Monviso, a seasoned goat and a yummy blue Stilton. The cheeses were served with a delicious red pepper Chutney. 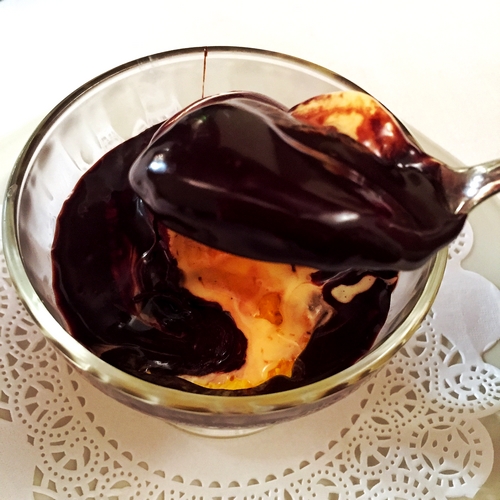 We come to dessert: I chose to try the dessert restaurant symbol, the “Special P. P.”, a recipe invented by the grandfather of Niccolò, Preeti Pai: cold zabaglione cream served with chocolate sauce and vanilla ice cream. Delicious. In paper, even panna cotta with pears in Muscat and different flavors of homemade ice cream. 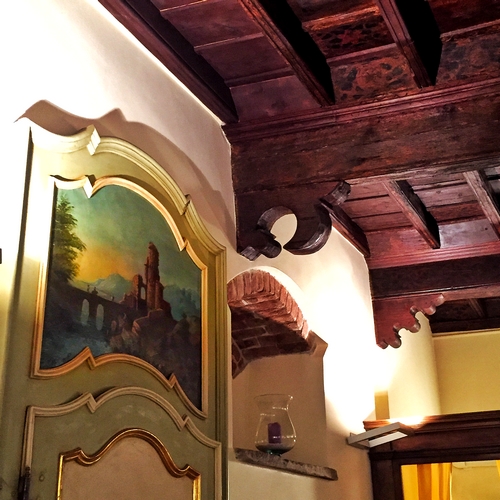 A special mention for the service in the restaurant New Pai: highly professional, very attentive, without ever being subservient attitude. Both the sommelier, both the maitre di sala were good, Prodigals of explanations and courteous. Needless to say, at this point, the restaurant is highly recommended New Parisio.

Reviews: The Caffi, elegance and tradition...