Four types of dough, refined toppings, high prices but adequate for a pizza that, with a term abused, It is mandatory to define gourmet. After Cagliari, even Sassari has today its pizzeria quality, confirming that finally has taken the right path in Sardinia. Sandro Cubeddu, 33-year-old Bones, the small town of Logudoro, After six years of experience in Torralba (The White Tower), He decided to launch his challenge for a modern pizza. Did moving to Sassari and ushering in, in November 2016, Re-Mi, that name brings his passion for music and the desire to understand the kitchen brigade as a set of instruments playing harmonically the same Symphony. Cubeddu is supporter of an expanded concept of entertainment, that doesn't shut the pizza within the definition of “Quick food”, rustic, typical Saturday dinners among friends. For Cubeddu, The pizzeria can and should become a place to offer high quality products, carefully selected and presented in modern, in a relaxed atmosphere away from the noise of most Italian pizzerias. Careful scholar and Explorer of the different techniques of kneading and leavening, including the complex world of large leavened products, makes a Neapolitan-style pizza, not alla romana, but modern Italian, with the use of mixtures with indirect method, wholemeal flour, sourdough leavening and double. Over these bodies, Cubeddu likes to propose tasty serving suggestions worthy of creative cuisine, also with an eye to the Orient. A challenge, his, you play even on the level of prices charged, definitely much higher than average (with the exception of traditional pizzas), especially for a city like Sassari. 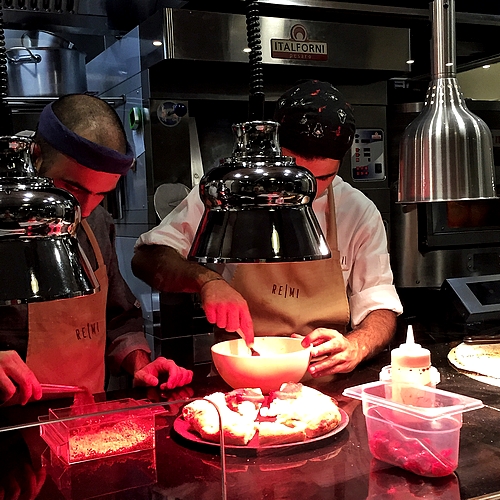 Cubeddu won't stop Re-Mi. By September 2017 is a new opening of a store devoted exclusively to pizza in tray alla romana and sale of bread. You can buy takeaway and there are no seats. For his Re-Mi, instead, the goal is to reduce the number of covered, to give customers a better service by enabling him to make a more concentrated tasting menu. There is no, in d-I, the obsession with locally grown or the raw necessarily sarda: some products of the island are certainly used, like tuna, the local cherry tomatoes, the meat of “The Salis” of Ploaghe, the pecorino cheese, Sardinian lamb Igp, the mullet, the caper of Selargius. Green light though the menu also to the good there is in Italy and abroad: from prosciutto San Daniele Dop aged 16 months burrata di Andria, anchovies from the Cantabrian Sea with Mortadella Igp until the stracciatella pugliese. Let's talk prices: the classic pizzas, with traditional sourdough batter, range from 7 to 10 euros euro Daisy “Campidanese”. The price goes up, and very, for the pizzas with double levitation, two types of proposals for both the basics “Focaccia” both for the basics “cookie”. The first costing between 17 and 18 euros; the second between 19 and 25 euros. The same pizza dough cookie is used for so-called “Pan crock”: stuffed buns stuffed with creative and unusual combinations. Price between 16 and 20 euros. 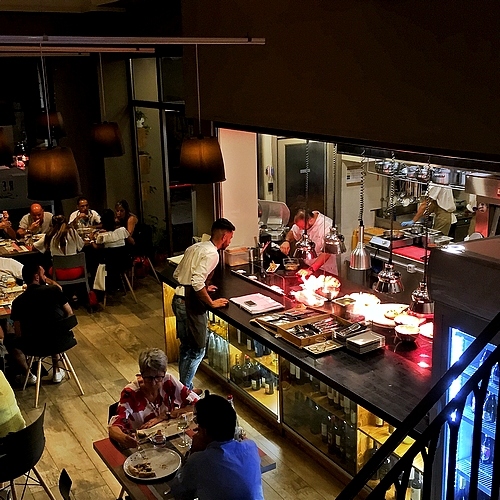 The formula of Re-Mi includes both fixed and pizza is the pizza of the day, that vary depending on the availability of ingredients. The restaurant is also open for lunch with a variety of dishes made with the same raw materials that will be used in the pizza of the day. From “Re-Mi” dining in a contemporary setting, minimalist, on two floors, with murals on the walls and neutral tones in the furniture and walls. Parquet, wooden tables, Black chairs in plastic and metal. The kitchen is the hub of environment and is completely exposed. La mise en place is minimal, No tablecloths. In the Loft, a multicolored piano. The crew is composed of six members in the kitchen, one of which is dedicated exclusively to pastry (but on the basis of the indications of Cubeddu). In sala polite service, sympathetic and considerate but, When the place is full (as in my case), you feel the need for a further help. Three kinds of dough: the classic, that does not use any type of yeast but which is worked with indirect method, by preparation of the biga, using the hydrolysis of starch of burghul. The dough is made from 60% by flour type 2 (Molino Della Giovanna), at 10% from spelt (Marine Mill) and the remaining 30% from broken wheat. Hydration is at 75%. Then there's a body double levitation, with the use of sourdough, prepared in two types with two different ways of hydration: at 100% for the pizza guy “Focaccia”, at 60% for that kind “cookie”. In this latter case, Cubeddu uses a special procedure: the disco lying is steamed and, afterwards, knocked down and kept at a constant temperature, below zero. Then, at time of service, is passed back in the oven and seasoned. 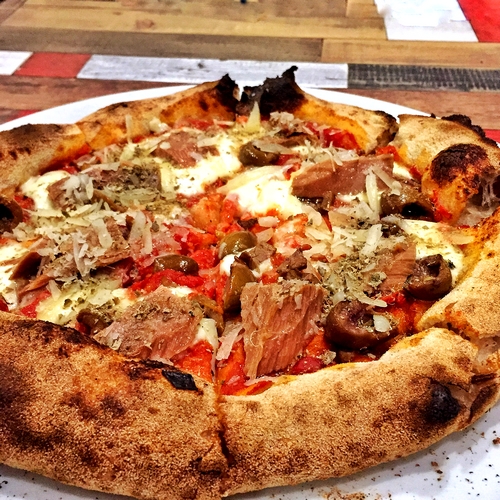 The menu includes a variety of finger foods (between 7 and 10 euro) served in generous portions. Among these, some classics like bread oil and culatello, the Cantabrian anchovies with stracciatella and tuna in oil, But even the pâté de foie gras, with brioche, peach compote and lemon sorbet. Among these, gather some combinations which are offered in pizzas, like red shrimp tartare, lime, Mint, flax seeds and wasabi mayonnaise. We chose to try three pizzas, one for each type, without going through the appetizers. All pizzas are served one at a time and already cut into wedges for easy sharing and tasting. Our first choice has fallen on a traditional sourdough pizza dough, with final draft of brick in grits, before filling: pizza “Carloforte”, with roasted tomato sauce (home made), Fior di latte, tuna in oil, lemon zest, powdered capers, Sardinian olives and pecorino. The pizza has a raised ledge, fragrant and crisp, never yielding to the base, with a clean background, well done and well risen dough in the oven (electric). The taste is full, with a filling, abundant and well distributed, never excessive and in good balance with the dough. 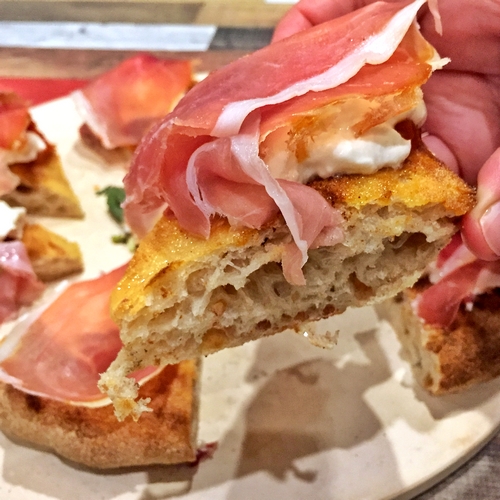 The double dough leavening occurs, in both versions (biscuit or bagel), with a base higher than the sourdough pizza, with a less pronounced cornice and an interior light always, well ventilated. In version focaccia, very hydrated, the base is crisp, with crumb high and alveolata, extremely lightweight. Even the top of the pizza is crispy golden and can withstand the weight of the filling that, in our case, consisted of a great prosciutto San Daniele Dop aged 16 months, burrata and roasted tomato sauce. Very pleasant on the palate feeling crisp and soft contrasting; a basis for anything oily or greasy, that values the filling, that itself is very tasty. 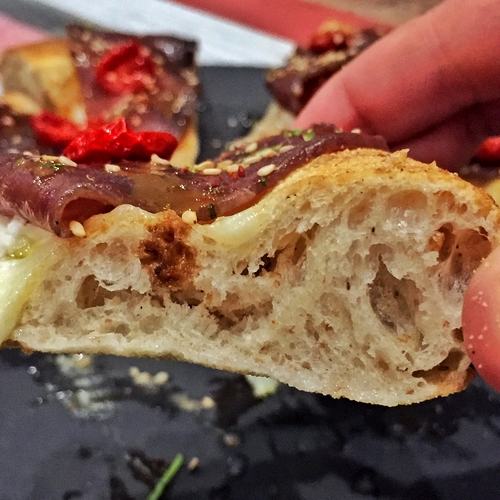 3rd pizza, the double levitation with biscuit. A pizza slightly lower than most focaccia and biscuity base, crunchy on the outside and soft inside. Being firmer, lends itself to the most important toppings. These are, In fact, the pizzas which cost more. If we were in Rome or Milan, pay 20 euros for a gourmet pizza would be considered normal, in Sassari is probably not so. To judge these pizzas so ambitious, However, we should watch very carefully the ingredients, both in terms of quality or quantity. We tried a pizza from Oriental perfumes, with tuna carpaccio marinated in lime, vinegar and soy, stracciatella, sweet chilli, Sun-dried tomatoes and toasted sesame. 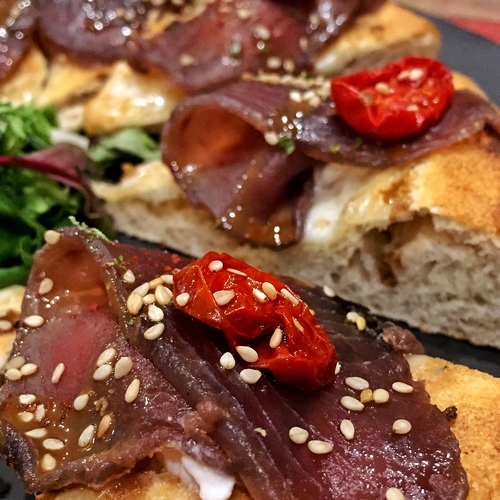 Eight thick slices of raw tuna carpaccio and marinated would be served in many restaurants already at a price of 15 euros, as a starter fusion. I have observed other pizzas of the same type, like the one with sliced beef trevisano, mozzarella, nuts, Brown stock and pecorino cheese. Even in this case, on the pizza were placed eight thick slices of sliced beef. Is’ clear that these proposals are dedicated to onlookers and enthusiasts who are, in some ways, a unique and complete meal, ranging from carbohydrate to protein. The quantities are plentiful and not comparable to those of classic pizzas. For this reason I justify the price, especially since Re-Mi you can choose to spend between 7 and 10 euros for more traditional pizzas. 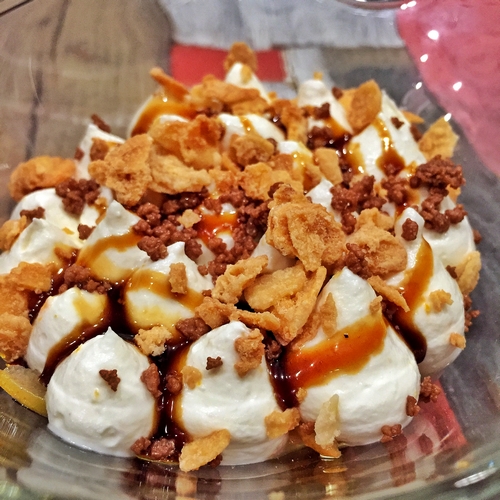 Finally, sweets. All chef's creation Cubeddu, who oversees the work of the pastry chef in the kitchen. We tasted a decadent desserts., made with thin slices of raw pears, marinated with ginger and covered in cream cheese, with sapa (cooked) and crisp chocolate chips. A sweet fresh and well balanced, with a pleasant spiciness, perfect after a hearty pizza. 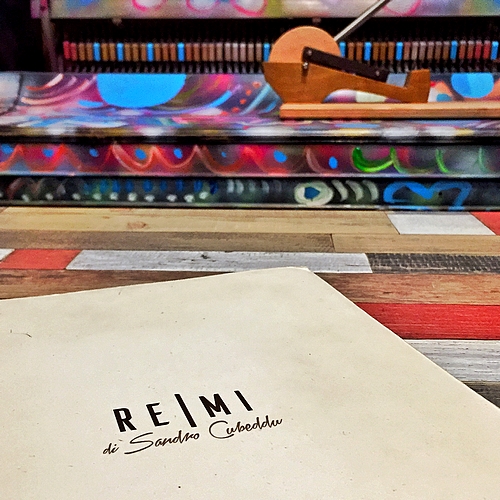 Made in Italy. Cheese from Sardinia: Pecorino di Osilo

Holidays in Sicily: 8 itineraries of...

Sicilian, journalist, food writer, traveller. I live in Rome. I love to tell the beautiful and the good of Italy. Read more