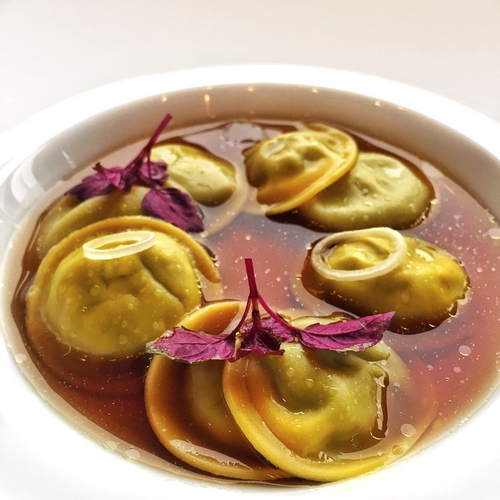 Montalcino really needed a creative restaurant in the true sense of the word. And he found it thanks all'avvicendamento in managing Osticcio, local historian in the heart of the town became famous thanks to Brunello, which for years it has been a tavern with small kitchen and now it has become a gourmet landing, that does not turn its back on local raw materials. Today, with the idea of ​​Giuseppe Valter Peretti, entrepreneur from Vicenza in the tanning industry, and owner of Tenuta Ridolfi, the kitchen of the restaurant in via Matteotti is from December 2017 in the hands of the chef Ronald Bukri, 30-year-old Albanian origins. The restaurant officially opened to coincide with the premiere of Brunello di Montalcino, in February 2018. Joining him in this adventure “unexpected” There are Francesco Perali (master di sala) and Alberto Ponzio (sommelier). In the kitchen, a proven team of three young chefs (Michele Moroni, Simone Franzoni and Matthew Leonetti) with experience in various and famous restaurants of the boot, from North to South. Is’ Paolo Lopriore was initially to shape the style of Bukri, who then had the opportunity to also deal with the French cuisine as “Sketch” (a Londra) by Pierre Gagnaire and “Guillaume” in Australia. Then, valuable experience with Igles Corelli (Atman) and one with Terry Giacomello all'Inkiostro Parma. 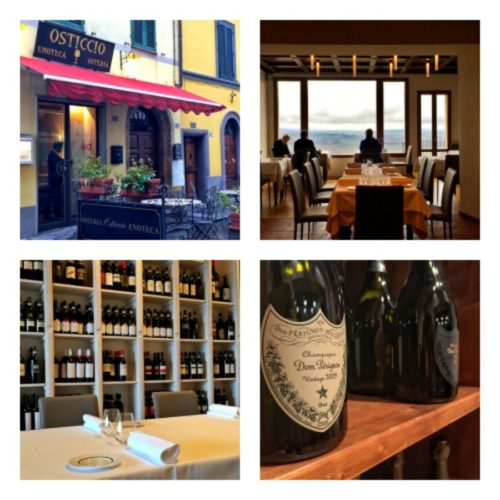 In Montalcino, Ronald Bukri wanted to bring a synthesis of these experiences, customized and illuminated by some of his passions: fermentations, the canditure, the risings and citrus fruits. Magnificent to me that I'm Sicilian and I citrus fruits in the DNA, see a room full of refined citrus crate (Ronald is supplied by a company specialized in Pescia, in the province of Pistoia) and feel in the dishes the aroma and taste of “Hand of Buddha”, the finger lime red and yellow, flower blossom, bergamot, the many varieties of rare oranges. Beautiful local, bathed in light: the great strength of Osticcio (20 seats), It is in fact a large window that overlooks the Poggio Osticcio, which makes unnecessary any decoration or framework to light gray walls, because especially on fine days the look is completely captured by the panorama of the Val d'Orcia, Unesco heritage. This is also why, the local decor is intentionally minimal. With a simple table linen, enriched by a careful choice of cutlery (Cutipol), knives (Saladini, ancient Tuscan cutlery in Mugello) and wine glasses of Zalto. The only known decorative, the beautiful creations of paper mache Carlotta Parisi, Montalcino young artist. 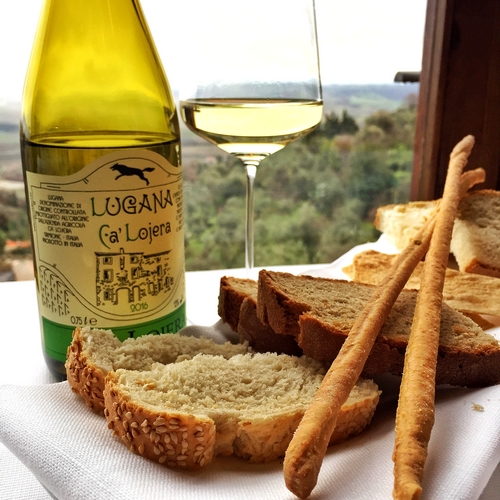 The restaurant is spread over three floors. On the ground floor the kitchen (a small kitchen, where one moves with acrobatics, but perhaps it will soon expand) with the herb garden; the first floor is the wine shop, very well starting from the labels of Champagne, up to the best Italian DOC and DOCG wines, A particularly sought after choices and with an extensive presence of Brunello di Montalcino Docg. From Osticcio, you can also come to buy a simple bottle of wine and, Therefore, markups on alcohol sale are considerably reduced. Excellent quality-price relation. In the bread basket, good breadsticks corn and chamomile (home made products), while the sliced ​​bread with sesame seeds, the Tuscan ancient grain breads and muffins are purchased in a bakery in the nearby village of San Quirico d'Orcia. The table service is polite, Quick, informal and very courteous. 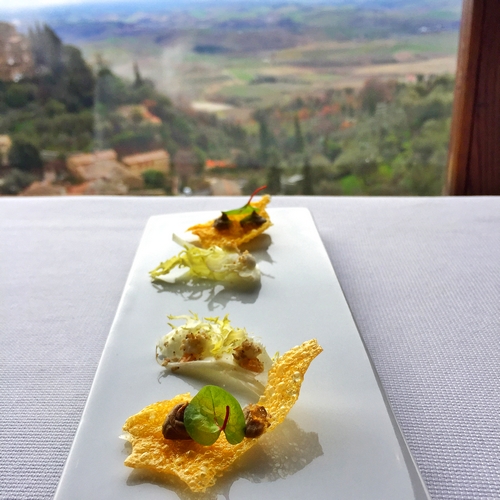 With wine (Lugana Doc company Ca’ Lojera) comes the chef's welcome: polenta wafer with mousse livers vin santo and a curly salad with a soy mayonnaise and gomasio (sauce made of sesame seeds and salt). Two tasting menus offered by Osticcio. The first is the authorial Bukri chef (My trips), It consists of seven courses at 65 €. The second is a tribute to the region (Travel in the tradition), four-course dinner for the price of 45 euro. In paper, five starters, five first and five second, all meals other than those that make up the chef's menu. Among the starters (15-19 euro), eel with lentils, citrus and sour milk but also foie gras with saffron honey, pears and mustard. Among the first (15-17 euro), risotto in zimino, with beets, lamprey and cuttlefish; propellers with crumbs, with anchovy, mullet orbetello and sweet garlic. within seconds (20- 22 euros) triumphs meat, with the lamb, the pigeon, the sirloin and the Cinta Senese pig. But there is also a cod with black olives, chicory, milk and oats. The first restaurant prevalemente come from local and regional vendors materials, such as lamb pomarancino (Slow Food), eels and mullet arriving directly from the lagoon of Orbetello, while shrimp and cod are provided by Selecta (company that provides products for catering). 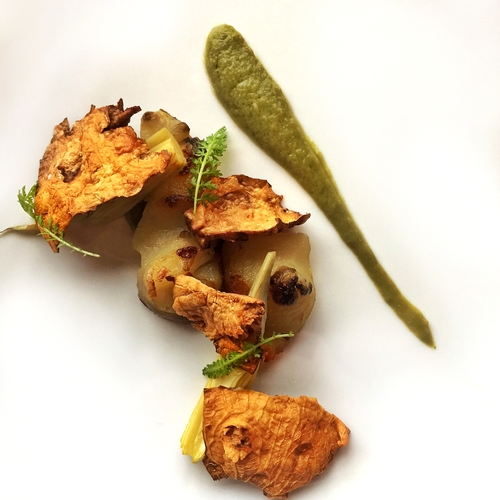 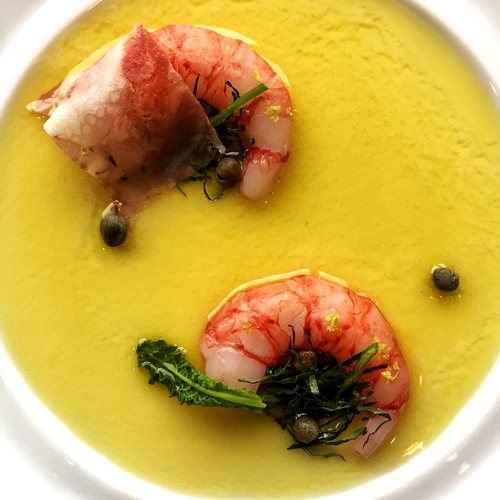 Then the table comes the red shrimp from Mazara del Vallo, served raw, with black cabbage, Capers, brawn and a mayonnaise with honey, obtained by mounting oil, Salt, honey and lemon. All of the scent of orange blossom. A dish with a sweet and delicate trend, and the intense fragrance of honey, it loses some’ balance due Tuscan extra virgin olive oil used, intense flavor and persistent bitter and spicy elements. I would taste it again with a more delicate oil. 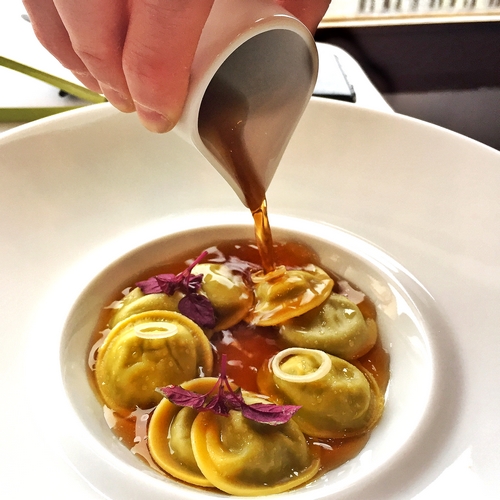 Definitely promoted the ribollita buttons, i.e., ravioli pasta stuffed with kale and beans, served with a toasted bread soup. A plate very well executed, wherein the softness to the palate of the ravioli (Handmade) It is balanced by bitter aftertaste of bread broth. A tribute to ribollita, a historic recipe traditional Tuscan, that this dish contains all the ingredients. Compared to the traditional recipe, the appearance is very different, the ingredients are presented in different textures, but above all in the final, the flavors of classic ribollita there are all. And the broth of toast is a winning idea: bitter and slightly astringent, It enhances the poor but tasty filling for ravioli. 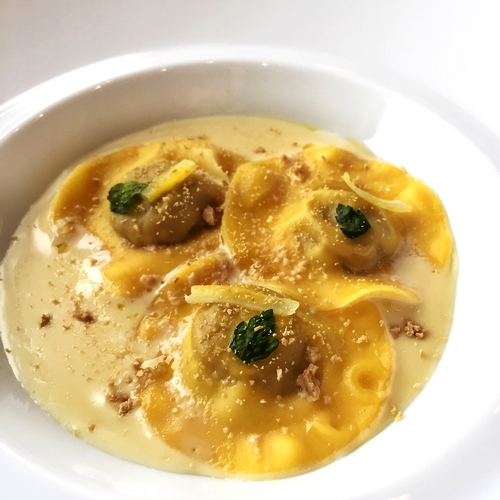 Still ravioli for the second first: those of pigeon with brown butter, candied lemon zest and yeast. Buoniossimo ravioli, with a very tasty filling, made with bones and meat pigeon. Very guessed the candied lemon and salt, intense aroma and fresh. Excessive in my opinion the amount of yeast, present in the sauce (some’ oily) and used as a gasket (dried and grated). 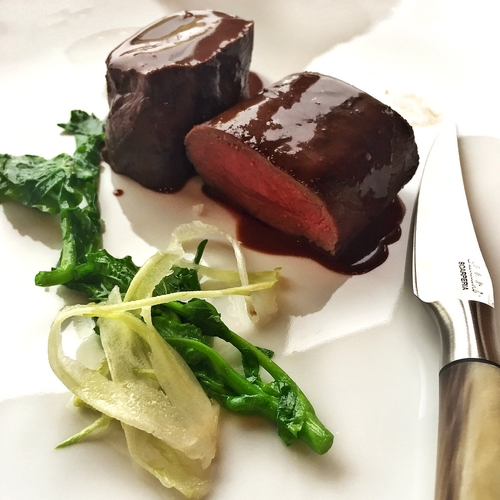 Faultless the second plate. Venison with sauce dolceforte, crisp with chicory and turnip greens. The meat, cooked in a pan, It was soft, underdone, juicy; the sauce dense dolceforte, creamy, intense, with a delicious cocoa scent; vegetable elements have given freshness and balance to the plate. The sauce has dolceforte likely to Renaissance, It is flavored with cocoa, and he has always accompanied the dishes based on game. 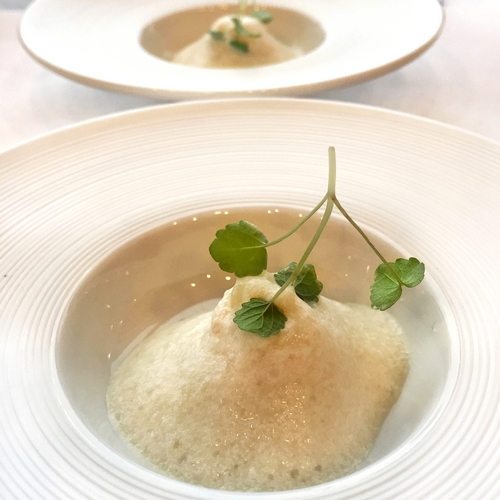 Pre-dessert taste deliberately, and perhaps exaggeratedly, neutral. Foam of soy milk, almonds, yuzu (even a citrus fruit) and anise shoots. A fast and suitable bite to cleanse the palate and tongue in view of a more complex desserts. 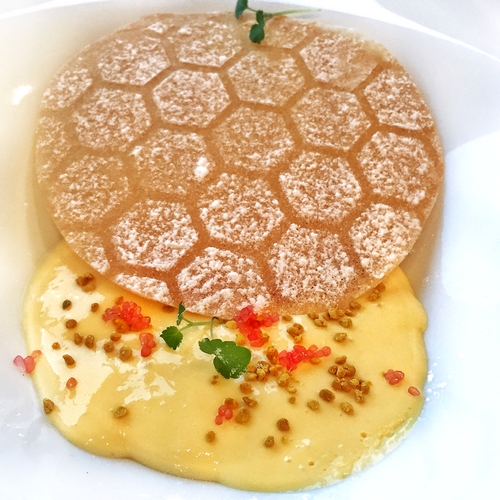 The cake is one of the chef's specialties Ronald Bukri, He dedicated personally to the restaurant pastry Osticcio. A pasta wafer brik, slightly salty, with a Bavarian honey on, pollen and red finger lime. A plate sfizioso, greedy, elegant and surprising. The honey scent is intense, but well balanced by the finger lime. Really an interesting dessert, as it is certainly interesting cooking Ronald Bukri, It is doing Montalcino for a gourmet destination, and not just for wine lovers who are satisfied with a platter of meats and cheeses and a plate of pici with duck sauce. Because drinking well is pleasant, but it is even more enjoyable accompany with a fine wine as an excellent dish.

Itineraries: the Castle of Meleto, history,...

If you switch from Montalcino test, then let me know. One kiss, ADA