Reviews: Osteria Fernanda, in Rome a bistro with a north European soul 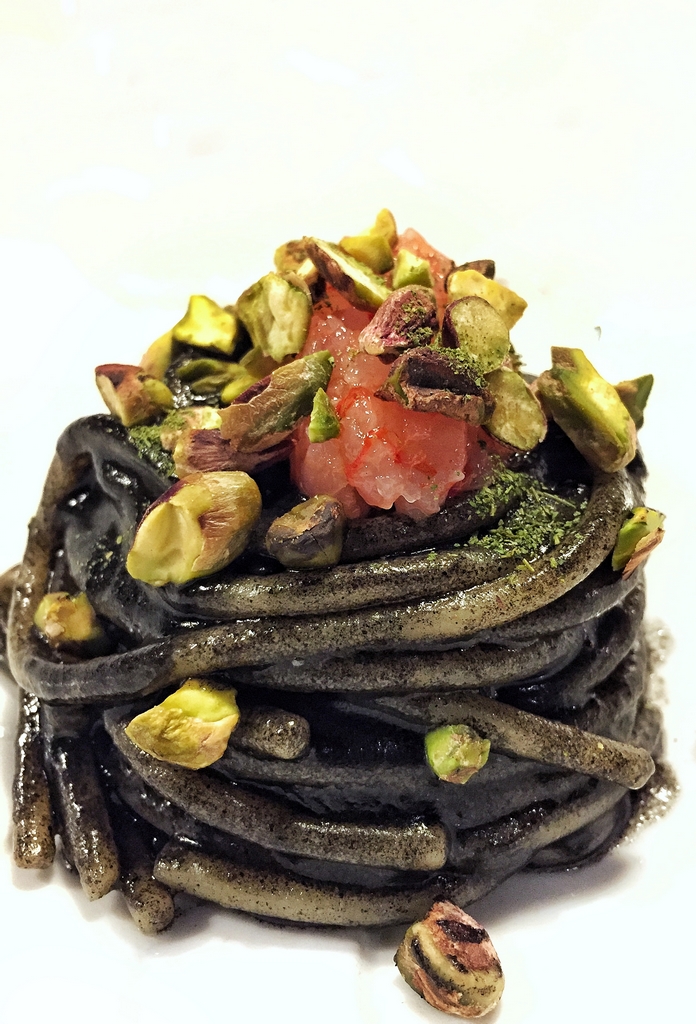 A dinner at’Osteria Fernanda in Rome, means plunging an atmosphere that, more than in Italy, It seems to belong to that of an informal northern Europe, perhaps a bistro type restaurant in Copenhagen or Amsterdam. Relaxing is the right word to describe this small establishment with attention to every detail. The chef, Davide Del Duca,, that create and brings to the table of great thickness dishes, technical, aesthetic and flavour.

The Roman district is to Portaportese, just 5 minutes from Rome Trastevere train station, In a quiet and away from the frenetic pace of the historical center. A neighborhood with a small gourmet island, the same neighborhood as the pizzeria “Illuminati” by Pier Daniele Seu and the artisan pub-brewery Luppolo Station. Here, a team formed by the chef and Manuela Menegoni (in room) and Andrea Marini (sommelier) has been able to build a cozy and trendy restaurant, based on substance, with never predictable creations.

From 2017, Chef Davide Del Duca, 37 years, Roman and hailing from Ciociaria region, He has become part of the Jeunes Restaurateurs d'Europe circuit (Jre). Del Duce to O salt. His dishes are often discussed, even at the table. Acidity, textures, temperature, colors, use of fermentations. A local raw materials but also international, attentive to the fifth Roman fourth, as to the suggestions of the most modern cuisine. The dishes are first of all nice to look at. And the ones we tried were also good to taste, full of flavor and color, with a #8217;modern, detail-conscious aesthetic.

A kitchen, the Osteria Fernanda Rome, carefully thought, behind which we read a great work of well enhanced by soft lighting research, almost subdued, that illuminate the room. Lounge music, Decent, spreads from the speakers. The tables are well spaced and laid with essentiality. There are tablecloths. About forty places, all facing the street, from which the interior thanks to large windows are clearly visible. On the walls, one of the tavern assets: the wine. 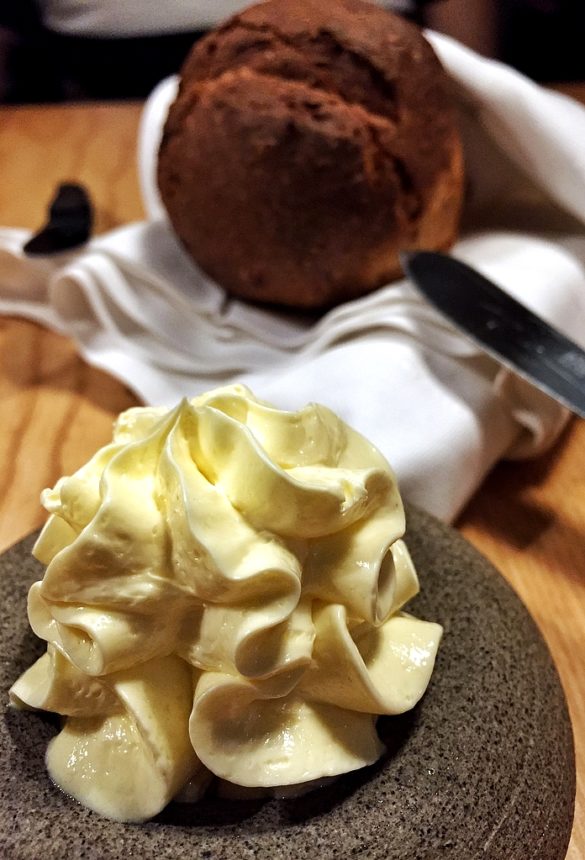 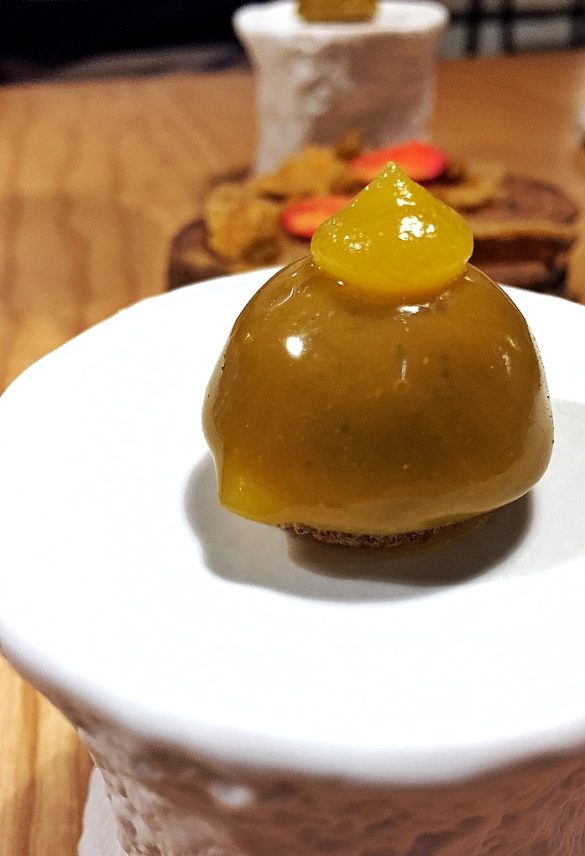 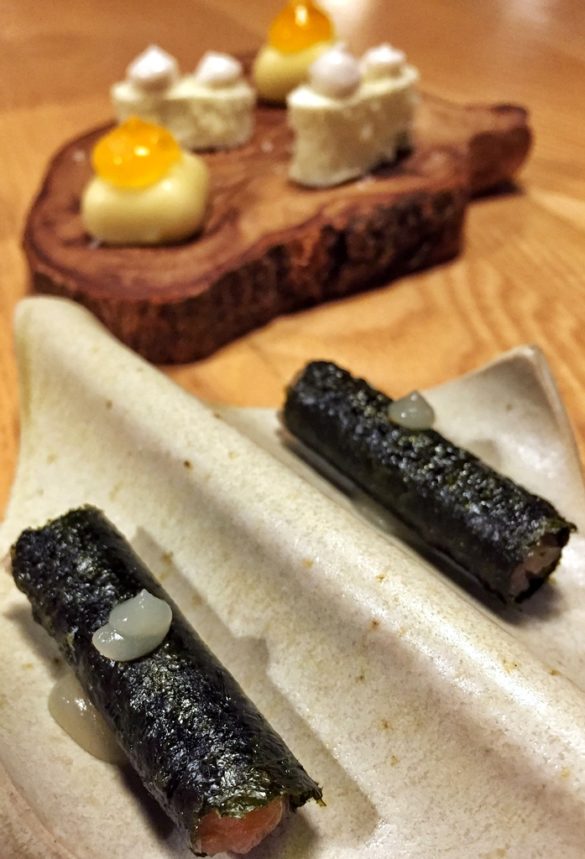 Osteria Fernanda offers four tasting trips. Four courses for 49 euros chosen by the chef. Six courses at 59 euros in the 'curious craftsman' menu. Seven courses at 69 euros in the menu called “path” and, Finally, the big ten-course menu (100 euros) with a tasting path chosen entirely by the chef Davide Del Duca. The strength of the Roman club is also in the formula that is proposed for lunch.

A three-course business lunch for 20 euros and four courses at 30 euros, built around the traditional Roman dishes, such as pasta carbonara or bucatini amatriciana. The traditional dishes are also accompanied by some modern workhorse designed chef as peppered mussels or the garden and leaves. To the paper, appetizers between 15 and 18 euros, first courses between 6 and 18 euros, second dishes between 20 and 25 euros and sweets 9-11 euros. The value of the tasting menu is evident.

We chose the seven-course menu, to which we added a dish from paper. Dinner started, in the middle atmosphere from the north European bistro, with the precious butter of Normandy worked in cream and its unmistakable aroma of milk and hay. Accompanying, a warm bread made with natural yeast.

Then, comes packed chef welcome: a delicate tuna sushi served with jelly of citrus; a quinoa waffle with miso powder and carrots; the white chocolate, peanuts and Crodino gel; a marshmallow arugula and anchovies. Special mention goes to all praline chicken and lemon gel livers: an extraordinary concentration of taste and flavor, even too challenging if served at the beginning of a dinner. 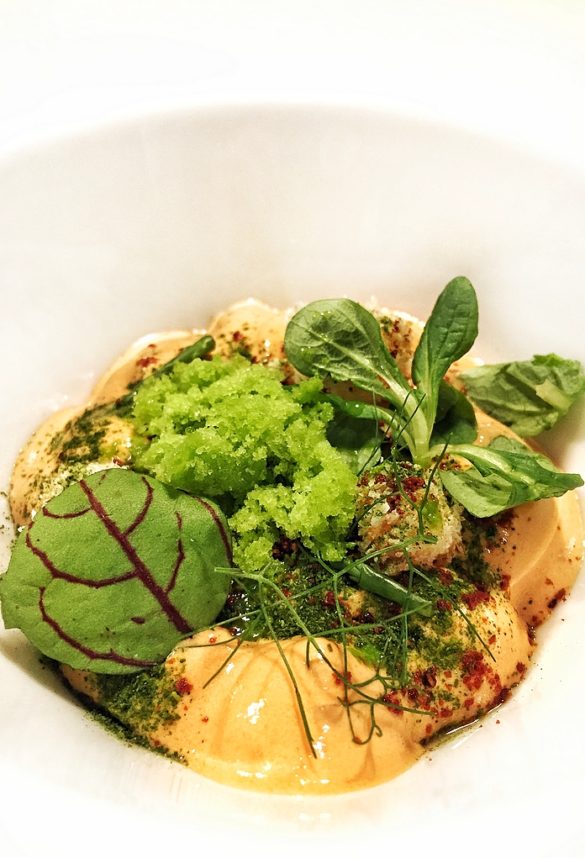 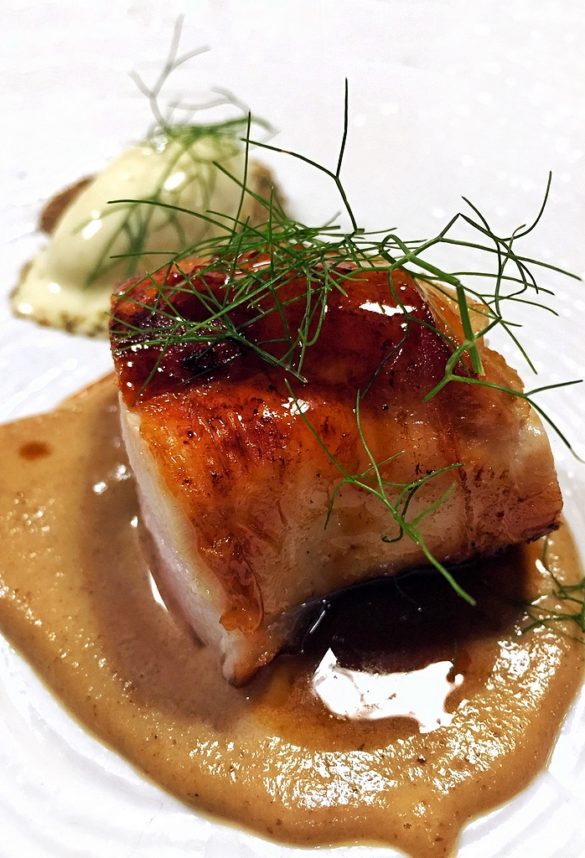 The peppered mussels is a surprise. An experiment daring and successful reporting the sensations of the sea in a bold dish, at first glance, does not remember for sure the sea. The dish is composed of mayonnaise pepper, mussels in Sardinia, mayonnaise mussels, Mussel water, powdered lovage, granita Salicornia, Meringue salt and herbs. A mix of textures and temperatures to eat in one breath.

According appetizer with the rabbit and Jerusalem artichokes, served with a hazelnut cream and glaze gravy, accompanied by a wild fennel-flavored ice cream. Lightness, Balance, excellent cooking meat, It proved to be very soft. An unusual appetizer and very well managed. 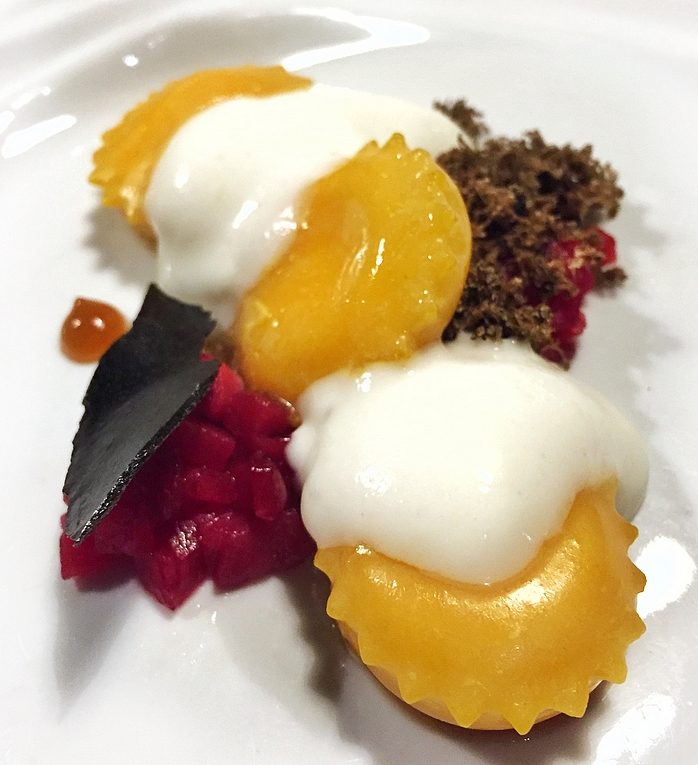 The first courses of Osteria Fernanda in Rome

Then, one of the chef's traditional dishes, always in paper. The buttons stuffed with egg yolk beaten with tartare meat with a knife, cream of parmesan and truffle. Crispy pasta that encloses an explosion of egg yolk perfectly combined with the sweetness of raw meat and the flavor of parmesan cheese. Truffle almost superfluous, considering that we are in front of a thick plate of flavor and perfectly realized. 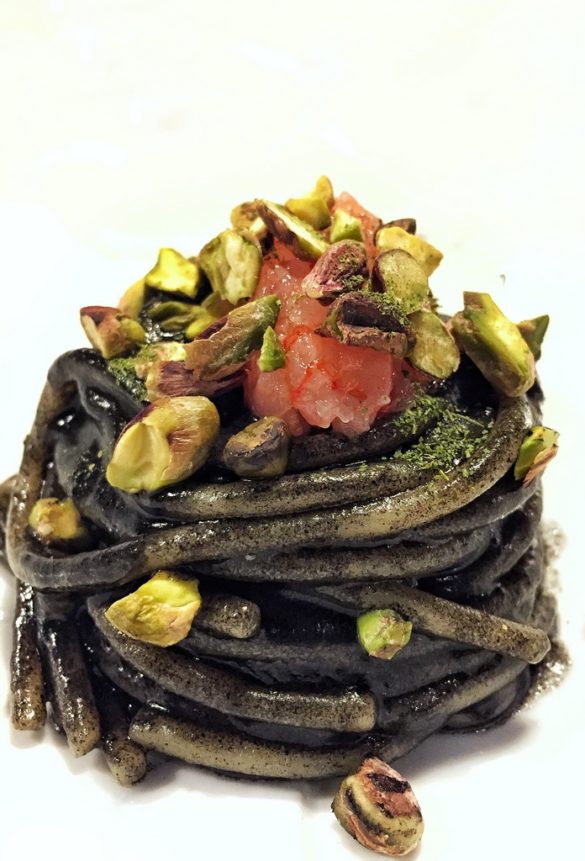 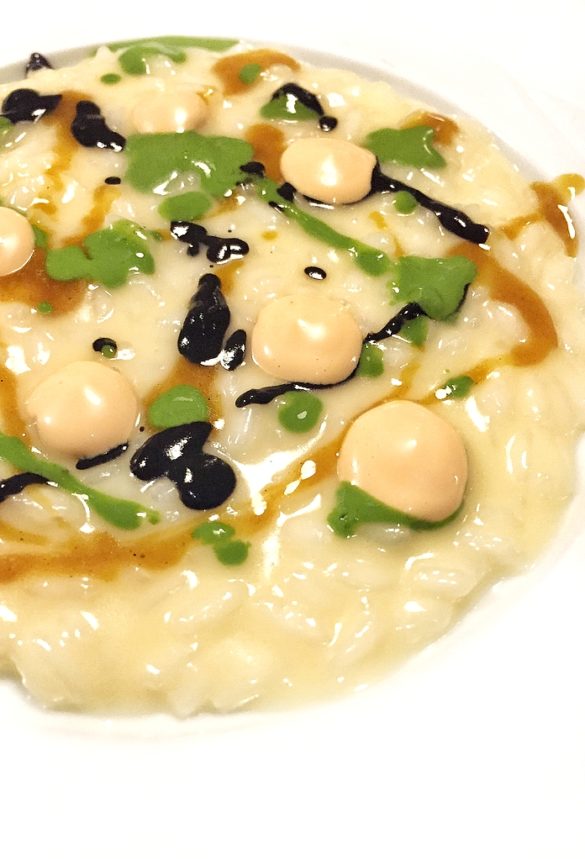 The first dish we added to the tasting menu is another historical recipes of chef Del Duca, one of the evergreen proposals Osteria Fernanda: spaghetti with burnt aubergine, Gambero rosso, coriander and pistachios. At first glance it would seem a piece of spaghetti with black cuttlefish, because fiction is very well staged: in reality it is a burnt eggplant cream colored with charcoal. The cooking of the pasta al dente, with net smoked hint of aubergine, crunchy pistachios and delicate and fresh shrimp. To try.

The risotto (there is always a rice paper from Osteria Fernanda and for us this deserves praise) He had the taste of sea: risotto to dripping of hedgehogs, herbs, sepia and burnt orange. A flat risky from many points of view. The first, the risotto cooking, perfect; the second the balance of sauces. The view on the plate is remarkable: Green, White, nero, Brown.

David Risotto Del Duca, in our opinion, It starts from a good basis. In flat, the result of careful study, no precise idea of ​​how to create contrasts between sweet and bitter, but it is a recipe where evolution is still possible, especially in dosages of sauces. 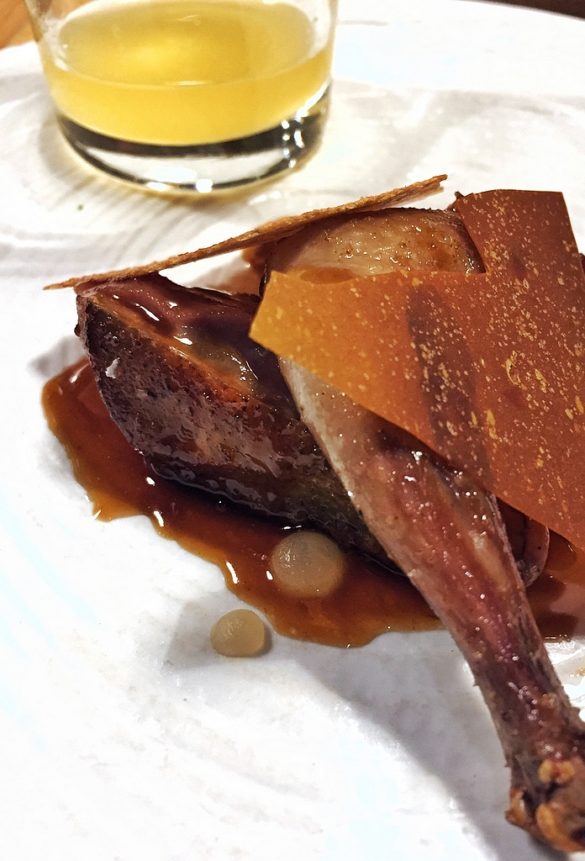 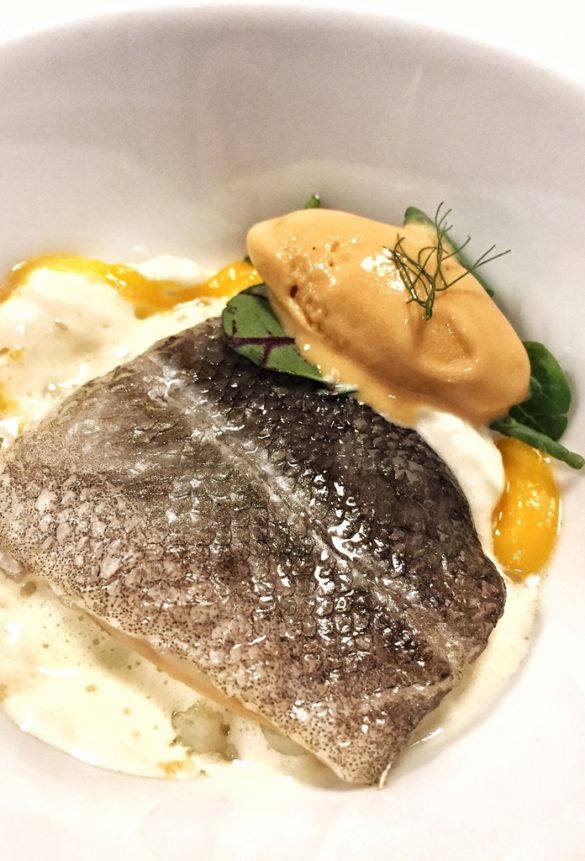 The sea returns to the table with steamed cod served with a froth of beurre blanc, an ice cream with sea urchins, kumquat sauce and fermented cod blown skin. In this recipe, the chef tries with intelligence to get the right balance of flavors exploiting the contrast of temperatures.

This is the only recipe that has not convinced us completely: the composition is reminiscent of the fish dishes found in restaurants in southern France, but overall the dish is too fat, except at times when it captures the citrus sauce, and the delicate taste of the fish is dominated by the beurre blanc sauce.

The second floor is forgetting the uncertainties of the sea: the pigeon and hazelnuts. An essential interpretation of the game, exalted in the traditional way in the taste of the meat and modernized by pairing. To accompany the dish, a soft drink: il kombucha, obtained from fermented tea thanks to the action of yeasts and bacteria, with a taste that ranges from sweet and acetic. Great degree of cooking meat (soft and easily chewable). The pigeon, He served with its cooking juices, an onion gel and a crispy wafer. The taste of hazelnut brings out the red meat. Excellent. 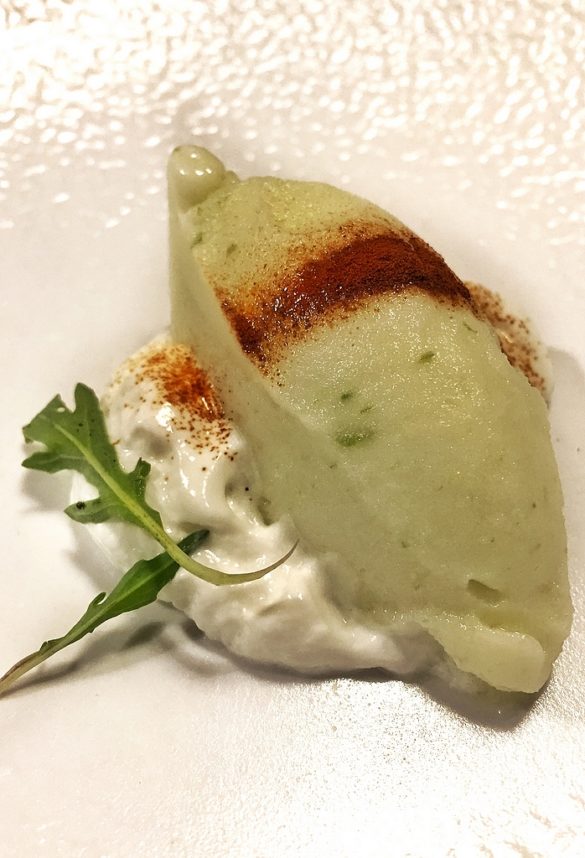 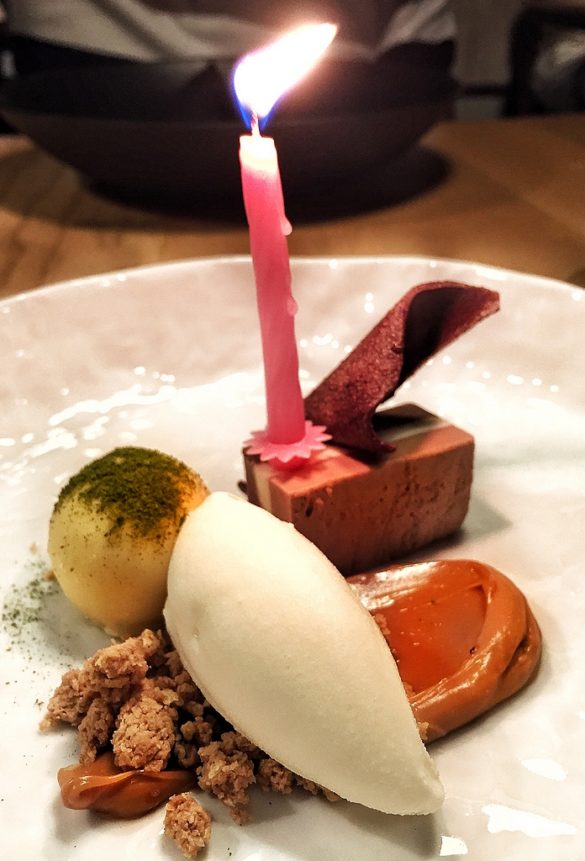 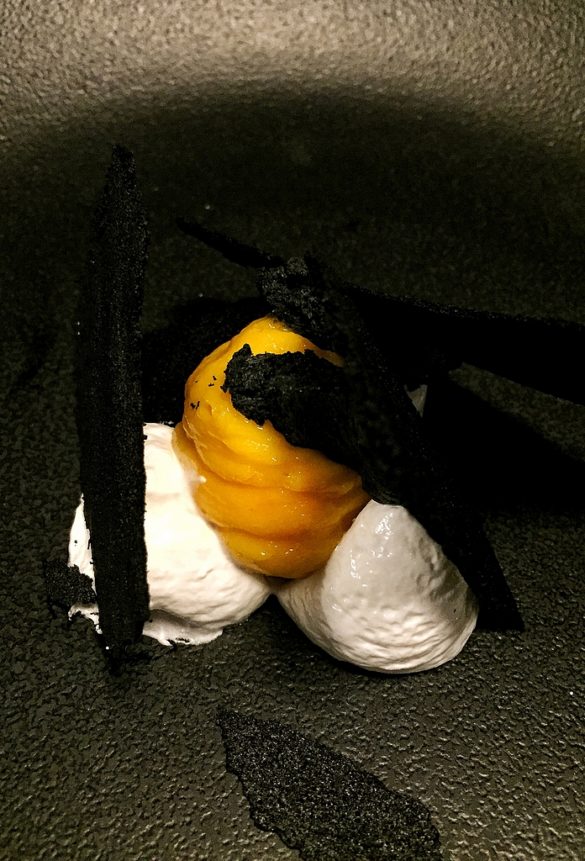 The pre dessert is a concentrate of acidity and freshness, thanks to a green apple sorbet accompanied by a froth of cucumber and licorice powder.

Then, another of the chef's traditional dishes, The 'Dark citron', a reimagining of the classic citron tarte. Black biscuit is made with lemons that have been fermented for a month. A process that leads them to a stage where they become blacks acquiring a different acidity. Great visual impact of this sweet, in our opinion, It lacks a more thrust acidity, to counter all the fats and sweets items.

Chocolate, milk, Mexican tarragon are the three ingredients of one of the most delicious cake Osteria Fernanda in Rome. The dish comes from a childhood memory of David Del Duke, like so many others, It was greedy of the famous “cremini Bar”, made with three layers of chocolate.

The reinterpretation of the chef is based on three chocolate ganache (White chocolate passion fruit, smoked dark chocolate, milk chocolate), served with roasted white chocolate and caramel sauce, with a savory sorbet milk powder and tarragon. For chocolate lovers, a dessert not to be missed. 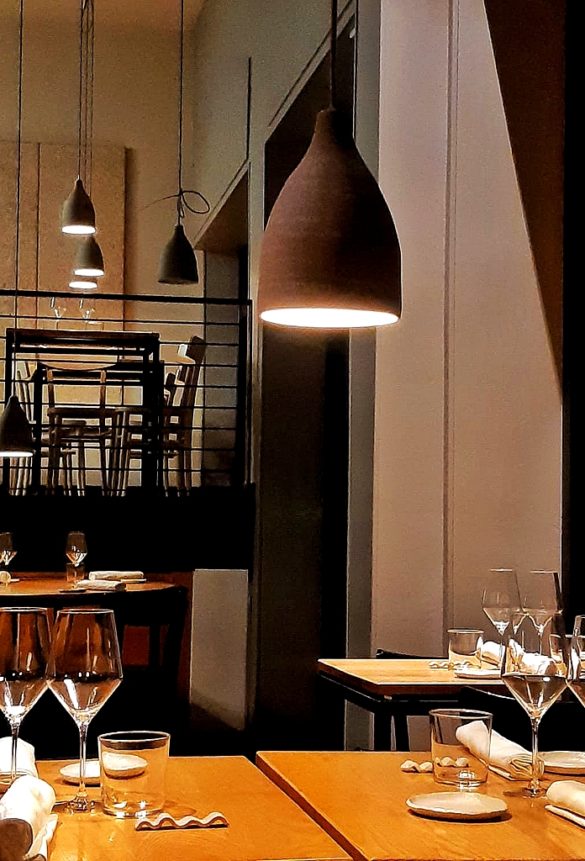 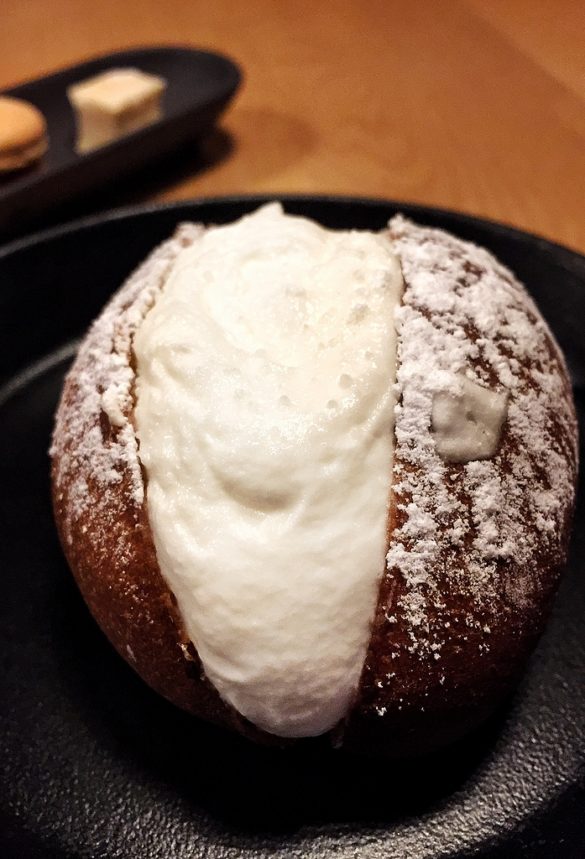 Nice concluded in the name of the Roman tradition with his majesty the currant and cream. A tribute to the city that houses the Osteria Fernanda, a classic pastry Rome. Soft, with whipped cream not too fat nor too sweet. A sweet breakfast so well done that, despite the abundance of the dishes tasted, do you eat whole. Excellent end of one of the best dinners this year.

The room service is courteous, accurate and timely. The friendly waiters, prepared and willing to settle with the smile of the tables required. The wine list is very rich and cured, with over 200 Italian and foreign labels carefully selected by Andrea Marini. Marini, expert sommelier from informal and gentle manner, It is able to grasp the tastes of customers. And to suggest whenever proposals to the most appropriate cup in conjunction with the chef's dishes.

In the paper a preference for natural and organic wines, a wide choice of Italian Champagne and sparkling wines, that blend well with the dishes Davide Del Duca. A nice selection with medium to high mark-ups, but with a wide possibility to taste the wines by the glass. In view of the Capitoline Restaurants, Osteria Fernanda is an excellent blend of haute cuisine and affordability. In a relaxed and informal atmosphere away from the usual chaos of Rome. The idea of ​​Del Duca, create a level bistro in the corner of the less frequented Capital, It has definitely hit the target.