Finally Messina also has a level of creative cuisine restaurant. In my city, as in Sicily, the food is good pretty much everywhere, but until now it has always lacked someone who could interpret in an original way the great commodities, fished from the strait to the magnificent vegetables, passing for cheese, wine and extra virgin olive oil. An extraordinary potential for people to be able to manage it with technology and imagination. There is succeeding chef Pasquale Caliri, that for about three years leading the restaurant Marina del Nettuno, charming restaurant literally on the water in the harbor at Messina, looking at the statue of the Madonna of the Letter.

Given the fact that it is objectively difficult to find an equally beautiful location, the restaurant (managed by the company Comet Ivo Blandina) It is decorated in a minimalist way, and mixes modern style, in combinations and in impiattamenti, the desire to promote local products: Etna oil (company Merlin), by Sicilian grain flour (Bridge Mills), Doc wines of Faro and Mamertino, eggs (Silvio Ontario, Zafferana), fruit and vegetables from the gardens of the Annunziata district of Messina, Local and regional fish (the supplier is Salvatore Bonaffini). In short, Pasquale Caliri is a Sicilian who deeply loves his country and is still mysterious today, so much that he wanted to find out more, with the spirit and curiosity of good journalists (Caliri is registered with the National Order of Professional Journalists and the journalist has really done it in the most complex sector, judicial reporting, before turning to the kitchen). 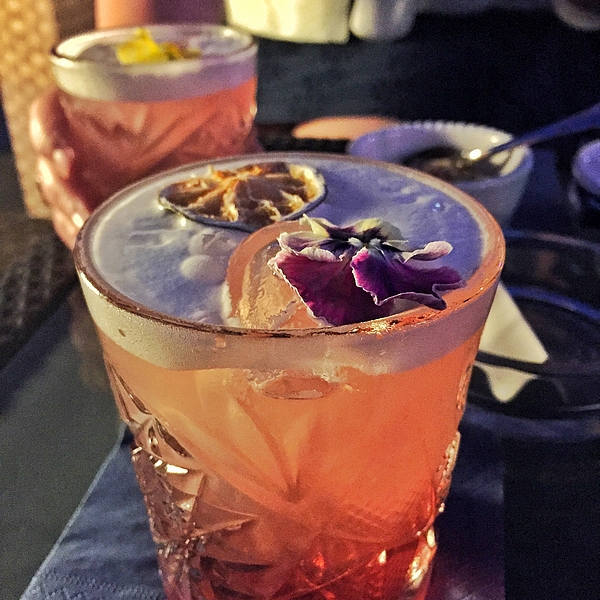 Before dinner, in sofas and tables on the water, there is room for a cocktail 100% made in Sicily created by the Sicilian barman Christian Constantine: "A 18" is an inspired cocktails to the territory, intelligent mix of carob syrup, blood oranges, lemon Interdonato, Amaro “Amara” Etna, Inzolia wines and Catarratto and a lemon flavored mousse Passito wine. The Marina de lNettuno provides convenient tasting menu priced at 65 Euros with six courses selected by the customer among all those proposed in menu, as well as the chef's welcome, pre dessert and pastry small final. A very affordable price considering that, carte, the appetizers are offered at a price between 14 and 20 €, the main courses from 16 to 20 euro, the second from 20 to 24 € and desserts 7 €. 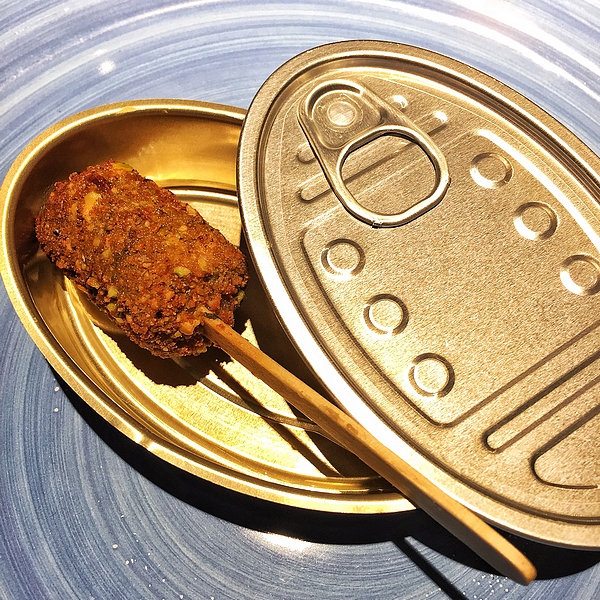 It starts in a very interesting and fun with the chef's welcome, the “anchovy Magnum”: a roll of fresh anchovies (I later discovered that the chef shares my passion for the blue fish) stuffed with the traditional Sicilian dough made of breadcrumbs, cheese and extra virgin olive oil and covered with a crumble of almonds and pistachios, served in a sardine can on a stick just like an ice cream “Magnum” and accompanied by a light chickpea. 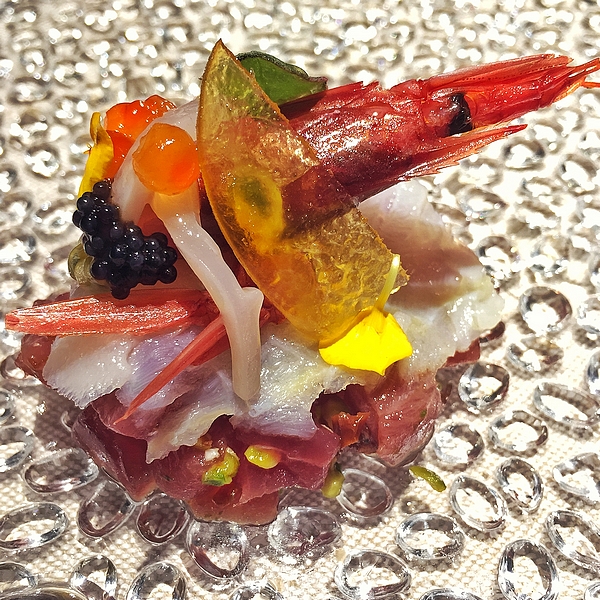 The style is contemporary Caliri, It based on a culinary philosophy that aims to respect the raw material, with a few calculations and great attention to the taste combinations and balances. The food is mostly fish, and many dishes are also suitable for those who are celiac or gluten intolerant. Among the starters, the kitchen comes the “stark with passion”: or a raw fish consists of tuna tartare, Gambero rosso, Cod Carpaccio, julienne squid, mustard fruits, lumpfish roe and salmon, jam capers and passion fruit. A dish made to taste the freshness of the fish and sweet and elegant notes of fruit mustard and capers jam. 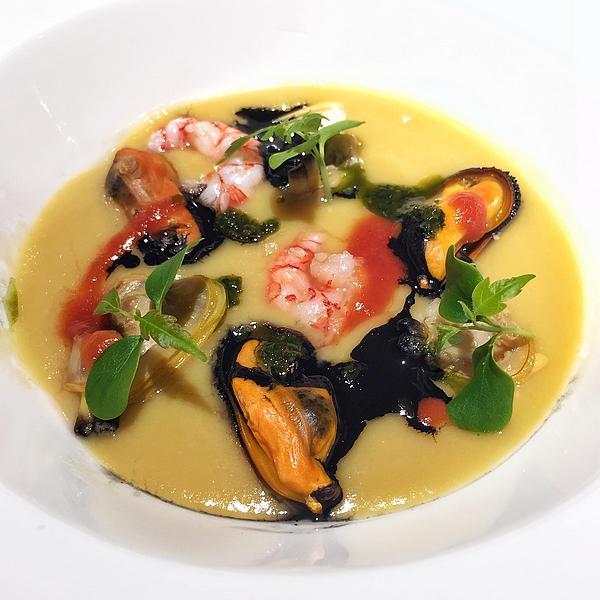 The homage to the Marquis chef is a welcome surprise, among the starters, and it takes up the theme of one of the most famous dishes of the Maestro: the fish drippings. hardening, which it was formed to Alma (the cooking school founded by Gualtiero Marchesi), He realizes it in his own way, with a delicate chickpeas on which they are lying mussels, clams and shrimp just blanched. The drops with squid ink, basil and tomato are mainly decorative but functional, because they give flavor, chlorophyll and acidity to the dish. 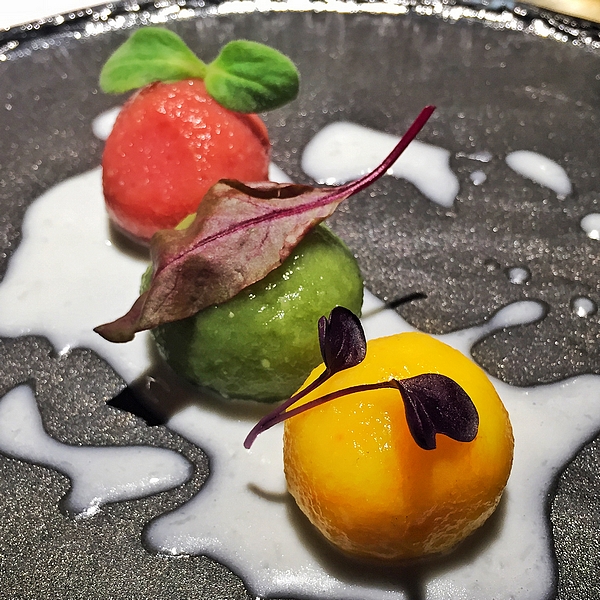 The first dish is called “gnocco wanted to have a heart” It was born after the experience made by Caliri in the Milan restaurant Joia Pietro Leemann, famous for its proposed all vegetarian (Michelin star). This is not a lump in the classical sense, but the potato balls with saffron taste, spinach and beetroot, accompanied by a cheese sauce Vastedda Belice (Dop product made from cow's milk). A good dish but not on the same level as the other we were served. 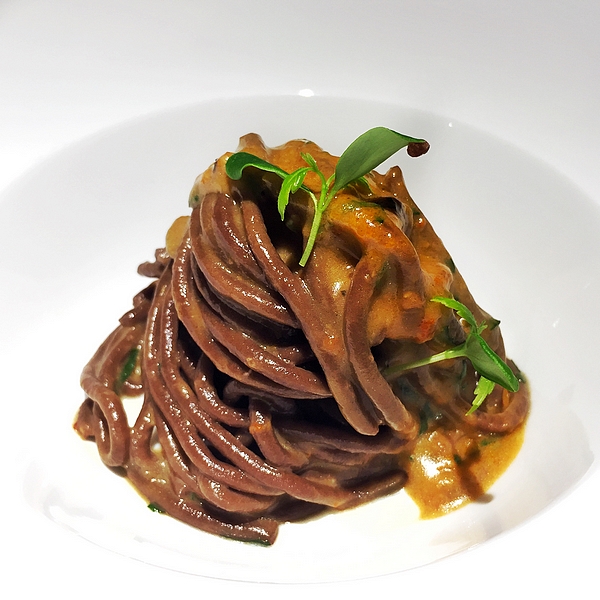 The plate “Ricci e carruba” it seemed like the most interesting combination of the evening, for balance and consistency in combinations. A simple first: spaghetti carob (the chef picks up in his father's land) with sea urchins and a creamy background with ricotta lemon. We would have gladly done an encore. 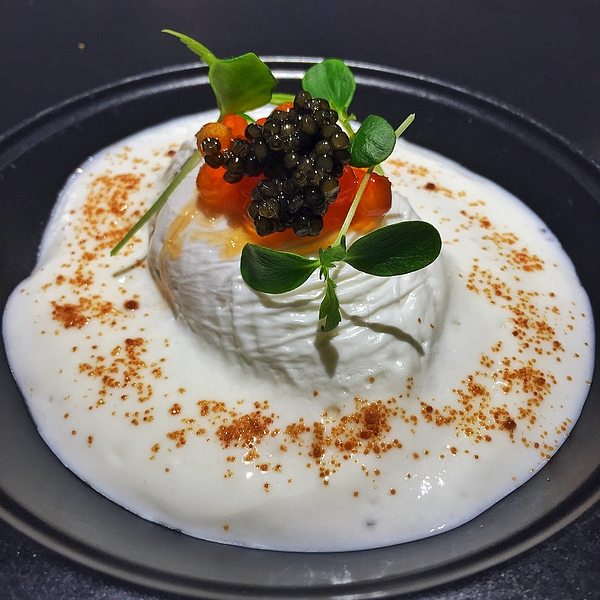 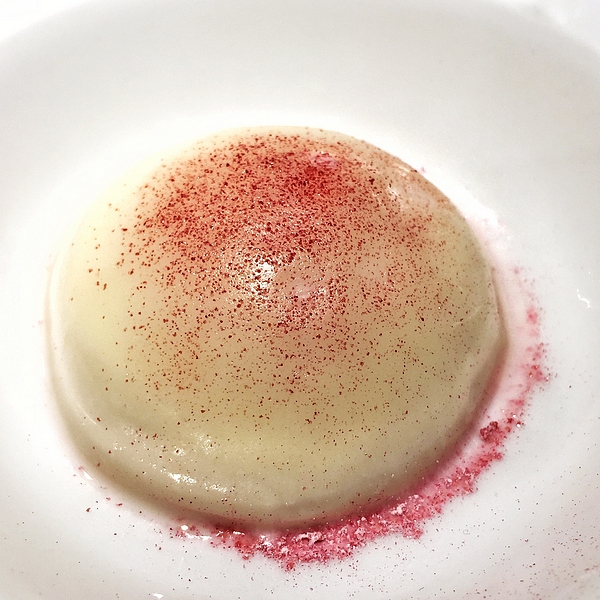 Pre extremely refreshing dessert with lychee, mousse yogurt, whole raspberries, dried raspberry powder and red fruits. A dish in which emerges the imagination and sensitivity of the hand of Pasquale Caliri, that the pastry is particularly at ease, also thanks to the great pastry chef teachings, Paco Torreblanca. 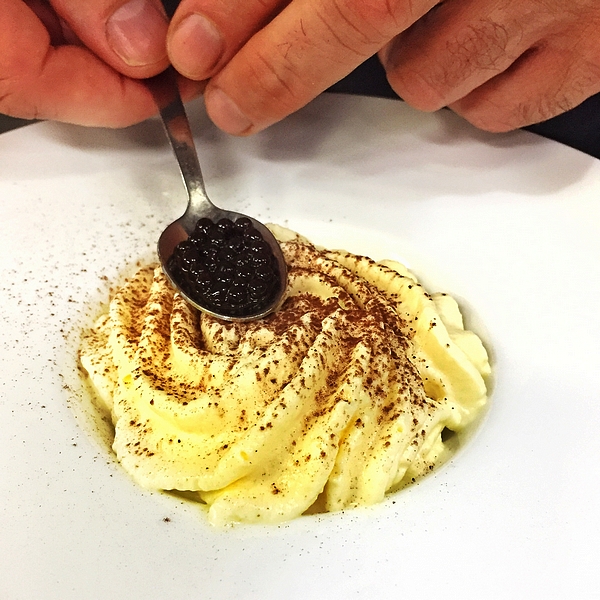 Double taste of sweet finish: the first is a tiramisu made with gingerbread and coffee cream, cocoa powder and coffee spheres. Robust and tasty. 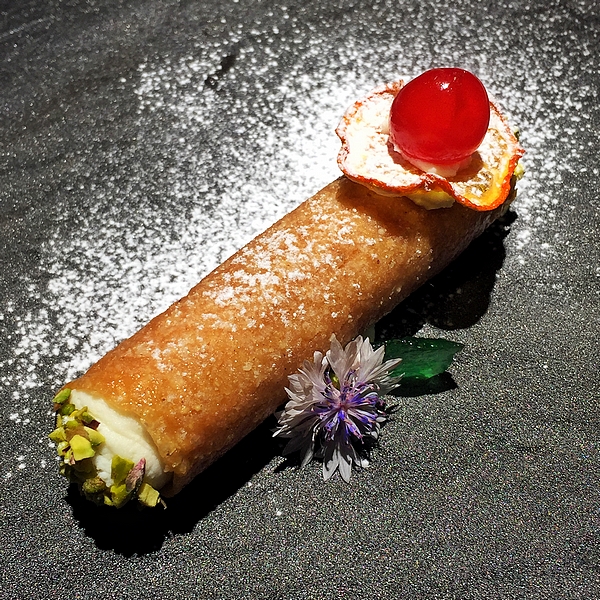 The second cake is a Sicilian cannoli, reinterpreted: with wafer made by a tuile Nebrodi hazelnuts, inside a ricotta cream with candied fruit and pistachio. Ben made the cannoli, very crisp and not overly sweet, despite the use of creams, waffles and canditure. Two desserts perhaps more suitable for winter weather, but of great goodies. Closure in extreme sweetness, with small truffles with cocoa and fruit jellies home made.

Among the wines we chose a paper Petit Arvine, Valle d'Aosta Dop, Les Cretes cellar. The wine list at Marina di Nettuno is not extensive but it enhances, a Smart Choice, Sicilian labels, by the bubbles to reds and whites still. Wines of France, Spain and Germany are fairly represented, especially those of the Champagne. There are quite rosé wines, that should not be absent in a kitchen where fish is the star. The world of rosé wine is experiencing a period of rebirth and the Italian proposal offers many denominations (Also in Sicily itself) and choice for high restaurant that wants to satisfy the needs of a more attentive and willing to experiment than in the past. The prices and mark-ups are correct. The Marina del Nettuno is positioned firmly at the top among the Messina restaurants not to be missed.

Figs and apricots baked with yogurt and honey

Reviews: in Palermo the Mediterranean style...

Reviews: Trattoria Borrello, in Sinagra i...

Reviews: the Pizzeria Verace Elettrica a...

Reviews: from Bellavista in Messina, kitchen...

What a fantastic place in front of the sea. Very particular curls and carob and amazing cannoli revisited, in addition to other delicacies.
Thanks
A big kiss

Is’ a must try if you go to Messina!