Reviews: La Capinera of Taormina, The window on the sea of ​​Peter D'Agostino

The restaurant La Capinera of Taormina It is Sicily and the sea, with that perfume and unique flavour that chef Pietro D & #8217; Augustine manages to imprison in every dish. Opened in 2003, the restaurant (that since 2008 Michelin Star) overlooks a postcard view, the beach of Spisone. D & #8217; Augustine (45 years), born in Taormina, with an important experience all & #8217; abroad between Costa Rica, United States (Florida) and England (London), He has crowned the dream of returning to Sicily and open a club in his native country just 31 years. A dream that continues and grows, since it opened in 2017 Kiste, an easy and chic bistro in the center of Taormina, all & #8217; Renaissance-style building, that is also a national monument. In love with his territory, the chef is eclectic and has also launched a customized line called “I Peter D & #8217; Augustine”, which collects production of small local companies: extravirgin olive varieties Nocellara of d & #8217; & #8217; Etna, Wine Zibibbo of Pantelleria, Honey of Zafferana, ancient grains Sicilian pasta, pomodorino siccagno, the capers of the smaller.


Along to the chef, in room and in the kitchen, a brigade made up of 12 boys, all very young, that struck me please, Preparation, precision. The restaurant is small and bright, with large windows overlooking the sea and, here, as in the dishes, everything tells Sicily: solid oak tables, refined majolica of Scicli, pottery made by Peppino Lopez (Potter of Ragusa). La Capinera is mainly a seafood restaurant, with locally caught fish, although there is also a small and careful selection of dishes for meat lovers. The proposal includes two tasting menus: the first (profumo di mare) consists of six courses at 75 €; the second (land of flavours) composed of at least nine-course chosen freely by the chef, at a price of 90 euro. A value for money, considering the Michelin star, very affordable. To the paper, appetizers ranging from 23 € of roasted vegetables with cheese fondue Sicilians to 32 Euros of raw fish tasting. Just six starters, from 23 to 27 euro. There are five seconds (three fish and two of meat) all at 27 euro but mixed lot of fish and shellfish to 32 €. In the à la carte menu, there is also a selection of cheeses and fruit compotes (a 18 euro). Dessert between 14:15 EUR, while it is 27 Euros the cost of great tasting, chef's scribbles, for two people.

Room service is punctual and courteous, caring and attentive but not patronizing, and you can immediately breathe the natural sympathy of his Sicilian (I do not say this because I'm Sicilian, I try to be more objective). The chef offers a glass of wine Zibibbo of Pantelleria, selecting Peter d & #8217; Augustine, then comes to the table with the bread of Sicilian ancient grains flours Tumminia, Mallorca and Russello, Waffles with salt & #8217; island of Mozia and the focaccia with tomatoes of Pachino. All accompanied by & #8217; organic extra virgin olive oil “Cave Smoked”, of Mario Cutuli, of Randazzo. The chef's welcome is a cornucopia, mixed with Marsala wine cellars De Bartoli (the famous old wine “Samperi” the twentieth anniversary) and stuffed with a cream of grouper, potatoes of Giarre, fennel and beets. The taste of Marsala in brisè the cornucopia was evident and able to balance the fattiness of the filling, delicately flavored with fennel. 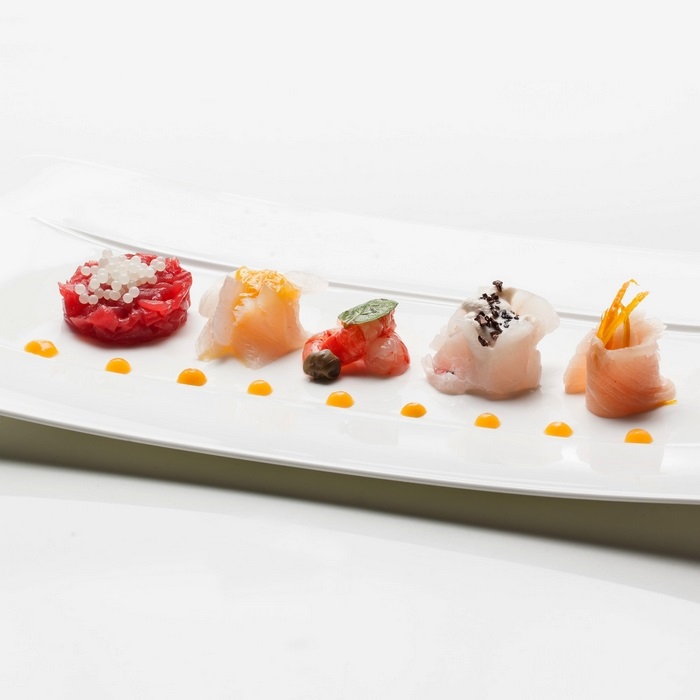 The three starters are served in succession, from the most delicate to the most robust. For first, Obviously, the raw fish composed a carpaccio of grouper, swordfish, Mazara del Vallo red prawn, squid and tuna. All topped off with an olive oil extra virgin olive oil (Biancolilla), lime, Peppermint, accompanied by a novel Orange cream and smoked salt of Motya. A dish that lives between the freshness of the ingredients and the quality of pairings, played on until the acidity and freshness of lime and orange. 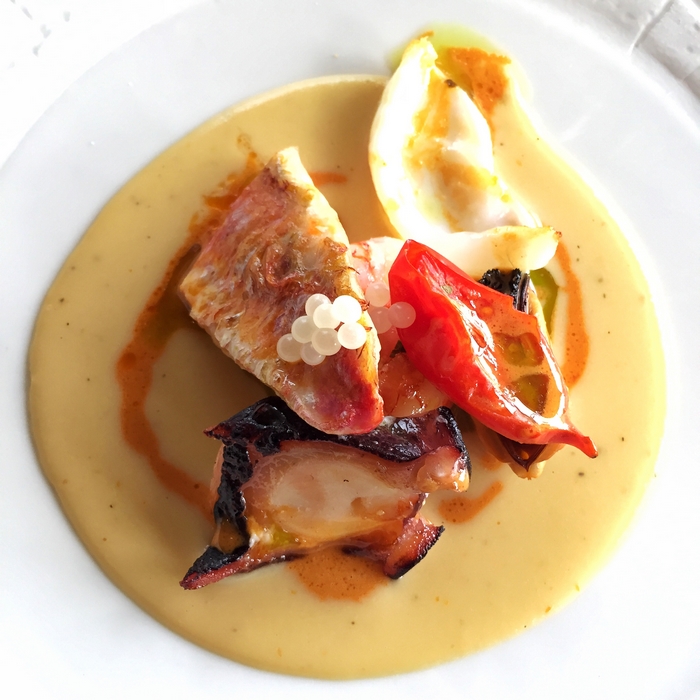 As the second Starter, here's a warm salad of red mullet, cuttlefish, mussels, Octopus in Aci Trezza and a red lobster ravioli, stuffed with buffalo ricotta Ragusa, served on a puree of chickpeas Leonforte, with sea urchin, snail eggs and a Basil oil and pistachio. A matching, one between the chickpeas and the fish, that now belongs to the history of Italian cuisine, Here declined with various types of fish, just pan-seared, and with a touch of class: the Red prawns stuffed with ricotta. A triumph of sweetness all & #8217; a dish composed of savoury items. 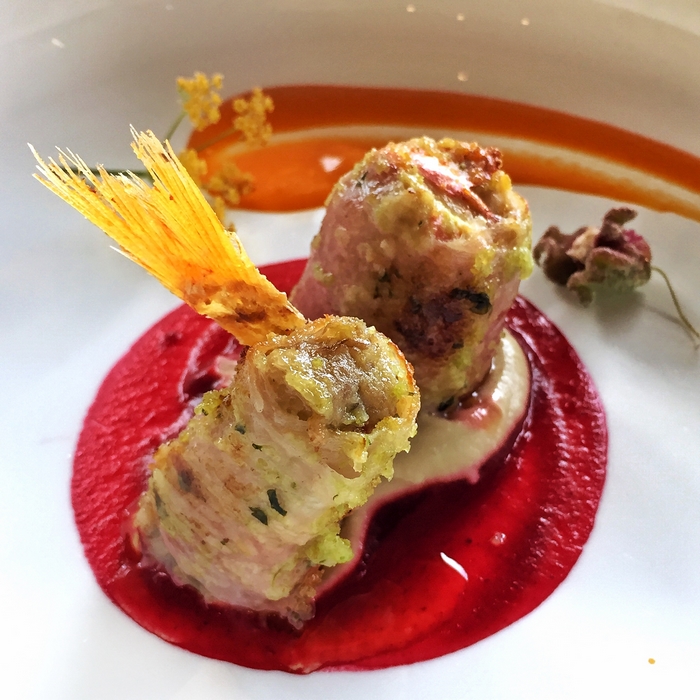 The third starter is a fascinating synthesis of flavors, where the chef's hand buy expressive power: Mullet larded with bacon of black pig Nebrodi, stuffed with mushroom soup and potato of Giarre, accompanied by Eggplant, cream of red beets, pepper cream and served with its crispy bone. All & #8217; explosion of colors on your plate, it accompanies a & #8217; explosion of flavours. None of the ingredients above the peculiar taste of red mullet, but all of exalt. In this dish is evident the great chef D'Agostino job to get the right balance between the ingredients. 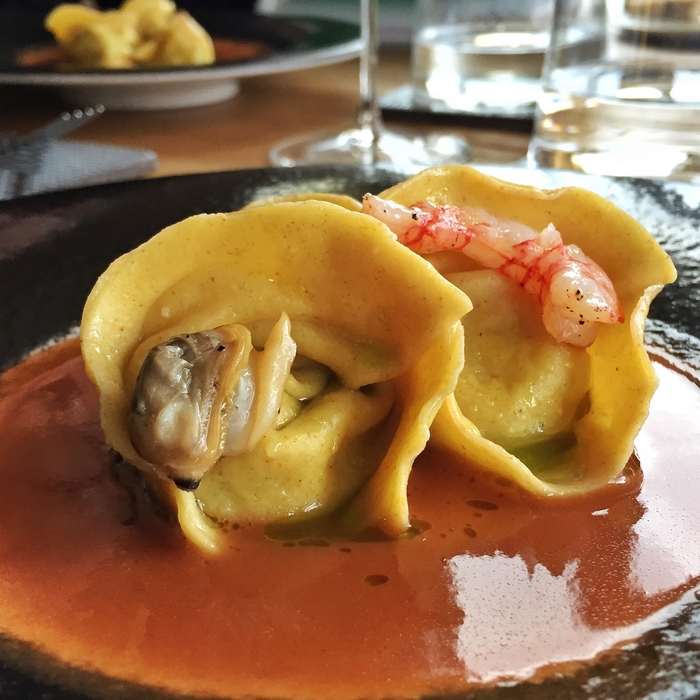 The first dish is delicate and tasty together: delicate agnolotti of grouper and fennel with mussels, clams and shrimp, served on a tasty shellfish bisque with basil oil. One of the best bisque I have tasted: creamy, intense flavor, unsalted, elegant. 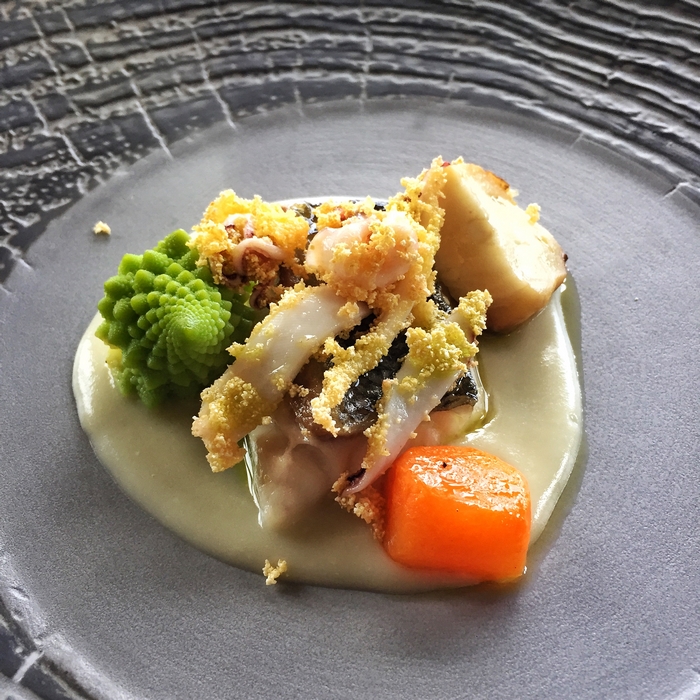 The second dish is a soft slice of red snapper, cooked at low temperature, accompanied by Golden cuttlefish with cous cous, Grilled Eggplant, Crispy vegetables (squash and broccoli romanesco left natural) cream of fennel. The dish is served covered with a cloche because inside there is smoke: the chef has chosen to give a special note to the dish with a smoky coffee, arabica mixture. Persistent note of tobacco smoke from pot given to coffee #8217 &;: the result, however, surprisingly gently on the fish fillet, while it remains somewhat cumbersome on vegetables. 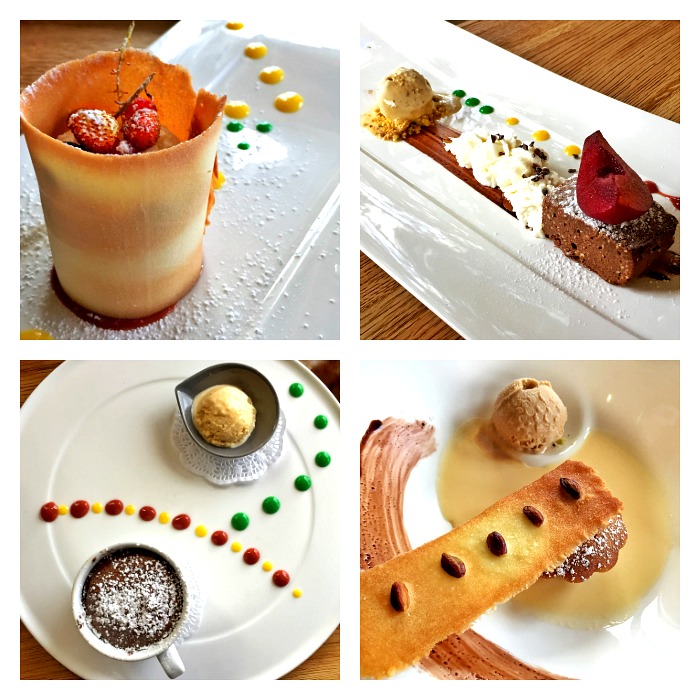 The end of the meal is a feast of sweetness, as one would expect in Sicily: Chef Pietro D'Agostino has prepared for the four of us sweets, all representative of the great Sicilian raw: ricotta, Pistachio, spinel father, oranges of Ribera, Chocolate of Modica, Hazelnut Nebrodi. It begins na fresh frozen orange mousse, contained in a waffle crisp and served with a strawberry sauce of Maletto (town in the province of Catania), Orange cream and Mint. A sweet Gourmand, rich and fresh. The second cake is rich and sumptuous: a chocolate brownie Modica, with Sicilian dried fruit inside, accompanied by a spinella pear cooked in wine district Etna Nerello Mascalese, served with a cream cheese, Nebrodi crunchy hazelnut and licorice ice cream Calabria. Yet, a warm chocolate soufflé, with tobacco ice cream. And finally the fourth sweet: a Bronte pistachio cake and ice cream with hazelnuts Sinagra, with Marsala wine sauce. Four sweet differently represent the essence of Sicily, some’ Baroque but that does not deny its rural tradition.

the meager wine list, essential, well chosen, mainly composed of white Sicilian brands, with some brand products “I Peter d'Agostino”. Good selection of bubbles. Do not miss the great red, given the many international guests attended the local, always looking for great wines. Recharge satisfactory for the content of the restaurant.

It ends with pastries served in balance on a rolling pin and coffee. And what remains in my mind, Besides the beauty and goodness of the dishes tasted, are the character and great empathy of this brilliant chef, who had the courage to return to Sicily to pay homage to his land.

Reviews: Buatta, the dishes of one...

Reviews: from Plan B to Syracuse...