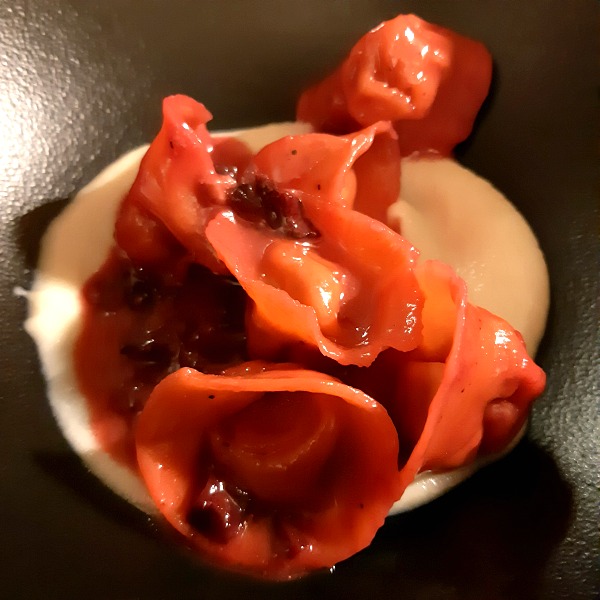 The ancient village of Montepagano is one of those places that will remain in the heart. For her beauty, for its tranquility, for its views overlooking the Adriatic Sea. Is’ one of those places that leave their mark and make remember, thanks to architectural and cultural recovery projects that should be an example for many wonderful and often abandoned Italian villages. Especially if these ideas do not come from investors and foreign capital, as is often the case, but by enlightened local entrepreneurs like Nuccia De Angelis, originally from Roseto degli Abruzzi, and creator with her husband (Alexander Brown) of “Dan Europe foundation” (organization without active-profit organization in the diving industry). Nuccia De Angelis, love of his land, he chose to get this village in Abruzzo, by creating a hotel and a popular restaurant, the D.One. His idea was realized in 2015 with the recovery of a diffuse structure in the historic center of Montepagano, made in the Middle Ages, contamination with seventeenth-century and today perfectly restored, a modern style while maintaining the austere beauty of the whole. 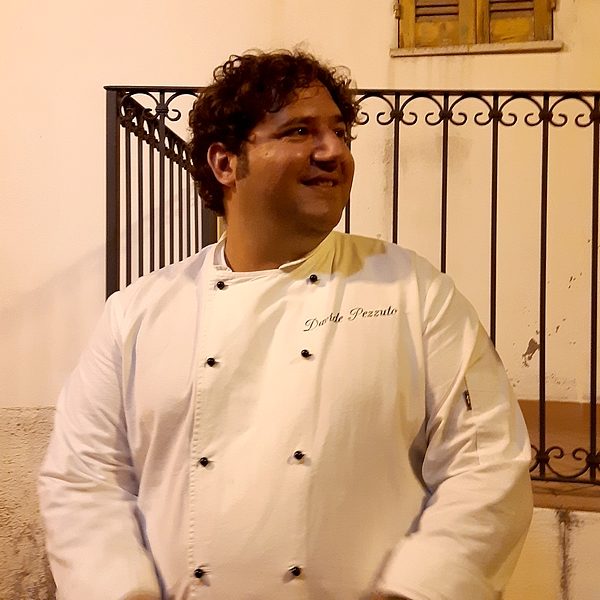 The D.One today is a multi-functional structure with five rooms, a haute cuisine restaurant with 35 seats, a room for two (for the most romantic dinner of your life, with road, sofa and butler included), various rooms for events, one of which sea. The gastronomic restaurant is run by chef David Pezzuto, Salento, class 1980. Pezzuto is an expert cook who has a long experience: He worked to Rossellinis Ravello, all'Abac Barcelona, coffee Les Paillottes Pescara, before arriving at the Pergola in Rome, chef Heinz Beck with, in the role of sous chef. Here in Montepagano Pezzuto he has won a Michelin star, while Nuccia De Angelis was rewarded in 2018 by the Gambero Rosso as a restaurateur of the year. Pezzuto, that manages to bring together the Salento and Mediterranean origins with excellent Abruzzo raw materials, personal care of the farm of 20 hectares, made available to the restaurant. 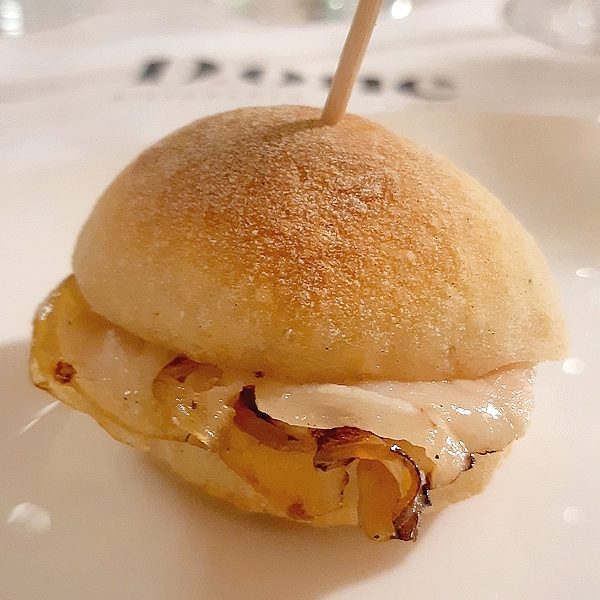 The D.One (One Degusto) It offers three tasting menus: a traditional menu of 5 courses 65 €; a seafood menu, 7-course at 80 € and menu called “Chaos”, with 10 courses to 105 euro, chef's scribbles. We have been lucky enough to dine at D.One during a good initiative of the Consortium Hills Teramane DOCG, who wanted to create a gastronomic journey of food and wine in a special evening with nine of the chef Pezzutto matched tasting 18 wine labels: a clear path between the earth and the sea in the interpretation of the chef. 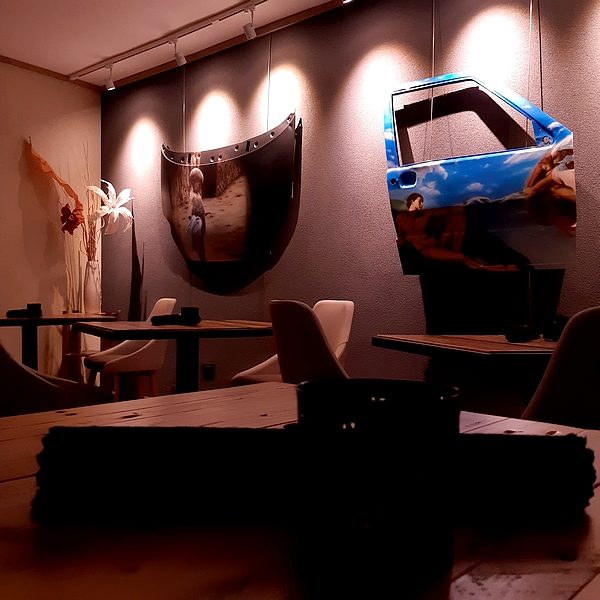 The bread, Homemade sourdough, Senator Cappelli flour, Solina and toasted malt flour, It is served with extra virgin olive oil of Abruzzo cultivars Tortiglione, derived from the 3 thousand trees of the restaurant held D.One. welcome chef is a miniature version of what actually served as a main dish: the “porchetta really hot”, in the wake of the food tradition of this territory where road, in every corner, you can find the food truck selling porchetta, with the words “really hot”. 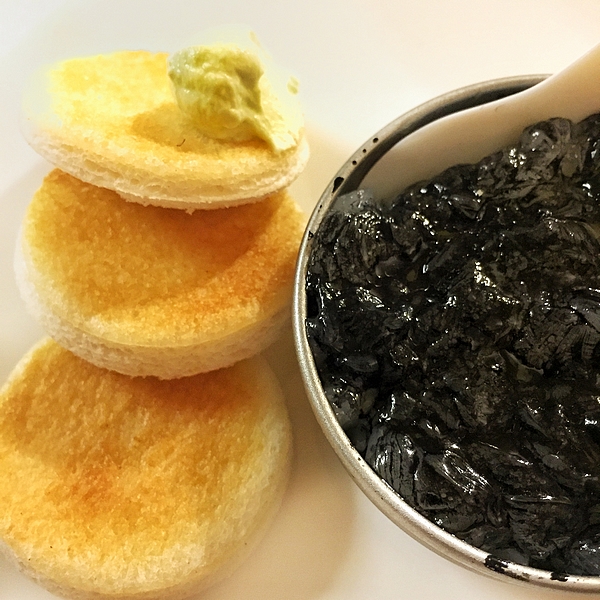 Then comes one of the symbol of Pezzuto dishes, the “Sea caviar service pressure”, or a tartare made with sea lettuce, amberjack tartare and shrimp, Salicornia and chopped squid ink, to simulate the deep black and translucent caviar, It served right in the typical tins of caviar tin. Accompanied by crostini with sour cream plankton. A saline dish, cool, in which fully expresses the creative imagination of the chef Davide Pezzuto, that makes a minimalist kitchen and always measured. 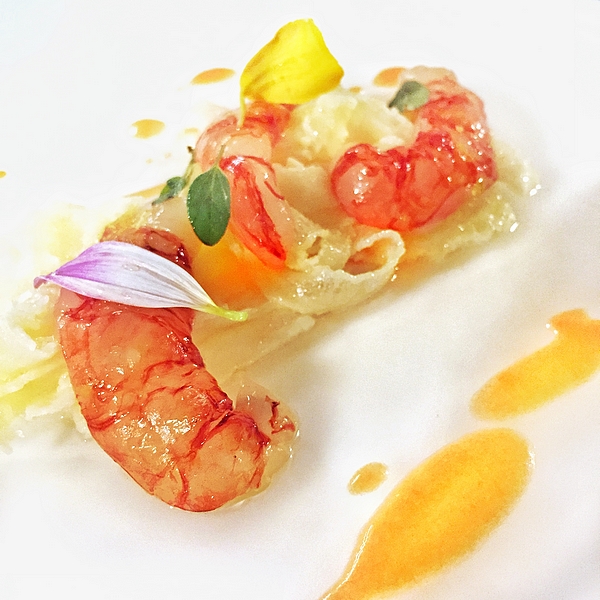 The propensity of Pezzuto for a cookery made with few ingredients can also be seen clearly from tripe Teramo with prawns. Tripe is a tribute to the famous “tripe Penne” from marjoram. Here tripe has been the leader: purchased already treated and blanched, It is then subjected to a new brewing process with odors and then, When the texture becomes soft and the faint taste, sliced ​​thin. Then, It is served with red raw shrimp and local, even in this case, a discreet marjoram and olive oil. And if the kitchen, with his young staff, He works with great precision, the hall is not far behind: driving there from Gabriel Thompson, former sommelier at Enoteca Pinchiorri in Florence, Also experiences with the restaurant “The other Visscher”. The service is very accurate and discreet, highly professional but without being intimidating to the customer. 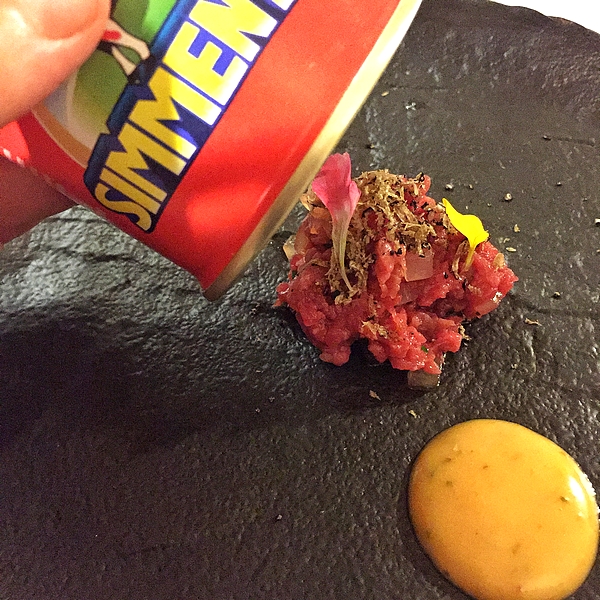 The farm of D.One is conducted in organic farming. In the kitchen, the products actually reach zero kilometer. This is also why the chef wanted a restaurant with just 35 seats. Agricultural products match small treats and culinary excellence, such as basil grown in underwater biospheres (to 10 meters deep), or the plant plankton, which are widely used in the kitchen of chef Pezzuto. Among the games that are offered in the menu there is a fun and simple dish: “Simmenthal in Montepagano”, or a tartare Culaccia hidden inside a scatoleta meat “Simmenthal”, accompanied by a thin veal jelly brunoise. 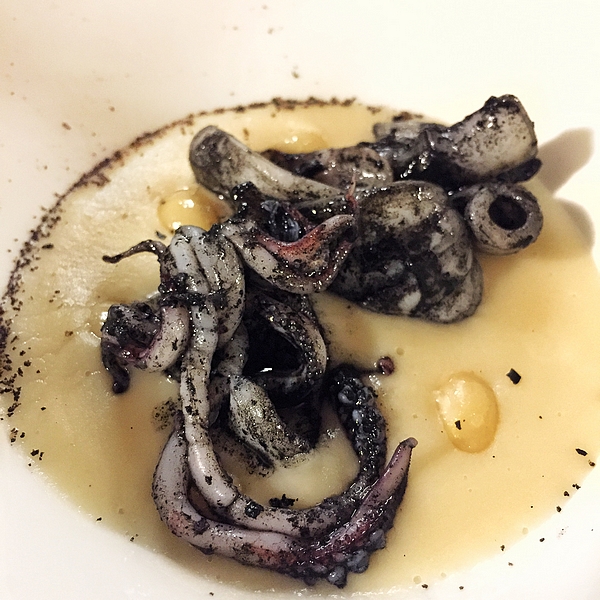 The D.One is not only a place of haute cuisine but it is also a space for artwork, temporarily housed within the premises: paintings, sculptures, lamps. The restaurant also has a cocktail corner of author and mixed drinks, edited by the bartender Domenico Michele Celozzi. The first dish jokes on the topic of maltagliati. Here the traditional maltagliati are not made of flour and water, I'm not a classic pasta, but I am “caciaroli”, or small squid coarsely chopped (maltagliati, precisely), served on a cream of fresh cannellini beans Tavo and an interesting aroma of burned nutmeg. 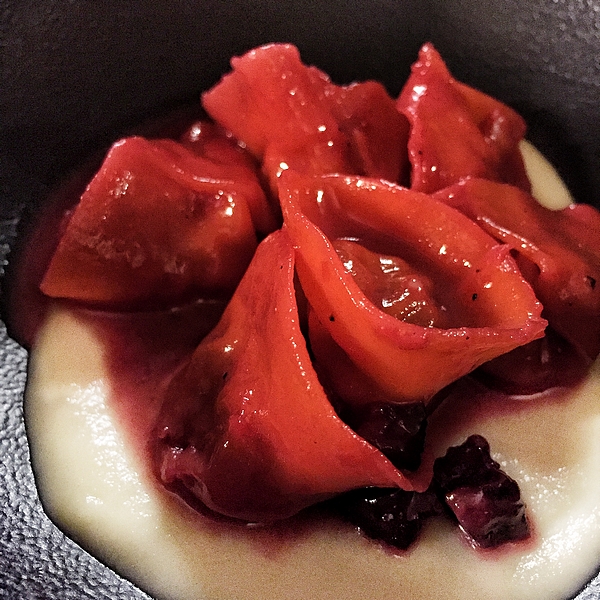 To follow, a substance dish: tortelli with red turnip with duck filling wetsuit, Jerusalem artichoke cream and beetroot. A simply delicious dish, with fatty notes pleasant and well calibrated, slightly sour aftertaste and almost fermented turnips. Beyond the fresh pasta, the dry is carried out for the D.One restaurant by an artisan pasta Pratola Peligna (L'Aquila), with the grain of the type Senatore Cappelli, grown in organic farm and restaurant milled in stone houses Molino. 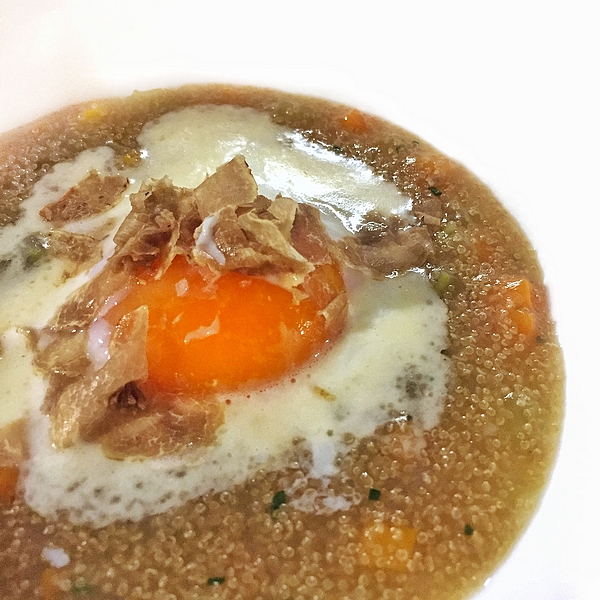 In David's menu Pezzuto, there is always a flow of eggs. The reason is obvious: among the many initiatives of the D.One staff it is also to retrieve the breeding of some native birds, such as Atri black hen, almost extinct animal that was rediscovered in the badlands of Atri. The oasis of the WWF launched a recovery program of the breed in collaboration with local families and the eggs of this hen, very small eggs and very tasty yolk, It is perfect in the notes of the modern kitchen. The chef in the paper hen's egg in Purgatory (with pecorino fondue Farindola, puree of red peppers and liquorice). Focusing on autumn ingredients, He served egg soup with amaranth from earthy hint, with crispy potatoes and white truffle Abruzzo. Intense taste, simple and complex set. 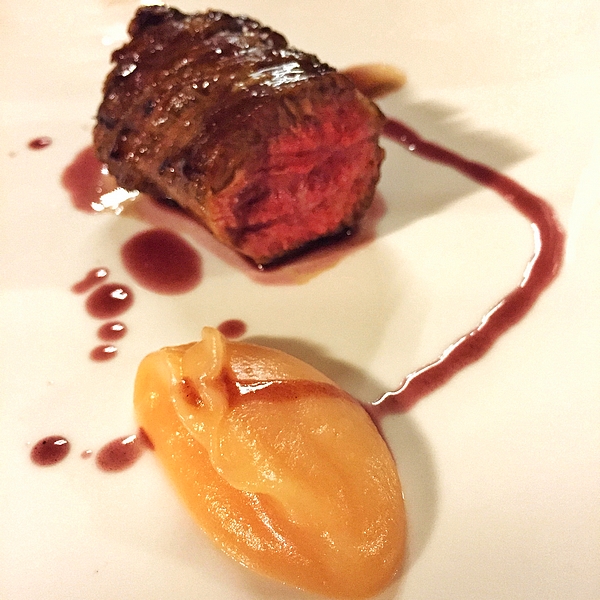 Before the sweet comes the loin of mutton Abruzzo, nugget of liquorice in Atri, apple quince puree and a magnificent bordelaise sauce, realized with the ratafia of cherries and flavored with wild fennel. The lamb is one of the glories of Abruzzo, but perhaps few know that since the Middle Ages licorice Atri was famous, because the plants grew wild licorice and production had been undertaken by the Dominican friars. In the early nineteenth century it has come to an industrial production of licorice. Today the Italian Abruzzo is the second producing region, after Calabria. In this second plate, there is all the elegance and the passion that really quell'Abruzzo, Also in the kitchen, It can be defined “strong and gentle”. 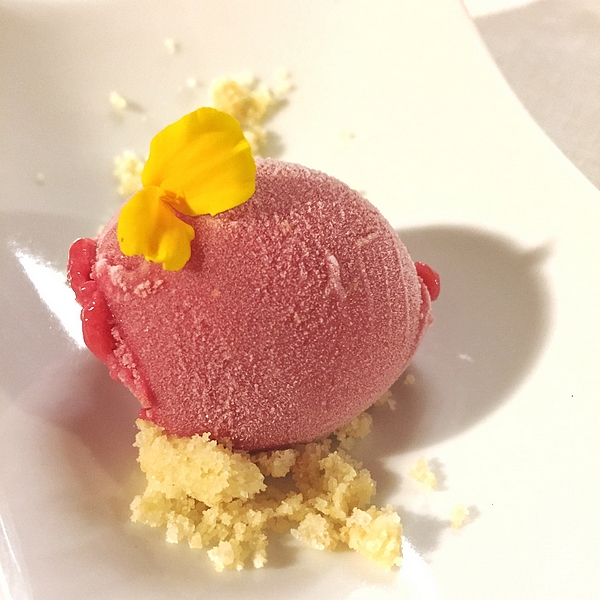 Small predessert with a raspberry sorbet by pronounced acidity (and welcome), burrosissimo and served with a savory crumble, who has prepared a nice cake served dinner to close. 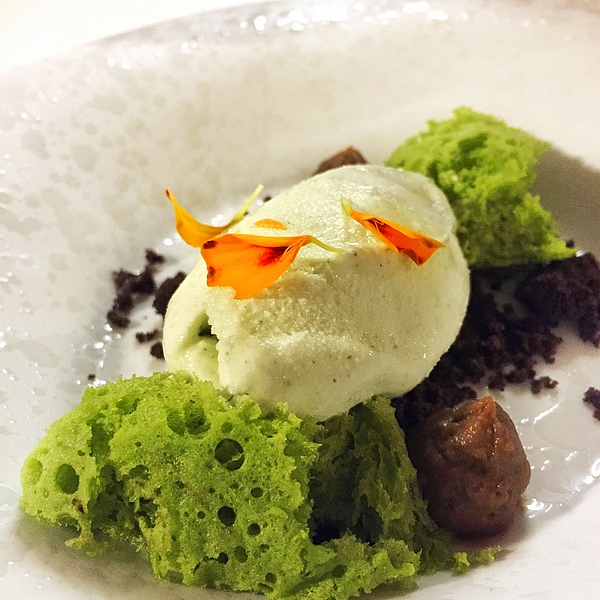 The cake can be really defined as the Abruzzo in the dish: It's called “the land of gullies” and it is dedicated to the Teramane Hills area, full of hillsides with clay formations in an advanced state of erosion, where they grow herbs like mint and licorice. The chef Davide Pezzuto interpreted his adopted land, Abruzzo, proposing a mold with chocolate pistachio sponge, chocolate sauce, wild mint ice cream and liquorice. A feast of taste and freshness, where even the intense notes of licorice has found its rightful place without being cumbersome.

The small pastry is made chocolates with white chocolate and creamy hazelnut and dark chocolate cups with 60% ratafià. With these delights it is mandatory to taste “special coffee”, a spicy aromatic liquid with cardamom, cinnamon, bearish, served in cups similar to pagodas, with crystals for her and for him all golden, chosen personally by Nuccia, who has an obsessive attention to detail and a keen gracefully, that fits perfectly with the minimalist elegance and combinations measured and vibrant of chef David Pezzuto. Particular wine list that enhances especially those from Abruzzo, but there are also divers wines, wine in amphorae and beers brewed with water from the sea.