Opened in 2009 and awarded the Michelin star in 2014, the restaurant the puppets He was born in Bagheria, town at the gates of Palermo, Center in which modernity is to live with the splendour of the eighteenth century still witnessed by the splendour of the villas that were the residence of palermitani nobles. And right in the shadow of one of the most extraordinary of these villas, Villa Palagonia, that I recommend you visit to admire its imaginative monsters into stone, is the local chef Toni Lo Coco. Almost to counteract with the ostentatious luxury of the past, the restaurant is deliberately minimalist, small (about 25 seats), decorated with neutral tones of white, black and grey, with sharp lines and shiny surfaces. In the Hall, There is the wife of tones, Laura Codogno, who runs the service with iron wrist. In the kitchen, the chef plays on a precarious balance between respect for the great Sicilian folk traditions and his creative instinct that look to innovation and future. Personally, just in dishes that are inspired by the popular cuisine, enriched by the inspiration of the chef, I found the expression happier than Lo Coco. 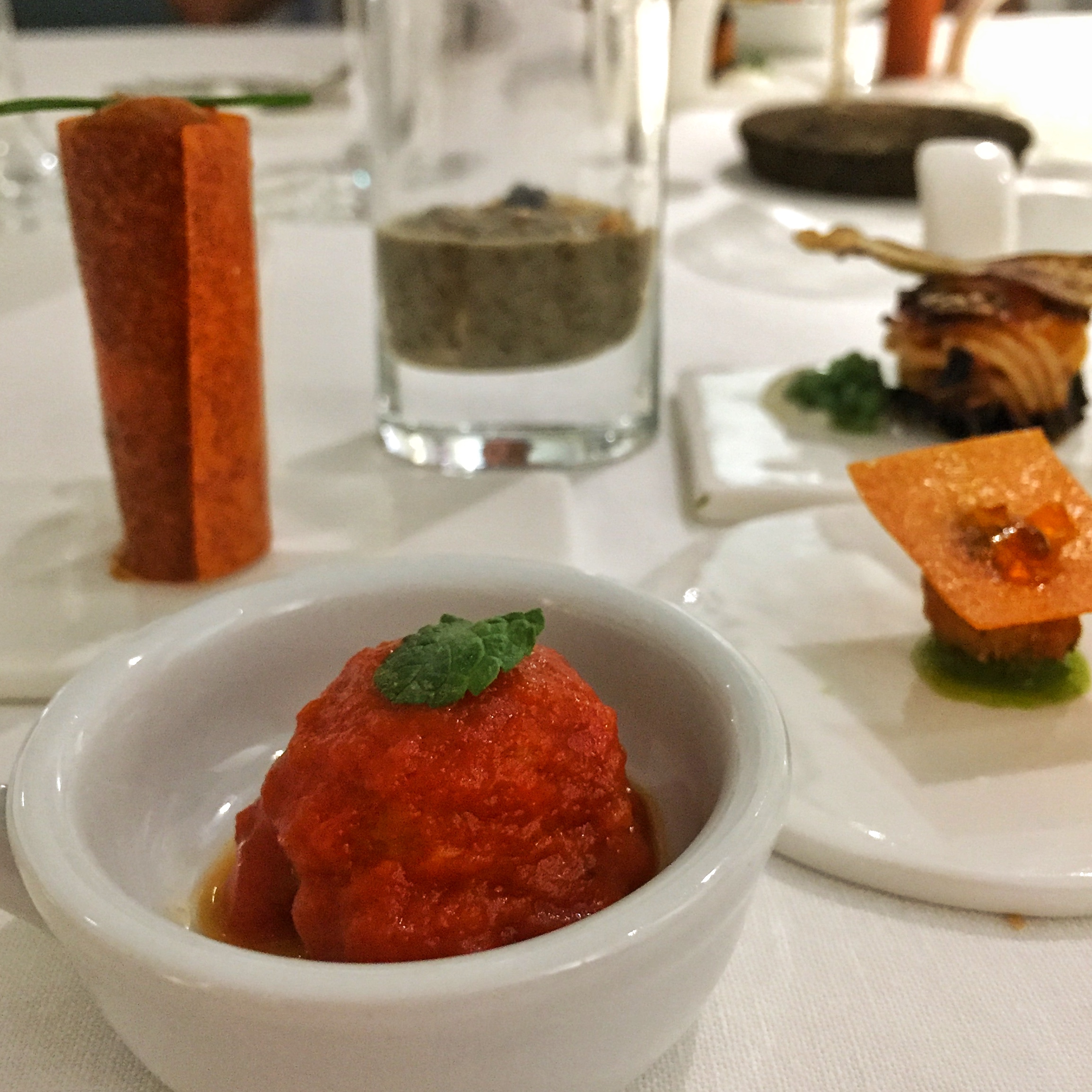 Four tasting menus of the restaurant the puppets, one of which is very convenient for those who want to eat at a high level but on a budget: the menu (available for lunch only) to 35 euro. At dinner, a six-course menu at 75 euros, one of seven courses at 85 euros, one of ten courses to 110 euros. To the paper, the appetizers offered by Tony Lo Coco range from 22 to 26 euros; main courses from 22 to 25 euro, the seconds are all 25 euro; the desserts at 10 euros. I chose the seven-course menu. The raw materials are mainly in Sicily. In the table come the bread with Sesame (the giuggiulena Sicilian) tomato Focaccia, the sheets of unleavened bread and breadsticks, all made with sourdough and ancient grains flour Sicilians (Tumminia, Russello and perciasacchi).

The Brut of the winery chef's welcome accompanying Cusumano: Parker of sardines in tomato sauce, the traditional Parmesan black honey arancina declined dei Nebrodi, the cream of lentils in Ustica Sicilian truffle, the crunchy waffle of peppers stuffed with cream of peppers and aubergines, the timballo of fried dough with parsley and pepper croquettes. Tantalizing flavours and consistencies games well balanced managed. 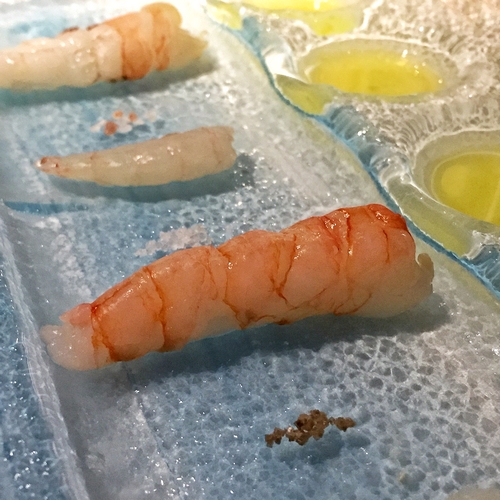 Then, We start with the first restaurant appetizer the puppets: a raw seven types of fish and shellfish combined with as many flavored oils at home chef, accompanied by different salts from around the world: some sort of keyboard with seven notes alternating between increasingly intense flavours and aromas. No escape, shrimp pot, Gambero rosso, redfish, John Dory, tuna and squid. Among the pairings, particularly intriguing combination that Toni Lo Coco creates with the tuna with a smoked oil carob. The perfect bite? The julienned squid with a smoked oil to ashes, accompanied by Hawaiian black salt. 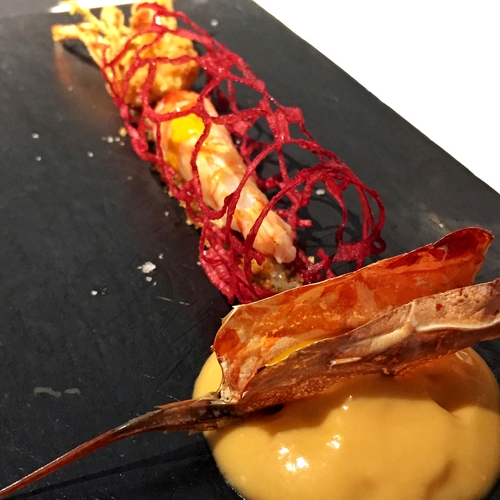 Interesting and very technical the second proposal for a Starter, with a strong aesthetic impact: “The shrimp in its cage”, a grid made of potatoes and beetroot with a homemade mayonnaise shrimp eggs (too delicate), a habanero sauce (spicy but not too) and a slight ginger breadcrumbs. 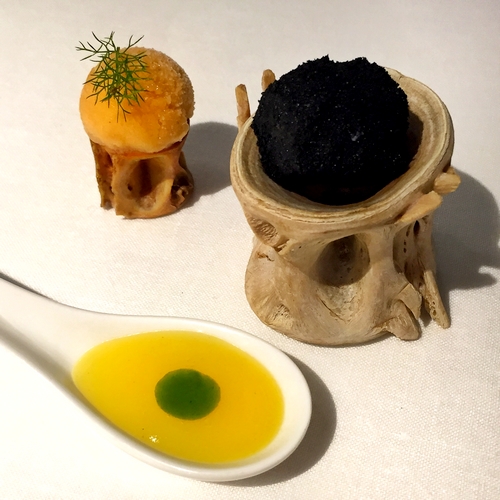 Less successful third Starter: “Bon bon with Ciaculli late and cream sauce with sea urchin”. A praline with riccio raw inside, served on a potato cream flavored, with essence of Ciaculli late Mandarin and accompanied by a sea urchin ice cream with wild fennel. In the collection, In addition to the textures that I couldn't appreciate, I'm experiencing an excess of sweetness and mushy on the palate sensations. 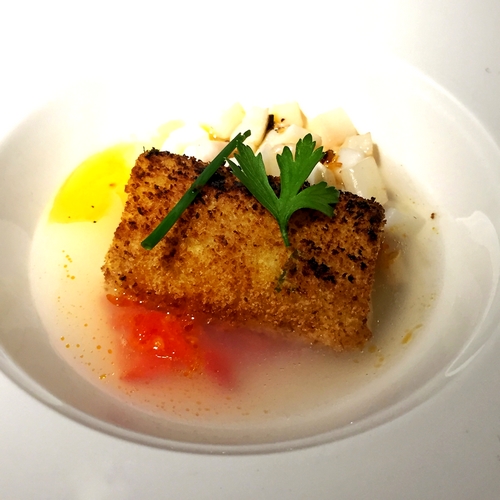 The “risotto with seafood today” chef Toni is unusual in a reinterpreted "Lo Coco, between Sicily and the future: becomes a sort of cylinder shaped Danny Rice, leaned over a seafood broth and served with a brunoise of mussels, shrimp and squid. Risotto ingredients are all there, the flavors come closer to a classic risotto ai frutti di mare and the texture is a nice game in the crust of rice broth-soaked arancina. Perhaps an excess of salt due to the concentration of flavors. 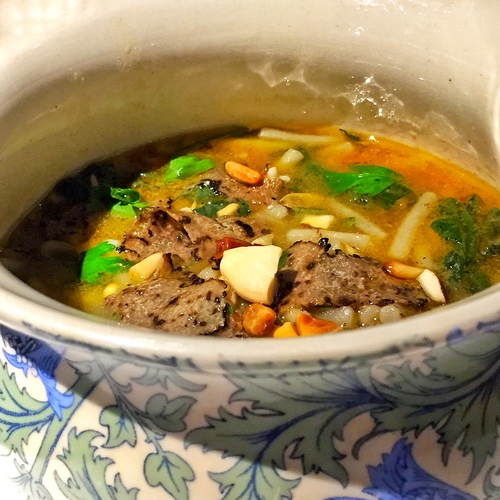 In my opinion the best dishes of the restaurant the puppets, Spaghetti broken into soup of shellfish and tenerumi of ' Chaitanya longa ', the zucchini snake, with dried fruit and summer truffle. The dish is a tribute from the perfect balance to the Sicilian tradition that has in the soup with tenerumi one of his boasts: the addition of crustaceans and truffles ennoble the dish without changing the essence, dried fruit makes a simple and pleasant crispiness. The smell of the soup is already an excellent omen to the taste of the dish, presented within an ancient pottery from foggia and colours. As I mentioned, I find that the hand of chef Toni Lo Coco's especially happy when builds his dishes by weaving the Web of fantasy based on strong traditions. 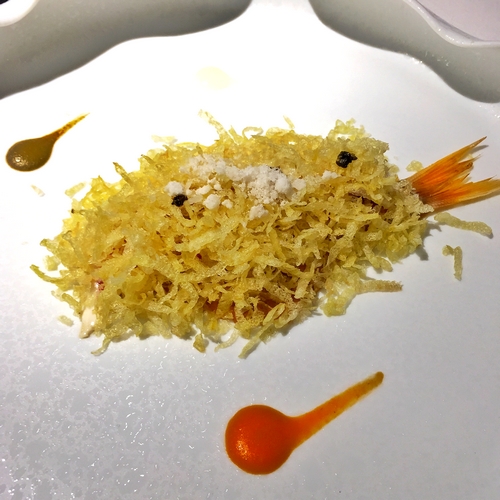 For nothing convincing, instead, the main course: mullet cooked at a low temperature ' ammucciata ', or hidden, under a cloud’ of French fries, lying on a sauce of tomato and topped by an ice-blended ' Canary ', a famous Sicilian water herbal tea, Laurel and lemon zest, with cream and capers of Salina. Nothing to say about cooking goatfish, perfect, soft, succulent, intense flavor, Unfortunately not enhanced by too much and the unctuousness of potatoes. N taste evanescent of granita (Too bad, Ideally was the mullet and the ' Canary’ a perfect match), slightly cumbersome concentrated sauce. You can do better. A little’ of disappointment at the absence in a seven-course tasting menu such as (that should contain the iconic dishes of the chef), a dish that I heard so much: the stigghiola of tuna, Here also a tribute to the Sicilian street food. Maybe next time. 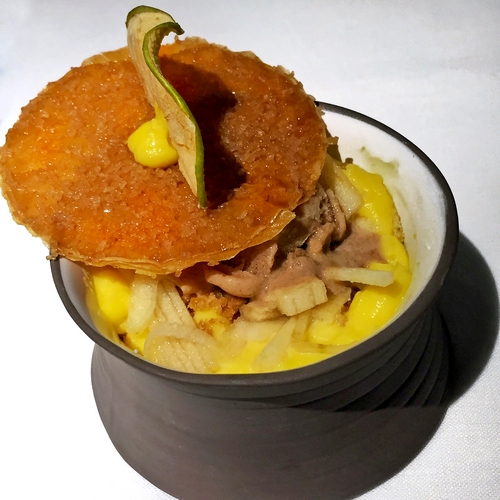 Simple and cool the pre dessert: confit salad with vanilla sauce and dried fruit. Good but perhaps not suitable to the climate (decidedly summer) the sweet: a review on Apple strudel cocotte, made with ricotta cream, raw apples and ginger. A dessert that I ate in winter but in summer. Having regard to the careful work on Sicilian tradition, I would have expected a cool variation on the theme of jasmine, water melon, scorsonera ice cream.

Wine suitable for the local level, with prevalence of whites and sparkling wines. Good selection of Sicilian wines. Overnight in standard.

Reviews: in Palermo the Mediterranean style...