Reviews: Chiaroscuro, Barbagia Marina Ravarotto in the heart of Cagliari

Marina Ravarotto has the merit of having brought to Cagliari, seaside town, the flavors of its Barbagia, inside area of ​​Sardinia with centuries of tradition, and to have revived these flavors in a modern and interesting, based on carefully selected ingredients. Thirty-seven years, student of Mario Tirotto (Resort Valle dell’Erica, that defines its “mentor”), and experiences both at the court of Robert Petza (S'Apposentu Casa Saba, Michelin star) both Stefano Deidda (Il Corsaro, Michelin star), This island chef has since started her own and now leads the brigade of ChiaroScuro. The restaurant has a few months to live, It opened its doors in December 2017 and is located along the Corso Vittorio Emanuele, one of the busiest streets in Cagliari. The Ravarotto thus becomes part of the team risicatissima female Sardinian cuisine, whose ranks we hope to see more and more crowded. 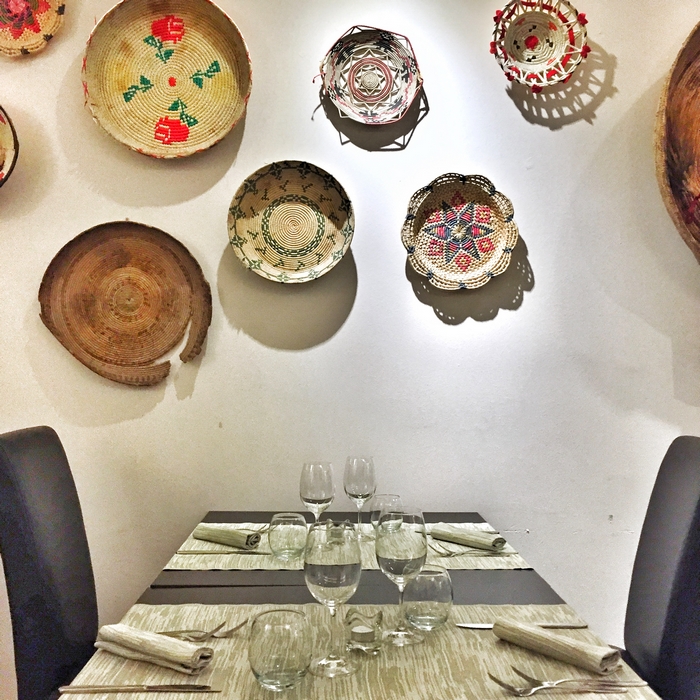 The local, Chiaroscuro, It takes its name from the title of the book by Grazia Deledda (Nuoro, Nobel Prize for Literature in 1926) and Deledda is present, with phrases and the silhouette in transparency, around the menu. Chiaroscuro is a spartan restaurant, long and narrow like all clubs that overlook Corso Vittorio Emanuele. Walls on white tones punctuated by baskets, farm implements, copper scales and valuable traditional fabrics. quiet Environment, with well spaced tables, divided into two rooms separated by a few steps. In the kitchen (not to view), Marina Ravarotto working in the brigade with three colleagues. The idea of ​​becoming a chef, Marina tells the same in the preface to the menu, born youth, cook seeing his mother and grandmothers who have transmitted the passion of the kitchen. Then years of training, made predominantly in Sardinia. 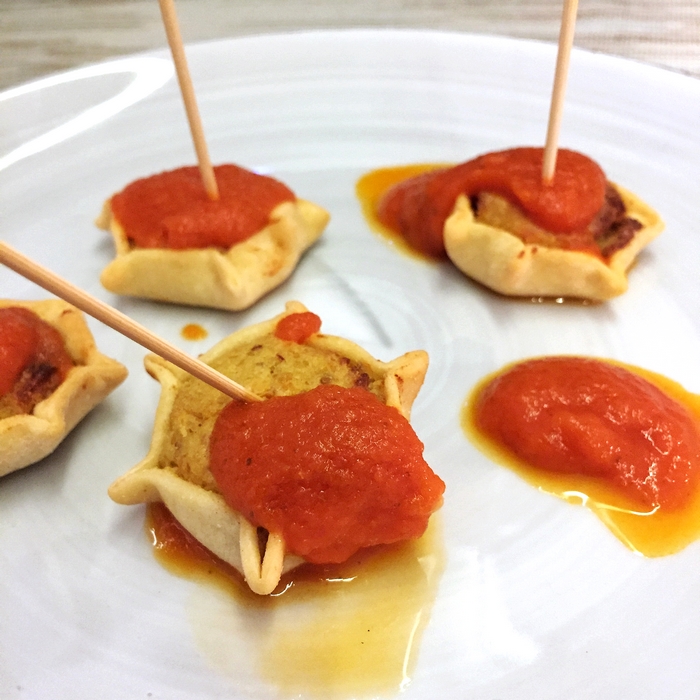 Welcome chef are stuffed with purpuzza pardulas, accompanied by tomato sauce. tasty Stuzzichino, He deserved a more polished impiattamento. The menu of ChiaroScuro restaurant is built with the idea of ​​enhancing the products of the Barbagia tradition and is to be awarded the decision – in a seaside town – not to have succumbed to the logic of 'fish dish in paper'. Unfortunately, it is not expected a tasting menu, as in all the major restaurants in Sardinia, where chefs will “represent” a menu that tells them. From a young chef who wants to present their own path in Cagliari, transmitting the essential concepts of the culinary tradition barbaricina interpreted in a personal, we would have expected a tasting journey and look forward to the next visit there is.

In paper, entrees range from 8 to 16 euro: among those barbaricini fresh tomato salad the typology “camone” accompanied with cheese “early” (8 euro), fried sweetbreads (10 euro), The wild boar terrine (11 euros). We opted for the more comprehensive, The Tradition, plenty enough for two people: a nice selection of high-quality cold cuts of salami and cheese Chessa of Orune company Demurtas Castiadas, served on a cork cutting board. Always nell'antipasto Tradition, good snails with tomato sauce just spicy, the frue cheese with almond gattò (a simple but tasty combination), the traditional “purpuzza” (pork meat cut with a knife, marinated and cooked in wine), the tongue (well cooked and soft), served with an inspired and fresh pear compote, ginger and pink pepper. 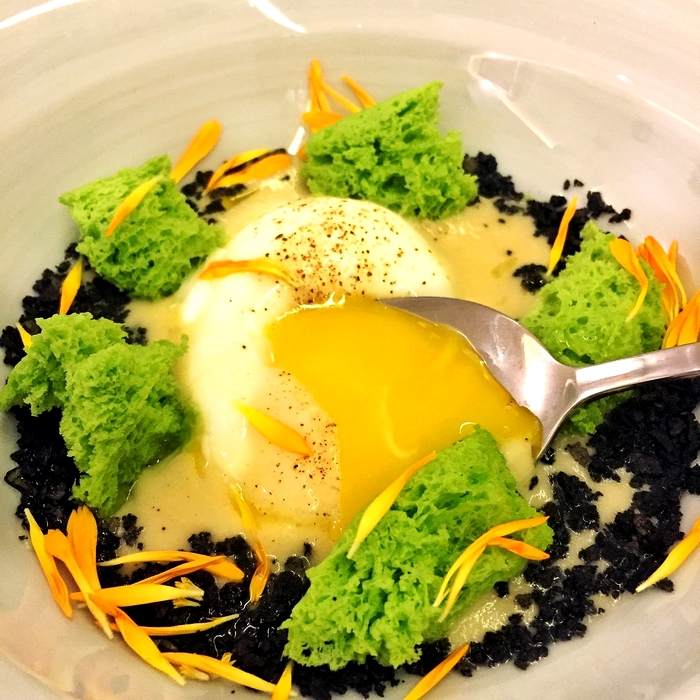 Among the starters, even some creative proposal: egg in green. An egg served on cream of Jerusalem artichokes, accompanied by a sponge parsley and bread carasau to charcoal. A very well executed impiattamento, a plate with a modern design and balanced flavor. The only flaw, the carasau bread crumbs had got damp and had softened, losing crispness. 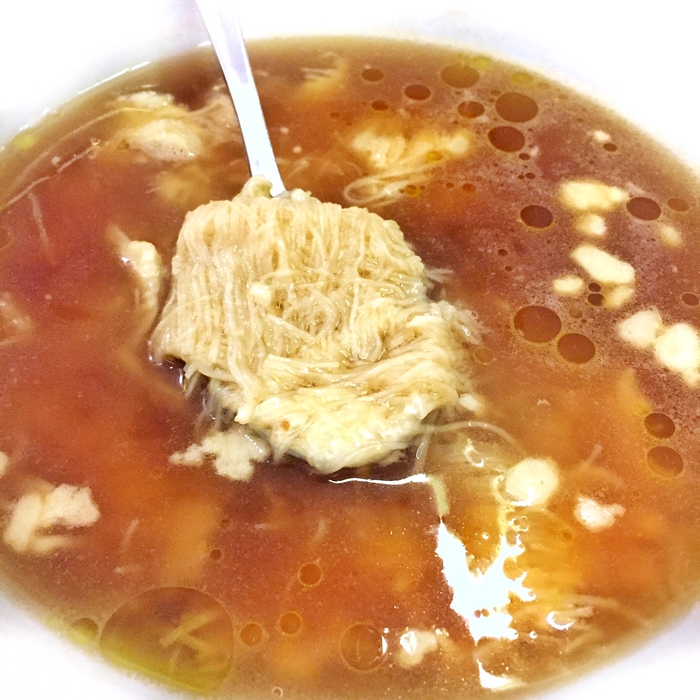 Among the first courses (8-15 euro), dominate barbaricini tastes. Fresh pasta is handmade daily, like bread and breadsticks. They range from the classic “Frattau bread” (9 euro) to maccarrones de busa with ragu sheep (13 euros) to the famous “filindeu” (15 euros). The “filindeu” It is a typical pasta nuorese, very rare, made with semolina flour, water and salt, unique for the preparation mode. Is’ composed of thin strands of pasta, arranged in a network form. The recipe is guarded by three women of Nuoro and is handed down for centuries. The name “filindeu” it means “threads of God”: This pasta is offered in a mutton broth to the faithful every year, In october, They run along the pilgrimage route from the town of Nuoro to the sanctuary of San Francesco in Lula. Marina's Rott, very attached to this tradition, He wanted to include this recipe in its menu, performing well a traditional dish. The filindeu but come directly from Nuoro, compared to the traditional recipe, sheep broth was degreased because its strong flavor could not meet the wishes of the customer and the overall taste of the dish (for those who know and love just the intensity of this dish), It proved too delicate. Great frattau bread, served piping hot, with the right amount of tomato sauce and cheese and a poached egg, cooked to perfection, with soft yolk and the egg white at the right point of coagulation. One of the best tasted in Sardinia. 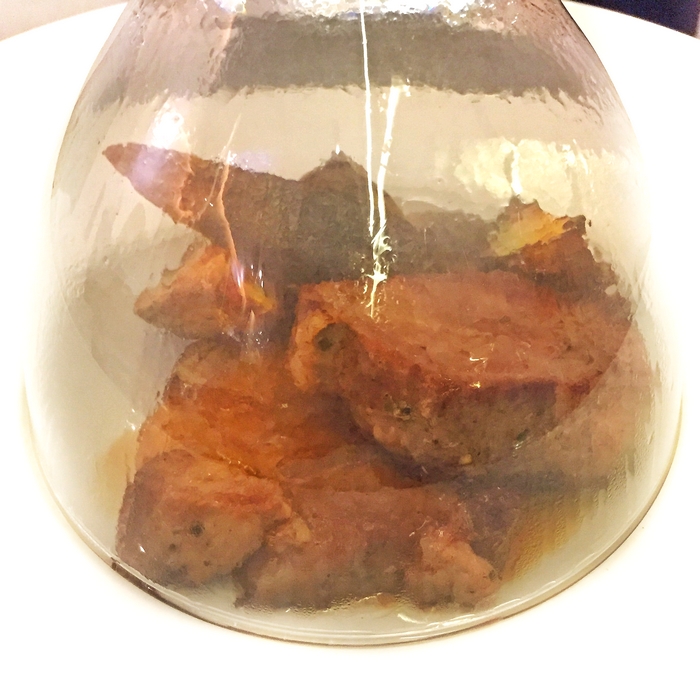 Great attention to the so-called “fifth quarter” around the menu, from appetizers to main dishes (between 11 and 15 €). The restaurant offers ChiaroScuro “tratalia” (entrails of lamb wrapped in the omentum) accompanied by braised onions; suckling pig stew and roast suckling pig (on reservation); The beef cheek with chickpeas. And two dishes that depart from tradition but are reinterpreted: the cloud in capocollo and lamb four by four. We have chosen these dishes, to understand the creativity of the chef. The cloud in capocollo is a pork capocollo, accompanied by roasted potatoes, served covered for a few minutes a bell in which lurks a slight but persistent smoking. The 80-degree cooking for nine hours dissolved well collagen, leaving the meat perfectly tender and juicy, with the right amount of fat. Good roast potatoes, which, however, on the one hand it trivialized the dish, the other left the desire for something fresh and vegetable to accompany capocollo. 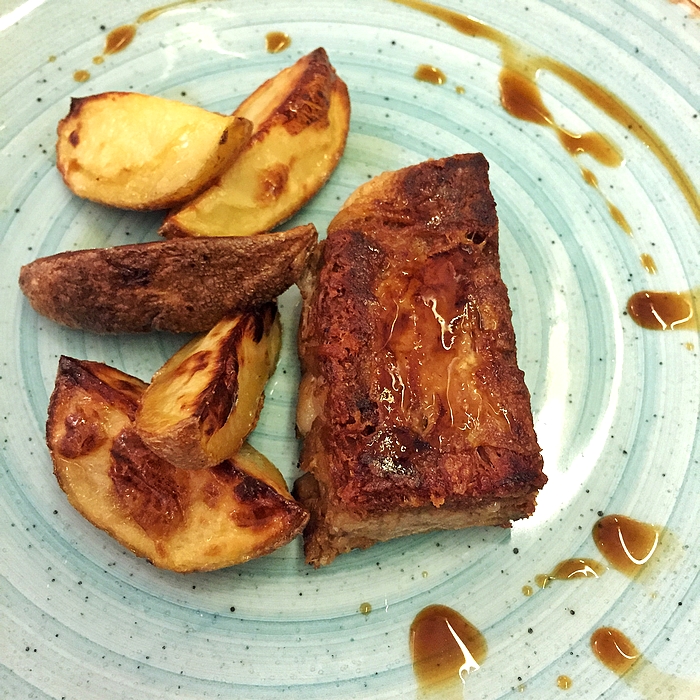 The lamb “four by four” a lamb is prepared in four different firings (boiled and degreased, Braised and rosticciato) and then mixture into a bowl. Excellent taste of meat, tender and served with its bottom, which maintained an important fat component and would have an absolute need of a strong acidity, to balance the taste. The fat component has been further reinforced by the greasiness of the potatoes in the oven. The dish, we were told, It was initially conceived with an accompaniment made from a yogurt sauce and mustard, a virtually perfect and refreshing combination. The recipe has been modified, We learned, after customer complaints that they did not like the acidity. A great sin, because we wanted to taste the dish as the chef had devised, that is well-balanced and motivated in its ingredients.

Sweets (tra i 5 e for 9 euros) They are traditional footprint: the seadas, the cake with warm chocolate heart (It becomes a dessert for all seasons and for all regions, such as tiramisu), the ever fresh soup of strawberries with lemon sorbet, a tantalizing mille-feuille carasau bread with eggnog myrtle (9 euro). Even the desserts are designed and prepared by the chef. We tried the coffee cream, mounted mascarpone, accompanied by berries, Sponge macaroons and alchechengi. A nice sweet, not too sweet, with a low acidity and a slight prevalence of fatty elements due to the creamy. A nice sweet that could further balance, with a focus on the main coffee role, hardly perceptible. At the end, pastries with a tasty nougat Tonara, a pineapple jelly and lime, mini gueffus, nunnata (meringues) and Hungarian biscuits.

The drinks menu, there are only Sardinian wines and some homemade Sardinian beer. Seven white wines, about thirty references of red wines and three dessert wines. The mark-ups on prices are honest. And ChiaroScuro you can drink very well with 22 euro. In the Hall, great courtesy and attention, with a sommelier-maitre which has proven accurate and timely, well informed about the dishes and able to serve the most demanding customers.

Reviews: Quality and balance. The challenge...

Reviews: pizzeria King-Mi in Sassari, the...

Reviews: Dal Corsaro, the inspiration and ...

All Sardinia is beautiful and luckily also the restaurants are growing!