The pizzeria was born in 8 may 2016 Civic, as the second step of the business venture of five young people, local owners in the Sardinian capital of Course 12. The five friends, who previously had never had experience in the world of entertainment, given the success of the first initiative, they wanted to add another piece to the puzzle, venturing into the field of pizzerias. Simplicity, immediacy and speed, are the local characteristics of Viale Regina Margherita, that the public is rewarding local flocking. Street number 8 is, In fact, a pizzeria (with kitchen) with a precise target, young people, which immediately entered into the good graces of Cagliari, even for a great value, especially looking at the excellent quality of the ingredients on the pizza. The setting is on two levels: a ground floor with mirrored panels with the counter at sight, and an upper floor with pastel coloured walls, colorful cushions, vintage atmosphere made eye-catching paintings that recall the names of the music of the 1970s and 1980s. This pizzeria, to two steps from the harbour of Cagliari, has about 50 seats. The pizza maker Simone Farina from his counter and his electric oven “Evolution” extracts pizzas which have as their basis two different types of dough: a first dough is traditional, with double zero flour (Molino Casillo), Brewer's yeast as a percentage of 1% of the total of the dough, a high hydration and matured for 48 hours; the second dough consists of wholemeal flour, has a minor and hydration is matured for 12 hours. 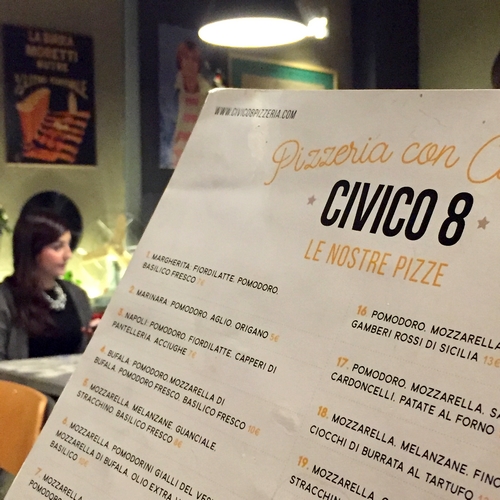 The Pats have a weight close to the minimum limits. Specifically, the stick of 190 weighs 8 grams Civic. To give an example, the specification of the Neapolitan pizza Tsg provides a minimum weight of 180 and up to 250. This is one of the reasons why the Civic 8 pizzas have a very low cornice, almost flat in thin dough and evenly with full version. To make a pizza very thin and light is a choice also due to Cagliari's square that, explain the owners of pizzeria, would you like a thin and crispy base and does not like high sides. The risks of such preparation, however, are always lurking: a more frequent burning of the outer edges and increased flavoring mixture moisture sensitivity. Civic 8 pizza is not exempt from these problems and would love to try it with a stick closer to 230 grams and with edges higher. However, I must say that the quality of the ingredients that are used is so high that partially compensates these defects. 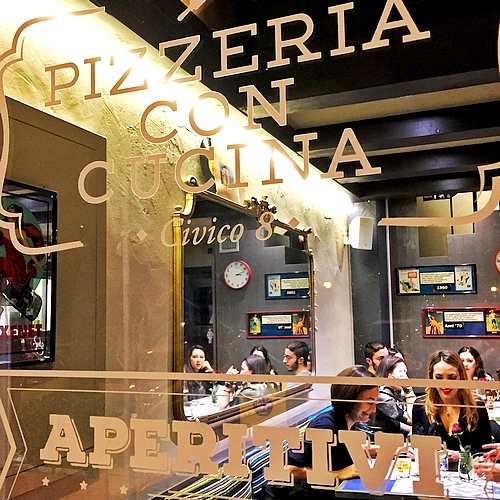 The absolute protagonists of Civic 8 am then the pizzas. “We want to give our customers the opportunity to eat the whole pizza”, explain, clarifying with this phrase, the local paper because it is built completely around the pizza. There are no appetizers, at most there is some ' Salome ': Toast with various toppings, from the hot burrata mortadella and confit tomatoes, via hoax, salmon and parsley or pumpkin cream and crumble Bacon (4-6 euro). For those who did not like the pizza, There is a small meat cuisine, vegetables and salads: sliced beef (13 euros), fried chicken wings or a trio of burgers (10 euro), potato chips, grilled vegetables or fennel gratin (4 euro), two salads-main dish to 10 euro. 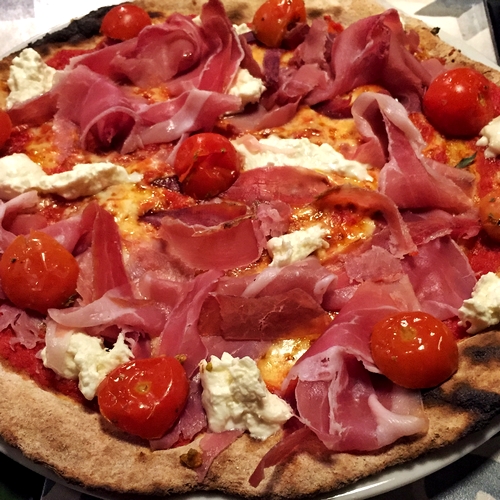 The pizza card is exterminated: 30 variants offers from red and white pizzas. I, for nature, I prefer the limited choices, because I guarantee of freshness of ingredients. In this case, though, having tasted four pizzas and observed ones at tables close together, I must say that all the ingredients, from the most simple to the most rare, are high quality and are used in quantities far too generous. Among the ingredients, sardine productions stand out as Fiore sardo Dop, the excellent local ham, but the menu is a palette of all the good there is in Italy: Sicilian red prawns, red onions, Yellow tomatoes of Vesuvius, finocchiona, burrata di Andria cheese, Capers. As the first pizza I tried one with mozzarella, burrata, local ham and tomato confit and picked the integral dough. The flaw is clear: edge too low and practically Rusk, but absolutely promoted condiments. Soft and tasty ham, juicy tomatoes, the burrata served at the right temperature (environment). 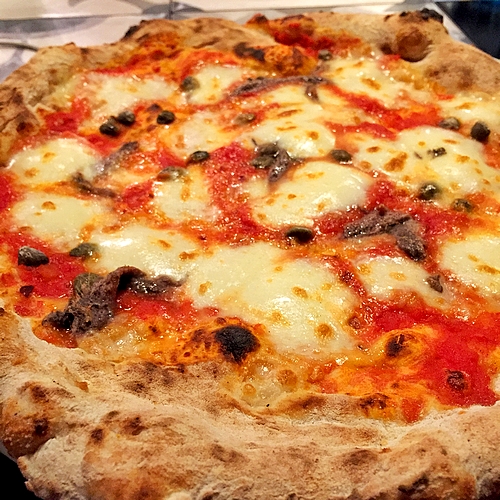 Then I went on a classic of all pizzerias: the Naples (7 euros) with tomato, Fior di latte, capers and anchovies. In my opinion the best: served piping hot, with the cream filling and a great tomato sauce, from the nice balance between acidity and sweetness. The slightly wider edge of the other pizzas and bubble-free burn. Despite me being drawn to often from weird pizzas’ and details, I always try to try something classic, because in my opinion is on these cornerstones of tradition that you play the game. Never the less, Let me point out some pizzas whose accompaniments have piqued: mozzarella, stracchino, Truffle mortadella and tomato confit (10 euro), or burrata, Grilled artichokes, local ham, coppery sweet and sour onion and lemon zest (12 euros). 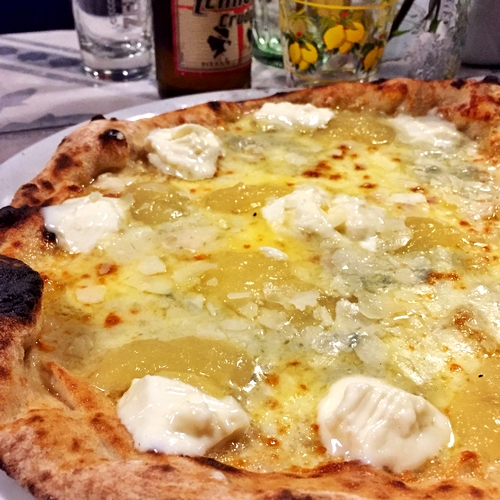 Among those creative I chose a white pizza with stracchino, mozzarella, cheese fiore sardo Dop, gorgonzola and Apple jam home made (9 euro). I love blue cheese, I match often honeys and jams and this pizza intrigued me. I found the combination very well thought out: the flavor of fiore sardo Dop and gorgonzola are balanced by slight acidity stracchino and sweetness not cloying of applesauce. The pizza I liked and enjoyed the prevalence of sweet note. Very courteous and prepared the room staff, able to answer any technical question about dough and sourcing of raw materials, affable and able to take criticism well.

Finally, I tasted a good red pizza with stracchino, Eggplant and fresh basil (8 euro): simple and direct, but the fried eggplant have certainly given the pizza extra sprints. In Sicily, We prepare the pizza alla Norma, combining the ricotta salata, but stracchino is a great idea because, in mouth, compensates for delicacy and softness that gives the ricotta cheese flavor. This pizza also deserves a round of applause for the absence of burns and good firing point. I should note that practical Civic 8 very competitive prices, given the quality and quantity of ingredients used: pizzas range from 7 euro and Daisy of Naples, up to 13 euros reserved for pizza with prawns of Sicily, While the average price is between 9 and 10 euro. 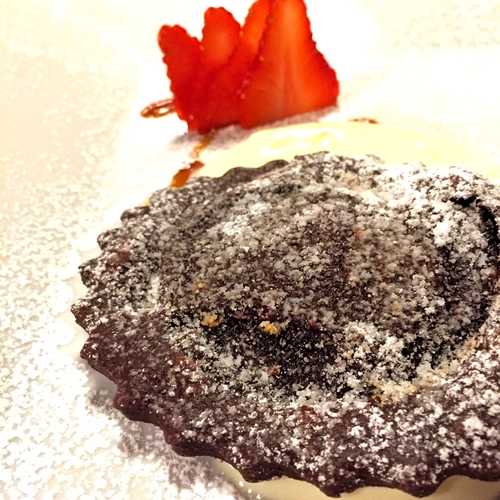 The only sour note was really sweet. In paper, There is a minimal choice: Pizza with Nutella (7 euros, a dessert that honestly I would view the meticulous and commendable research of ingredients made in this place and since it is eaten pizza until two minutes before), Cheesecake, Tiramisu and fresh fruit salad (5 euros) and, from last, the “Seada” chocolate craftmade stuffed with pears, cinnamon and nutmeg on chantilly cream (6 euro). Of course I ordered the seada: I love this sweet, I take it whenever I can and the fact it was a chocolate variation with pears and cinnamon has me excited. Actually, the cake turned out a disappointment: non-friable dough, impregnated with oil and moistened by the filling of ricotta and pears. Overall, I noticed a lack of sweetness uncompensated even from chantilly cream. You can do much more and what the recipe in a radical way. Poor wine list and beer, but by choice: in paper, regional Le Moretti (to 6 euro, some’ too commercial), the inevitable Ichnusa (3,5 euros) and the brewery craft beer Quattro Mori (8 euro); In addition, six Sardinian wines (three red and three white) by the glass or bottle. I said “by choice” because the beers aromatic, complex and very little basic wines were chosen to affect as little as possible on the taste of pizza and be able to enjoy the best the star of the evening. Choice that may be not acceptable but understandable.

Reviews: Zash restaurant in Riposto, the...

Sicilian, journalist, food writer, traveller. I live in Rome. I love to tell the beautiful and the good of Italy. Read more