Reviews: Buatta, the dishes once in the heart of Palermo 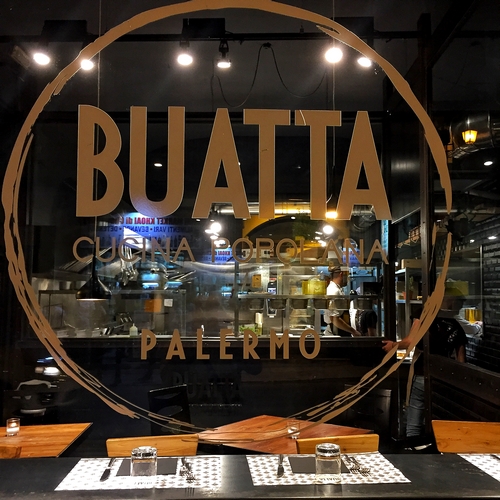 The “Buatta”, in Sicilian, is the container, mostly metallic, It was sold the peeled tomatoes, the island's cuisine and indispensable symbol ingredient creations such as pasta alla norma, the caponata, La parmigiana. One senses, then, name that restaurant “Buatta – kitchen commoner” you go to enjoy the typical cuisine of Palermo. And really there, located between Caron and the Vucciria, areas with high tourism rate, where mass catering has become too often, with menu and local copy, You can still taste the typical small towns, Thanks to environmentally friendly and quality products of tradition. Buatta has chosen to retrieve the old recipes in their original form, starting with an equally ancient place: luggage Quattrocchi 1870, restored in order to preserve its original character in the typical black and white checkered floors and cast iron columns that dot the Art Nouveau Hall. 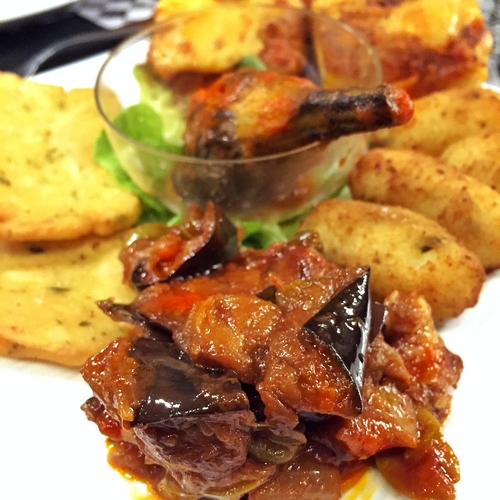 Buatta's cooking is completely exposed and the Brigade works so that anyone can see the preparations (even from the street) from the point of view of transparency which starts from the kitchen and ends in the pot, through a process of development of local raw materials, provided mostly by small producers, with an eye to slow food. Among these: the lentils of Ustica, the Salt and garlic caper of Nubia. With Buatta, the originators Franco Virga, Stefania Milan and David Baker wants return to tradition. To do this you are entrusted with chef Brad Campbell, that varies its menu according to the seasons and the catch. I recommend you try the “tasting Buatta”, to give you an idea of the Palermo street food but also some key dishes of the area: panelle, potato potato croquettes, the sfincione, the caponata and the classic Eggplant “abbuttunate” , that is stuffed with Mint, provolone cheese and baked in tomato sauce: one of the dishes of yesteryear, you almost lost your memory. 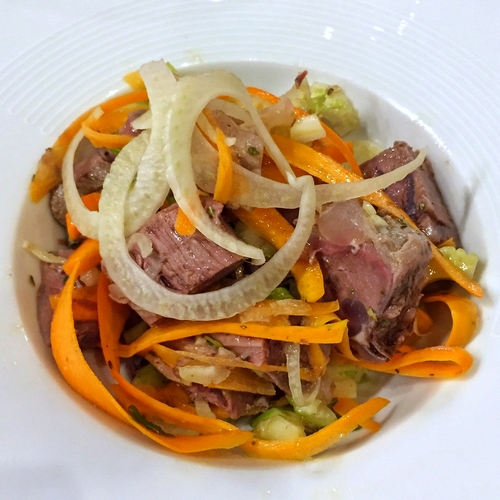 The restaurant offers a cuisine I tasted more time in restaurants, that is the true tradition of Palermo, well executed and without variation. A kitchen that has certain peculiarities compared to other parts of Sicily. So, on paper you can find gourmet Sicilian cuisine, those who once prepared the monsù: from fresh boiled salad (8 euro) with vegetables and olives, Sicilian olive oil and seasoned with black pepper, until the sfincione (5 euros), I'd rather have a little’ taller and with a more assertive dressing. 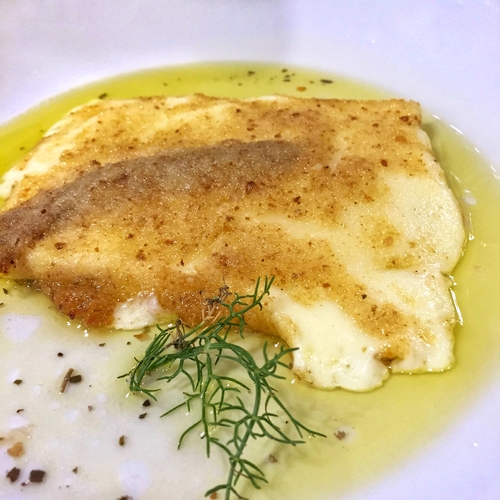 Among the starters, deserves a glimpse (Maybe collective, having regard to the amount of calories) caciocavallo argentiera (7 euros), with a dash of vinegar and the scent of fresh rosemary. There are also paper classic Sarde a beccafico and l’octopus salad (7 euros) and a great eggplant parmesan (7 euros), antique flavor. Good especially the tomato sauce used, with that note sweet and sour together own the best Sicilian tomatoes. 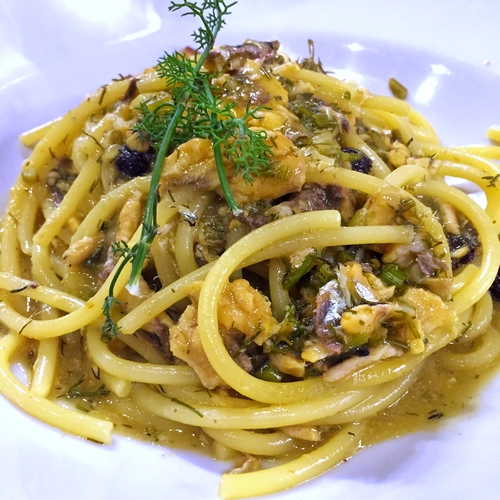 The first dishes are all made of cast, with pasta of Gragnano: I tried the classic bucatino with sardines and fennel (10 euro). Cook the pasta al dente, full of sardines, I just wish a greater amount of fennel to a more intense aroma and a slightly narrower sauce. Overall more than satisfactory. 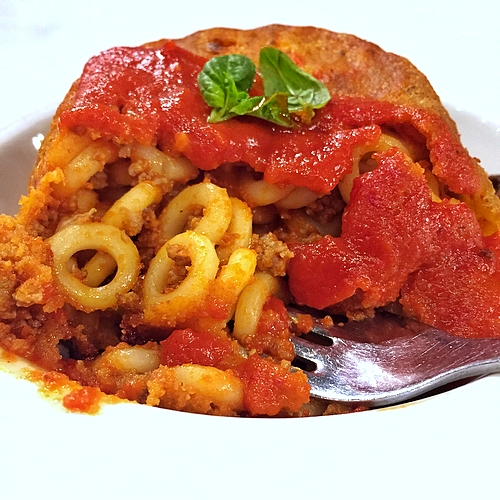 Also promoted the Sicilian dish Sunday: the anelletti al forno Palermo (without the Eggplant) with meat sauce, smoked cheese and hard-boiled eggs (7 euros). Served in individual portion, with the classic burnished crust, anelletti were also to a firing point acceptable despite being obviously prepared in advance. The problem of timbales, even at home, is always overcooked pasta. For this reason I order them rarely. I have to say, instead, from Buatta would recommend trying anelletti al forno, Why do they deserve the taste. In paper, even the bucatino with anciove (the anchovies, at 9 euros), the ubiquitous pasta alla Norma (9 euro) and a dish that I ate always from small but extraordinary in its simplicity: the “Spaghetti pic pac” (8 euro) topped with plum tomatoes, fried in olive oil and Nubia red garlic. In paper, It is always also a proposal of soup based on vegetables, serve with or without pasta (8 euro). 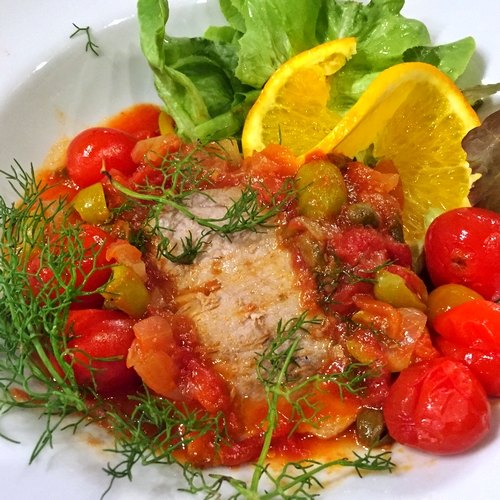 The latter range from meat (from 8 to 12 euros) and the fish (from 10 to 12 euros). I recommend you try the roast crumbed Palermo: a thick slice of beef about 1,5 cm, marinated in extra virgin olive oil and breaded with bread crumbs and oregano, cooked on the grill: soft and succulent. Or meatballs in tomato sauce. Among the fish, Let yourself be tempted by the fresh catch of the day at Panarea, served with tomatoes, green olives and capers. or fried day. 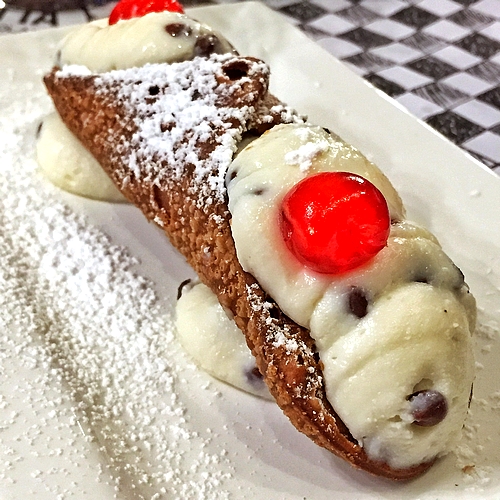 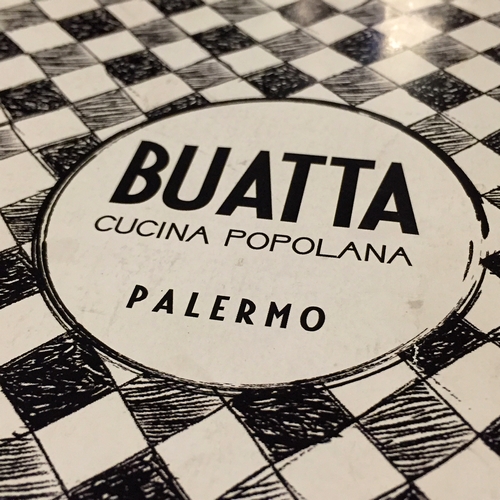 The service is dynamic and courteous. Dinner reservations are not accepted and, Since the place is often crowded, I advise you to anticipate the Dine around at 20. At lunch, instead, You can reserve a table. An address to keep definitely exists on a route from Palermo. Good Sicilian craft beer proposal. Obviously, You can order a typical wine chosen among the best on the island. Definitely recommended.