NEW POST
Apples cooked in a pan
The Osteria del maiale nero: the Nebrodi on the table
Rice arancini alla Norma
Reviews: Pizzeria Verace Elettrica in Milazzo
Swordfish au gratin
Sardinia: the Costa Verde between beaches and mines
Fish soup with conger
The siccagno tomato: red gold of Sicily
The season in September: fruit, vegetables and fish..
Grapes in the kitchen: properties and recipes
Home » Reviews: AcquaSale a Calasetta, pizza on the sea with the touch of Renato Bosco

Reviews: AcquaSale a Calasetta, pizza on the sea with the touch of Renato Bosco

The sunset over the sea in the look and the sand of the little beach Cussorgia, a Calasetta: It is a natural setting of great simplicity and beauty that is the backdrop to Acquasale, a quality pizzeria opened in July 2018 on the island of Sant'Antioco. A pizzeria that gives a nod to the world of breakfast, aperitifs and, in part, the little restaurant, especially fish. An ambitious project, who wants to give an added value, in gastronomic terms, in this corner away, but beautiful, South Sardinia.

Acquasale is a local built directly on the sand, where there was a time restaurant Il Gabbiano, with a 360 degree view of Calasetta, Portoscuso and the island of San Pietro. The furnishing colors are in harmony with the beach: chiari, bright, with shades ranging from white to beige. Marco Piga, with a background in the world of hard events organization, and his partner Franco Cancedda, with long experience in the catering and hotel industry, have decided to launch a proposal that, Sant'Antioco and Sulcis, It stands a very good value for money, focusing especially on pizza, sector in Sardinia, for some years, He is giving pleasant surprises (you see Selection in Cagliari ReMi in Sassari). 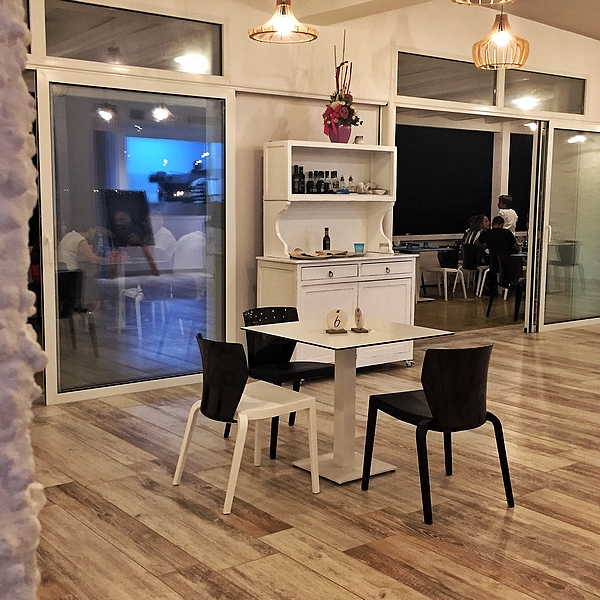 “Pizza, fried sea” is the claim of Acquasale, opened in July 2018, in time for summer. Among room and kitchen, The team consists of 16 people, predominantly young Sardinian, ben preparati. From Acquasale pizza comes first, because behind this project is the advice of one of the greatest Italian experts: Renato Bosco, owner of the famous pizzeria “Sapo”, San Martino Buon Albergo, in the province of Verona. The long-standing friendship with Marco Piga has allowed this pizza place to have an excellent advice that, in fact, It is in itself a quality mark. The signing of Bosco stands on the kitchen sight glass. One dough with flour Molino Quaglia, leavening long (36 ore), electric oven Moretti and three types of pizza: fried, normal and high. The pizza chef is Luca Pinna, which followed an internship with Renato Bosco. In the kitchen, among others, there is also a young confectioner. 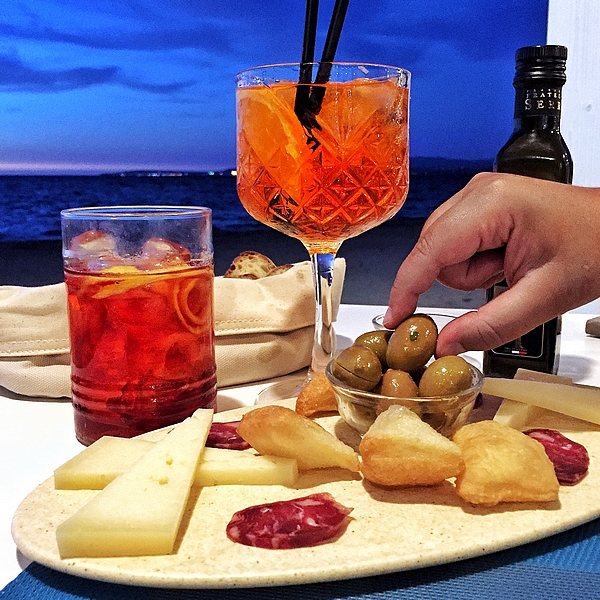 The card opens with the pizzas prepared with seasonal ingredients and with small entrée seafood. Acquasale is fried, because the proposal also includes an excellent fried mixed seafood (14 euros), composed of squid, shrimp, anemoni (orziadas, in Sardinian), mullet, Fish paranza. Before dinner, or even without dinner, Acquasale becomes a lounge on the beach with Sardinian products aperitifs: salami, pecorino and semi-ripe olives, accompanied by cocktails watching the classics of mixology. From the restaurant come tartare (15 euros) or cut bluefin tuna (17 euro) and swordfish tataki in a pistachio crust (12 euros). In paper: tempura shrimp and vegetables (13 euros) or fried mixed vegetables (8 euro), suitable for vegetarians. A focus for vegetarians also in “veg tasting” (9 euro) laying down a thousand leaves of vegetables, a salad of fennel, oranges and walnuts, and chickpea flour. Among the starters, Finally, do not miss the platter of Sardinian products. In the menu also a small proposal meat: cut Sardinian ox (15 euros) and Sardinian beef burger (9 euro).

The pizza menu (with prices ranging from 6 € Daisy, 15 of tartar raw shrimp and tuna) It has a clear indication of allergens next to each pizza, and information with regard to allergies (lactose, celiac disease). There are several proposals for vegetarians and vegans: crema di verdure, mixed vegetables, toasted almonds and tomato confit. Three types of pizza proposals: tradition, creative and fried. The ingredients are chosen mainly in Sardinia: dall'Ovinfort Casa Fadda to Casizzolu cheese Montiferru, from ham Villagrande the Grand Campidano cheese. No shortage of anchovies Cetara, Pantelleria capers, wild salmon Sockeye, the olives, mortadella IGP Alcisa. 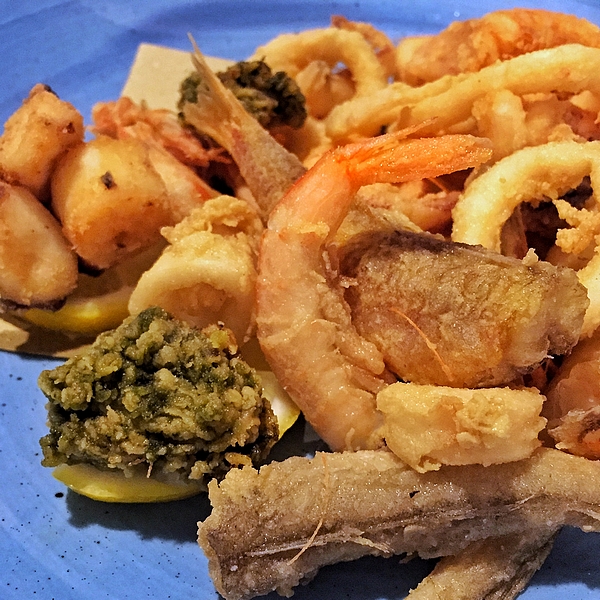 At the table, It comes before everything fry. Well done, dry frying, very varied, crunchy. Particular the inclusion of sea anemones, as a reminder of the Sardinian tradition of frying “orziadas”, the pride of seafood in the city of Cagliari. The Acquasale pizzas instead all arise from the same dough, studied by Renato Bosco, but they are presented in two types of cooking: a traditional Italian dough and dough soft top and that looks like a gourmet focaccia, cooked in a pan. 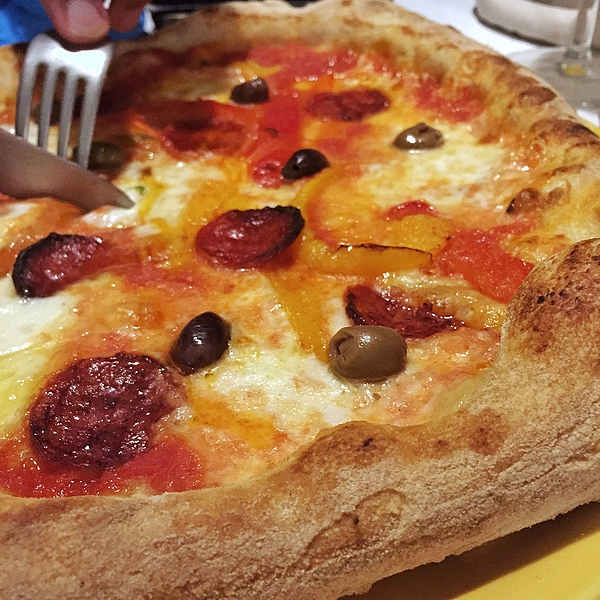 The first pizza we tried the hot Montiferru: tomato sauce, Fior di latte, casizzolu cheese Montiferru, Peppers, spicy dry sausage, with a trimming of a raw olives and chilli oil (9 euro). A well-leavened dough, not burned thanks to the use of the electric furnace, which allows a more regular temperature management during cooking (350-360 degrees) and avoids the formation of bubbles and black burns. A gourmand pizza, with ingredients with strong flavors and well blended, we liked. 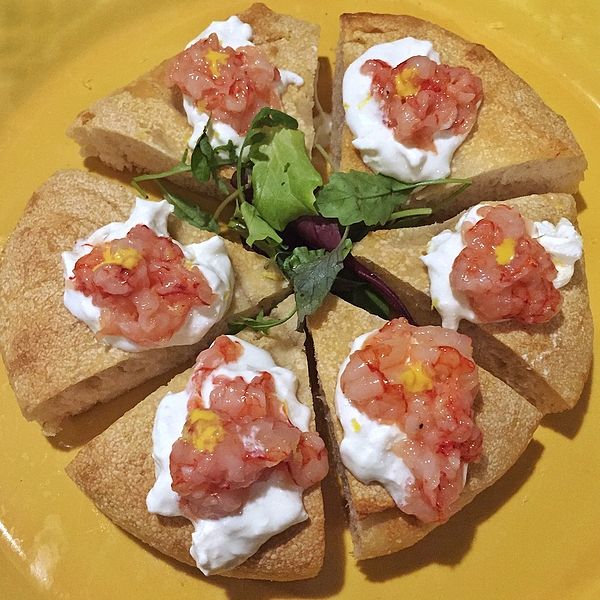 To follow, for the type gourmet focaccia, We tried the pizza topped with raw tartare of red shrimp, stracciatella burrata from Puglia, saffron and lemon zest (both very poorly represented at the level organoleptic). The dough of this pizza is identical to that of the previous pizza, the thickness differs only: the base is put in a pan with high edges and cooked electric oven. The cake was very well developed in height, with uniformly distributed alveoli. Ben cotta and Alveolata, but with a too abundant dough in quantity compared to the sauce of shrimp and burrata that, as good and fresh, It has a tendency flatly sweetish, resulting in a taste a little’ monotonous. A pizza better balance, perhaps adding a saline touch (powdered capers?) or one sour (lemon gel, passion fruit?).

Among the desserts, a bold and delicious interpretation of a sweet typical Sardinian, to Seada, proposal pizza fried version, with pecorino cheese and honey. We are not, instead, satisfied with the interpretation of the Sicilian cassata. Several execution errors, from the stocks and the combinations of flavors. Not only because there were no similarities than the Sicilian cassata, but also because the complex was cloyingly sweet, Having regard to the excess sugars and with a grainy texture and dry. To be revised radically.

To note the good quality of digestive. We tried a ginger-flavored spirit, really tasty. Overall, Acquasale worth a visit. Prices are in a good relationship with the quality of the gastronomic, despite some flaw from a technical point of view: I saw the young age of the local and the experience of the managers are certain that will only improve.

Reviews: “Josto” opens in Cagliari. the...

Sardinia: the Costa Verde between beaches ...

Reviews: Quality and balance. The challenge...

Reviews: pizzeria King-Mi in Sassari, the...

The best dinner of recent times !!! perfect location with breathtaking sunset views. The pizza there are numerous choices that with tuna Top! Mussels and exceptional sea tris. Everything perfect wines and unforgettable seadas. Mirko great companion of the evening. Must try!!!;

You are good, I agree. And I'm glad to hear that the quality has not dropped, Indeed! A warm greeting! ADA