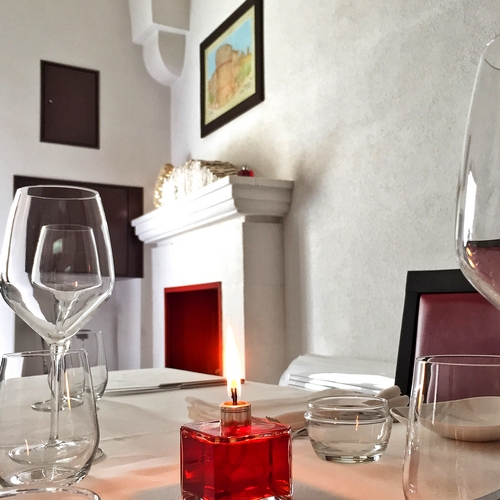 It takes courage to open a restaurant that revisits and reinterprets the traditional cuisine in a small town in Puglia. This courage had Danilo Life, young chef but with important experiences behind: Chief game of Le Calandre, three years in Haute cuisine in London, in 2013 the award victory “Emerging southern chef”, before returning to his homeland as sous chef in the kitchen of the starry The top of Ostuni. The lure of origins but was very strong, and Danilo decided to go it alone and do really return home: He restructured the tiny grandmother's cottage, in the heart of medieval Carovigno, annexing another small adjacent room and creating a restaurant boutique called which is a mission statement: Creativity. Just twenty seats, between a small mezzanine and ground floor. The kitchen is open, with a large window on the main hall. The restaurant is furnished in a pleasantly bland and modern, painted white, with vivid frescoes on the walls and a white fireplace, Severus, with a fiery red with the Red chairs and candle holders on the table. The great challenge of Danilo is making your entertainment is different’ at the center of a triangle of wonderful places from blinding whiteness, from Ostuni to Locorotondo, where there is also excellent cuisine of Puglia, made with excellent raw materials, that is mostly based on a succession of appetizers of vegetables, local cheeses and meats.

We come to the menu: the restaurant presents a proposal for a la carte and three convenient tasting menu. Those of land and sea, with four courses, respectively, 36 and 38 €, and a menu that represents the path of the chef between land and sea, 7 Lifting with a 55 euro. All tasting menu, It is explained in the paper, They are theoretically served for the entire table but, as we could personally check, when there are two of the chef gives great freedom to decide. Prices, when compared to the quality of raw materials, the portions and especially the creative and fun cues present in the dishes, They are really small, also a la carte: starters 12-13 euro, main courses € 12-13, main courses all at 16 euro, sweet all at 6 €. The menu opens with a welcoming chef and closes with a small pastry, all pampering that clearly show the high level of training Life. The bread served to the table is long fermentation with sourdough and is also declined in the variant cereal, accompanied by taralli with hot pepper and Apulian focaccia with tomatoes. The wine list is reduced to the essentials with a regional prevalence of bottles and a small selection of champagnes and sparkling wines of northern Italy, medium to high mark-ups.

We opted for a la carte choice, all different dishes, from appetizers to desserts, also to test the patience and cuisine of Danilo Life. In the chef's welcome florets marinated chicory in almond milk, tasty meatballs with cheese and strips of fried pig, of excellent Parmigiano Reggiano wafers with the typical cream of dried beans, rice chips Venus and oregano (the thing that has impressed me less).

The brigade is made up of three people and the daily challenge is to make it clear to locals, accustomed to the endless series of Apulian appetizers and even tourists, seeking a traditional kitchen, you can eat Puglia – and in very short chain – tasting different cuisine, lighter, made with the same raw materials of absolute quality and excellence, but with a different look. Nice attention to the color combinations on your plate, always lively, brilliant, how nice is the clarity of flavors: especially in some dishes, it is clear that the chef has decided to remove instead of adding, starting a simplified path that leads him to use a little salt, less ingredients, often reworked in more consistencies, always with the aim to enhance the natural flavors of foods.

As fish entree I tried a tuna steak seared, breaded and fried so as to remain rosy inside, with an emulsion of almonds and turnip greens in three consistencies: in powder, blanched and cream. A dish simply good, where attention is focused on the pleasant bitterness of turnip top, served in the nearest portion to a second plate which in an appetizer.

The appetizer of meat, little pig, smoke, cheese and spinach, It was a pork tenderloin (ben) cooked at low temperature, very tender, with a mayonnaise pecorino, a slight smoky, sauteed spinach and crispy. Even in this case, both as a portion either as a conception of the plate, it was almost a second rather than a starter. Is’ Clearly on the portion you play the challenge Danilo Life launches its patrons, generally more accustomed to traditional dishes and especially by the portions 'abundant'.

As a first fish I wanted to try a dish that enclose the essence of Puglia: spaghetti with turnip tops and mussels. Excellent cooking pasta, almost to the nail, decided the taste of broccoli cream, that maintained in addition to the bright green also a nice plant smell, enhanced use much salt Park, also having regard to the presence of mussels. The breadcrumbs were perhaps a little’ too small, then you are slightly moistened by losing the feeling of crunchiness, that would have formed a pleasant contrast to the creaminess of the dish.

A veil of mystery on ravioli with smoked artichokes, squid and mullet. I loved the ravioli, both the invoice and in the right thickness of the dough, both in taste of artichoke cream filling, whose taste is left almost natural, with very little salt and a slight smoky, persistent but not overlying. Good crispy artichokes and thin julienne strips of squid, but honestly I have absolutely felt the presence of the roe, that would have to be made to the saline dish note. I was told that the mullet was grated on the plate: I am a 'pasionaria’ bottarga and I have not really perceived. The dish was still very interesting, maybe next time would be better to put thin slices of bottarga instead grate.

For the second fish we rely on the catch of the day, served with soup of asparagus and potato vinegar: the fish of the day was mackerel, one of my favorite blue fish, served in a fun version of 'sandwich’ asparagus filling, accompanied by a puree of asparagus with its slight bitter note on the finish and a slightly sour potato puree, degreasing. Perfect cooking mackerel, a fish where the cooking times are key: the soft flesh, still moist and crispy skin and caramelized.

In the second of meat one of the few concessions to the use of non-Italian products (I'd hardly Puglia): he foie gras. The dish was a beef tenderloin served with escalope of foie gras and potatoes Raspberry and I was lucky to be able to taste, because already the following week to my visit, with the menu changing, the plate has been replaced with a more spring. Good cooking meat (I had not asked too much blood), very good fois gras, pleasant acidity of raspberries with potatoes, although not exciting from the color point of view: I maybe I added a note sweetish (fruit compote, Fortified wine reduction) to enhance the fois gras.

For dessert we opted for chocolate, caramel and coffee and the coffee and tobacco. The first, served in a holster, It was made up of a solid base of cake with dark chocolate and coffee, hidden under a warm caramel mousse siphoned from very light taste, garnished with a chocolate pastry that, with the warmth of foam, It has melted, creating a very greedy mix. A sweet thought, with success, for those who love chocolate.

originality prize for the second dessert, coffee and tobacco, presented in a very special way (though perhaps not very functional exaltation of taste) with a fake cigarette with white chocolate and lightly smoked tobacco served in a sort of ashtray with a crumble to represent some’ fake ashes, preliminary to the real sweet, a Bavarian chocolate and coffee, crumble and cream English. Actually, tobacco taste was too lightweight, but the Bavarian well made and the sweet, overall, pleasant and balanced.

With the coffee came the pastries, both offered by the chef: biscuits sablè pasta, tartufini coconut and filled chocolates. All very well done. Maybe the restaurant Danilo Life has not been intercepted by the big Italian guides, but rest assured it is definitely worth a visit.