Reviews: "I Ruggeri", in the Sicilian tradition table revisited 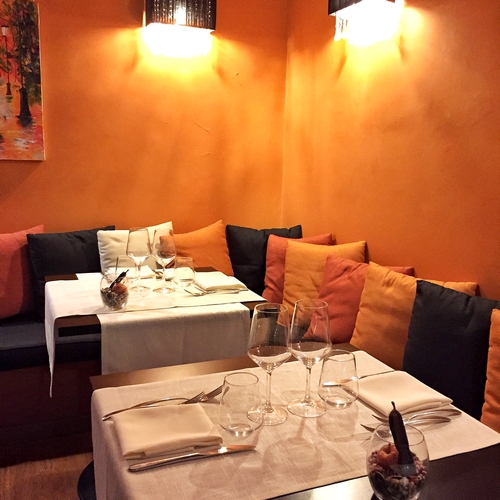 In a city like Messina, overlooking the Ionian Sea, find a good quality fish cuisine, in both traditional and modern twist shouldn't be a problem. So it is not: my city, I have to admit, It does note definitely nor for entrepreneurial spirit nor ability to innovate in the catering sector. The restaurants are the most popular are almost always the same and serve firmly anchored in traditional style, with little innovation and effort of imagination, and almost always some’ plaster and dedicated to great events. In the years, In addition, many historical places have closed down level, and have been replaced by pizzerias, pubs and brasseries that look to a young audience, with a less demanding and therefore costs. In this context, deserves to be applauded the initiative of Franco and Alvise Ruggeri, in the restaurant "I Ruggeri" – Boutique restaurant in one of the busiest areas of the historic centre, in the immediate vicinity of the Teatro Vittorio Emanuele (not surprisingly it also poses as a privileged destination for after theater, just drinking a good glass and enjoy a dessert). His father Frank and his son Alvise have clear ideas, Thanks to previous experience in catering: the restaurant consists of two small rooms, with only a few tables, warm colors in shades of Orange, low lights, an intimate and cosy atmosphere. On the walls, wind long benches with many colorful cushions and many paintings. La mise en place is simple and elegant, with clear and runner small dried and fresh fruit table centre piece. 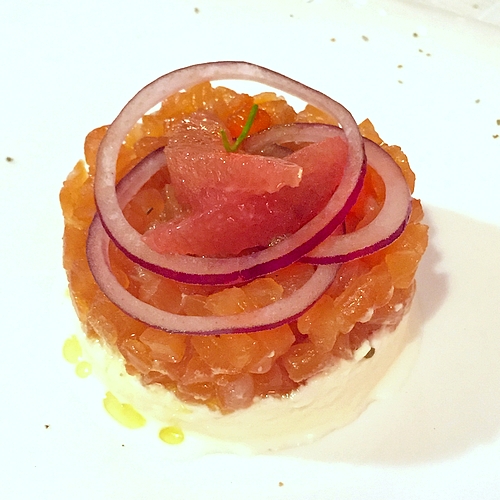 La cucina dei Ruggeri is primarily of fish, with a small selection of meats (senese pig knuckle, Lamb and beef). And daily dishes are off menu based on local and seasonal fish. The choice is to exploit raw materials with simple and essential preparations: for this reason, is banned frying and priority must be the raw, fast cooking (in a pan, grilled or steamed). The traditional Sicilian dishes and Messina in particular dominate the menu: from pasta with sardines to swordfish greedy, from the anchovy pie paddlefish parmigiana to seafood caponata. There are also small incursions into other territories or special combinations. After a short welcome entrée and a glass of bubbly offered by home, We started with appetizers (from 12 to 15 euros) and we tried a tartare of salmon gravlax (marinated in salt, sugar and herbs) with red onion, pink grapefruit and burrata di Andria: a clean and well balanced flavors plate, where the natural sweetness of the onion was married to concordance with the sweetness of burrata which is countered by grapefruit acidity. 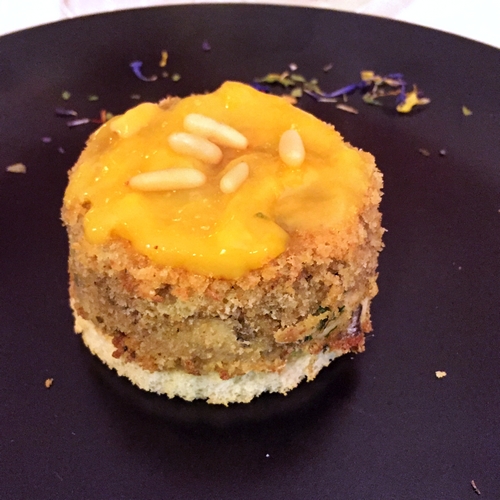 We continued with a tart citrus sauce au gratin with anchovies and toasted pine nuts, clearly in the tradition of Sicily but made especially thick orange sauce. A simple dish but interesting, that enhances the features of bluefish. 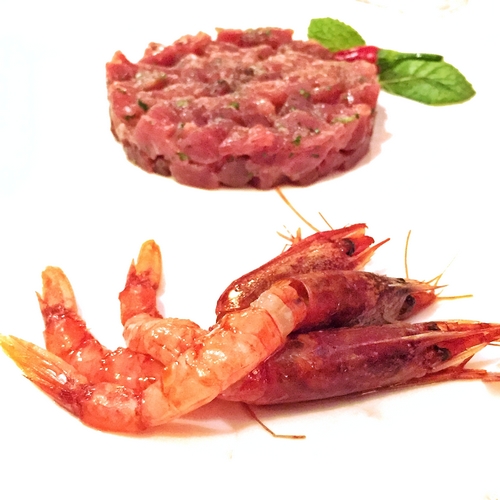 Excellent quality of raw materials in the tuna tartare and Red prawns of Mazara del Vallo, Sicilian olive oil and accompanied by a selection of natural salts. I appreciated the decision to leave the diner the choice of toppings to suit your taste. 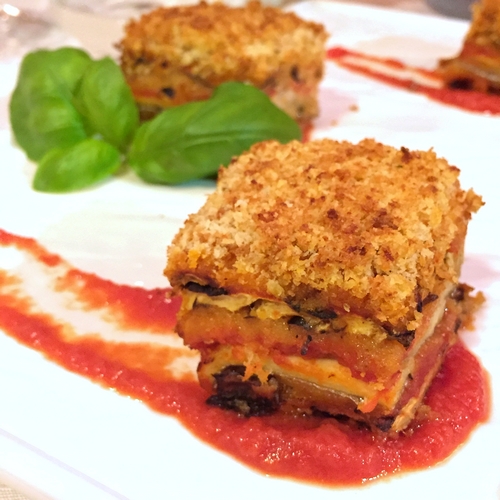 Very positive judgment even on fourth Starter, typically maiden: a paddlefish or Parmesan fish flag, served in small portions and accompanied by a simple tomato sauce. Excellent crispy crust of breadcrumbs, the overall balance of the layers of fish and eggplant. The minimal presentation ennobles this traditional dish making it elegant. 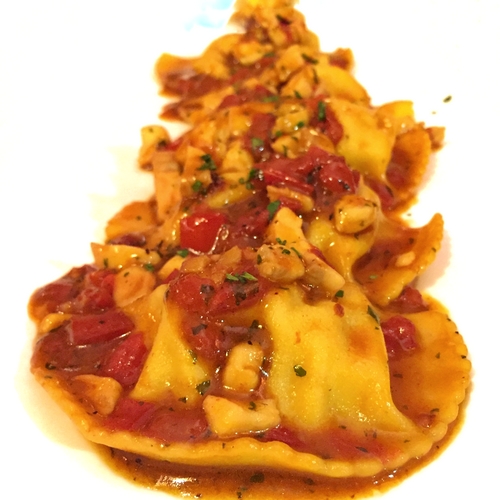 Among the first courses (10-16 euro), served in abundant portions definitely, First we tried one of the specials of the day: ravioli stuffed with sea bass, topped with a ragout of sea bass and cherry tomatoes and a few fish sauce. Definitely a dish full of flavor and well presented, Although the limited was slightly too tangy than inside the dumpling, very delicate. 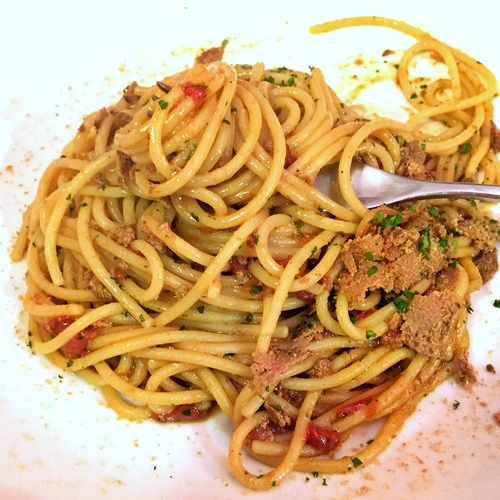 Yet, simple spaghetti with tuna ROE, topped with some chopped parsley and tomato. Fine cooking pasta, al dente, But even here an excess of salt due to the strong salinity of bottarga gave the dish – still good – more flavor than necessary. 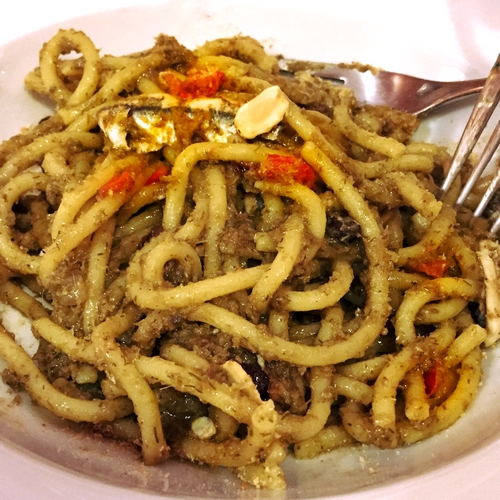 Finally, the dish in my opinion better: pasta with sardines. Handmade and cooked al dente bucatini (It sounds simple but it's not cook al dente bucatini), with a rich sauce of fresh sardines, Wild fennel, pine nuts and raisins, some small pieces of tomato and toasted almonds that give a nice crunchy touch. I order often pasta with sardines at the restaurant in Sicily, because it is one of the dishes that I do and I consider it a reliable evidence of the quality of the cuisine and the result is often disappointing: the Ruggeri can boast an excellent pasta with sardines, don't hesitate to try it. In paper also a tantalizing pasta with calamari and Malvazija and seafood carbonara.

Two seconds we tried (from 15 euros depending on the catch), one meat and one fish: great Sienese pig knuckle on creamed potatoes. Soft and low temperature cooked meat rosy, with a perfect coating, in a portion quite generous and enough for two people: perfect for those who love meat and especially wants to try a different dish, Since the Shin has no tradition in Sicily. Then I wanted to try the rolls of mullet, stuffed with a filling of fish and bread crumbs, slightly too greasy, garnished with toasted almonds and raisins and served with baked potatoes. Even this second portion quite generous. I love the fish and I found interesting the idea of egg roll (especially considering the amount of pins to remove from threads): the flavor of the mullet was sharp and strong personality, but I was not fully convinced the filling. In addition, I would have added to the dish some sour note, for scouring the palate, Maybe with fresh fruit. In paper I point out also the seafood caponata, Octopus and squid, Millefeuille of swordfish and tuna meatballs with vegetables to Aeolian, traditional Sicilian recipe. 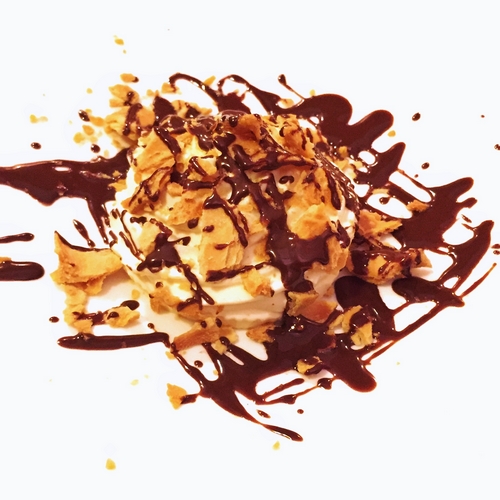 How sweet, We chose the Parfait by cannolo siciliano: a frozen ricotta cream served with a crumbled cannoli Peel and a thick chocolate sauce. Is’ a sweet nice and cool, but in my opinion it would gain from a drastic decrease in chocolate sauce, too invasive than the delicacy of cream cheese, that is the main ingredient of cannoli that, for the quality of the raw material, deserves to be appreciated better. 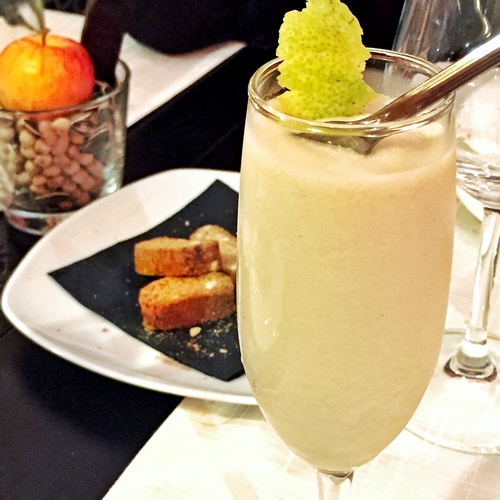 Finally, a lemon sorbet with a pleasing alcoholic note, While at the end of dinner, with the coffee and the bitter, She was offered a small selection of local cookies: piparelli and insudde, both with almonds. The wine list has a wide selection of white and red wine, but there are also national-class wines and a good selection of bubbles, from the Franciacorta to Champagne, also by virtue of preferential pairing with seafood. Markups average. Definitely recommended if you happen to pass by Messina.

Reviews: from Bellavista in Messina, kitchen...

Reviews: Trattoria Borrello, in Sinagra i...

Thanks for the advice, There I will definitely at the first opportunity!

Thank you! Let me know what you think! A warm greeting, ADA