Reviews: Gasometer 38, pizza and kitchen on the river port

Opened from March 2016, Gasometer 38, in the street in the Ostiense district-river port. And maybe it's because of his short life that the pizzeria with kitchen, as is fashionable now, hasn't put precisely in focus its objectives. The restaurant is large and multifunctional: both grey and white, exposed brick, some’ post industrial style and some determined touches of color on. Mixed furniture, some’ confused, overall I was disappointed, except for the uncomfortable wooden chairs and low lights and yellow, as you can see in the pictures, don't bring out the dishes. At the entrance of the Hall, that preserves the footprints of the garage that was once, There is a large bar for cocktails (excellent choice among the proposals in the bar tender) and a small private room for aperitifs and after dinner; then the tables of the pizzeria and cuisine. On weekends, in very busy, you play live music, While during the week by speakers playing music that should make the background, but that is set to volume too high. The counter of pizza is at sight, with a large gas oven. In guiding the work there is Pier Daniele Seu. 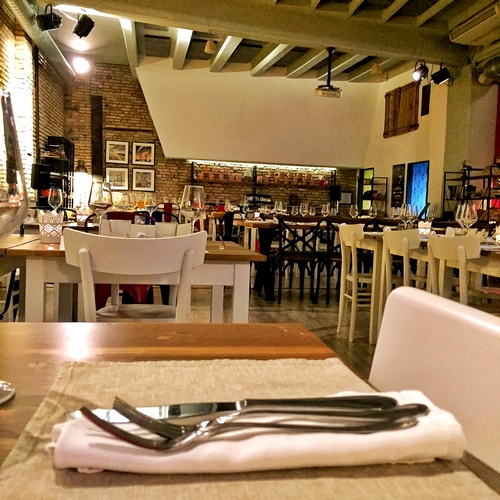 The multifunctionality of the space, It combines multifunctionality of culinary offer, ranging from appetizers (even vegetarians) traditional Roman fried; from first courses, mostly Roman-inspired, up to main courses with very narrow proposals both meat and fish. Obviously, a major role I play pizza. Here are the various proposals: in the Red version there are six traditional pizzas, from 7 euro of the pizza Margherita pizza at 9 euros “Capricciosa Seu” and Daisy Dop. In the white version: six creative style pizzas (between 10 and 13 euros); between her buns there are four proposals with classic pairings, as ham, hoax, burrata, Speck. Finally, You can choose between the “pizzas of 38”: a variety of creative flair but pizzas made with seven ingredients such as “pork Ariccia”, the burrata, mozzarella di bufala, puntarelle, the pillow. La carte menu prices are fairly balanced. 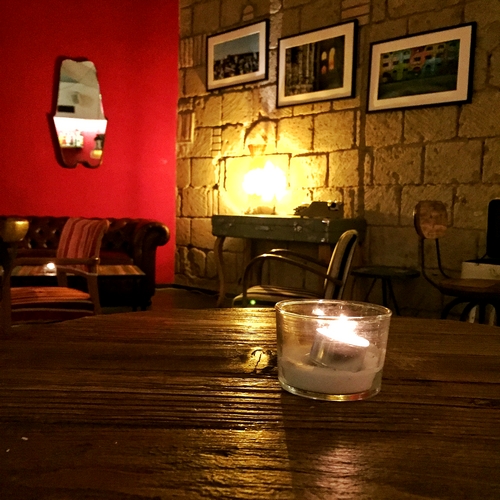 The pizza is made with a mixture of flour of the type “double zero” (average strength, 260 W) and flour of the type “One” stone ground (produced by The 5 Seasons). The yeast used is beer, in very small quantities. The dough, with extra virgin olive oil, water and salt, does two risings: one in the fridge for 24 hours and another for 12 more hours, After the formation of the Pats. Finally, the dough is brought back to room temperature and then baked.

Let's start with order from appetizers. In paper, There are various proposals inspiration and origin, from gourmet bruschettas (6 euro) the creamed cod with cabbage salad, reduction of Myrtle and Parmesan wafer (11 euros), until tomino grilled with thinly sliced pears and honey (10 euro). Among the vegetarian: the classic artichoke “artichokes”, the chicory and turnip greens with garlic and oil (everyone at 5 euros). I tasted the grilled radicchio with burratina and spicy marinated anchovies (10 euro): a dish where the bitter notes of radicchio and sweet ones of burrata balance, Although personally I greatly enjoyed the sour note lingering of the pickling anchovies. Let us look at the “rice balls” (2 euro each), that I order unfailingly in all Roman pizzerias. I tried the traditional rice balls “supplì 38”, with cheese and pepper. My judgment is positive, except that in this case the rice should have been much more al dente (but this is not a problem of the Gasometer 38, but most Pizzerias in the Capital). The Breading was well done, good traditional sauce suppli, full of cheese, very tasty the rice balls in the version with cheese and pepper. Between the fried, You can also choose boiled meatballs (6 euro), cod fillets (3 euro), stuffed pumpkin flowers (3 euro). Well done even the artichoke alla giudia. 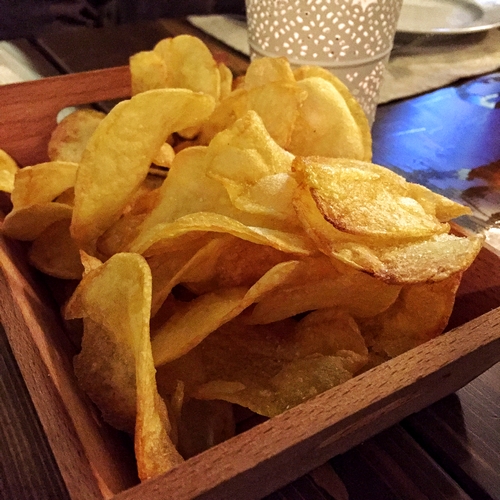 I tasted the potato chips (4 euro), but I found some hot, fragrant, Golden, crispy and really well done while others, in the same piece, they were mushy and cold. Obviously, the suspicion is that they have mixed fried fried chips already previously with other currently. Such a shame. 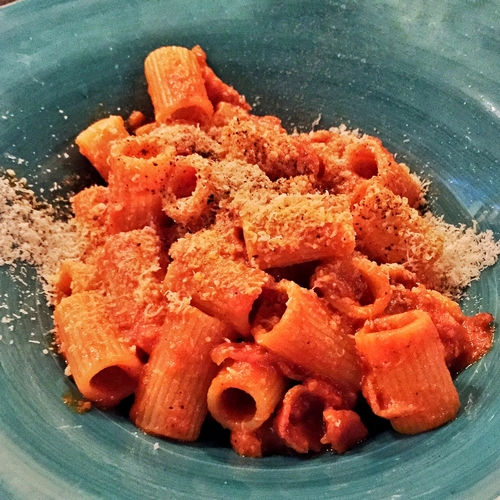 Eight early in paper: traditional “Gauthier”, “amatriciana”, “Carbonara” and cheese and pepper (at 9 euros). To ten euros you can buy two versions “scented” of pasta alla gricia and pasta cacio e pepe; then lentil soup with baby octopus and pumpkin risotto. I tasted a classic dish, the means rigatoni alla amatriciana: the pasta was al dente, the gravy was tasty with a pleasant acidity and a delicate hint of smoked bacon. Absolutely promoted: pasta alla amatriciana Gasometer 38 is better than that of many traditional restaurants in Rome. I haven't tried the seconds, but I quote from the paper: baccalà alla vicentina (16 euros), tuna with liquorice (18 euros); sliced beef (18 euros), burgers (13 euros), Lamb with artichokes (13 euros) and braised veal cheek (16 euros). 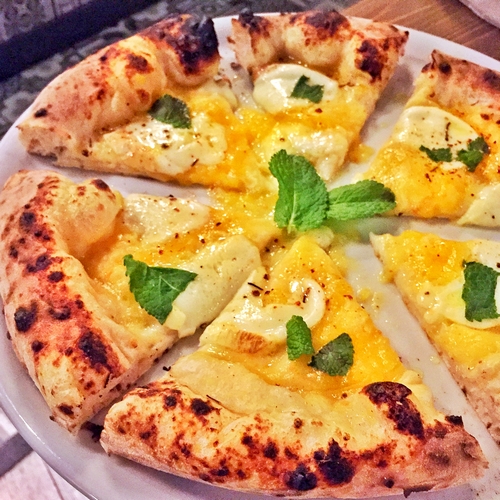 We arrive at crucial moment, the pizza. The chef Seu, friendlier, offered to taste the two pizzas already cut. We had pizza traditional red, Naples pizza with mozzarella, tomato and anchovies, and a pizza “Gasometer 38”, a margarita pizza with yellow tomatoes, smoked Buffalo mozzarella and fresh mint. All pizzas aesthetically beautiful, to eat with your eyes: High Board and not burned, abundant seasoning, of the highest quality both in tomatoes is in cheese. On the palate, as for the dough, the story was different. The Margherita pizza was Gummy yellow, almost raw in the part closest to the edge, very soft in the Center: a shame because the ingredients were quality: yellow tomato with excellent balance between acidity and sweetness; and Mint that works perfectly to give aroma to the preparation. Probably, Cook a little’ longer would have avoided this obvious flaw. 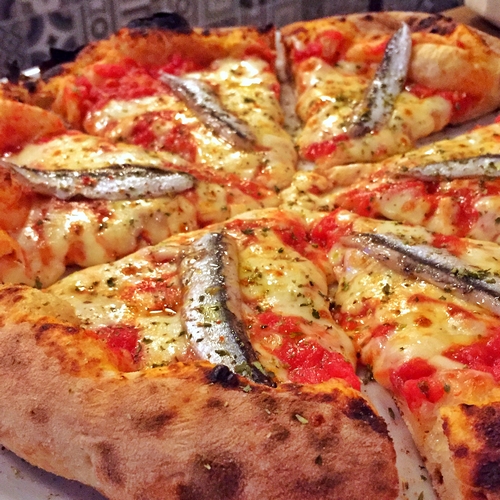 As for the pizza Napoli, beautiful and very greedy, I recorded the same problem by baking the dough. In addition, a very rich sauce helped make saggy bottom of pizza. The cornice is moist result even when opened to verify the consistency of the crumb. Great ingredients: Fior di latte, tomato gravy, oregano scented. Instead, I did not appreciate the use of marinated anchovies instead of anchovies in oil, because the overall flavor unbalanced strong acidity of pizza. 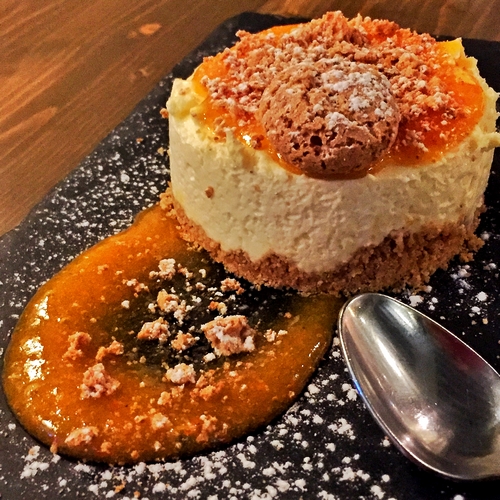 I finished my meal with a sweet, not exciting: cheese cake with Amaretto and cream to khaki (6 euro). Overly soft base has enhanced this sweet monotone that consistency, on the palate, It turned flat and with little personality. In paper, the customer can also choose a disarranged millefeuille with berries, an Apple crumble and tiramisu with peanuts sandblasted (all at the cost of 6 euro). In short, If I had to choose among the multiple personality of Gasometer 38, I would say that the kitchen is much more centered than the pizzeria. You can do much more.

Reviews: Changes, in Rome between kitchen...

Reviews: Olio&Farina, in Rome the pizza...

Reviews: Doors open in Rome from...