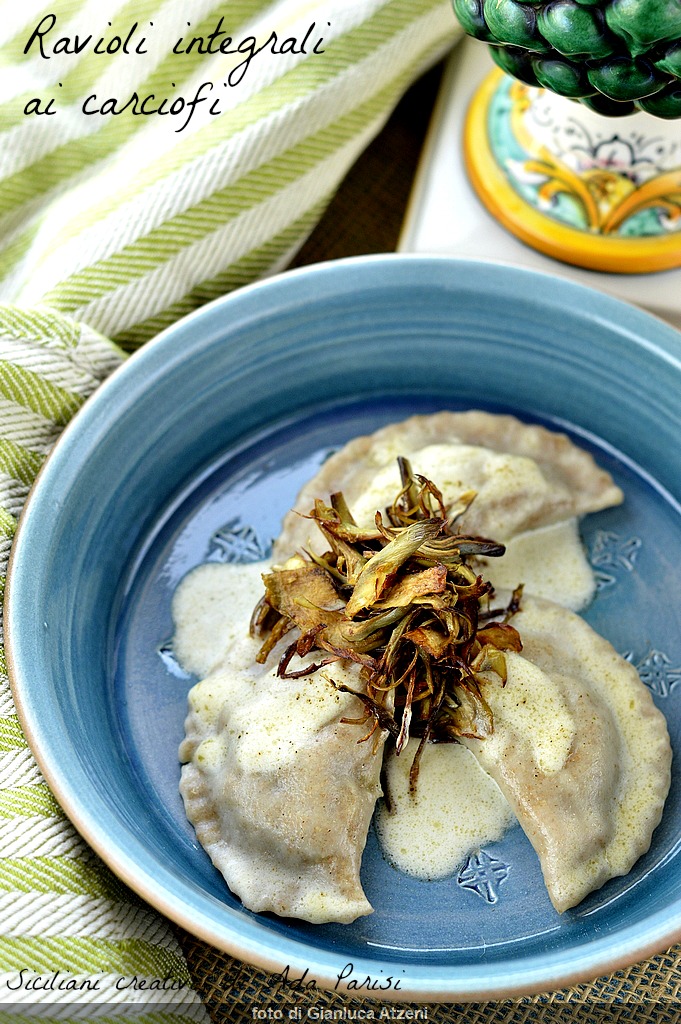 integrals Ravioli with artichokes. Who said that the whole stuffed pasta you can not do? You can do all right: to prepare these whole grain ravioli I used sicilian tumminia durum wheat flour and a small percentage of corn starch. And it's not even egg pasta..

How to make wholemeal stuffed pasta

My secrets to prepare a sheet of elastic enough, thin whole wheat pasta to make ravioli are two. The first is to use hot water in the mix, because it facilitates the activity of enzymes that digest starches, thus favoring the formation of gluten. The second, It is to stretch the dough rest periods, normally 30 minutes, always to favor the formation of gluten. Obviously, you can use any whole wheat flour. The small percentage of corn starch or potato starch is strategic for a greater elasticity.

Obviously, being an integral dough and without eggs, you can not pull the thin sheet, but the result will still be excellent. If you want you can prepare these ravioli even with a normal EGG PASTA, easy to make and pull in thin sheets.

As for stuffing, I wanted the taste of artichokes to be perceived in purity very clearly. Then, I just stewed the artichokes in the pan with extra virgin olive oil, salt and fresh mint. Then I smoothed them with a little’ of the cooking liquid, I adjusted the salt filling and seasoned it with Sardinian pecorino Dop. I assure you that the artichoke is the real protagonist of this dish, and if you like artichokes don't miss all my RECIPES WITH ARTICHOKES, starting from ARTICHOKES STUFFED IN SICILIEN STYLE.

The dressing is easy: I made a pecorino fondue and almond milk and in this sauce I sautéed the ravioli. Then I completed the dish with thin pan-roasted artichoke slats with little oil. Surely this is a dish that requires a minimum of time and attention in the realization. Of the rest, for all HOMEMADE RAVIOLI It takes a while’ of patience: don't forget to look at my VIDEO TUTORIAL step by step on how to make in the house six types of easy ravioli. And have a look at all my RAVIOLI'S RICETTE to find alternatives or inspiration. 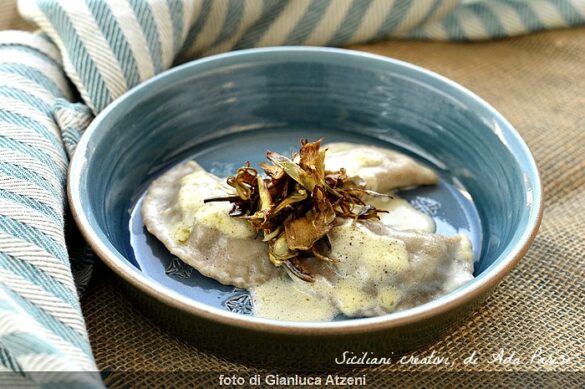 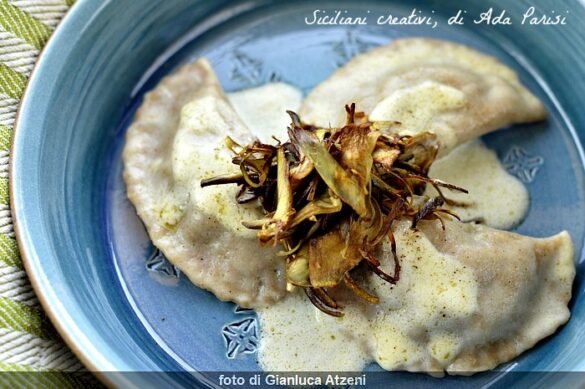 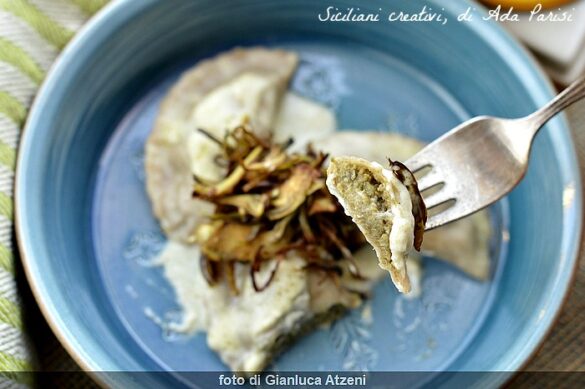 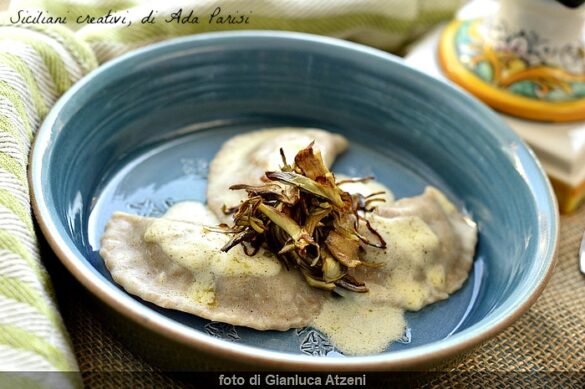 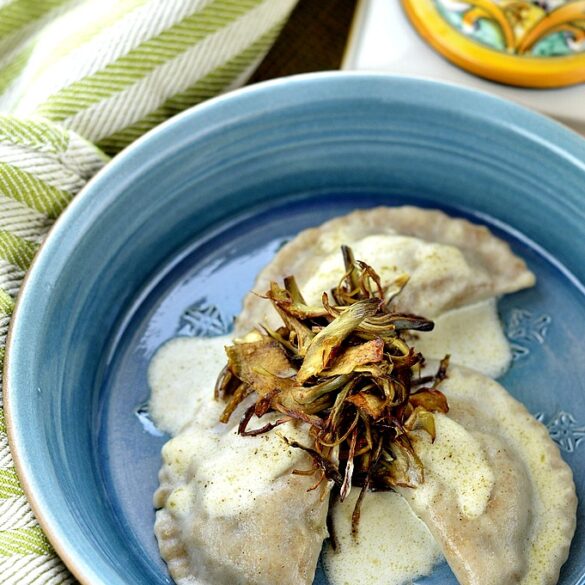 INTEGRAL RAVIOLI WITH ARTICHOKES WITH CHEESE AND PEPPER ALMOND

about 100 milliliters of hot water

60 milliliters of almond milk or cream 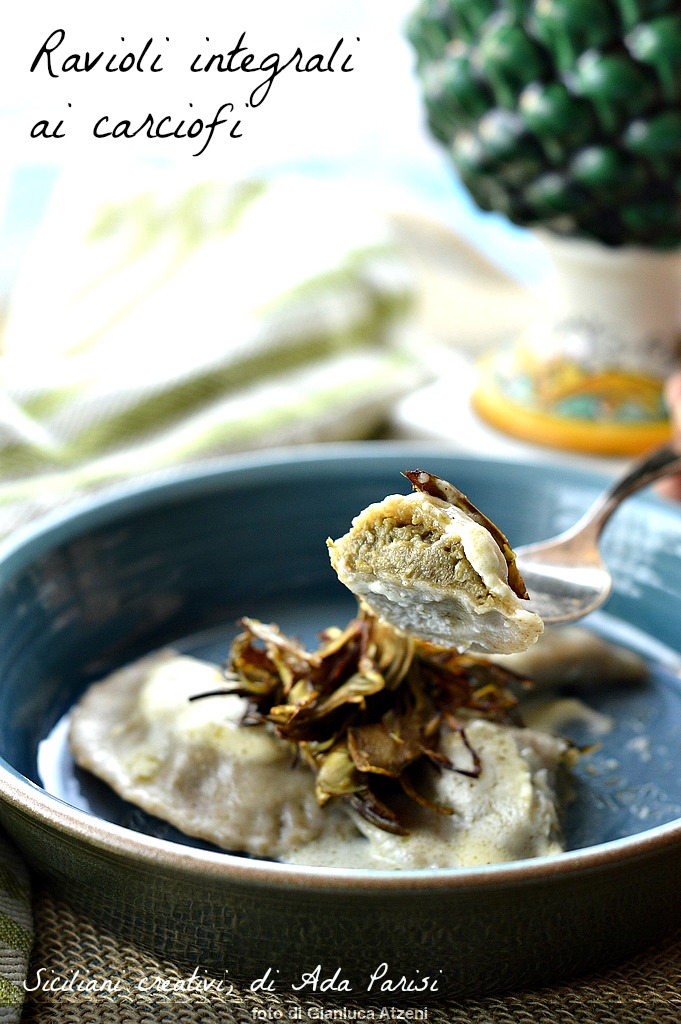 For whole meal pasta, put on the work top the whole meal flour, cornflour, the salt and add hot water slowly, kneading vigorously until you get a homogeneous and smooth dough. Wrap the dough dough in plastic wrap and let stand at least an hour at room temperature, to promote the formation of gluten.

Put a lightly crushed clove of garlic in the pan with the back of the knife and brown it in extra virgin olive oil. Add the artichokes cut into small pieces, fresh mint, a pinch of salt and pepper and sauté them for a few minutes, then add very little hot water, cover and cook over low heat until the artichokes are tender.

When the artichokes are cooked, remove the garlic and blend them with a little' of the cooking water until the mixture is smooth and homogeneous. For greater homogeneity, you can also pass it on to the chinoise. Season with salt and pepper and add the grated pecorino cheese and a little more' fresh mint finely chopped. Cover with film for contact foods.

When the dough will have rested, pull the puff pretty thin, make circles with a dough cup or a cookie cutter and arrange on each circle a little' filling. Fold the dough over itself to form a crescent, pressing the edges well so that in cooking they do not open. For added security, press the edges with the backs of a fork and trim them with a ravioli cut wheel.

Slice the remaining artichoke as thin as possible, grease a large pan with extra virgin olive oil and arrange the artichokes so that they do not overlap. Roast the artichokes over low heat until golden, turn them on the other side and finish cooking. The artichokes will turn out to be golden and crispy as if they were fried, and much more digestible. Obviously, If you prefer, you can also fry them.

For the cheese fondue, put the pecorino cheese in a bowl, add plenty of black pepper. Heat the almond milk slightly but without bringing it to a boil and pour it slowly over the grated pecorino cheese. Mixing, the cheese will melt quickly. Keep in mind that this compound, cooling, will tend to thicken.

Cook the ravioli in salted water, from when they come afloat calculate 4-5 minutes of cooking (it is still a wholemeal pasta) and sauté them in a pan with a drizzle of extra virgin olive oil and little cooking water. Fire off, add the pecorino fondue and keep the ravioli. If the room is too dense, add a little' of cooking water to reach the desired density.

Chickpea meatballs and chard with...

Vegan Cream of artichokes and potatoes