Tomatoes stuffed with rice to the Roman 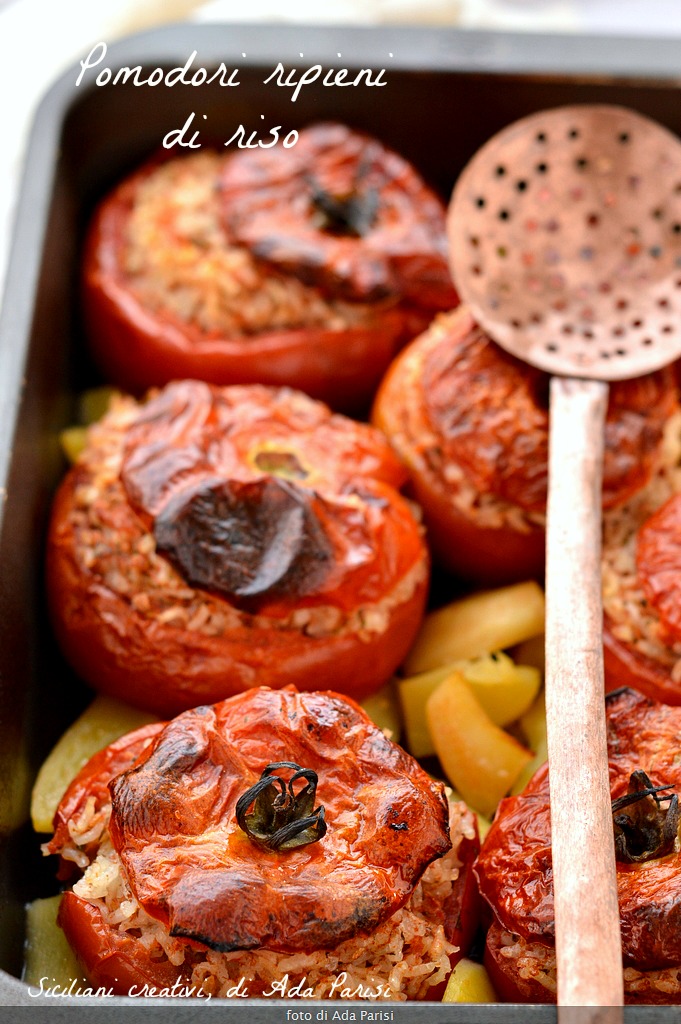 Raise your hand if you don't prepare in the summer at least once tomatoes stuffed with Roman rice: a typical recipe of Lazio cuisine, but present in much of southern Italy, typical of the summer, When tomatoes are in season. In Rome they are also called to the Roman tomatoes stuffed with rice, but it is known that the inhabitants of the capital tend to think that everything is born in Rome.

The video recipe of tomatoes stuffed with Roman rice

On my YouTube channel you can also find the vIDEO RECIPE STEP BY STEP tomatoes stuffed with rice to the Roman. Is, Maybe, you might try even COLD TOMATOES STUFFED WITH TUNA or, if you want to make a great impression, the RUSTIC RICE CAKE AND TOMATOES, the BROWSE FAST WITH TOMATOES AND FETA or the WHOLEMEAL GALETTE WITH TOMATOES AND FETA.

In any case, baked tomatoes stuffed with rice are a very simple recipe to prepare, low calorie, with few quality ingredients: tomatoes, those large round (do not buy them too mature), rice (I always suggest a Carnaroli which ensures the best cooking resistance), l & #8217; olive oil, garlic and lots of fresh herbs. You may have already noticed this tasty recipe is vegan (for nature).

In Rome, in delis and takeaways, They are always present and, by tradition, tomatoes stuffed with rice are cooked in the oven and served with potatoes, for two reasons: from such a side are a robust single dish, great either hot or cold, secondly the potatoes absorb the amount of liquid that will inevitably yield tomatoes in baking. Now you have no excuse not to organize a summer dinner, maybe the sea, bringing to the table the baked tomatoes stuffed with rice. Have a good day! 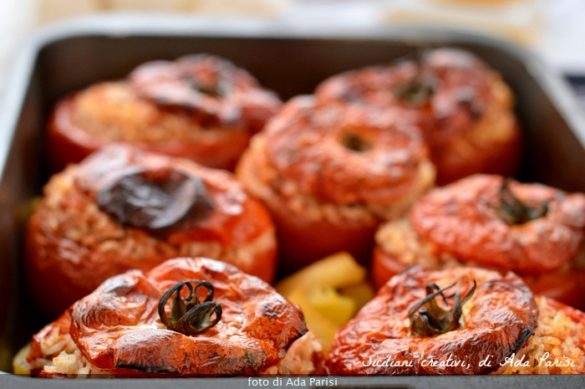 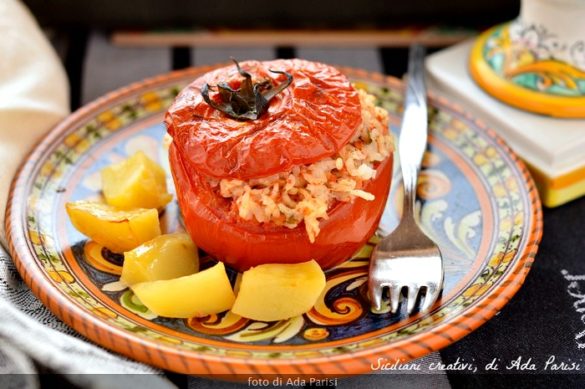 6 round tomatoes from rice

parsley and fresh basil, to taste 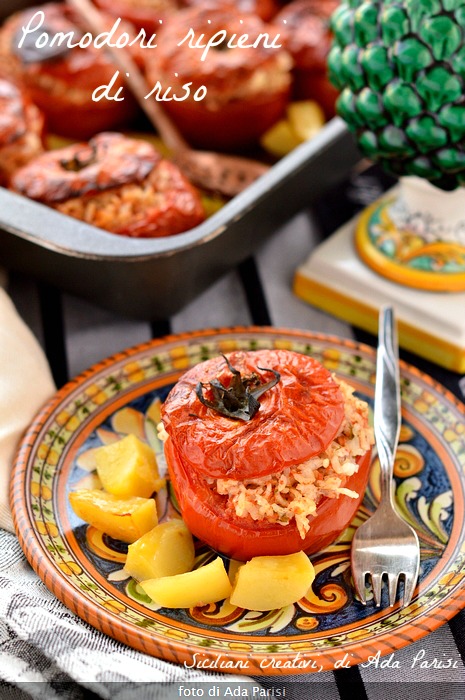 The preparation of baked tomatoes stuffed with rice is a breeze, you have to consider, however, that the rice has to rest in the fridge in the tomato sauce for at least 2 hours, so severely. Look carefully VIDEO RECIPE STEP BY STEP to figure out how to clean the tomatoes and texture of the filling.

First, wash the tomatoes, then cut the top cap and set it aside. Drain the tomatoes using a sharp boxcutter and a teaspoon: deleted seeds, the pulp and vegetation water the tomatoes will have to be completely empty, as you can see in the video. What I have taken away from the tomatoes must be put into a bowl and coarsely milkshake mixer, as you see in VIDEO RECIPE

. Finely chop the garlic and all the herbs you have chosen (abundant, because they are herbs that give taste and character to the dish) and add to the mixture of water and tomato pulp. Pour the bowl even rice, then freshly ground black pepper, salt and extra virgin olive oil. Despite the amount of salt and oil is to taste, I will always recommend to taste and do not skimp, especially with oil. Cover the mixture with the film for food contact and put in the refrigerator for at least 2 hours. Like this, The rice will absorb all the flavor and aroma of tomato and herbs.

While the rice rests, lightly ungete and salt tomatoes both inside and outside. Grease with extra virgin olive oil is also a pan with high sides. Peel the potatoes and cut into wedges rather large. Once the rice has absorbed some of the sauce (you will realize it because the grains are swollen and the liquid in much smaller quantities), tomatoes stuffed with rice, until you get to the brim, as you see in the VIDEO RECIPE . 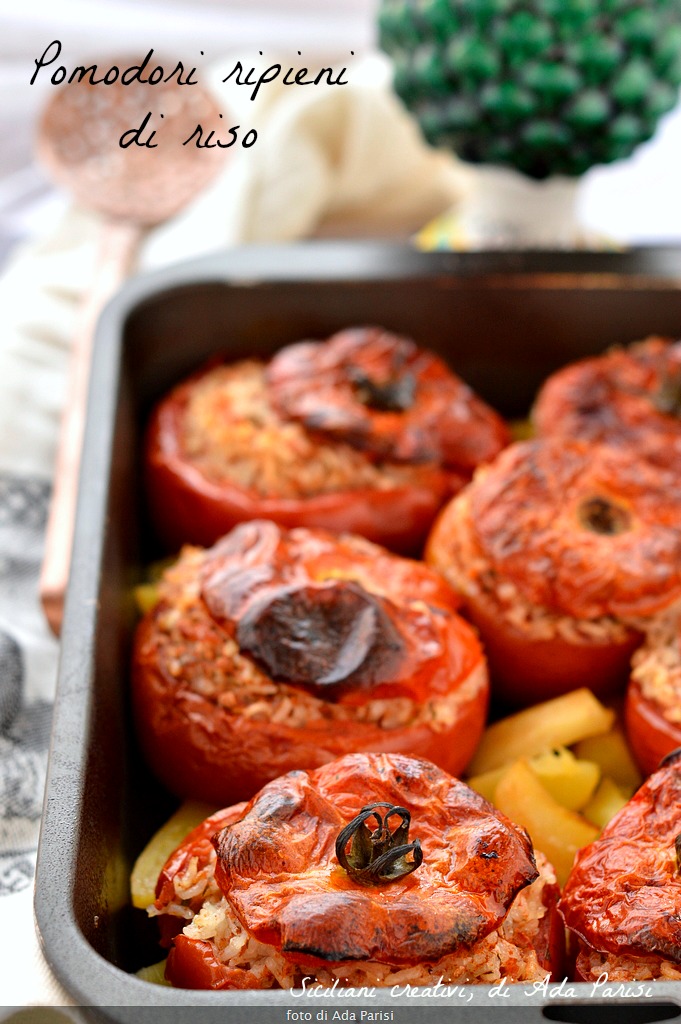 Do not put too much liquid, because the rice to cook in the oven is sufficient that which has already absorbed. Drizzle with a drizzle of extra virgin and close the tomatoes stuffed with rice with their caps. Grease and lightly salted also caps. You just have to put the potatoes in the pan, add salt and pepper and season with a little of the advanced tomato sauce.

Preheat oven to 200 degrees and bake static tomatoes stuffed with rice to the Roman for 35-40 minutes. you'll notice that, during cooking, the rice will swell and the caps will rise slightly: is normal, Do not worry.

The baked tomatoes stuffed with rice are delicious either warm or cold (do not eat them hot!) and you can also prepare them in advance and store them in the refrigerator for one or two days. Bon appétit!

MATCHING: Bardolino Chiaretto Doc brut sparkling wine, produced by Tenuta La Ca, a young winery led by brothers Peter and Aldo Giambenini. The name "La Ca" it means "home", that Aldo and Pietro means tradition and future at the same time. The sparkling wine is very fresh, acidulo, well balanced, with beading and delicate hints of red fruit, like the pomegranate, and yellow fruit such as fishing.

Hi Ada.
How beautiful !!…and they will definitely be as exquisite as all the other recipes :)
Thanks Ada.
Alexander :)

Very delicate and very summer, I love them.
Thanks
A big kiss