Tomato confit: how to prepare and store 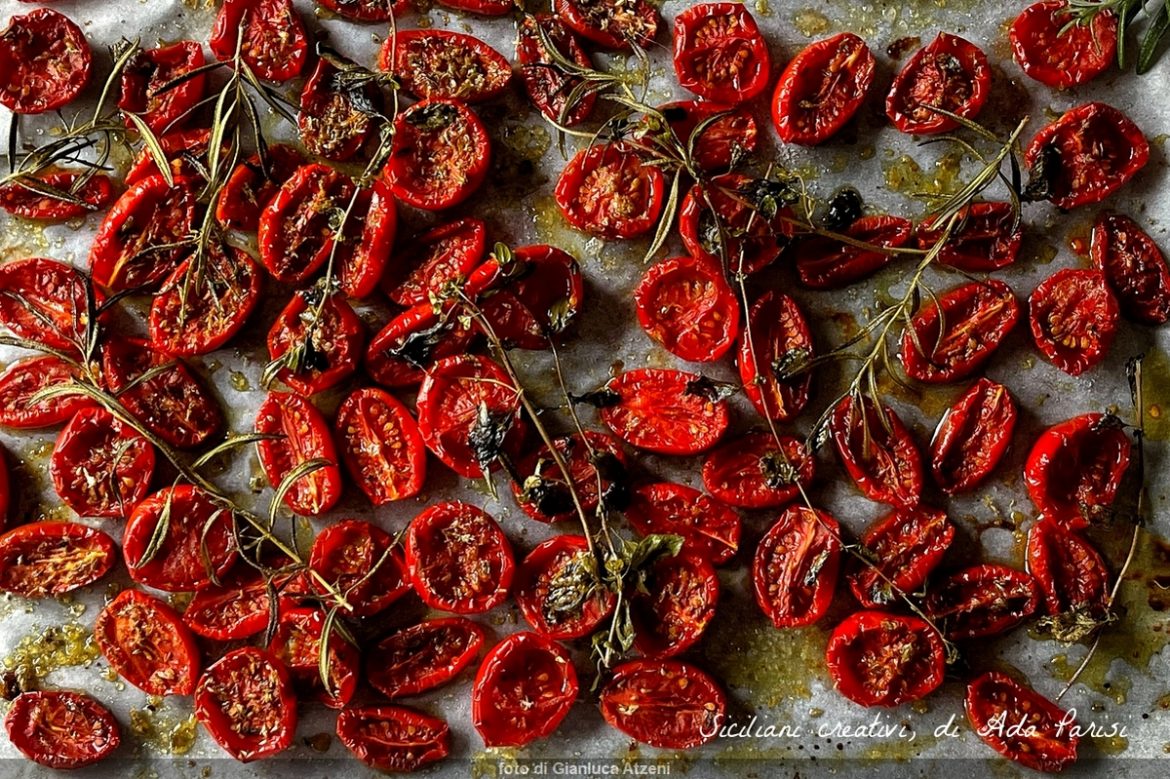 Today the recipe of confit tomatoes: here's how to prepare and store. For me it is essential, both as a seal of the dishes, with that their wonderfully intense color, both as real seasoning. On this site you will find dozens of recipes for appetizers, first and second that without these delicious cherry tomatoes lose their flavor. And even a simple dish such as PACCHERI CONFIT WITH TOMATOES AND BLACK SESAME They have an amazing taste, thanks to the complex taste, between the sour and the sweet, these tomatoes. The ingredients for this preparation are few and you will see that there are no doses because everything depends a little on your taste: you want them saltiest? sweetest favorite Li? With or without pepper? And what flavors do you want to put: oregano, Thyme, Marjoram? You just have to experiment. The tomato confit, both fresh and oil, are a typical summer preparation of southern Italy, as the FRESH TOMATO SAUCE, that you can consume immediately or store in various ways.

How to preserve confit tomatoes

On My Channel You Tube you will also find the VIDEO RECIPE Stepper of confit tomatoes. Prepare them is simple and I recommend you make in quantity, because cooking times are long and, with giustificherete quantities hours cooking. In addition, the confit tomatoes can be stored safely in the refrigerator for a week.

And you can also put in oil, for longer storage, Following the usual procedure. Let them cool down, put them in a jar, alternating with a few bay leaves and sage and a couple of garlic cloves, add the olive oil and close well. Boil the jars for 30 minutes, over low heat, so as to sterilize them. In principle,, plus the confit tomatoes are dry, best retain. Both oil will keep them hydrated and soft. If you like tomatoes still slightly damp, I suggest that you consume in a short time.

What use to make tomato confit tomatoes

As for the type of tomatoes, I usually use Piccadilly tomatoes, in datterini, the cherry or the Pizzutelli. Tomatoes of medium-small size which have an optimal balance between pulp and water content. But you can also use tomatoes bigger size, obviously lengthened accordingly the cooking time.

If you like, half cooked, you can sprinkle the tomatoes with a pinch of bread crumbs: It is not the traditional recipe, but it's a touch crunchy and tasty treats that can be useful in some preparations, especially for pasta. In this case you can not keep them in oil. With confit tomatoes can also make a sauce, passing them to the blender and then seasoning them with a thread of extra virgin olive oil: the tomato sauce will be more tasty and I mean you've ever tasted.

Cooking should be done in the oven at 100 degrees for 3 hours or more, until the confit tomatoes have not reached the consistency you prefer: more or less soft. I like well-cooked, because they develop a more strong acidity, but the cooking level also depends on what you will have to make. To shorten a little cooking time, you can get to a maximum of 120 degrees. 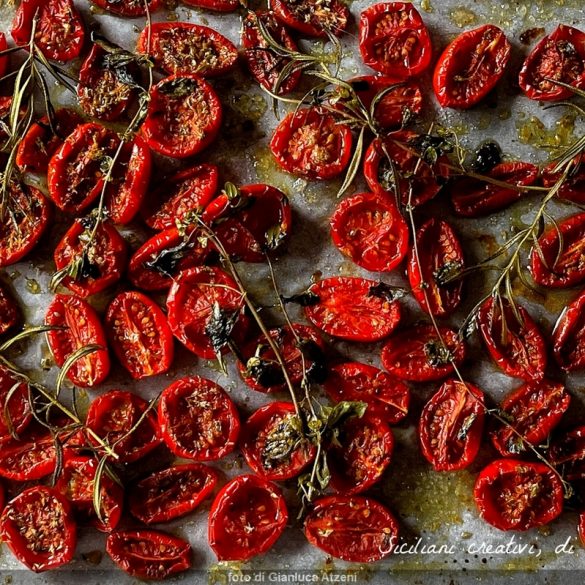 TOMATO CONFIT: HOW prepare them and conserve 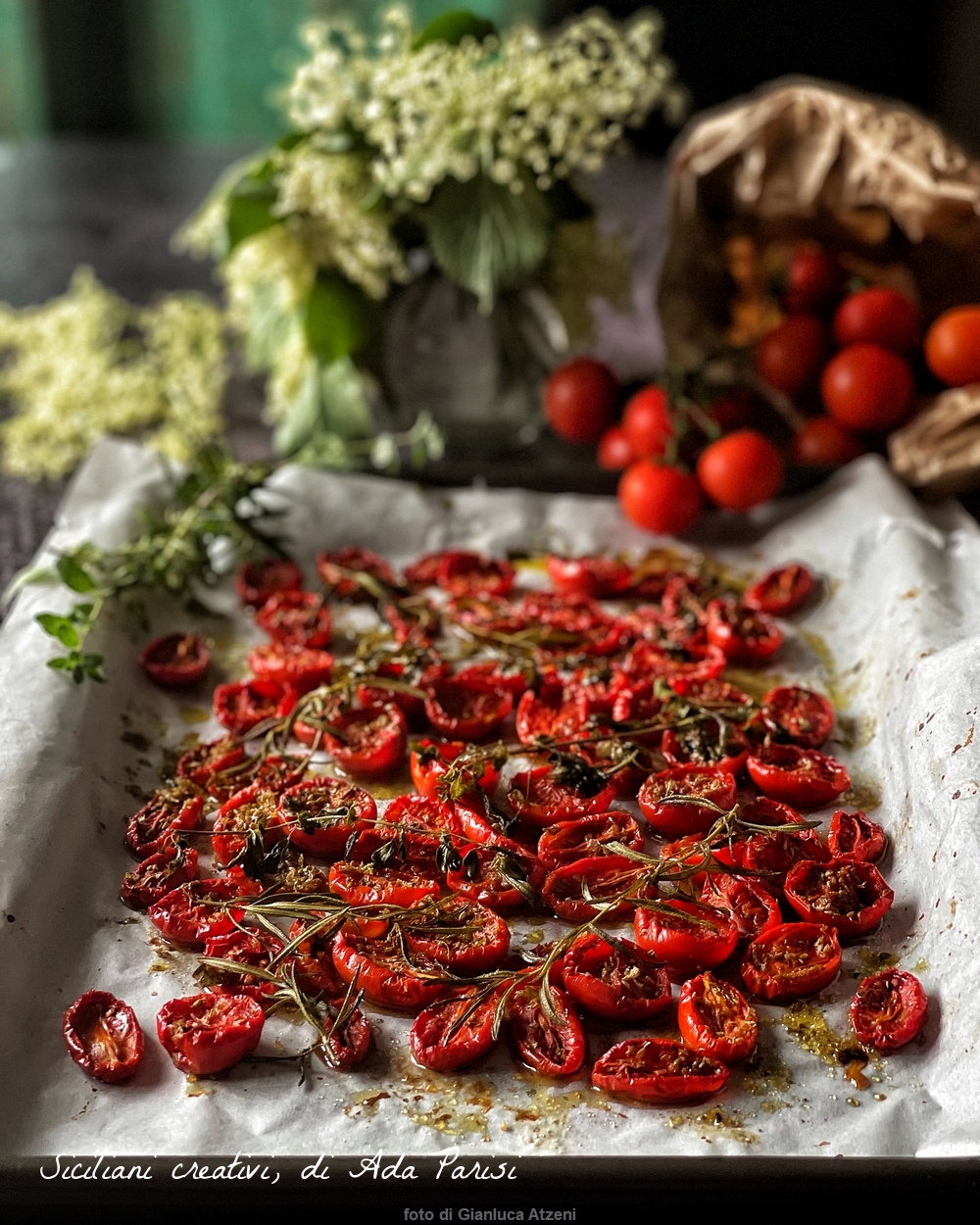 Preheat the oven at 100 degrees. Wash the tomatoes, dry them, cut them in half and arrange them on a baking tray lined with parchment paper and greased with a little oil. Sprinkle with sugar and salt. Then distribute the tomatoes herbs of your choice: inevitable thyme, Marjoram and oregano.

But I also like to add a sage and a few pieces of bay leaf. Cook the tomatoes bake for at least three hours or until the tomatoes will not be withered. During this time, Herbs can become very dark, Do not worry: removed at the end of cooking.

If you want, you can add a little grated bread, After the first hour of cooking, by spraying again the tomatoes with a little oil. In this way you can use it, For example,, to season a dry pasta. If you add the breadcrumbs, though, you can't put the tomatoes confit in oil and you'll have to consume them in 4-5 days at most.

HOW TO CONFIT TOMATOES

You can refrigerate them in an airtight container for 4-5 days. If you want to keep them longer, you can put them in the underlio: In this case, you have to carefully sterilize the jars as explained by the Ministry of Health in the Guidelines on preparing homemade canned food (on page 76 you can find the rules for the subsolio), fill the jars with cold cooked tomatoes and herbs, add the oil so that there are no air bubbles left and boil the well-closed jars to pasteurize them.