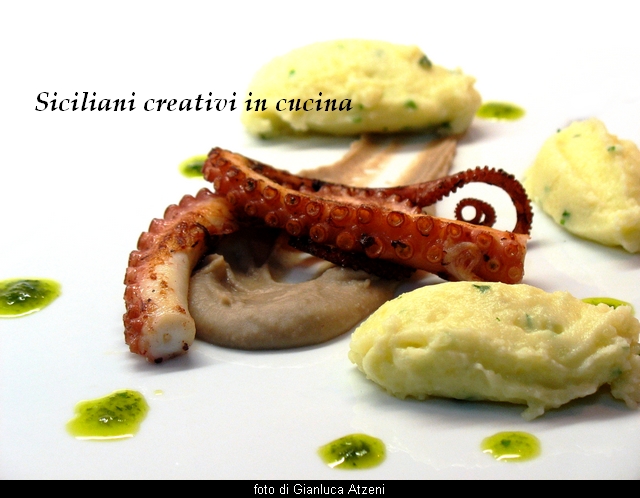 Roasted Octopus with beans and potatoes with cheese: today a simple dish but, If you love the Octopus, I'll definitely. Among all RECIPES WITH THE OCTOPUS This is perfect for a special appetizer. Is’ a great alternative to the traditional Octopus with potatoes and parsley, or that all'algherese with tomatoes and onion or OCTOPUS IN TOMATO SAUCE. The combination of the octopus with beans and potatoes is very tasty, like all the dishes where vegetables of the earth mingle with fish.

In this recipe, the octopus, first boiled, It is then grilled on a hot plate and oiled and made crisp, lying on a bed of creamy white beans, accompanied by potato quenelle and pecorino and parsley oil. I prepared as an appetizer at a dinner with unexpected guests. I had only one octopus, bought for me and Laurie, and I made a virtue of necessity in order to be able to serve two tentacles in Diner. If you also like the octopus over octopus, take a look at my VIDEO RECIPE OF THE octopus LUCIANA on my YouTube channel.

Indeed, if you were to prepare the roasted octopus with bean and potato cream, for which only serve the tentacles, remember that with the head, finely chopped, you can prepare a wonderful RISOTTO OCTOPUS. And now I bid you good day and remind you that you can also follow me on Instagram and Facebook, as well as on my YouTube channel. You will be well up to date on all of my recipes and my activities.

ROASTED OCTOPUS WITH CREAM OF BEANS AND POTATOES 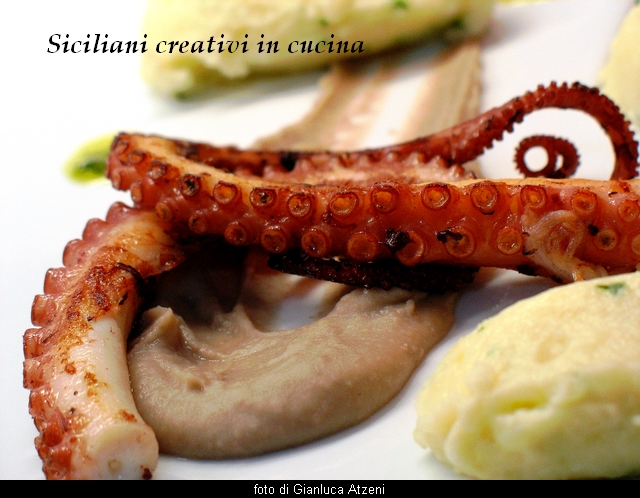 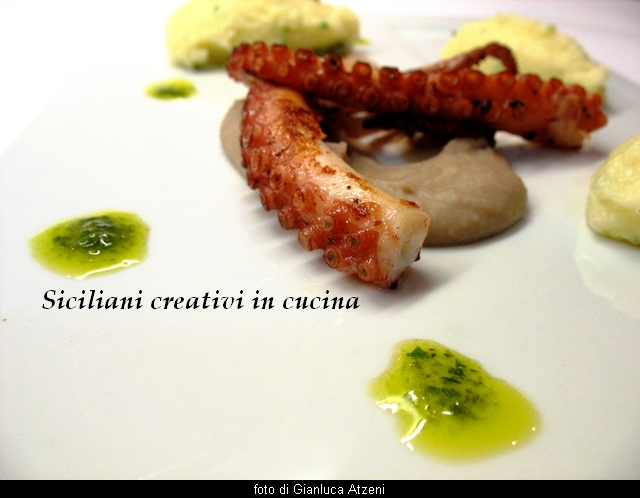 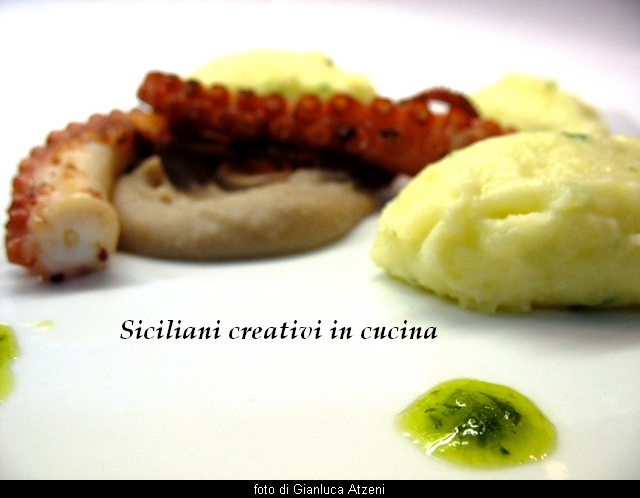 Boil the Octopus in water with a piece of onion, one of carrot, one of celery and bay leaf: I put it in cold water and I do bake about 45 minutes after the boil. Then let it rest in its cooking water until.

Cook the beans with the remaining bits of carrots, onions and celery in unsalted water and, When cooked (about 50-60 minutes because they must get pretty soft) season with salt. Drain the beans and vegetables, setting aside the cooking water, and pass them to the mixer adding a drizzle of extra virgin olive oil and lots of cooking water how much it takes to get a cream of the density that you prefer. You can make it more fluid, as if it were a zuppetta, or more dense as a sauce. The choice is yours. Adjust salt and pepper at the end.

Boil the potatoes in salted water, Peel them, mash with potato masher. Put them in a saucepan with the butter on low heat, season with salt and pepper and add as much milk as needed to obtain a smooth, homogeneous and appriciated, then sprinkle with pecorino.

Clean the parsley by removing the stems and mix the leaves with a little extra virgin olive oil. until you get a bright green compound. When the Octopus will be cold, cut the eight tentacles and smeared with oil, then roast on Grill toasty stirring each side until the surface becomes crispy.

Put on the bottom of the pot one tablespoon of cream of cannellini beans, lay two roasted Octopus tentacles and train alongside the Octopus two quenelle of mashed potatoes and pecorino (take a spoonful of the mixture with a spoon and, with the aid of another Spoon into a rotary movement formed the quenelle). Season with parsley oil and some Maldon salt crystal and serve. Bon appétit!

MATCHING: We tried to match this recipe a wheat beer. We chose the Open White, the brewery Baladin in Piozzo (Wedge): dense foam and soft, scents of citrus and coriander notes, good balance of bitterness (hops and gentian root) with the taste of the beans and the flavor of the potatoes with cheese. Altogether it is a pleasant feeling of freshness beer capable of restoring that make it suitable as a simple appetizer.

Here's a way to serve the Octopus that really attracts me, I love him very much and this posh dress suits him

Hello Lara, good to see you here! Also I love the Octopus anyway, every so often I like to change as the usual salad! Thanks and good Sunday!

Hello, interesting recipe to try! Cooking a bit long for the summer!!! But this year can do.

Hi Elizabeth! Yes you have to bake potatoes, beans and Octopus separately, but then the beans just processing them and potato mash… It is also true that the temperatures (Unfortunately) I'm not so hot that we desist from cooking!!! Thanks and see you soon! ADA