Baked meatloaf Sicilian style, stuffed and accompanied by perfect potatoes, with crisp, golden crust. One of the most beloved meat seconds of Sicilian cuisine, which is rarely found at the restaurant. Sunday lunch, Winter, Sicily, whole day: after ragout timbale anelletti active in the table stuffed meatloaf and baked in the oven of the mother, with a flood of baked potatoes. Is’ just that you should imagine the Sicilian Sundays of my life, or at least those winter. On my YouTube channel you can also find the VIDEO RECIPE Stepper baked meatloaf Sicilian. Because I know I roll the meat loaf can be scary and, seeing, you will have no more doubts.

The sicilian baked stuffed meatloaf is a soft casket of minced meat 'cunzata’ or well-seasoned, that encloses bacon, whole hard-boiled eggs and lots of stringy cheese. The meatloaf is baked in the oven and, by tradition, It is accompanied by baked potatoes with plenty of rosemary and black pepper.

The alternatives in terms of rolled and stuffed with meat

This version is still my favorite, but also take a look to the recipe of MEAT ROLL SAUCE or, On the subject of seconds stuffed Sicilian dishes, at Falsomagro VEAL STUFFED, all’ROLLED PORK AND ARTICHOKES, the legendary Falsomagro TO PALERMITANA and all’ROLLED RABBIT STUFFED SICILIAN.

The baked stuffed meatloaf is yummy freshly made, with cheese spinning, But it's amazing cold, accompanied by a mixed salad. The filling of this meatloaf is the classic version, the everlasting, but you can pick and add spinach or chard boiled and well squeezed, or replace the bacon with another type of salami, or stuff the meat loaf with a thin omelet instead of the boiled eggs. And now I bid, As always, Have a nice day. 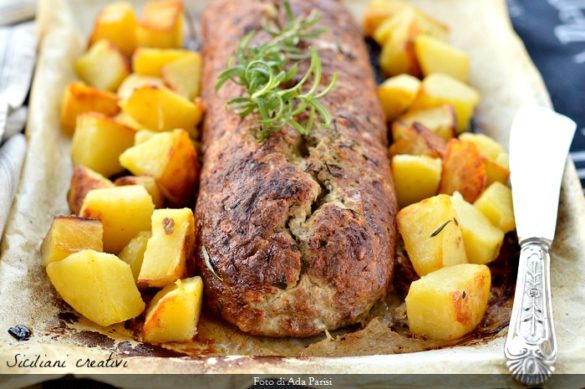 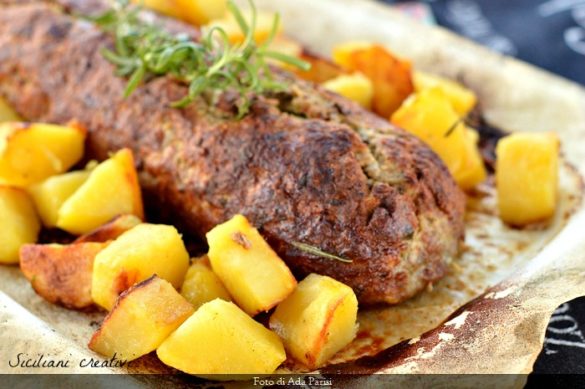 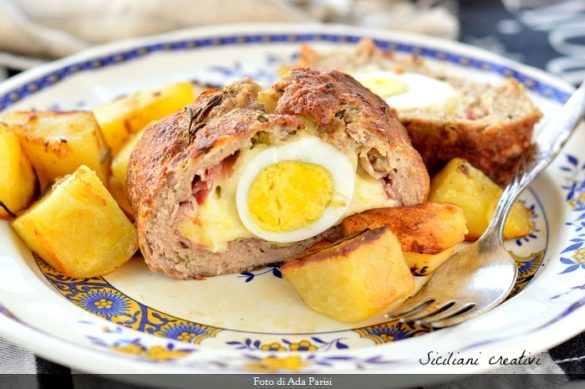 800 grams of ground mixture of beef and pork

300 grams of cheese or provolone unripened 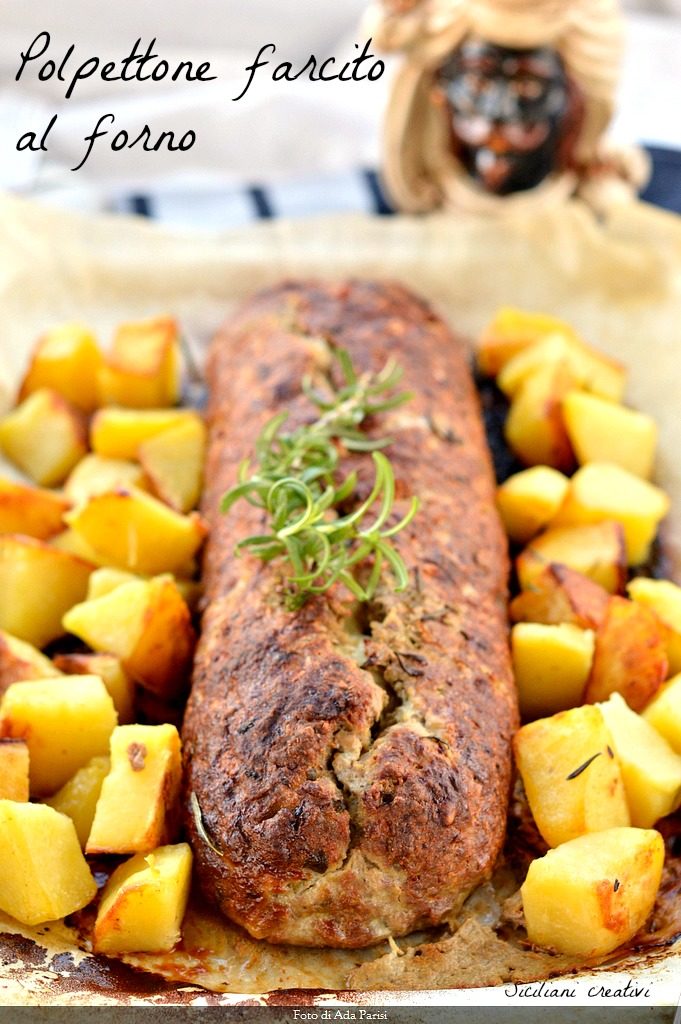 Before preparing the meatloaf stuffed in the sicilian oven look carefully at the VIDEO RECIPE step by step, where you will see the whole process. First of all, place in a bowl the minced, the bread or bread soaked in milk box (or in the water) and wrung out, the onion grated or finely chopped, Parmesan cheese and grated pecorino, chopped parsley and eggs. Season with salt and pepper and mix until you get a homogeneous mixture.

When the ground is well seasoned, spread on a sheet of parchment paper around the ground, up to form a rectangle of about one centimeter and a half of a thickness. Covering the surface of the rectangle with the bacon coppata, leaving two centimeters along each edge. Then spread on the surface of the cheese cut into thick slices and then to have the center boiled eggs, lined up one after the other the entire length of the meatloaf, as you see in VIDEO RECIPE.

Preheat the oven to 180 degrees static. While the oven heats up, unroll the baking paper and grease the meatloaf abundantly with the extra virgin olive oil. Arrange over one or two sprigs of rosemary and bake for 45 minutes or until the surface of the loaf will not be well colored. 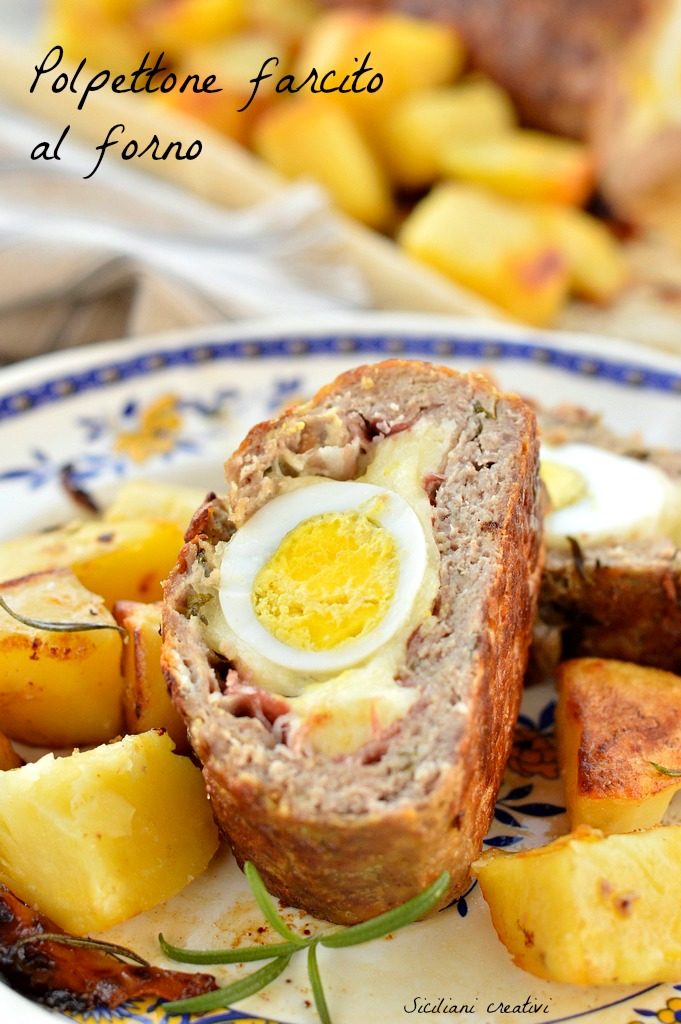 I suggest you serve the meat loaf stuffed Sicilian, simply baked potatoes, dressed with extra virgin olive oil, Salt, pepper and Rosemary: You must cook the potatoes in a separate pan and, only in the last 10 minutes, when they are already cooked, add them to the pan of meat loaf, so they will infuse the sauce and the taste of the meat. Serve the meatloaf stuffed Sicilian after having done it stand for 10 minutes, so that it remains compact but the cheese melted. And Bon Appetit!

A COUNCIL: The stuffed meatloaf Sicilian is also delicious cold or heated in the oven or in a pan with a little butter. We do a straight by real gourmands: in family, when advancing the cut in slices and put it between two slices of bread with a little 'mayonnaise. A delight!

MATCHING: "Barbazzale", Etna Doc White, vintage 2017, produced by Cottanera cellar, in the village of Castiglione di Sicilia. A volcano wine, that smells of citrus and white flowers. Excellent in pairing with eggs and potatoes, this Sicilian wine accompanies this recipe with extreme delicacy, allowing full exploitation of the flesh.

Hello, I would like to serve for Easter dinner, I prepare it the night before and bake the next day, or me does not recommend? Thanks in advance

Hello Clare, It is a great choice for Easter dinner. But I do not recommend to do it the day before because the ground tends to blacken. At most, you can boil the eggs and cold cuts and cheese. It is not too long to do, you should get by in 15 minutes Happy Easter. Let me know

Is’ a recipe of my mom, I would be honored if you tried the. I embrace you. ADA

How wonderful. I immediately thought that my grandmother did to bruciolone. That was, however,’ meat and gravy. I'm already’ the scent.

You know that we are also a version with tomato sauce? I think I have also put the link in this recipe. Is’ yummy. A bit’ more complex because you have to brown and the operation is delicate, but I love it. And the sauce with the pasta is amazing. Kisses, ADA